The golf world, like the world in general, is complicated these days. Enjoying the game, however, is still simple. (Playing it perhaps not so much.) To help golf lovers maximize their enjoyment while on the road, author Stefanie Waldek has compiled 150 Golf Courses You Need to Visit Before You Die. Released by Lannoo Publishers, the book lists 150 courses around the world and provides information about ‘em as well as the reason why they are a bucket-list-worthy destination. To give you a taste of the book with some international flavor, we’ve compiled 15 of Waldek’s selections and included a snippet of her thoughts as to why they made the cut. CAPE KIDNAPPERS, New Zealand. The back nine is built on top of precipitous “fingers” of land that stretch out some 460 feet above the sea.

Waldek says: “Designer Tom Doak set the back nine holes atop narrow slivers of land, between which are steep cliffs that drop 460 feet into Hawke’s Bay. This course is not for the faint of heart, although admittedly it appears far more intimidating from the air than it does from the fairways or greens.”

MARRIOTT MENA HOUSE GOLF COURSE, Egypt. You’ll be golfing next to the Great Pyramid of Giza.

Waldek says: “The historic Marriott Mena House hotel that abuts The Great Pyramid of Giza, the only one of the Seven Wonders of the Ancient World that exists today, is home to a nine-hole course that was originally built in 1899. While the course isn’t the largest or most challenging in the world, it is certainly in one of the world’s best locations.” 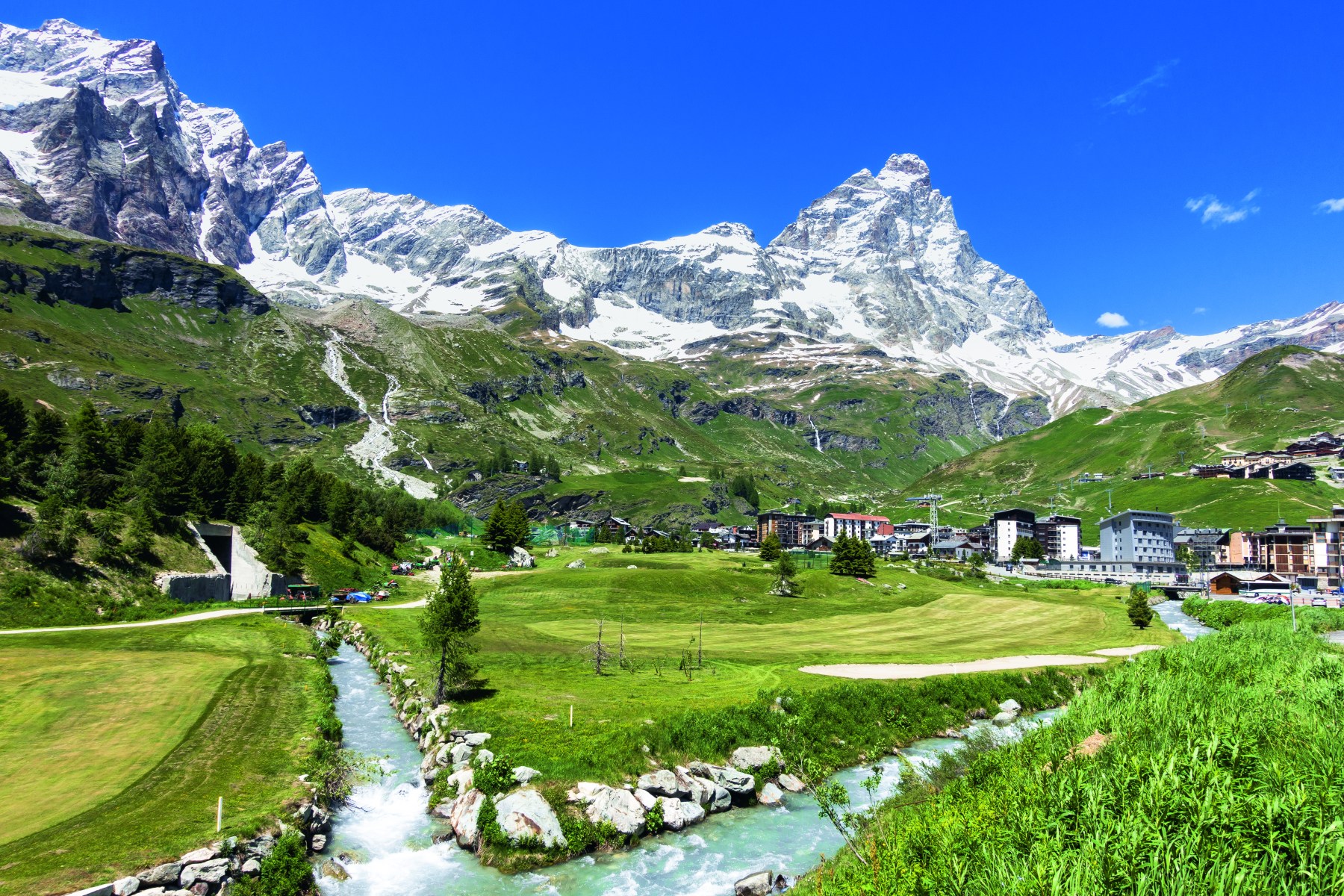 CERVINO GOLF CLUB, Italy. The iconic Matterhorn watches your every swing at this Alpine course.

Waldek says: “Italy’s Cervino Golf Club is at an elevation of more than 6,700 feet, set in the shadow of the Matterhorn (known as Cervino in Italy). Keep an eye out for marmots as you play and try not to channel your inner Bill Murray à la Caddyshack.” COOBER PEDY OPAL FIELDS GOLF CLUB, Australia. There’s no grass at this unusual course, which is the only one in the world to have reciprocal rights for its members to play at the Old Course at St. Andrews in Scotland.

Waldek says: “Coober Pedy is a rather unusual place for a golf course, but the local residents — many of whom live underground to escape the heat — have built their own grass-free golf course. It is played during the cooler winters or on summer evenings. Instead of fairways, it has white sandstone and instead of greens, it has scrapes made from a mixture of quarry dust and waste oil.”

Waldek says: “Diamante Cabo San Lucas’ Dunes Course, is one of the most highly ranked in Latin America. There’s the bright green of the grass, the deep azure of the sea, the pale blue of the sky and the stark beige of the sand dunes, which all together make for one beautiful golf course.” 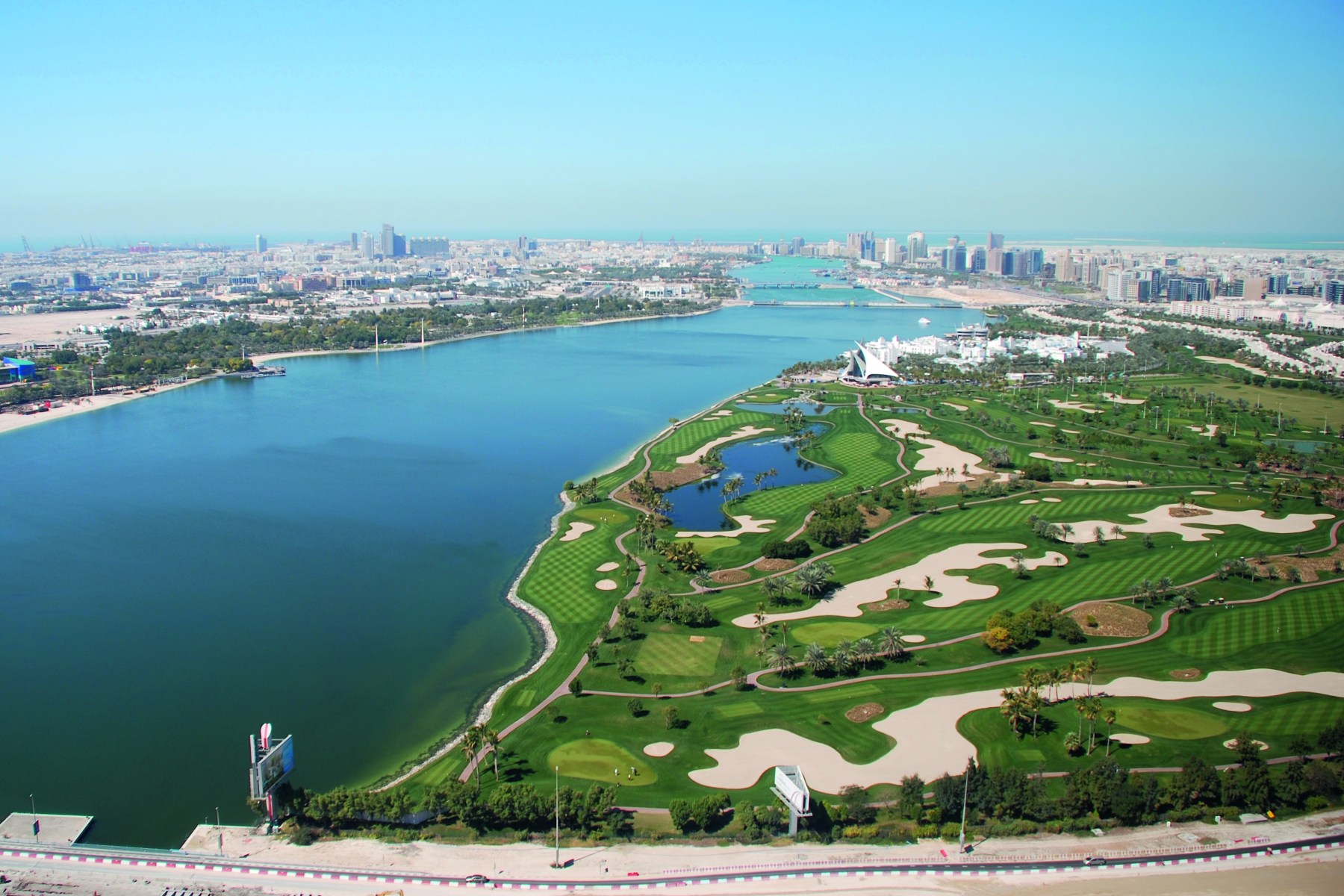 Waldek says: “For a desert golf course, it’s unusual that water plays so prominently in the design. But that’s exactly what happens at the club’s Championship Course. The eponymous creek affects four holes — including the sixth, where golfers must tee off from a platform on the water. Artificial lakes add to the difficulty of other holes.” 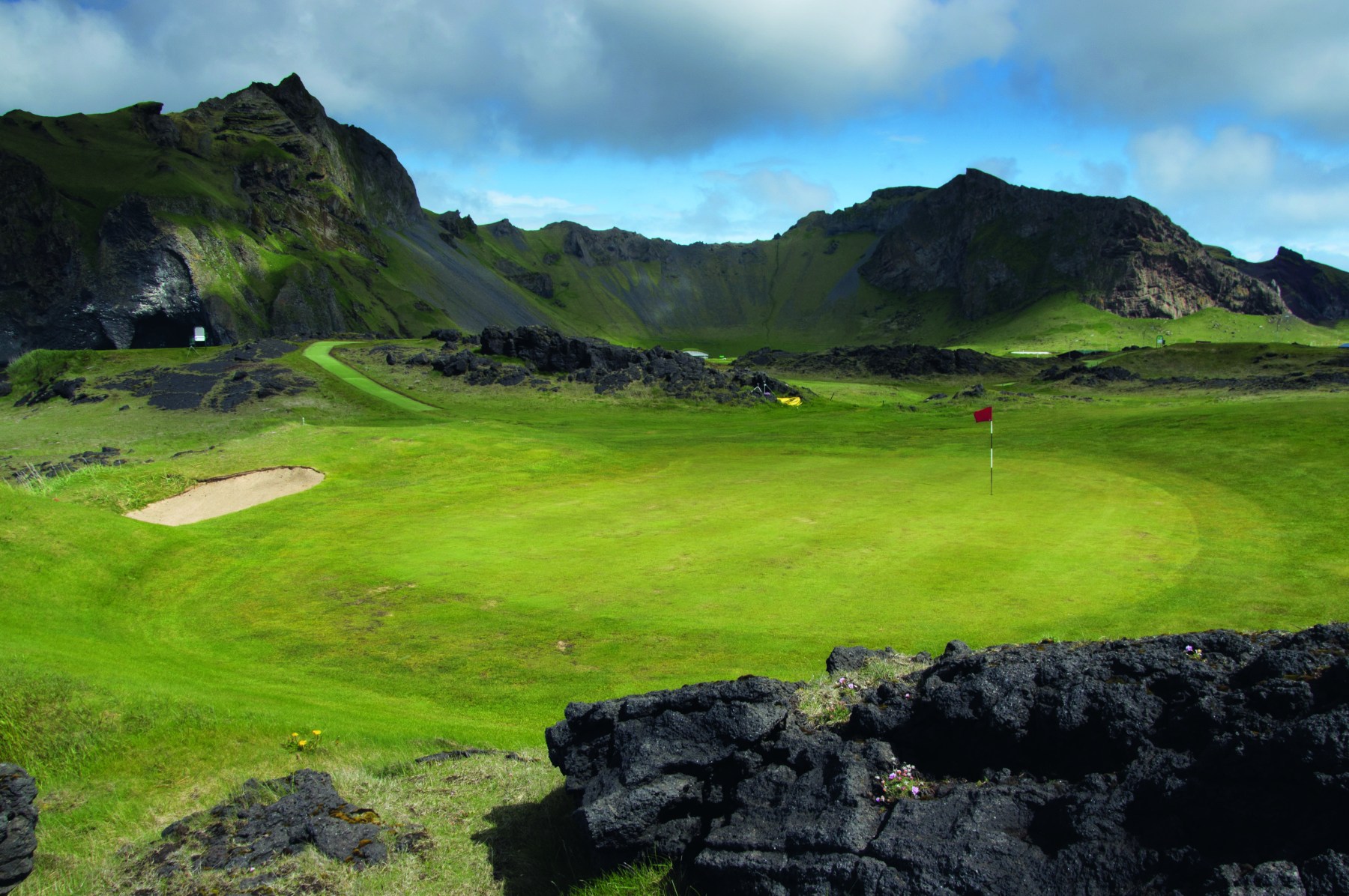 Waldek says: “Iceland is the land of fire and ice, but when you’re golfing at the Westman on Heimaey Island, it’s definitely more fire than ice. Or at least it used to be — the course is built into an old volcano. But don’t worry, it’s extinct, so you probably don’t have to worry about any lava hazards. A neighboring volcano on the island did erupt in 1973.” 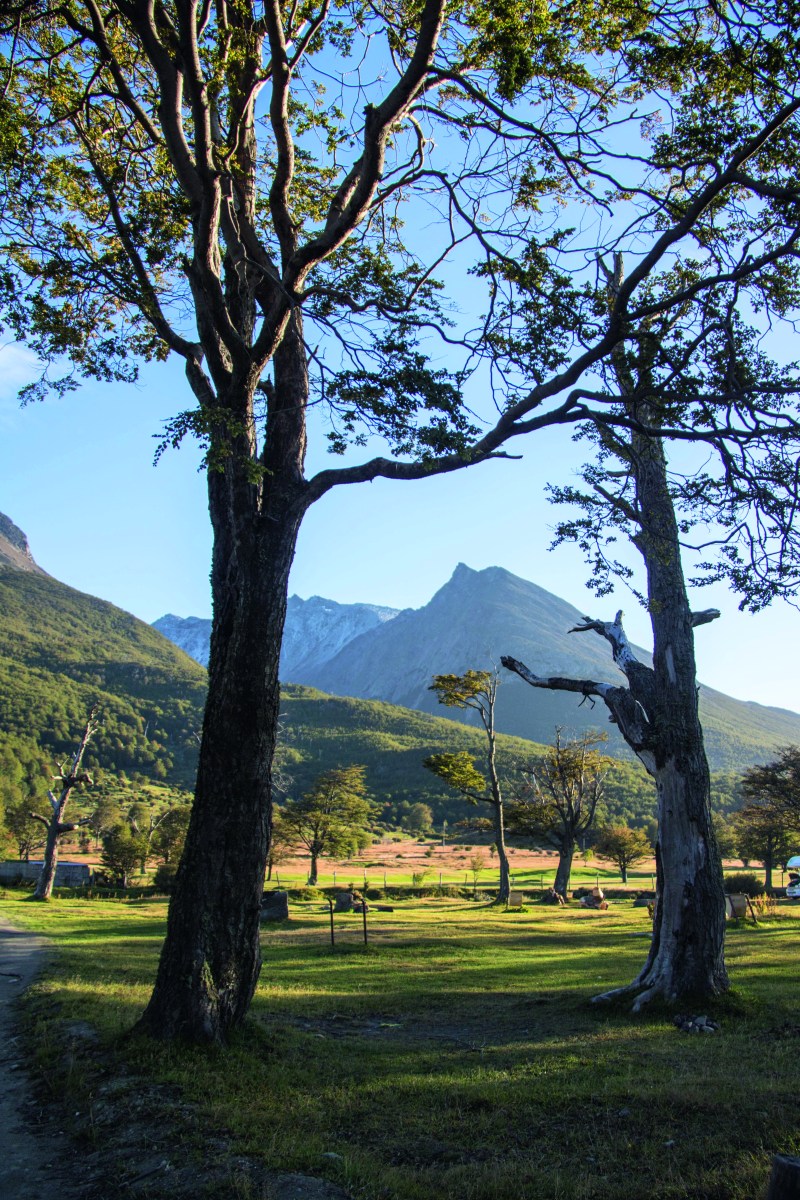 USHUAIA GOLF CLUB, Argentina. This is the most southerly golf course in the world.

Waldek says: “Located on the edge of Tierra del Fuego National Park in Argentine Patagonia, the nine-hole Ushuaia Golf Club is the southernmost golf course in the world (excluding the makeshift courses in Antarctica run by research station staff).” 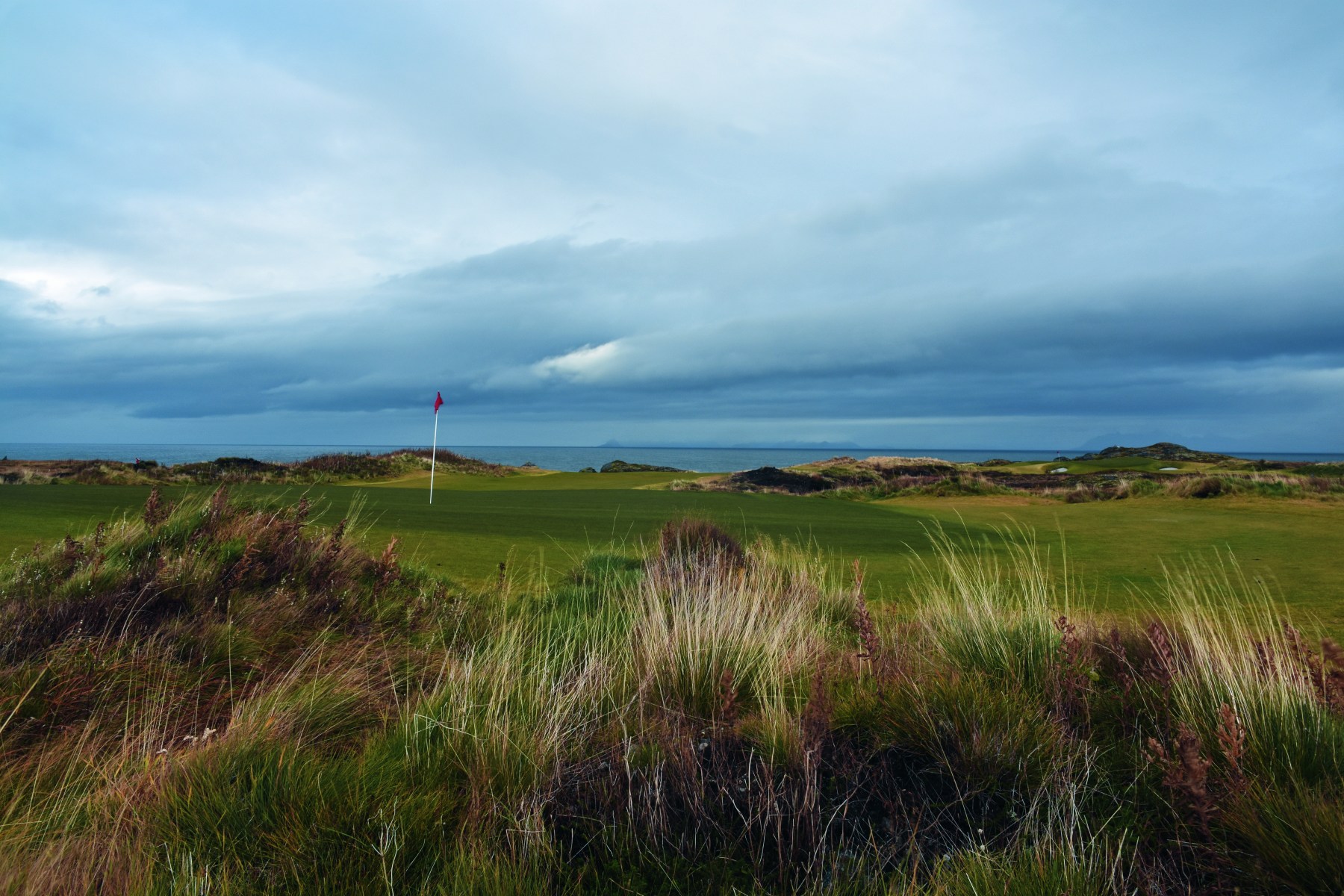 LOFOTEN LINKS, Norway. The Midnight Sun and the Northern Lights are both visible here.

Waldek says: “This is one of the northernmost golf courses in the world at 68 degrees north, meaning you can play for 24 hours in the summer and potentially see the Northern Lights in the fall. The course is open only from the end of May to mid-to-late October.” 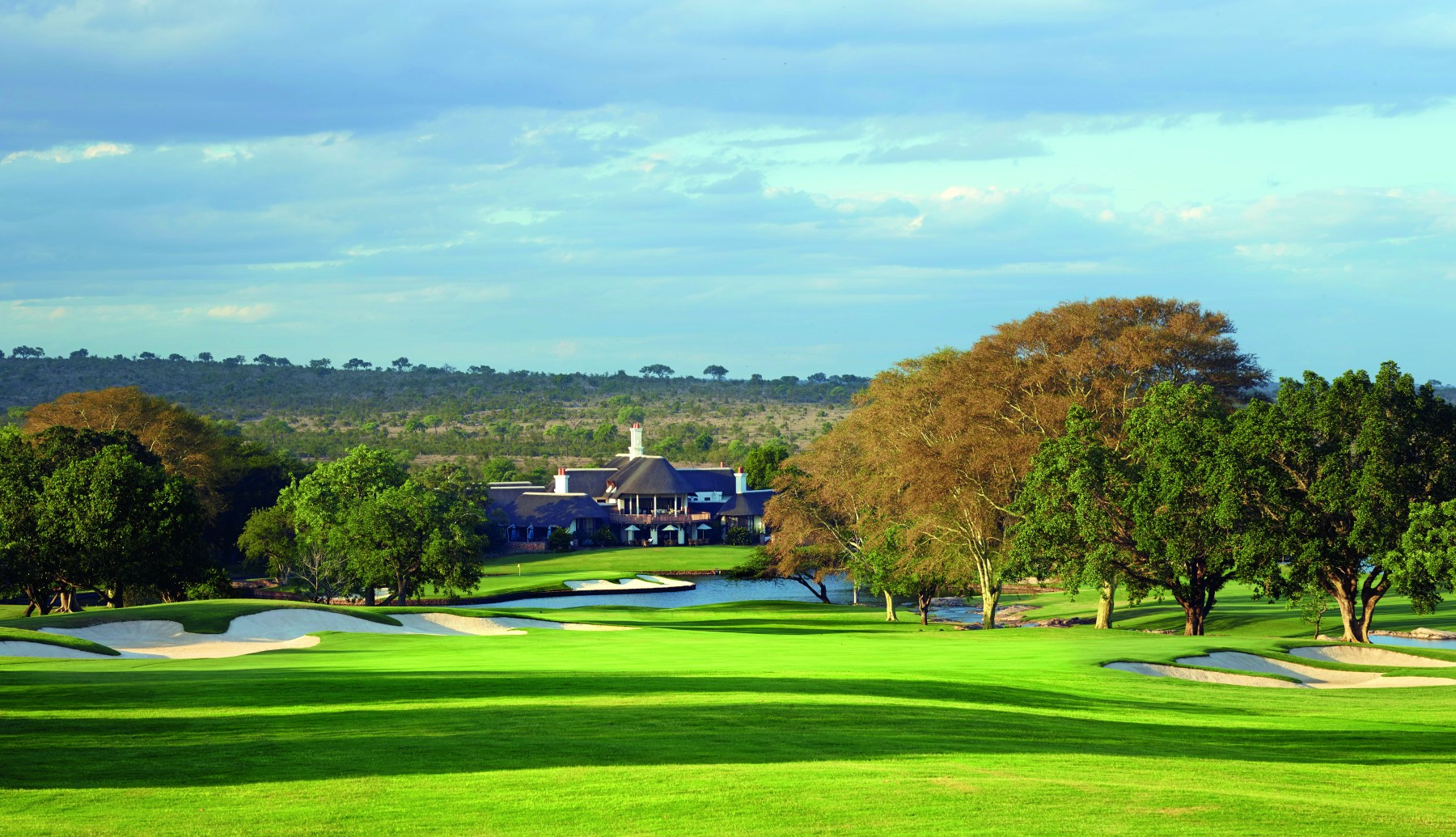 LEOPARD CREEK COUNTRY CLUB, South Africa. You may see crocodiles or hippos as you play.

Waldek says: “Don’t let Leopard Creek’s name fool you — you’re golfing alongside the Crocodile River that borders Kruger National Park and you’re far more likely to see the aquatic giants than the elusive cats. Hippos, too, are a fan of the river here, especially near the green at hole 13.” 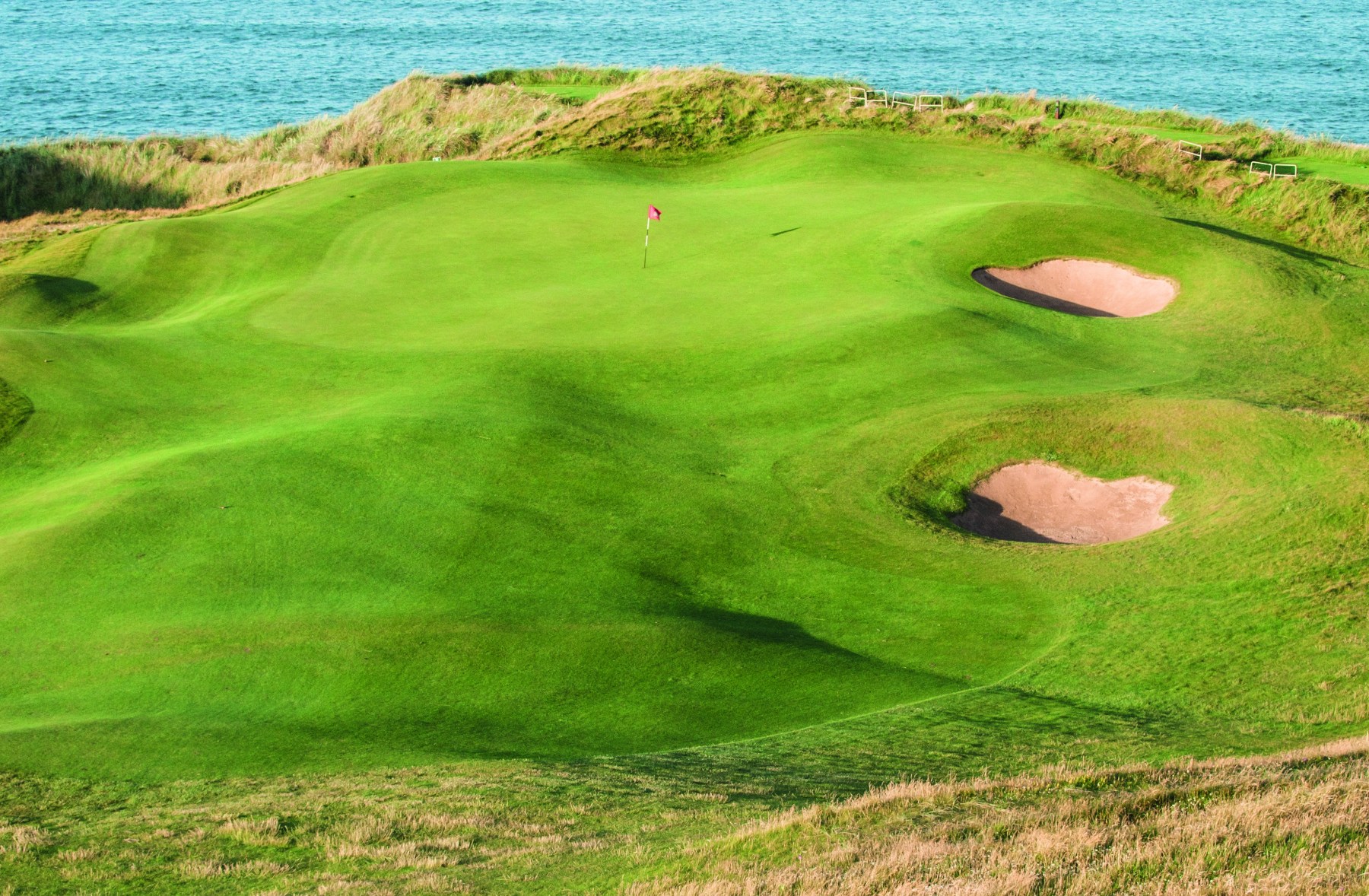 Waldek says: “One of the most interesting quirks about Lahinch’s Old Course is its herd of weather-predicting goats. According to Club lore, the goats helped golfers anticipate the weather conditions: If bad weather was brewing, the goats stayed close to the clubhouse, but on fair days they’d roam out to the course.” 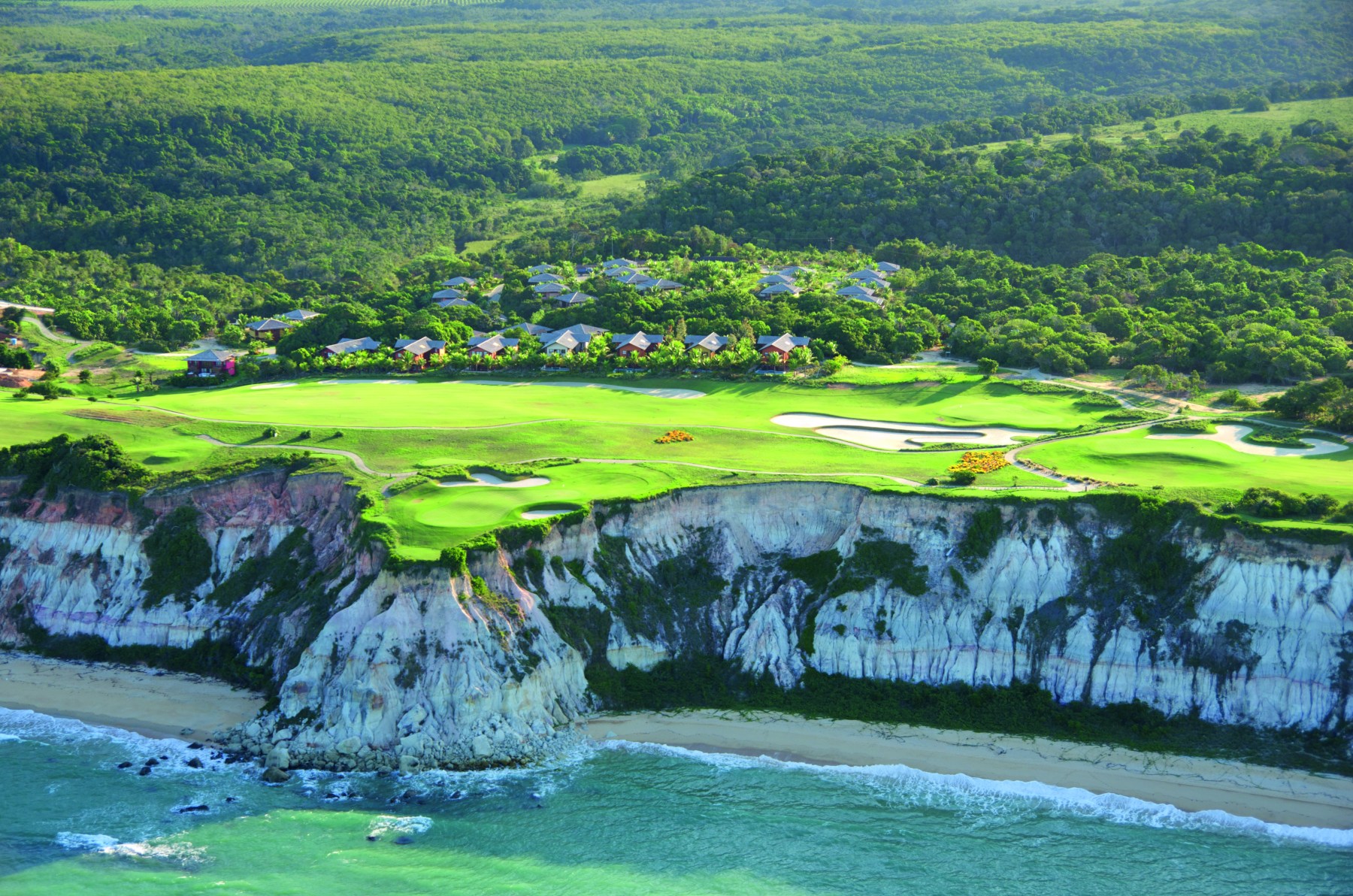 Waldek says: “Terravista in jet-set chic Trancoso allows golfers to enjoy two of the country’s most scenic landscapes: The rainforest and the beach. Four holes abut 150-foot-tall cliffs overlooking the Atlantic; the particularly picturesque hole 14 is the standout as it’s set on a section of the cliffs that juts out over the beaches below.” 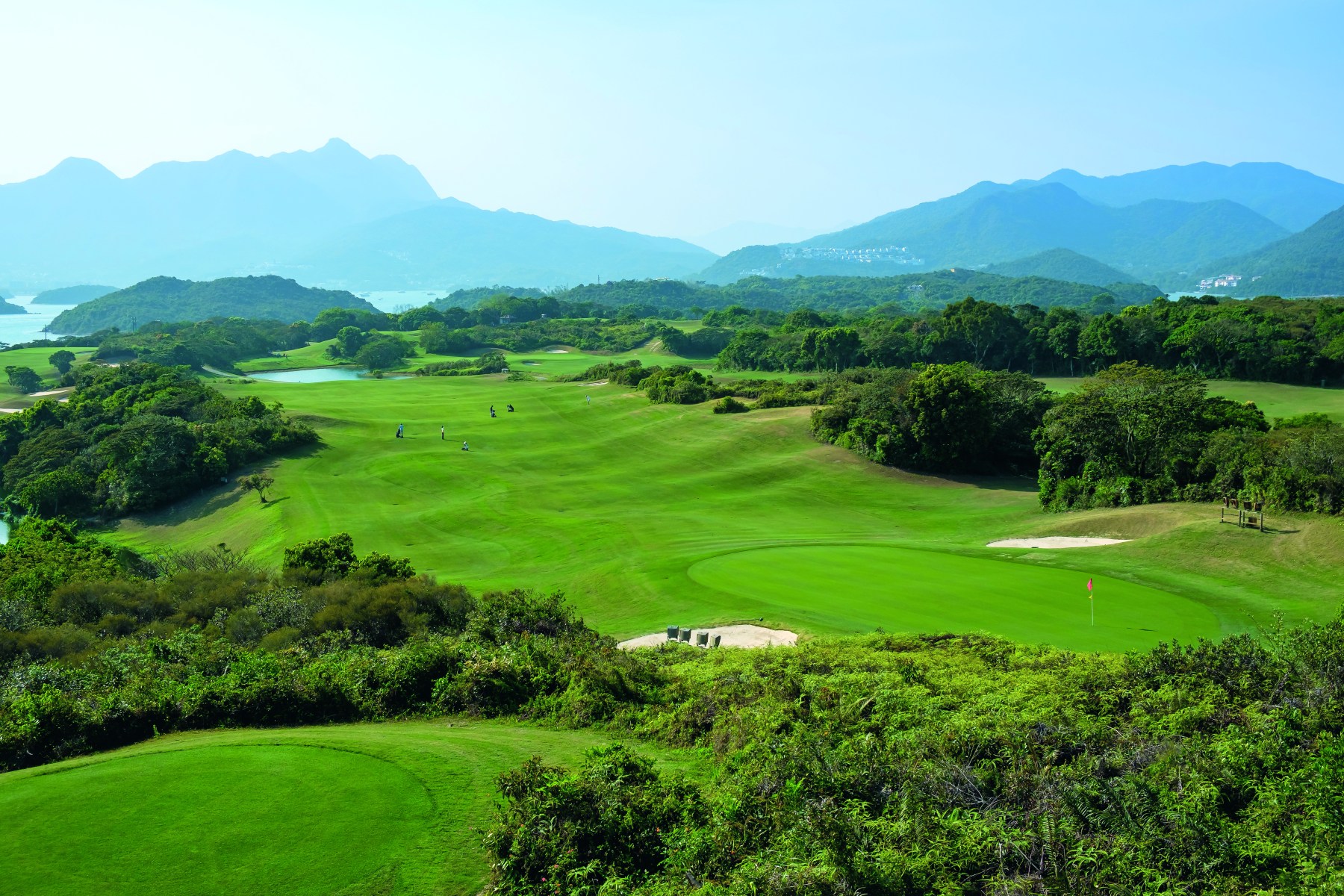 Waldek says: “Opened in 1995, the Jockey Club Kar Sai Chau offers three public golf courses, but it’s notoriously difficult to score a tee time. Why? Well, as the only public courses in Hong Kong, they are in high demand.”

GOLF D’ÉTRETAT, France. Many golf courses are built atop cliffs, but not cliffs like these.

Waldek says: “At Golf d’Étretat in Normandy, the 10th hole is a stunner. The coastal town is known for its white chalk cliffs facing the English Channel, and the hole plays right up to them. The course suffered during World War II when its fairways and greens were filled with landmines.” 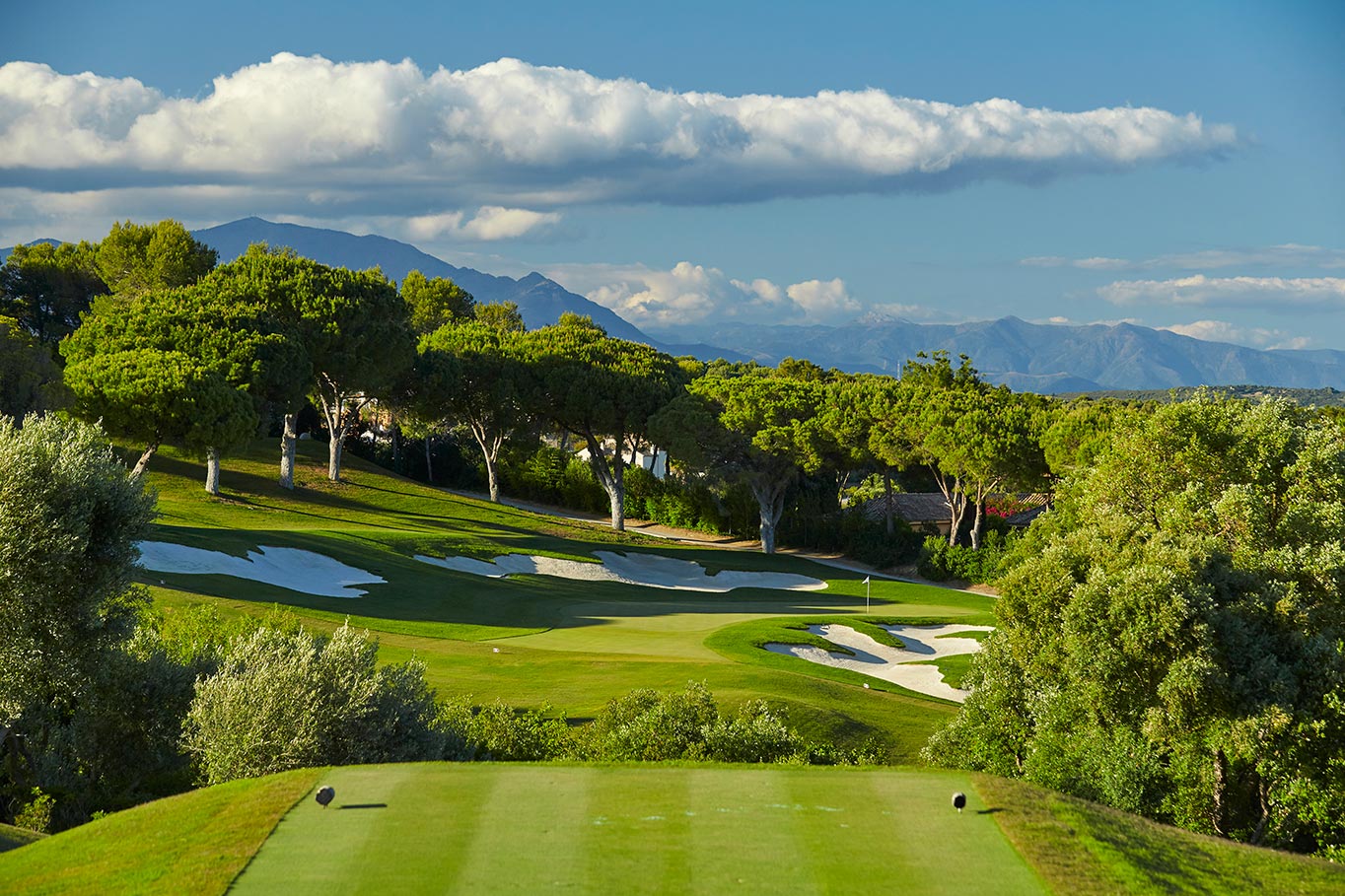 REAL CLUB VALDERRAMA, Spain. This is the crown jewel of European golf courses.

Waldek says: “The course has hosted a number of tournaments, including the 1997 Ryder Cup, and club membership is highly exclusive, but Valderrama can still be played by visitors nonetheless. Valderrama received royal status in 2014 from the Spanish monarchy.”
Sports

The golf world, like the world in general, is complicated these days. Enjoying the game, however, is still simple. (Playing it perhaps not so much.) To help golf lovers maximize their enjoyment while on the road, author Stefanie Waldek has compiled 150 Golf Courses You Need to Visit Before You Die. Released by Lannoo Publishers, the book lists 150 courses around the world and provides information about ‘em as well as the reason why they are a bucket-list-worthy destination. To give you a taste of the book with some international flavor, we’ve compiled 15 of Waldek’s selections and included a snippet of her thoughts as to why they made the cut.