Already have a favorite Chicago dog spot? We've got other recs.
LauriPatterson via Getty
By Danielle Braff @daniellebraff

I’ve lived in Chicago from the time I was a poor graduate student existing on pennies a day, through the time I was dating and not wanting to waste my money on duds (the guys, not the food). Today, I have two children, and I still hate shelling out on meals when it’s hit or miss whether they’ll actually eat the food. Fortunately, Chicago is blessed with tons of mom-and-pop dives, cheap eats and spectacular food that doesn’t cost a fortune. Here are my favorites.

This hot dog spot has a line all the time. I’ve driven past here at 10:30 a.m. and at midnight, and there are still people queuing up outside to get a taste of the old-style Chicago dog. This place has been in business since 1946, and they haven’t changed a thing. They sell a Chicago hot dog with mustard, onions, relish, peppers and fries — aka the Depression Dog. They make their hot dogs with Vienna Beef, and if you ask for ketchup, you may be kicked out (or worse). If you really need ketchup, there’s a McDonald’s next door, but the fast food giant has gotten tired of the solo ketchup requests (so sometimes they charge 25 cents). Oh, and there are no seats here. Most people eat the hot dogs in the back of their car, or on the street. It’s worth it.

The West Loop is packed with some of the best restaurants in Chicago. Randolph Street, also known as Restaurant Row, sports the trendiest and many of the most expensive restaurants in the city — except for J.P. Graziano. Open since 1937, the old-school Italian sub shop has been churning out some of the finest sandwiches very little money can buy. Our recommendation? The house specialty, which is the Mr. G: hot soppressata, prosciutto, Genoa salami and provolone. There’s often a line at lunchtime, but it goes quickly.

For a Mexican feast on a taco budget, head to Pilsen, the Mexican neighborhood where you can find tons of low-cost restaurant options. If you really want authentic Mexican fare, we’d steer you toward Carnitas Don Pedro, a restaurant that’s been a long-standing tradition for more than 40 years. Their menu is long and their lines are even longer, but it’s worth it for a table filled with every dish imaginable, including pork tacos, homemade tortillas and chicharrones. 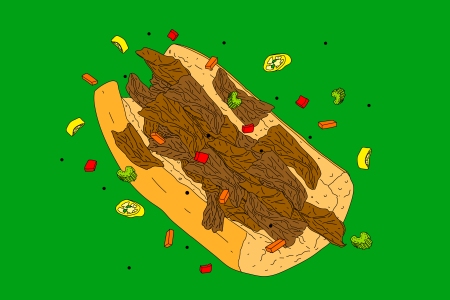 Even before "The Bear" made it a sensation, Portillo's and Emmett's were on a mission to get their signature item the recognition it deserves

Head to one of Chinatown’s oldest bakeries for prices that still feel like they’re stuck in the ‘80s (hey, we’re not complaining). They have two locations: one in Uptown and one in Chinatown, and while we’ve never tried the Uptown spot, they have the same menu. Grab a steaming hot BBQ pork bun, a cup of tea and a mango mousse cake (our favorite combo), and you’ll walk out of there with a full belly and nearly full wallet (it should cost about $5 total). We don’t know how they do it, but we never want them to stop.

You never see sushi spots on lists of cheap foods because A) ick and B) sushi is simply never cheap and good. I’ve tried supermarket sushi in a pinch, and I’ll never do that again. But this fish market somehow manages to be the sushi unicorn. In business for more than 40 years, you can get whole rolls for just $3, and you can snag the big, fancy rolls for about $8. Want a platter? A tray for one to two people is just $26. Or you can have a party: four to five people for $61. You can’t beat that with a stick.