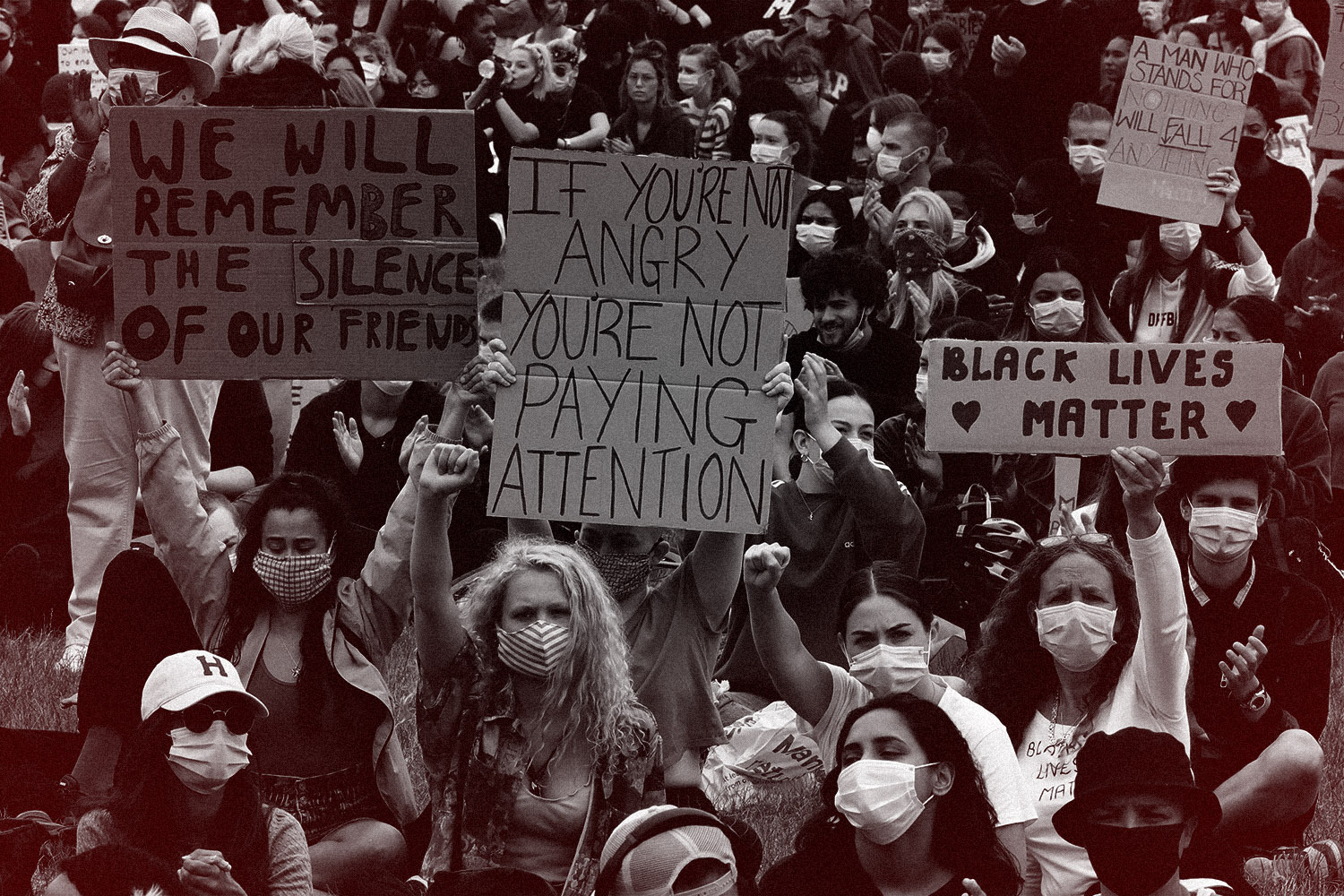 Being afraid of being "performative" isn't an excuse to do nothing.
Dan Kitwood/Getty Images
By Kayla Kibbe / June 3, 2020 1:13 pm

Sincerity is terrifying. That’s why, when confronted with sweeping displays of sincere protest and activism, members of a certain brand of cynics are often compelled to dismiss those displays as “performative” or “hollow.” It’s a way of distancing themselves from the vulnerability inherent in sincerity until they can return to the safety of their regularly scheduled irony and self-deprecation. It’s a defense mechanism. Unfortunately, like most defense mechanisms, it’s also bullshit.

I don’t think most of these people are inherently evil or callous — though, in the interest of full disclosure, I am one of them. I don’t think we’re evil. I think we’re scared. But being scared isn’t an excuse to stay silent.

In philosophy, the concept of psychological egoism holds that true altruism is impossible — that beneath every act of apparent goodwill lurks a selfish ulterior motive. For a white person of privilege then, supporting the Black Lives Matter movement right now can feel performative or appropriative, like we’re co-opting a movement to serve our own selfish agenda — whether that be gathering likes on social media, accruing good-guy clout or simply trying to assuage our own white guilt. We’re terrified of looking our privilege in the face, yes. But we’re also afraid of hopping onto the activism bandwagon and riding off into the woke sunset in an apparent attempt to escape that privilege. Why should we get to make ourselves feel better about our privilege by flaunting our activism on social media? Shouldn’t we just have to shut up and sit with our guilt as penance?

Engaging with the current movement as a white person already feels almost impossible to do “right.” Celebrities and brands who speak up are routinely mocked for making hollow, tone-deaf or bare minimum contributions, while those who remain silent are accused of upholding white supremacy. No sooner had Instagram flooded with black squares of solidarity yesterday than widespread criticism accusing the black squares of erasing the very movement they sought to promote erupted across the platform. Unfortunately, activism isn’t easy or simple. It’s not supposed to be.

Historically, however, fear of engaging with activism “for the wrong reasons” has presented a convenient excuse for white people to remove themselves from these difficult conversations. If we simply say, “This isn’t my place,” we get to humbly bow out and avoid the responsibility of actually navigating that space.

This time, those excuses aren’t cutting it. Silence is no longer a viable option. On social media, allies are calling out the silent as part of the problem — and not just silent celebrities. According to the “silence is violence” mentality, if you remain silent, you have chosen the side of the oppressor.

Unfortunately for those of us who have remained silent out of fears of appropriating a movement for our own selfish motivations or turning sincere activism into a display of performative wokeness, the more widespread these movements become among our white peers, the more hollow and performative they seem. When everyone on Instagram is posting a black square, it’s easy to roll your eyes and dismiss others’ attempts at activism as a silly social media trend.

It’s not entirely our fault that we fear trends. In a society that prides itself on promoting a culture (or at least an illusion) of individualism, we’re taught to fear and resist the forces of groupthink and mob mentality. A certain analogy involving a cliff, or sometimes a bridge, teaches us that if all of our friends are doing something, it must be a bad idea. The worst thing you can be, according to the great American tradition of Emersonian self-reliance, is a follower.

I think it’s okay to be afraid of these things. Feeling bad things right now is kind of the point. As Mireille Cassandra Harper wrote in her eloquent guide to non-optical allyship (which, for anyone currently grappling with these fears, should be required reading), “Coming to terms with your own privilege will not be a pretty or fun experience. It is necessary to feel feelings of guilt, shame and anger throughout this process.”

I don’t know if your activism, or even my own, is for the right reasons. Maybe you are just donating to assuage your guilt or to get the social media shamers off your back. Maybe your own secret, selfish motivations always will undermine your attempted good deeds. That doesn’t mean you shouldn’t do them anyway. Doing something for the wrong reasons is still better than doing nothing. If all you can muster right now is a guilt donation, so be it. Make it anyway.

This is not to say that there’s no such thing as performative activism or that any small gesture of goodwill is an automatic get-out-of-white-guilt-jail-free card. There are definitely people out there who are doing it wrong. (See: influencers staging photo shoots at protests or in front of damaged property.) But here’s the thing: Your activism is only hollow and performative if it actually is hollow and performative. Breaking your silence is about more than speaking up. It’s about taking action, whether that’s protesting, donating, signing petitions, helping to clean and repair damaged neighborhoods, or otherwise doing the work to figure out how you can best be of service.

I have the exact same fears about writing this that I did about engaging with activism in the first place. I’m scared that I’m taking up space that could be better filled by voices of color. I’m scared I’m appropriating someone else’s struggle and re-centering the narrative on my own sob story about how hard it is to be a white person of privilege when, god forbid, circumstances force me to look that privilege in the face. But I’ve written it anyway in the hope that encouraging other people to get over those fears by sharing my own is more valuable than staying scared and silent. People of color have to live in real fear of the often violent consequences of systemic racism every day. The rest of us can deal with being afraid of getting called out for being problematic on social media.