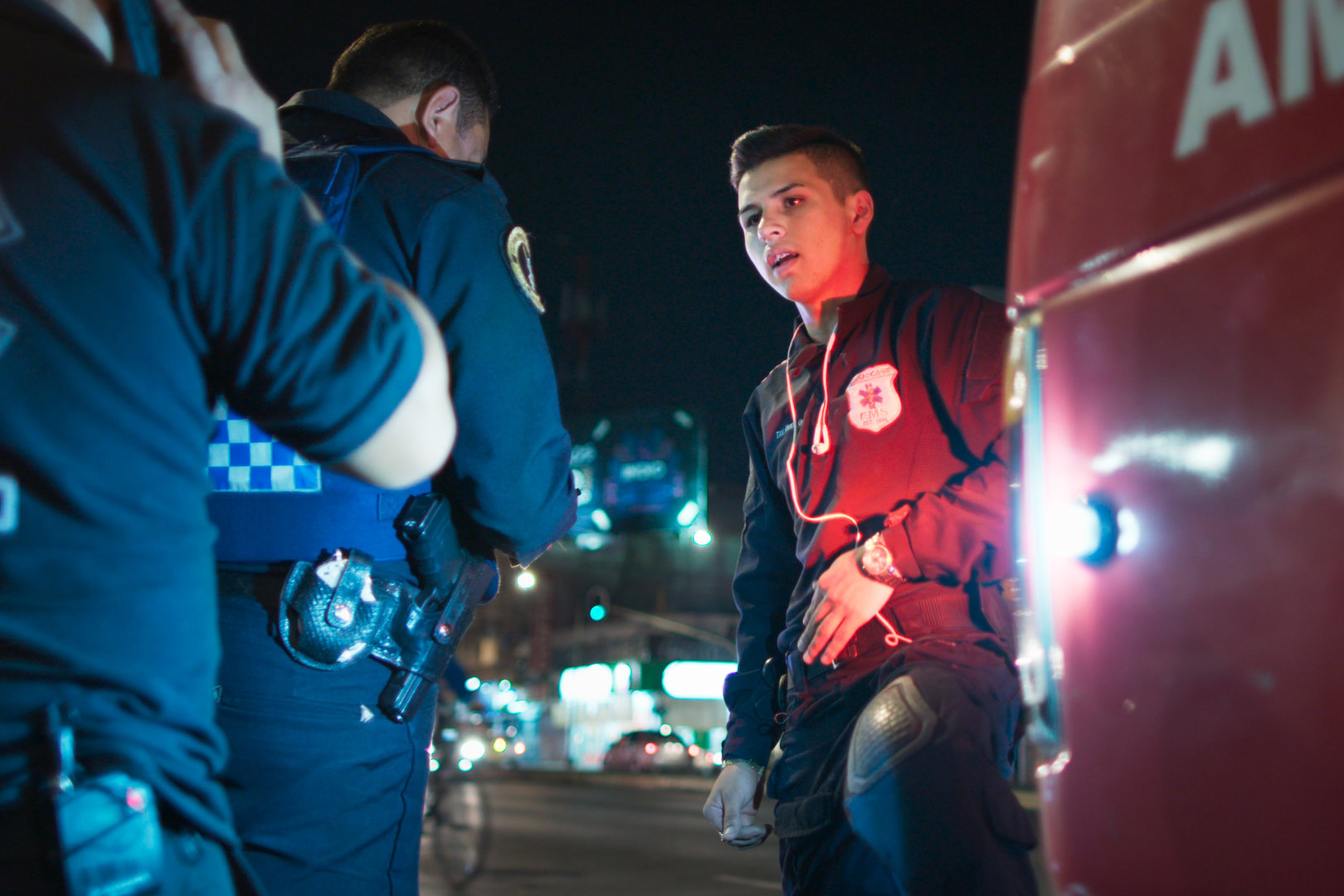 Luke Lorentzen embedded himself with the Ochoa family for nearly three years to capture the footage in "Midnight Family"
1091 Media
By Daniel Eagan / February 17, 2020 9:46 am

Mexico City depends on a fleet of 45 official, publicly funded ambulances to cover its 9 million residents. All of the others are private, the equivalent of mom-and-pop businesses. And they might be experts or entirely incompetent, depending on your luck.

The Ochoas — Juan, his father Fer, younger brother Josué, and relative Manuel Hernández — have been driving their ambulance for more than a decade. Night after night they confront horrifying accidents, cops on the take and rival ambulance corps. And for almost three years, filmmaker Luke Lorentzen tagged along.

Lorentzen was there as the Ochoas responded to crashes, fires, fights, overdoses — every disaster and tragedy one could imagine. And in his documentary Midnight Family, he shows what it’s like to live through endless crises.

“We would show up to an accident that would really push the limit of what I felt I could handle,” Lorentzen tells InsideHook. “I remember crossing my fingers so tightly that we wouldn’t get hit that night with another one as intense.”

Lorentzen spaced out his time with the Ochoas, and developed coping techniques to help deal with what he was seeing. But as he pointed out, the Ochoas are trapped in that world 24-7, year after year. However desensitized they’ve become to their work, Lorentzen feels it must affect them on a deeper basis, buried somewhere in their psyches.

“There are different types of burn-out,” Lorentzen said. “The work, the hours, the exhaustion — I’ve never worked harder in my life, and I think I’m just now recovering. There’s also the emotional impact of being exposed to all those traumatic events. In the end, I don’t know if I protected myself enough.”

The director’s first method of coping was to avoid the accident victims entirely. In fact, his initial plan was to limit all the shots in the film to those taken by a camera mounted on the ambulance dashboard. Unhappy with the results, he tried shooting from the back of the ambulance, the camera locked down on a tripod. But that wasn’t enough either. He realized that he needed to participate in what was happening.

“The next step was, ‘Okay, I’m going to try shooting a little handheld here and there,’” Lorentzen explained. “Then I would actually leave the ambulance when we got to an accident, take some wide shots. Okay, then get closer to the accident. It was like building up this muscle, figuring out how do I exist in this space, and do it in a way that is right for the Ochoas, right for the film, right for the patients.”

Sometimes that meant looking away.

“Don’t look patients in the eye, don’t let yourself engage with them,” he said. “That sounds cold, but it was something I needed to do to get through each night. Try to focus on camerawork, on what shots I needed, instead of letting myself fall off an emotional cliff.”

Lorentzen often found himself in dicey neighborhoods, trusting the Ochoas for protection, their reputation serving as a kind of de facto security blanket. But when the Ochoas raced other ambulances through heavy traffic, Lorentzen couldn’t do much more than hold on.

“Those driving scenes were probably when I was most at risk,” he said. “I don’t want to come across as the sort of person who doesn’t care about safety. I put a lot of thought into what I was comfortable with, and I made a decision early on that those chase scenes were a risk worth taking.”

Risk of a different kind came in Lorentzen’s encounters with policemen. After they “emptied my wallet” a few times, he learned to carry only enough cash to get through the night. Arriving at an accident, even the Ochoas wouldn’t know if the police on the scene were honest or corrupt. At one point in Midnight Family, cops handcuffed Juan Ochoa and pushed him into the back of a patrol car. Then they demanded the memory chip from Lorentzen’s camera.

“Juan still had his mike on, and I could hear him yelling in my headphones, ‘Whatever you do, don’t delete the footage, it’s the only thing we have,’” Lorentzen remembered. “I had two cards in the camera, and I popped out one that was blank and gave that to them.”

The director describes dealing with police as “chaos, one of the most unpredictable, frustrating things I’ve been through. Once I was pulled over and my wallet was emptied, they tried to take my iPhone, and those were just traffic cops.”

Lorentzen admitted that he knew next to nothing about healthcare in Mexico City when he moved there after film school. In his thesis film, New York Cuts, he shot in six different hair salons in New York City, from Manhattan to Brighton Beach. He initially thought of trying a similar strategy of compare and contrast in Mexico City traffic. Cut from two guys in a cement truck to first graders in a school bus.

“I lived about two blocks from Mexico City’s general hospital, the largest one in the city,” Lorentzen recalled. “I would walk by hundreds and hundreds of people outside the emergency room waiting for care. An ambulance was going to be a vignette in my original idea about transportation, so I was already looking for one. But the moment I met the Ochoas, it was clear that they needed to have their own film.”

Lorentzen gained the Ochoas’ trust by working as hard as they did. A typical day began in the early afternoon, then might continue on until eight the next morning. The director grew close to Juan and the others during down time, waiting on sidewalks in the middle of the night, listening to police calls on the radio.

“When people think about filmmaking, it’s things like cinematography, editing, directing that come to mind,” Lorentzen said. “But with this film the task at hand was: Can I get this family to let me in? Can we build a relationship that’s intimate enough so the story gets told, warts and all?”

He had two great fears. One, cross an ethical boundary with viewers and lose their trust, making them feel like voyeurs. Two, show so much that viewers become desensitized to the accidents. He struggled over several different edits of the film, shaping 400 hours of material into a terse 81 minutes.

“I really needed to control the extent to which I burned people out,” he explained. “I wanted each accident in the film to be significantly more intense than the previous one. So the first one is enough to get you on the edge of your seat, but it’s not pedal to the metal. Then little by little I kind of heighten that.”

More than from the accidents themselves, Midnight Family gains its power through the moral and ethical issues Lorentzen raises. If there weren’t any accidents, the Ochoas didn’t make any money. And as the last accident in the documentary shows, their profit comes at the patient’s expense.

Lorentzen filmed that accident, the most important scene in the movie, early in the production. His challenge then was to find another 8 to 12 scenes to set up the ending. One crucial scene of Juan discussing hospitals with a patient he placed halfway through the documentary.

“If viewers are paying attention, they will understand that the Ochoas are getting kickbacks,” Lorentzen pointed out. “It’s important to show, but I didn’t want to throw the Ochoas under the bus. There were many different versions of the film where they’re either too heroic or too shady, depending on just a couple of shots here and there.”

Lorentzen began the project unsure of what it would actually be. And he confessed that a lot of the footage he shot “was me trying to learn how to make a movie.” When it came to editing, Lorentzen tried to cut the material himself, only to find out that he needed to return to Mexico for another shoot.

In 2017, Paloma López Carrillo, a Mexican editor, came onto the project. Lorentzen submitted their cut to Sundance, but it was rejected.

“We had this crucial moment where we needed to either call it quits, submit that cut to other festivals, or pull the film and give it more time,” Lorentzen explained. “I decided to give it another year. I went back for one last shoot, where about 75% of the film came in a three-week period. I took over the edit, cut for another five or six months, and that finished out the film.”

Since then the film has won awards for directing, cinematography, and editing at festivals around the world, from Sundance to the prestigious EnergaCAMERIMAGE in Poland. Lorentzen has brought the Ochoas to screenings, and said they love to sit front row, center.