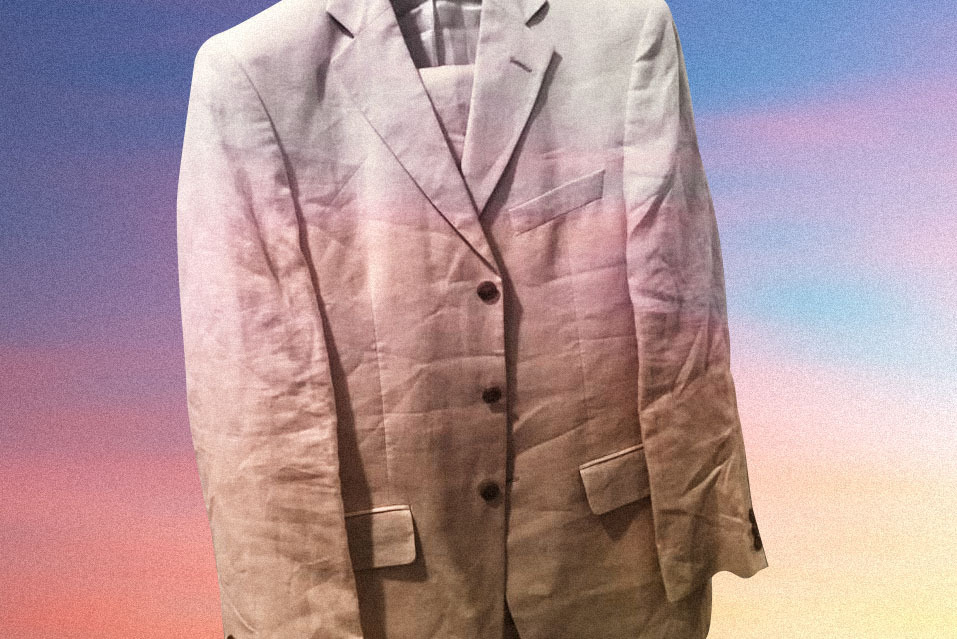 Just because we had to cancel everything this summer doesn’t mean people won’t still have weddings. Whether it’s on Zoom or socially distanced in a backyard, it’s hot out and people are going to get married, and you will probably have to put on a suit for it. And since it might be your only time doing that before the leaves start to turn, we’re here to convince you to not drape yourself in linen with your one opportunity.

I get the draw of linen: it’s lightweight and it looks summer-y — the stuff of those breezy magazine spreads of impeccably dressed people on beaches or sun-dappled farms in the country. You picture characters from some William Faulkner novel sitting around sipping gin and tonics in the sun wearing linen. It even sounds comfortable: linen.

But here’s the thing about the fabric: unless you are literally putting it on moments before taking pictures — or you’re literally never sitting down or moving, really — it is going to wrinkle. It is going to look messy and awry in a matter of minutes, and while this may not be the worst thing in the world, it also might not be what you’ve envisioned. So, what are your options?

InsideHook talked to New York-based tailor and founder of Kamsten Kamau Hosten, who walked us through the dos and don’ts of linen, its alternatives and why there needs to be a re-education on what constitutes appropriate wedding dress.

Get the Linen Look Without the Wrinkles

If you’re a stickler for perfection (as, in my experience, many people planning a wedding are), linen might just not be for you. I saw it all the time when I worked helping men pick out suits for their big day — excited couples darting straight to the light grey linen suits to pair with lavender ties and gingham pocket squares. Their faces always dropped when we told them, You know, in a matter of minutes this suit is going to look like someone had it balled up in the bottom of their closet.

But don’t fret: linen is far from the only option to achieve that laid-back summer look. There are plenty of other fabrics that offer the effortless aesthetic of a linen suit without the shapeshifting. Hosten recommends Solaro, a herringbone with a sort of iridescent tint to it. He also recommends looking into bamboo, which is breathable and lightweight, as well as Fresco, a high twist wool with a simple weave but some textural appeal. Even a lightweight sharkskin or linen-and-wool blend would suit, he says. Then there’s seersucker: to diverge from the stereotypically gauche image of the fabric, Hosten recommends opting for a more reserved color like navy, black or grey.

He also suggests some seasonal flourishes that will keep your wedding party looking weather-appropriate. The construction of the jacket matters too. “I think you might do a softer shoulder, you might do half canvas or you might do no canvasing in the chest, anything that lightens up the actual jacket itself so it doesn’t feel as restrictive. It doesn’t feel as heavy,” he says. Hosten recommends tie shoes for loafers, even foregoing a tie, or opting for a linen shirt — on which wear will be less visible — if you really want that linen vibe.

“Everything should feel a little softer, a little less stuffy.”

And If Your Heart Is Set on Linen …

But it’s not necessarily linen that’s the problem; it’s our expectations of it. Hosten says there needs to a “re-education on what looks good.” He says he would urge people to embrace the ease of linen. “[I’d say,] ‘Listen, this is a different kind of looking good. Clothing should look like you’ve worn it, like you’ve owned it, like it’s part of you. And linen is part of you, and linen obviously does do that.’”

For anyone married to the idea of linen specifically, but unwilling to give up the pristine look that is basically antithetical to its function, Hosten also has some tips, like taking pictures as early in the day, just after everyone gets dressed, to avoid any undue wrinkling. You should also cut the suit with a more classic fit so it will be less inclined to bunch or pull. And opt for a darker color, which will be more forgiving than a light one when it comes to showing wrinkles.

And if that isn’t enough, he jokes that you might need a portable steamer in tow. “Then you realize, ‘Oh, you know what? I’m being insufferable. I’m sorry, everyone. You just wear your clothing and be comfortable.’”