We can all use a hand-forged replica of an 11th century Danish broad axe.
Wes Robinson for InsideHook
By Jonny Diamond

Welcome to another installment of That’s the Dream, InsideHook’s new series exploring the things we want but will probably never own, for whatever reason. For this installment, writer Jonny Diamond rhapsodizes about the $600 replica of a Danish broad axe he’d need to join a Renaissance fair to justify owning.

What does any 21st-century man really need with a hand-forged replica of an 11th-century Danish broad axe? I am not in any rush to hand-hew shipbuilding timber from the tallest oak trees in the Silkeborg forest, nor am I particularly worried about Swedish reivers invading my village from the north.

Legendary Swedish axe-maker Gransfor Bruks has long had an “ancient axe” collection, which features such utterly inessential tools as the two-lugged beard axe, the French trade tomahawk, and the prize of the collection, a $700 Swedish battle axe based on a 10th-century weapon currently housed at the Jämtlands Läns Museum in Östersund, Sweden.

Not the most expensive axe in the collection, the 11th-century Danish broad axe — which is available only on special order — will set you back just under $600. This is a truly beautiful object.

The axe head looks like the skate blade of some rosy-cheeked giant right out of a Breugel painting; it is a glimmering sweep of hardened Swedish steel, a small silver river-wave arrested and honed and lovingly affixed to a hand-sanded length of linseed oil-soaked hickory. The smiths at Gransfors finish and polish by hand, so there’s no hint of the dull uniformity of a factory-pressed and -polished axe head. Stare long enough into the burnished face of the 11th-century Danish broad axe and you can almost see the idyllic clearing in the beech forests of Central Jutland, hear the resonant rhythmic knock as a downed tree becomes a 16-foot centerbeam …

But look, $600 is an awful lot for an axe. The most expensive, widely available axe on the market is the hand-painted Best Made Co. American felling axe, which currently retails at $365 (compared to $280 for the unpainted version). I’ve written before about the lucrative fetishization of the American frontier — and axes in particular — but I’ll say it again here: charging an additional $80 to paint and varnish the handle of an axe (which makes it harder to grip, and thereby a less effective tool) is pretty good shorthand for the dysfunctions of life in late-capitalism.

Related: Why I Love but Will Never Own a Classic Saab 900

I probably have stronger feelings than most about the contemporary high-end axe market, and here’s why: about five years ago I misjudged the lean of the 60-foot Red Maple I was taking down for firewood and my chainsaw got badly pinched. Wedges wouldn’t work so I had to chop it out with my axe; the bar of the chainsaw was a little bent so the only way the tree was going to come down was the old fashioned way. Each satisfying thwack of the axe rose a semitone in pitch as the hinge holding the tree upright up grew narrower and narrower. This is the ascending scale you miss when engulfed in the engine-room roar of a chainsaw, a tunnel of noise that makes the forest into a very small place — just you and the tree that may or may not kill you.

As I finished the cut the maple gave a great, loud, moaning creak and crashed to the forest floor. It was heavy work, but I immediately understood it to be a deeply satisfying experience: sure, my arms and shoulders were spent, but not much more so than from a day absorbing the vibrations of a chainsaw. Sitting there in the late February thaw (on the newly downed maple!) I decided to fell the next tree entirely by hand, without the aid of a chainsaw* and the heavily refined petroleum required to power it.

The tool I used that day had been a gift, a full-sized Gransfors Bruk all-purpose splitting axe, which always seemed to hold its edge twice as long as other axes, with half the sharpening. Committed, now, to felling the old-fashioned way, I bought a proper American felling axe. It was a classic 19th-century Dayton railsplitter, modeled on a popular axe-head pattern from the golden age of American logging. It looked cool and worked fine, but no blade measured up to the Gransfors Bruk. In fact, none of the tools I was using at the time worked half as well, or felt quite so good in the hands.

Curious about who was making such wonderful axes, I fell into a Gransfors Bruk rabbit hole.

The company has been around in one guise or another since 1868, but owes its current preeminence among axe manufacturers to a very deliberate decision in 1989 to return to small-scale, individual craftsmanship, moving away from the mass-production of the 1970s and ’80s. Not only did this “so old it’s new” approach yield better axes, it dramatically reduced the need for resource-heavy, pollutant-laden processes normally associated with scaled-up fabrication. The next decade saw Gransfors Bruk mining traditional Swedish woodcraft for axe patterns and expertise, developing a series of axes based on the earliest northern European designs, aka “The Ancient Axe Collection.”

Not only was this approach good for the axes and good for the environment, it also turned out to be great marketing. To that end each Gransfors Bruk axe comes with the initials of its blacksmith stamped on the poll of the axe, in a nod to individual artisanship. There’s also an accompanying “axe book” (more of a pamphlet, really) that rhapsodizes about pre-industrial craftsmanship and the natural beauty surrounding the forge in Gransfors. It can all seem a bit much for what is and always will be a lump of steel attached to a piece of wood — like an overwritten farm-to-table menu — but it’s certainly working: GB’s Scandinavian forest axe has been on back-order in the US for almost a year.

The arc of Gransfors’s millennial resurgence matches the broader yearning in affluent western society for pre-industrial simplicity and its affirming byproduct, ecological sustainability, the kind of principles we now see marketed in everything from microbrews to heirloom pickles to bespoke mattresses. Small-scale, personal, local, slow: 100 years ago these were the de facto virtues of rural working class existence. Now, they are virtues of privilege. But they are virtues nonetheless.

But back to the Danish broad axe. Though it looks like something Santa’s palace guard would carry, a broad axe is not a weapon: its long, straight edge is designed for hewing posts and beams and boards from giant northern trees. It is very hard work, turning a tree into timber by hand. I’ve done it with hemlock, using the 100-year-old American broad axe I bought from a very old man in the Catskills. And here’s the thing: though it’s a staggeringly beautiful piece of craftmanship, the actual design of an 11th-century Danish broad axe is bad for the job it’s built for. When it comes to axes, the newer American versions are much better than traditional European axes, which have remained largely unchanged for a thousand years.

It wasn’t until the decades of peak lumberjack — the middle of the 19th century — that old world axes underwent a radical transformation in the hands of American blacksmiths, as the endless new world forests filled with armies of axe-wielding loggers demanding better, more efficient tools. The big innovation? Shifting the weight of the axe head from the blade to the poll (the part where the handle goes), thereby giving the axe-wielder much more control of each swing; even if I were desperate to star in YouTube videos in which I hand-hew oak beams, I’d use an American broad axe.

So, until such time as I find myself conscripted to cosplay a Ren Faire woodsman, or inherit a castle with a walk-in fireplace, I’ll have to admire the 11th-century Danish broad axe from afar, a beautiful, useless, exquisitely crafted historical artifact.

*Listen, I’m neither eco-martyr nor luddite: if I had to clear 10 acres of hardwood forest, I would use a goddamn chainsaw. 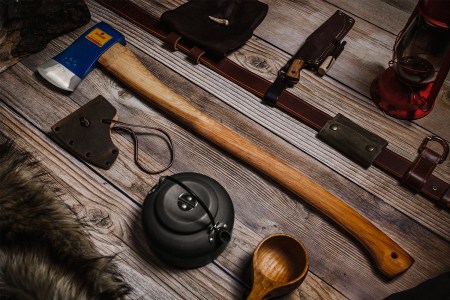 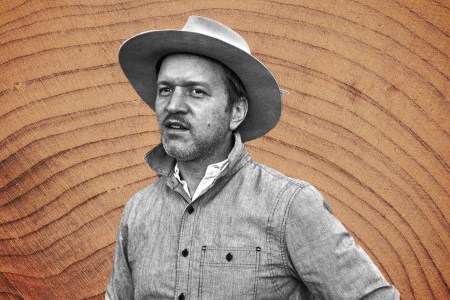 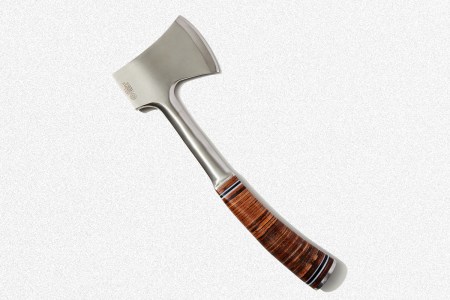 The Full Metal Jacket Axe Is a Stunner, Somehow 30% Off