The Most Expensive Drinks in the World, and Where to Buy Them

(Mandel Ngan/AFP/Getty Images)
By Will Levith 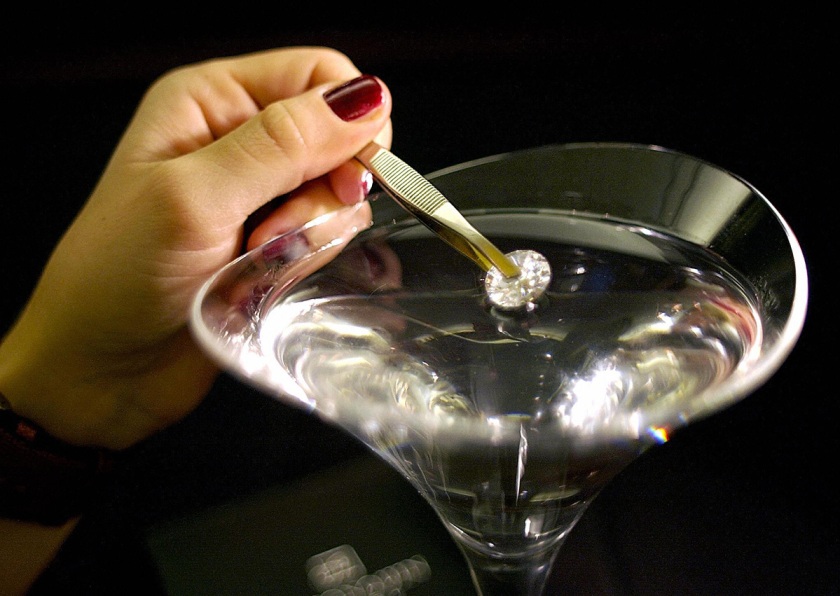 An employee at the Algonquin Hotel demonstrates how a ‘Martini on the Rock’ will be made. The Algonquin, once the haunt of 1920s authors and poets like Dorothy Parker, is making a fresh bid for notoriety by offering a $10,000 martini cocktail made with a real diamond (Mandel Ngan/AFP/Getty Images)

It’s high time the high-rollers of the world had a chance to branch out from bottle service. RealClearLife has put together a list of some of the priciest pours, cocktails, beers, and other alcoholic beverages money can buy around the world.

Fine & Rare – New York City – Various Pours ($400-$1,000) – Let’s start reasonable and work our way upward, shall we? This recently opened spot from the folks behind the Flatiron Room have a veritable treasure chest behind their bar. For whiskey lovers, this could mean a Glenmorangie 35-year Pride 1978 ($481/dram). But for those interested in actual “pride,” the restaurant serves up a 10-year Pappy Van Winkle Old Rip for $1,000/dram. For more info, click here.

The London Bar – New York City – Billionaire’s Margarita ($1,200) – This is definitely off-menu territory. According to Travel + Leisure, the drink consists of limited edition Patrón en Lalique Serie 1 and Rémy Martin Louis XIII. You could probably finance a trip south of the border with this bill alone. For more info, click here.

Ty Bar – New York City – Billionaire’s Row Cocktail ($1,210) – For those with corporate cards, a receipt for a round of these babies might be difficult to explain. The Four Seasons Midtown’s Ty Bar serves up this twist on the classic Old Fashioned with impossible-to-find Macallan M, Colorado clover honey, and orange bitters. Don Draper would be proud. For more on the Ty Bar, click here.

Savoy’s American Bar – London – Sazerac ($6,2000) – America has the London Bar in New York, while England has the American Bar in London. If you’re not completely confused at this point, the folks at The Savoy hotel are offering up a classic Sazerac—the unofficial tap water of New Orleans—in the priciest of manners. There’s includes 1858 Sazerac de Forage, Pernod absinthe, and 1900 Peychaud’s bitters—and we can only imagine that once lit afire, you’ll be able to see more than a few dollar signs in the flames themselves. Check out the full bar menu here.

Gigi’s Mayfair – London – The World’s Most Expensive Cocktail ($9,400) – The name of the drink is a misnomer; clearly, there are more expensive pours elsewhere in the world. But Gigi’s, a favorite of one-time Bond girl Grace Jones, created the mixture for her out of 1990 Cristal and 1888 Samalens Vieille Relique Vintage Bas Armagnac, finished with flecks of gold leaf. A view to a kill, indeed. For more on Gigi’s click here.

Algonquin Hotel’s Blue Bar – New York City – Martini on the Rock ($10,000; for one) – We couldn’t confirm whether this drink actually still existed or not. So we reached out to the bar itself. Indeed it does. The bartender needs at least 72 hours notice to pull it off, but not for obvious reasons. The martini-making part is simple. The actual diamond glistening in the bottom of the glass? Not so much. (The gemstone is pre-selected by the hotel’s in-house jeweler, Bader & Garrin.) For more on the Blue Bar, click here.

The Wynn’s XS Nightclub – Las Vegas – The Ono ($10,000; for two) – Everything that happens in Vegas stays in Vegas. Unless that drink you spent $10K on happens to worm its way into the water-cooler conversation at work on Monday. According to Eater, the Ono is comprised of Rémy Martin Louis XVIII Black Pearl cognac ($2,500/shot), Charles Heidsieck 1981 Champagne Charlie ($500/bottle), Bulgarian rose nectar (harvested only during a three-week period), fresh-squeezed OJ, and apricot purée. Its drinkers also get custom silver Mont Blanc cuff links and an 18-karat gold necklace studded with a black pearl and diamond. Bottle service? This drink spits on bottle service. For more on the club, click here.

The Bar at the Ritz Carlton, Tokyo – The ‘Diamond Is Forever’ Martini ($17,500) – If you’re a James Bond fan, this is the ultimate “shaken, not stirred” option. Located on the 45th floor of the highest building in Tokyo, the Ritz’s bar offers this extravagant sip to only its wealthiest customers. The drink’s components? Grey Goose vodka, lime juice, topped off with a one-carat diamond. The best part? Aside from being able to keep that gem, staffers play the Diamonds Are Forever theme while serving you, so that everybody knows who’s a badass and who isn’t. For the complete menu, click here.