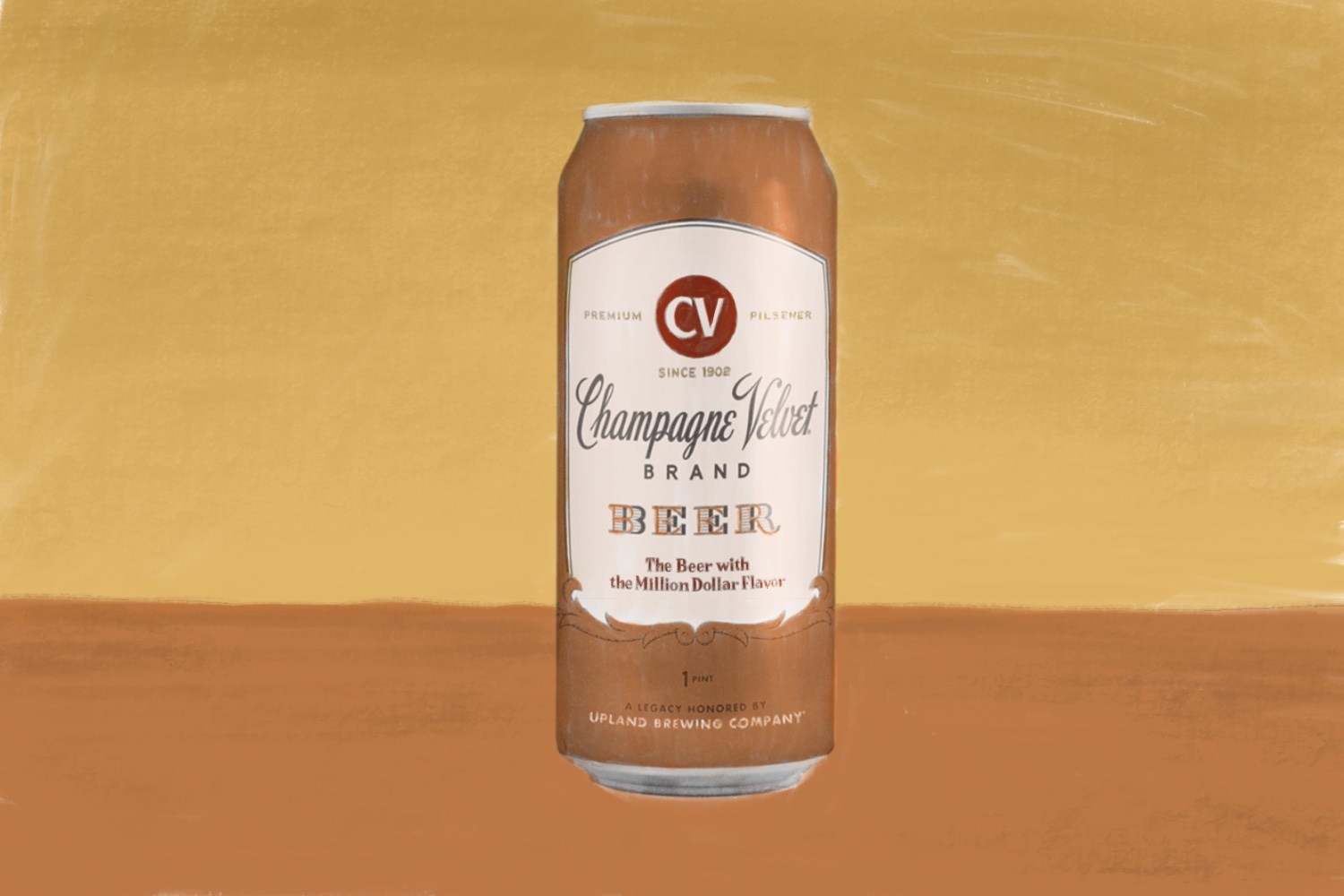 The pilsener touted as being “The Beer with the Million Dollar Flavor”
By Aaron Goldfarb / December 9, 2019 6:33 am

A few months back, after an all-day beer festival, a group of beer industry people spilled into Brooklyn’s Gold Star Beer Counter as the clock raced toward midnight. We’d spent the day drinking the de rigueur beer styles of this modern era: hazy IPAs, thick and juicy like pulpy OJ; sour beers so tart they could make your cheeks cave in on each other; pastry stouts more dessert-packed than a sundae bar. This is craft beer in 2019. So I was surprised when a friend handed me a pint can that looked like it held some swill from the 1950s: a pilsner touted as being “The Beer with the Million Dollar Flavor” in an old-timey font. This was my first introduction to Champagne Velvet.

“The design definitely plays a big part for me,” explains John Paradiso, a writer for beer site Hop Culture, and a fan. “It wouldn’t look out of place next to a Coors or Miller Lite, but it does have a little something special to signal it might be a step up from those beers.”

Champagne Velvet’s redemption story starts in 2013, when Upland Brewing was preparing to celebrate its 15th anniversary and needed a beer idea. No. That’s not right. Let’s start its story back in 2000, when something called Terre Haute Brewing Company opened and began brewing this beer that they found mild success with it, before the brewery was shuttered in 2008.

Or maybe we should start the story in the 1970s at “not its proudest moment,” according to Patrick Lynch, Upland’s Lead Brewer, when it was a horrendously gross malt liquor available in such flavors as grape and berry, the latter tasting like “Colt 45 mixed with cotton candy.”

But the story really, truly to start in 1902, when the Indiana-raised son of German immigrants created this beer that would make his parents proud. It would fall off the market when the original Terre Haute Brewing Company (THBC) got stalled by prohibition in 1918, then get revived again post-prohibition in 1934, where it eventually grew to be one of the best-selling beers in America by the mid-century, before corporation consolidation forced THBC to shutter in 1958.

That was Champagne Velvet.

“Instead of brewing a typical ‘Upland’ beer like some special sour, the idea was to pay homage to Indiana’s brewing heritage,” explains Lynch. We’re back in 2013, when Indiana’s arguable best brewery was looking to create a beer to celebrate their upcoming anniversary. “We’ve been brewing beer for 15 years but a lot have been brewing it for much longer.”

Then-president Doug Dayhoff knew a Terre Haute man, Mike Rowe (“No, not the Dirty Jobs guy,” mentions Lynch), a historian and collector of breweriana, who possessed something that might fit the bill for this anniversary beer. Rowe had acquired the rights to a brand called Champagne Velvet when its trademark had lapsed. After buying the 1902 recipe for just $20, he even began brewing it again in 2000. Rowe may have not succeeded in his quest to revive “CV” to its former glory, but he wanted the next owner to give it an earnest shot — and the Upland crew fit the bill.

Besides just the brand name, logo and imagery, Lynch was tickled to see Rowe’s package included a textbook penned by the 1902 brewer Walter Bruhn, along with that original Champagne Velvet recipe handwritten on a slip of paper folded-up inside.

“It wasn’t quite a recipe you could just plug in,” explains Lynch. The recipe, which had once been reportedly insured for $1 million (hence the motto on the can), listed the beer’s grain bill (corn and six-row barley), its starting gravity (the potential alcohol content) and when to add water. But Lynch would have to guess as to what hops would have been used at the time — he presumed Cluster, a varietal most prominent in America back then and still grown today. “What we had was the foundation of a nice pre-prohibition pilsner.”

But would people in Indiana give a shit about a pre-prohibition pilsner? Would any one outside of Terre Haute even care about the name, Champagne Velvet, “your grandpa’s favorite beer,” Lynch calls it, and a brand that had been mostly forgotten by any one younger than 50?

The answer would prove to be a resounding “yes.”

It was an immediate hit in Indiana — people were obsessed with the imagery — and then, when Upland decided to brew it regularly, it started migrating to neighboring states. The recipe and packaging would slowly improve over the years, too. When a local malt house called Sugar Creek Malt Co. opened in 2015 in nearby Boone County, Upland began to source a six-row barley malt similar to what would have been used back in 1902, which added a much richer flavor. They’re confident that the beer now tastes like the original Champagne Velvet, perhaps for the first time since 1918. Putting it into cans in 2016 really catapulted the beer to cult status — grabbing a Champagne Velvet now feels like an act of whimsical nostalgia.

“It has the unfussy allure and coolness of Miller High Life,” claims Paradiso. “The reason it works so well is that it’s not even poking fun at macro lagers. I don’t think it’s a big ‘fuck you’ to the big guys; it’s simply a great beer made by the slightly smaller guys.”

In 2017, when Upland began distributing their pricey and highly-coveted wild ales to national markets, they were surprised how many top beer bars began asking if they could get Champagne Velvet as well. It had never been the intention to let that beer leave Indiana. But it eventually found its way to hip spots in places like California, Texas, Washington DC, Boston and, of course, New York, where I first had it at Gold Star.

“It has really resonated outside of the Midwest,” Lynch claims. It’s something unexpected for Upland, who are mostly known for barrel-aged beers and sours, and had only ever brewed one other draft-only pilsner before attempting Champagne Velvet. It’s quickly become a sensation amongst beer-industry folks, who enjoy drinking it late at night after a day of enjoying more flavorful beers.

“It’s a craft alternative to a ‘nothing’ sorta beer,” says Gage Siegel of BeerMenus.com. He particularly likes Champagne Velvet’s corn character, something you’ll also find in Miller High Life and Yuengling. “It’s an easy one to bring to a party,” adds Paradiso, who loves how “smooth, clean and tasty” it is. He even included it as one his top beers of this past summer.

It doesn’t hurt that its price — less than $3 a can — is closer to the price of High Life than a similar craft lager in major coastal markets. It thus enables beer geeks to guiltlessly and without any irony drink what is essentially a light-bodied “macro” beer without buying from a corporate behemoth. It’s no wonder it has become Upland’s second best-selling beer overall. Before we know it, it could once again become one of the best-selling beers in the entire country.

“I would hope when people tell the story of Champagne Velvet 100 years from now, Upland is a huge part of it,” says Lynch. “There’s just such a long legacy from with this beer — a whole lot of highs, some lows when it was a malt beverage. But I think we’ve reclaimed its original legacy.”