The National Comedy Center is opening to the public next month. 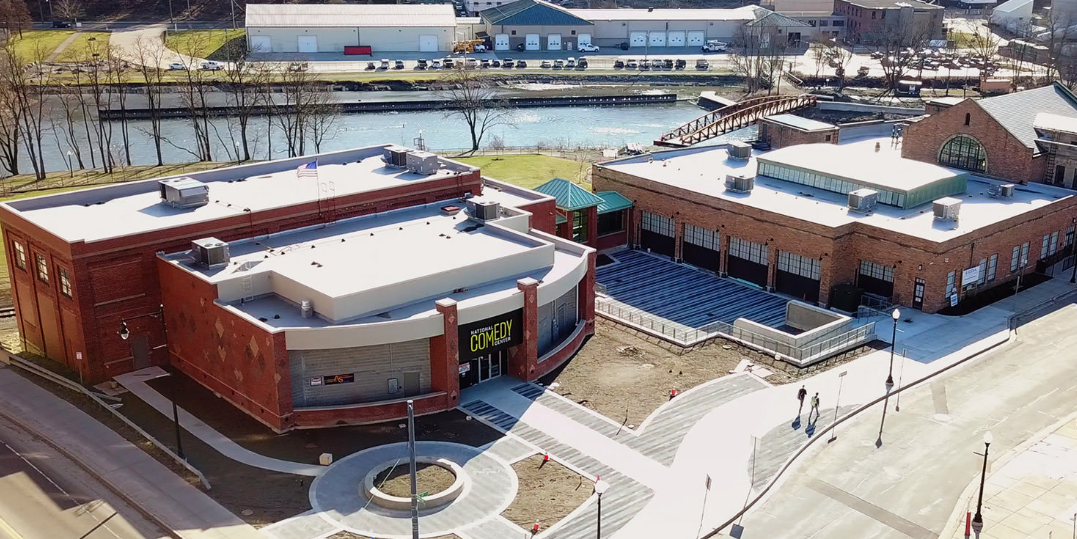 If you build it, they will laugh.

Inspired by the legacy of Lucille Ball instead of the legend of Shoeless Joe Jackson, the National Comedy Center is set to open on August 1 in the birthplace of America’s queen of comedy, Jamestown, New York.

Built on the site of an old railroad station and trolley garage, the 37,000 square-feet facility fulfills Ball’s wish for her hometown to be a destination for the celebration of the art and history of comedy.

The first and only cultural institution in the U.S. dedicated to preserving, protecting, and showcasing the comedic arts and their cultural impact, the NCC showcases the story of comedy from its origins through the present. The exterior of the National Comedy Center in Jamestown. (Via Facebook, @nationalcomedycenter)

To do that, the facility has more than 50 interactive exhibits which guests can visit or skip based on their taste in humor. To make sure each guest experience is as positive as possible, visitors complete a sense-of-humor profile at the start of their visit that is then embedded onto a smart wristband. As visitors wander through the museum, the wristband interacts with the exhibits based on its wearer’s individual comedic sensibilities.

The goal is for each’s guests experience to be shaped for their specific sense of humor. But, if a guest comes back a second time and completes the sense-of-humor profile differently, they’ll have a different experience.

Designed to be as immersive as possible, the exhibits focus on everything from slapstick and satire to stand-up and bawdy “blue” comedy. To further round the experience, the NCC has dedicated to comedy legends such as the Marx Brothers, Charlie Chaplin, Jerry Lewis, Joan Rivers, and George Carlin.

Here’s Lewis Black explaining a little bit about the NCC and the guest experience it will offer … and kind of failing miserably.

George Carlin’s daughter Kelly described the NCC as a “multimedia smorgasbord of comedy” that will require multiple trips to fully take in. Carlin had a major role in setting up the museum archive dedicated to her father — it’s filled with memorabilia, handwritten notes of ideas, setlists, and more.

“This is a place that will make you feel good,” Carlin told RealClearLife. “You’ll laugh for a few hours, see how your sense of humor is connected to those you come with and complete strangers. And every time you come, it’ll be different because you are. And the NCC will grow each year too.”

And, while the idea of a comedy museum may seem a little, well, funny, Carlin believes it fills a void that should have already been taken care of.

“Comedy is always important because it can speak truth to power,” she said. “It can remind us we’re all the same, it can distract us from the suffering, and it can take us out of ourselves to laugh and be free. We are surrounded by it and seek it out. It is ancient, it keeps us sane, helps us question the status quo and brings us together like few other things do.”

The interior of the National Comedy Center in Jamestown. (Via Facebook, @nationalcomedycenter)

Laraine Newman, an original Saturday Night Live cast member, also stressed the significance of a place like the NCC finally opening its doors.

“Comedy has always been important because it reflects ourselves and our environment in ways that present the truth but make you laugh at the recognition of it,” she told RCL.

Also, thanks to the way the museum is set up, people can see the fruits of each comedian’s labor as well as gain an appreciation for the hard work that goes into the process of crafting comedy.

“I think there are some that believe it’s easy,” Newman continued, “That the kind of thought and effort going into it isn’t meticulous and methodical and doesn’t involve years of development.  Hollywood director George Seaton was said to have visited the actor Edmund Gwenn on his deathbed saying ‘This must be very difficult for you Teddy’ to which Gwenn replied, ‘Dying is easy. Comedy is difficult.’”