It starts with the "Four Pillars of Mental Toughness" 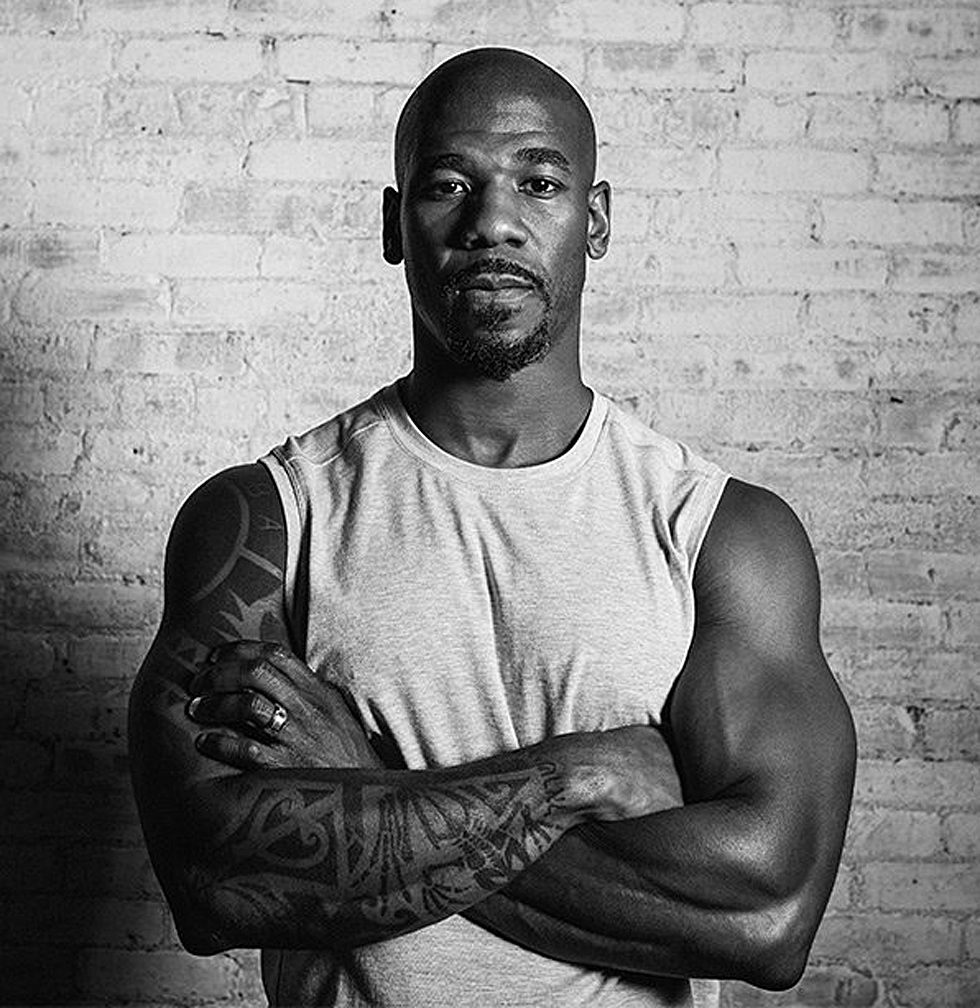 A while back, your correspondent had the pleasure of interviewing a gent by the name of Remi Adeleke. Guy has a helluva story: went from a life of privilege in Nigeria to one of poverty in the Bronx, ultimately saved from a series of disastrous life choices by becoming a Navy SEAL.

In a nutshell, this guy has faced tremendous obstacles and overcome them to succeed. He is, for lack of a more nuanced description, one resilient SOB.

To celebrate said book launch (you can order a copy here and we highly recommend it), we sat down with Remi once again to discuss the concept of resilience and what we regular fellas can learn from his experiences.

InsideHook: How much of resilience do you think is innate vs. learnable?

And I say that because my dad, he was a very resilient person. The Nigerian government stripped my father of millions of dollars in assets in the ‘70s, and for 10 years he fought them. Tooth and nail. He wouldn’t quit. He just kept on pushing and pushing and pushing. Finally in the early ‘80s, the Nigerian government broke and they said, “Hey, we won’t give you this land that you paid for, but we’ll give you your money back.” We’re talking about 10 years of fighting and not giving up. So I think it was innate for me, because that’s the way my dad was. It’s just in my DNA.

But I also say 30% learned, because I learned resilience from my mom. When my dad died and the Nigerian government stripped us of everything, my mom went from rich to poor. There were times when my mom didn’t have enough food to feed herself. She had just enough to feed my brother and I, and she would make it happen. And as a young kid, I was able to witness this and I was able to learn. You don’t quit.

What was the most helpful piece of advice you got during SEAL training?

Any specific techniques you’re at liberty to discuss?

One of the classes that we had was called “The Four Pillars of Mental Toughness.” And those four pillars are goal setting, visualization, positive self talk and arousal control. To this day I still use the four pillars of mental toughness for the work that I do — whether it’s writing or speaking or acting or whatever else.

Goal setting, I touched on that — eat the elephant one bite at a time.

Third pillar, positive self talk. Because we all have self talk, but sometimes our self talk is negative. “Oh I’m not gonna make it,” or “Oh this day is gonna suck.” That was one thing I learned in SEAL training, seeing guys who, as soon as that thought crept into their mind, three minutes later all you heard was “ding ding ding.” (Ed. note: this refers to the “drop bell” that a SEAL trainee can ring at any time to quit the program.)

But they taught us, “Hey, I can do this and I’m not gonna quit.” Or “Yeah, today sucks but I’m gonna get to tomorrow.” It’s just that consistent positive self talk throughout the training day. That helps tremendously, and something they taught us to keep us from breaking.

There was one kid I knew and he had been to BUD/S (Ed. note: The SEAL Physical Screening Test) before, and had quit the first time. The next evolution was called the Seven Stages of Hell, which is this horrible run. And because he had been to BUD/S before and quit, he knew that was coming next. He came up to me and he had tears in his eyes and he was like, “I can’t do that run, man.” He kept going on and on and before I knew it, he was at the bell. Once [temptation] creeps in, chances are it ain’t creeping out and you’re going to ring that bell.

What’s a common piece of mental strength preparedness advice that you haven’t found to be all that effective?

So there were guys who, before they went to SEAL training, knew that they were going to have to lie in cold water. They knew they would have to run a ridiculous amount of miles. So what they did to prepare themselves was they took cold showers or they went to the beach and lay in the ocean.

I don’t see that as effective because it’s not really preparing you mentally. Because when you’ve had enough, you get up out of the water and walk into a hot shower. It’s all done under your direction. SEAL training, you don’t know how long they’re going to keep you in the water. You don’t know if it’s going to be one minute or 45 minutes.

Intentionally exposing yourself to hard things, that’s good to a certain extent physically, but as far as preparing you mentally, I don’t think it’s effective, because you get to hit the stop button whenever you want to, versus when somebody else is telling you what to do.

I had a deep emotional reason as to why I wanted to be a Navy SEAL, and that reason, for me, was I had nothing left.

Can you remember an instance where you overestimated your mental toughness and ended up failing?

I honestly can’t. There were times when I was prepared mentally, but I wasn’t prepared physically and failed. When I failed I went back, and I took the lesson.

I went through all of SEAL training twice, never quit. I was performance dropped the first time, halfway through, during dive phase. It was because physically, I couldn’t complete this evolution called “The Tread.” I had to tread water with dive tanks, and, you know, I wasn’t a strong swimmer. But the moment I was kicked out, I took that failure and I turned it into a lesson.

Essentially the lesson was, “Hey Remi, you need to get your legs stronger, you need to get stronger as a swimmer.” And the next day I was in the pool doing exercises to strengthen my hips, to strengthen my legs, my glutes — so that if I had the chance to go back to SEAL training, I would crush it. A year and a half later I was allowed to go back, and I was prepared. I made it through. I took that failure, turned it into a lesson, that lesson led to success.

Do you see a common denominator in people who ring the bell during SEAL training?

But when you go into SEAL training with a Plan B, when life gets hard and you’re sitting in that cold water, and your body is beaten and broken, you’re going to quickly think about that Plan B. And that’s what happens with a lot of guys.

The second common denominator that I find in guys who quit is that being a Navy SEAL was just a “good idea” to them. It was cool to be part of the greatest fighting force on the face of this planet. It was cool to have cool guns and travel the world and grow out your beard and grow out your hair and not have to follow Navy standards. It was cool to be recognized as the greatest warriors. But these people didn’t have a deep, emotionally rooted reason as to why they wanted to be a Navy SEAL. They had surface layer reasons. And again, when the pain sets in, when the water is cold, when it’s day two of Hell Week and you know you’ve got four days left, that “good idea” quickly turns into a “bad idea.”

For me, going through SEAL training, I had a deep emotional reason as to why I wanted to be a Navy SEAL, and that reason, for me, was I had nothing left. And also, there was no Plan B.

The moment I was kicked out, I took that failure and I turned it into a lesson.

You’ve faced down some pretty harrowing situations over the years both in and out of your military career. What are you afraid of, if anything?

I would say I have a fear of failing, specifically failing because I didn’t do what I was supposed to do, or I half-assed the job. I do fail, I do make mistakes, but I think the fear of failing drives me.

The second fear I have is failing and somebody harming my kids in any way. Every parent who has kids can relate — it doesn’t matter what your background is.

Any lessons from being a SEAL that you’re applying to fatherhood?

So many. One that comes to mind is that every great leader will never make you do something that they have not done or are not willing to do. What I mean by that is I can’t expect my kids to be respectful to their mom if I’m not being respectful to my wife, their mom. I have to lead by example so that when they’re being disrespectful to my wife, it’s not hypocrisy for me to say, “Hey, don’t talk to your mom like that,” or, “Don’t do that, listen to your mom.”

Another thing that I apply from being a Navy SEAL is there’s really no such thing as can’t. As my kids get older I’m going to tell them, “Hey dude, your dad came from nothing. Your dad couldn’t swim. He didn’t have the academic scores to be a SEAL. He was skinny. Your dad had two warrants out for his arrest when he was trying to join the military. But despite all of those things, he achieved success. So I don’t ever want to hear you say ‘I can’t,’ because you can. Anything is possible.”

All images via Remi Adeleke
Interview by Danny Agnew