The Padres Have a New Shortstop. What About Fernando Tatis?

Last we checked on the superstar, he was serving an 80-game PED ban

That man is too talented to give up on. Where will he play in San Diego?
Icon Sportswire via Getty
By Tanner Garrity @tannergarrity

Finally, someone is willing to take money from A.J. Preller.

The San Diego Padres’ aggressive general manager offered Trea Turner a sum of $342 million, then Aaron Judge an astonishing $400 million, but neither blinked. Turner is moving to Philadelphia and Judge is staying in New York. It took until late last night, after most of the baseball world had gone to bed, for the Padres to ink longtime Boston Red Sox shortstop Xander Bogaerts to a $280 million deal.

He’ll fit in nicely with the Fathers, as he would with just about any team: the 30-year-old is always a threat to bat .300, has fetched MVP votes five years in a row, is usually healthy enough to play around 150 games a year, and ranks in the top third of the league’s shortstops for advanced defensive metrics, ahead of stars like Corey Seager, Carlos Correa and the aforementioned Turner.

That said, where does this leave San Diego’s other multi-hundred-million-dollar shortstop, a much younger and arguably much more exciting player by the name of Fernando Tatis Jr.?

Last we checked on Tatis, he was serving an 80-game suspension after testing positive for Clostebol, a performance-enhancing drug that’s banned by MLB. Thanks to the Padres’ deep playoff run (they were dispatched by the Philadelphia Phillies in the NLCS), this suspension isn’t slated to extend too far into the 2023 season. Tatis could be back as early as April 20, which means he would only miss a couple weeks of games.

Padres management was justifiably furious after Tatis was caught, especially considering he was already on the injured list for crashing his motorcycle in the Dominican Republic the previous December. Just when the franchise thought they were getting their five-tool wunderkind back for the most important baseball of the year, his season was officially shut down.

Tatis has spent his abnormally long offseason humbled and hungry, though, according to reports, and even took the extra time to replace a screw in his wrist. He should be fully healthy once he’s allowed back on the field.

Aaron Judge Got His Contract. The Captaincy Comes Next.

The Yankees are prepared to make a historic announcement

Where on the field will that be, though? Believe it or not, San Diego actually now has three capable shortstops on its roster — Tatis, Bogaerts and Ha-Seong Kim, the latter of whom posted 4.9 WAR in Tatis’s absence this year, and was named a Gold Glove finalist at the position. (The Atlanta Braves’ dazzling Dansby Swanson ended up taking home the hardware.)

Well, you can expect the new shortstop to play shortstop. That’s Bogaerts’s post, and Kim will likely be flexed to second base…which could prove a trivial assignment for a man of his talents. Meanwhile, the versatile Jake Cronenworth can cover first base now that Eric Hosmer is no longer with the team.

It’s an absolute embarrassment of infield riches (remember, Manny Machado plays third base for this team!), which will almost certainly push Tatis to the outfield, where he does have some experience. He played 23 games out there in 2021 (most of them in center), and knows how to catch a fly ball. He’s lithe, quick, has great instincts and a cannon for an arm. He should excel.

In a bizarre way, Tatis’s suspension could actually help the Padres — and his career — in the long run. Remember all the crap Derek Jeter got from the Yale nerds towards the twilight of his career, on account of his poor metrics at shortstop? The Yankees’ top brass wanted him out in center field, figuring a move could maximize his defensive value (and the lineup’s output), but there was no shot he was going to shed a position so synonymous with his adult identity. And what leverage did they have, really? He was Jeter.

But Tatis is firmly in the doghouse. He has zero leverage right now. Wherever you land on the 23-year-old, he’s objectively lucky San Diego hasn’t chosen to dispute a cent of the 14-year, $340 million contract it awarded him before he missed an entire campaign for back-to-back boneheaded reasons. Instead, the Padres just seem determined to see him back on the field. Their recent comments have been supportive.

As for baseball fans not excited to see the Padres gobbling up another superstar — if your team plays in the NL West, fair enough, but otherwise…this is a good thing for the sport. A robust, competitive free agent market is one sign of a healthy league (when’s the last time over a billion dollars were committed before the Winter Meetings?), while Preller’s determination to make San Diego relevant is frankly inspiring.

While some “small market teams” (owned by billionaires, mind you) are feigning poverty and tanking on purpose, the Padres are doing everything in their power to keep pace with the Los Angeles Dodgers. The team two hours north has a much higher valuation, sure, but that hasn’t stopped Slam Diego from essentially manifesting themselves into a heavyweight. If you build it (buy good players), people will come, Ray (the Padres have leapt from 18th to fifth in attendance).

Take note, MLB owners. And congratulations, Padres fans. Your infield is so good it’s spilling into the outfield. 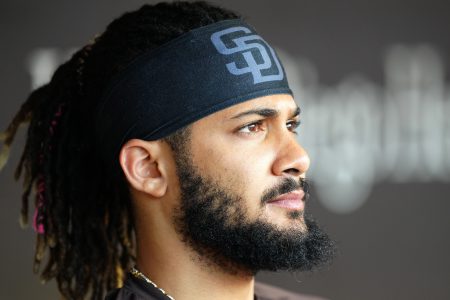