The remains had decayed beyond recognition.

Handout picture released by the Egyptian Ministry of Antiquities shows disintegrated mummies within the sarcophagus.
-
By Diana Crandall

The remains of three mummies in a pool of leaked sewage water have been discovered by Egyptian archaeologists at a construction site in Alexandria, CNN reports. The remains, which Egypt’s Ministry of Antiquities say likely belonged to military officers, were found in what CNN describes as a “previously unexcavated section of one of Alexandria’s largest ancient cemeteries.”

“One of the mummies had a trace of an arrow in the head,” ministry official Aiman Ashmawy Ali told CNN in a phone interview. ”It proves he died in a conflict. Maybe that explains three mummies in one big sarcophagus.”

Pictures from the dig show the experts descending into a 16-foot-deep pit. They reportedly wedged the large sarcophagus open with a wooden plank.

Take a look at some of the images below.

Photo released by the Egyptian Ministry of Antiquities shows archaeologists prying open the lid of the sarcophagus. 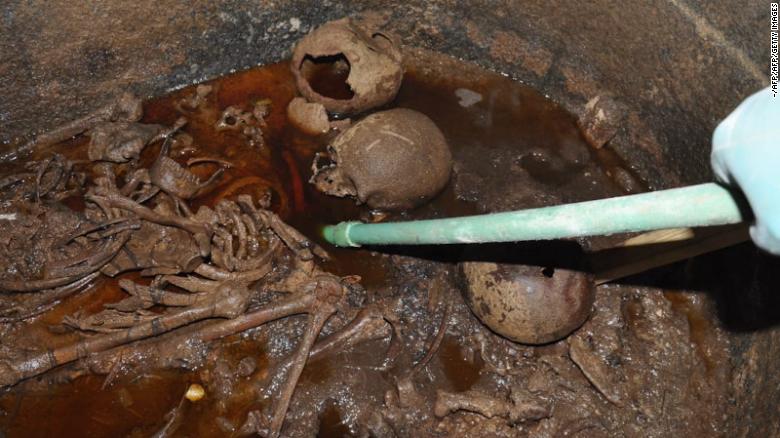