From ornate costumes to decadent ofrendas, the celebration is a testament to Mexico's vibrant and colorful culture 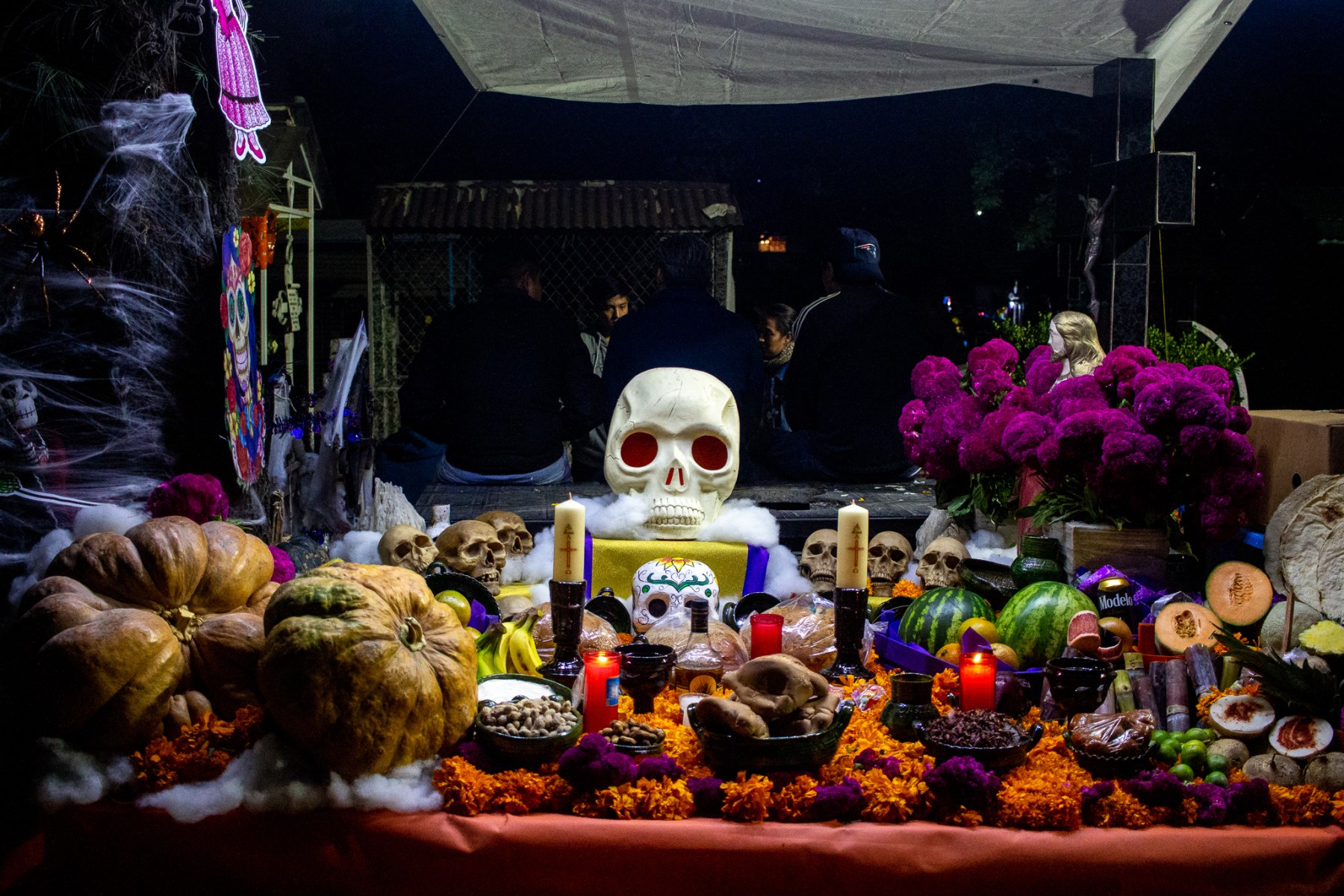 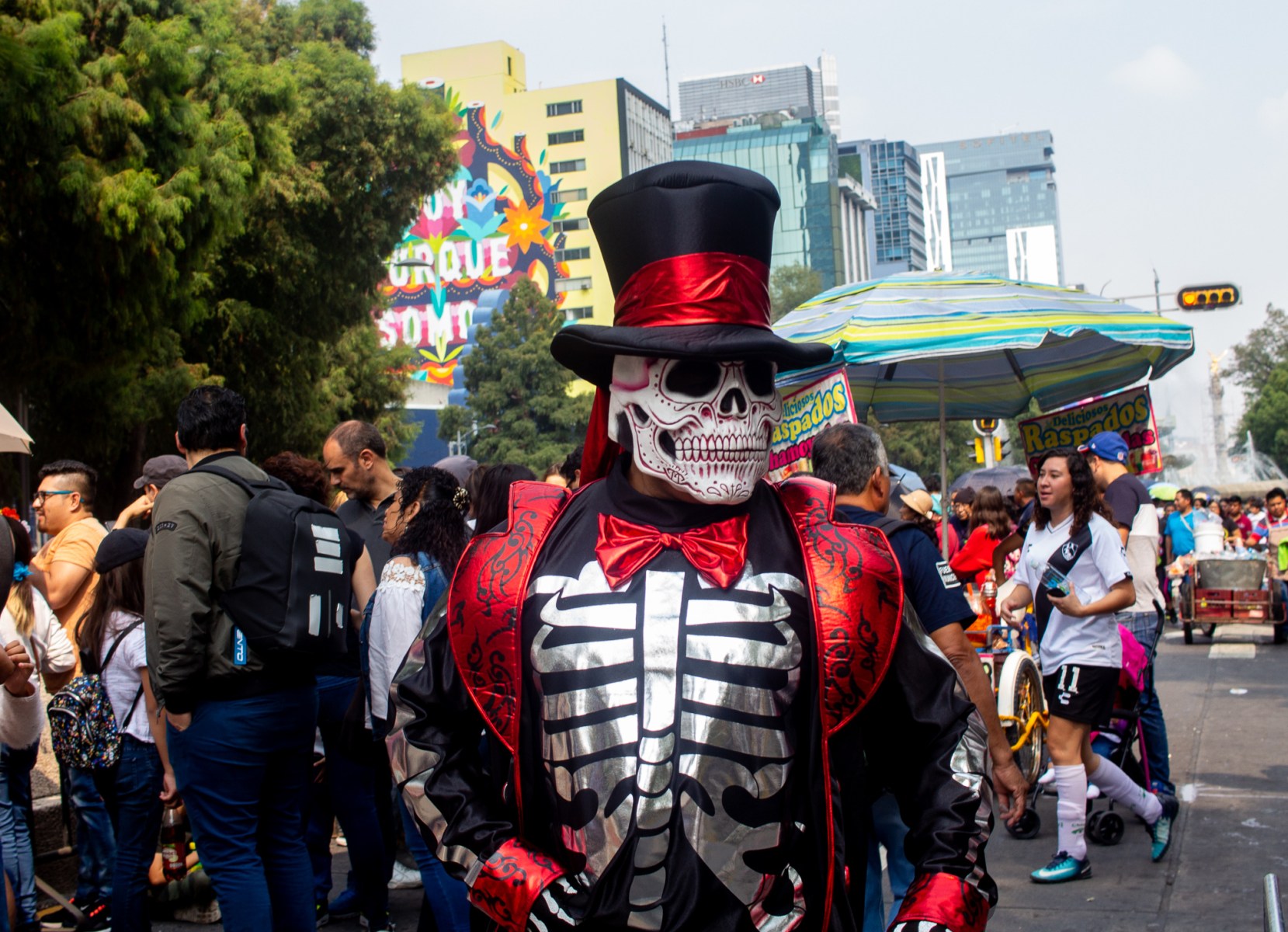 Reforma, one of the main avenues in the city, shuts down for numerous parades during Día de Muertos, and people come out in full force — some to watch, and others, like this guy, to be watched. 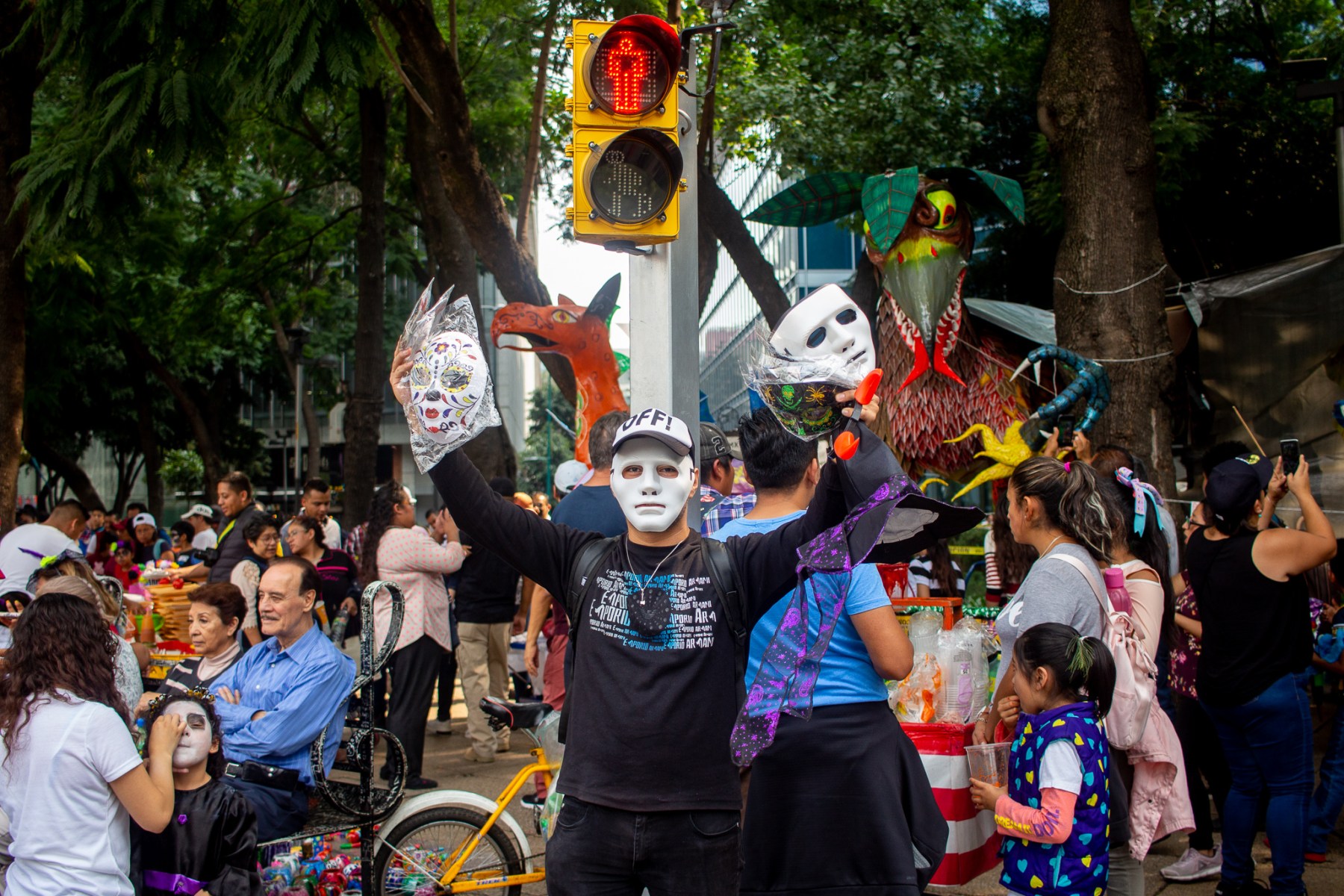 If you walk around Mexico City on any day you’ll be struck the volume of people selling things out in the street. The parades only serve to magnify this phenomenon, with countless vendors selling Día de Muertos-themed foods and costumes. 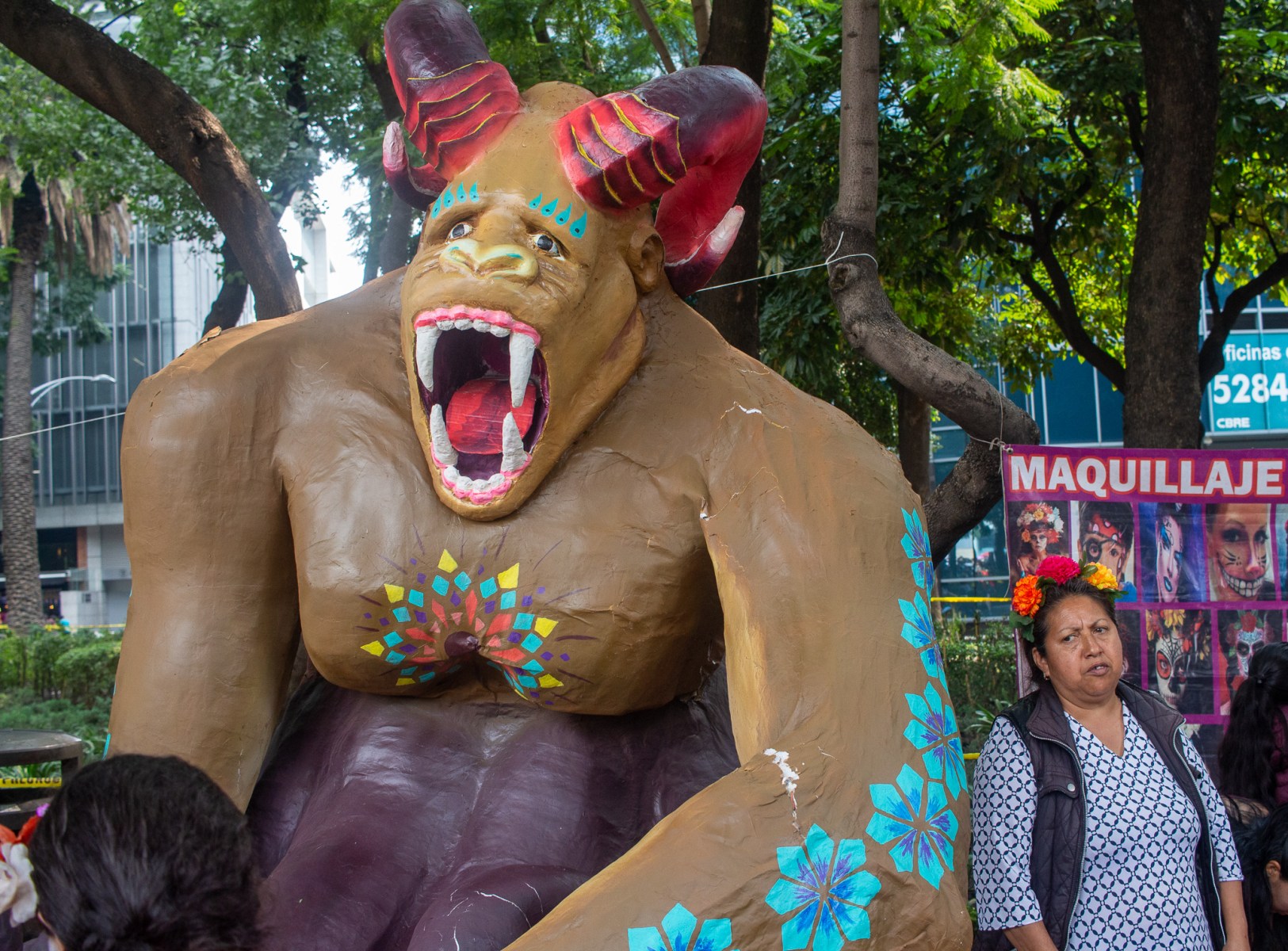 All along the parade route you’ll also see alebrijes: sculptures of fantastical beasts. The tradition started in the 1930s, when artist Pedro Linares fell ill and dreamt of magical creatures, and began making them upon his recovery. 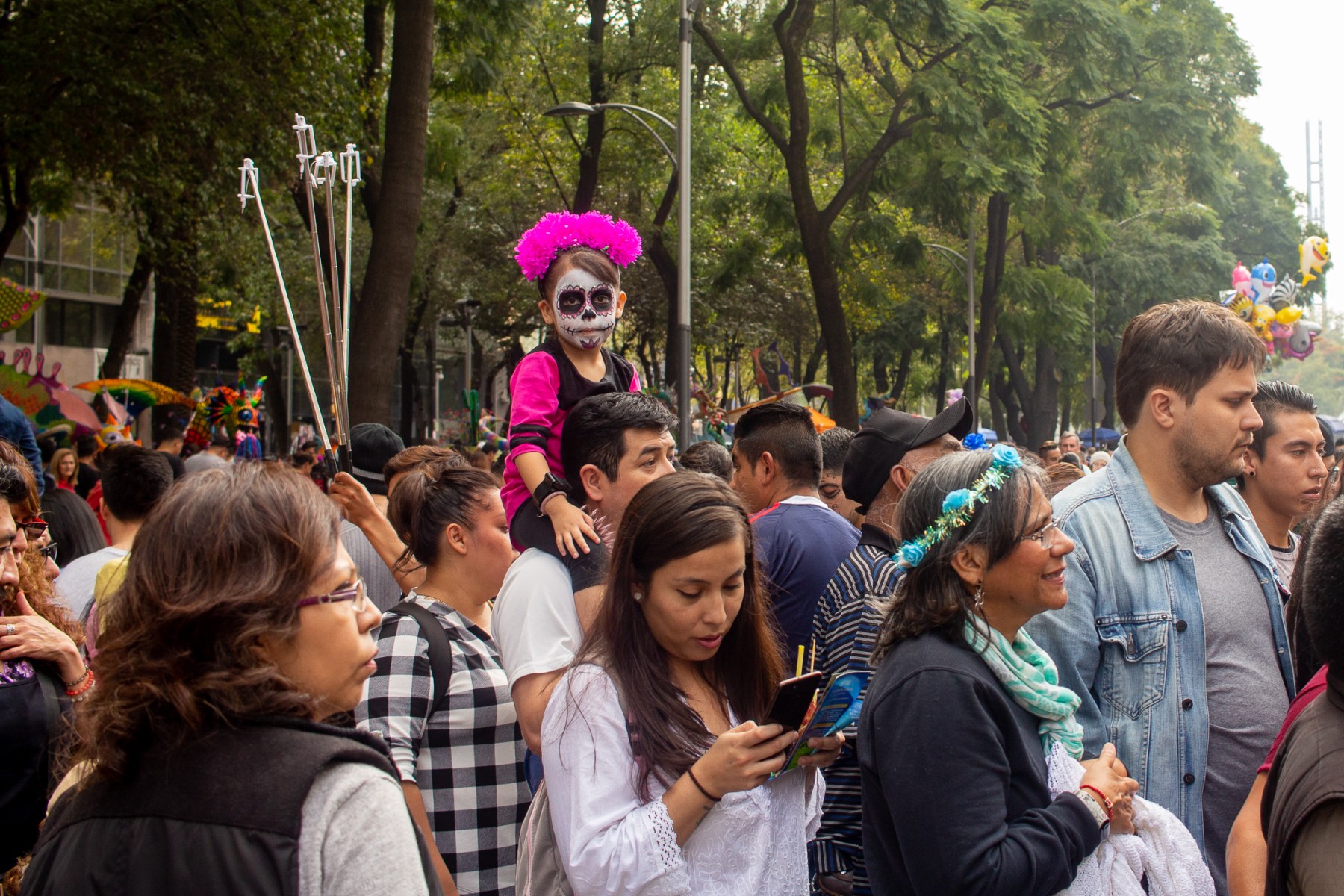 There’s a constant struggle to actually see the parade due to the buildup of bodies. Many people bring their own stools to stand on, while others hoist children on to their shoulders for better views. 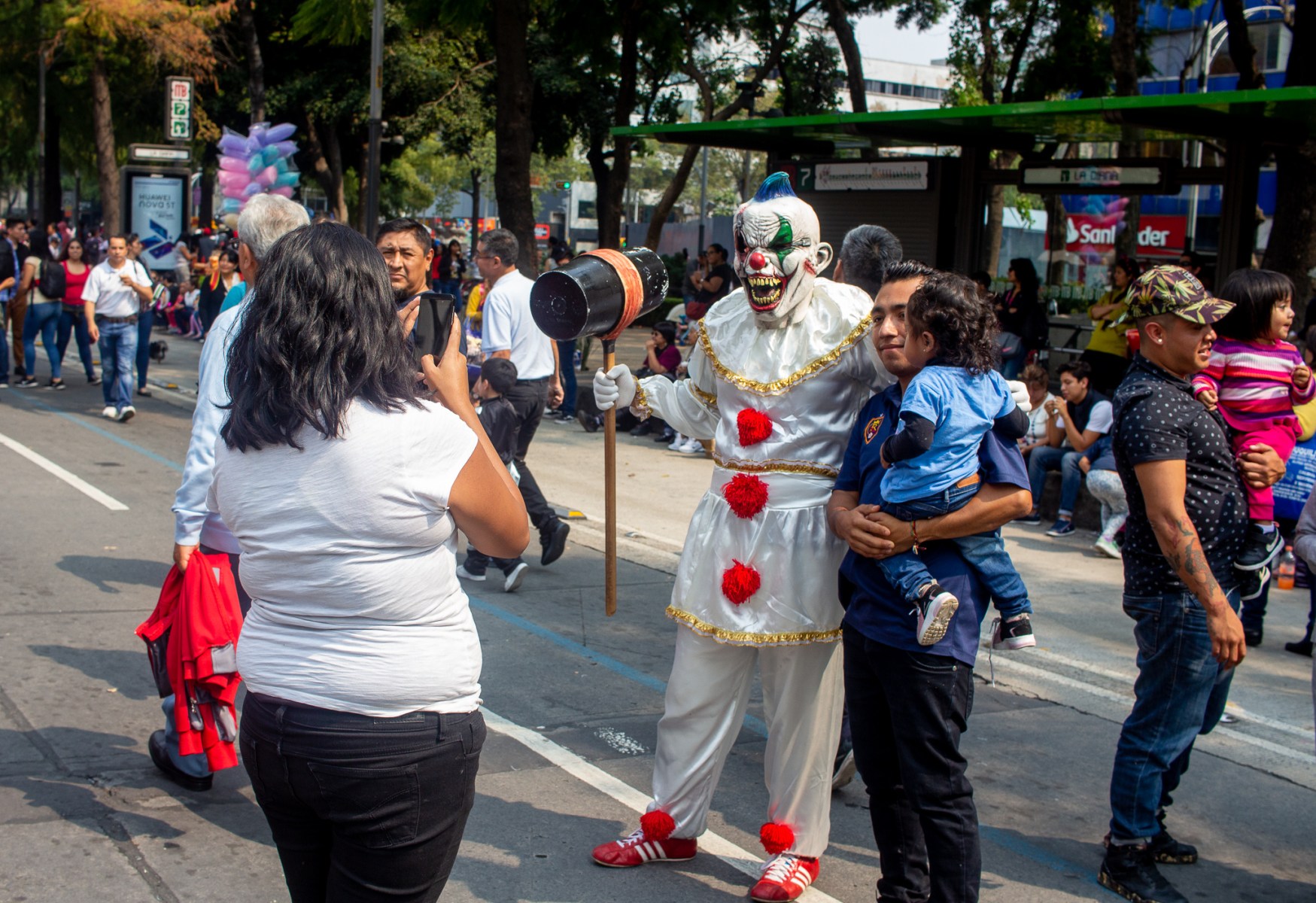 The more extravagantly dressed participants are constantly stopped for photos, especially by parents of young children. One can imagine entire photo albums of kids growing up flanked by monsters and ghouls. 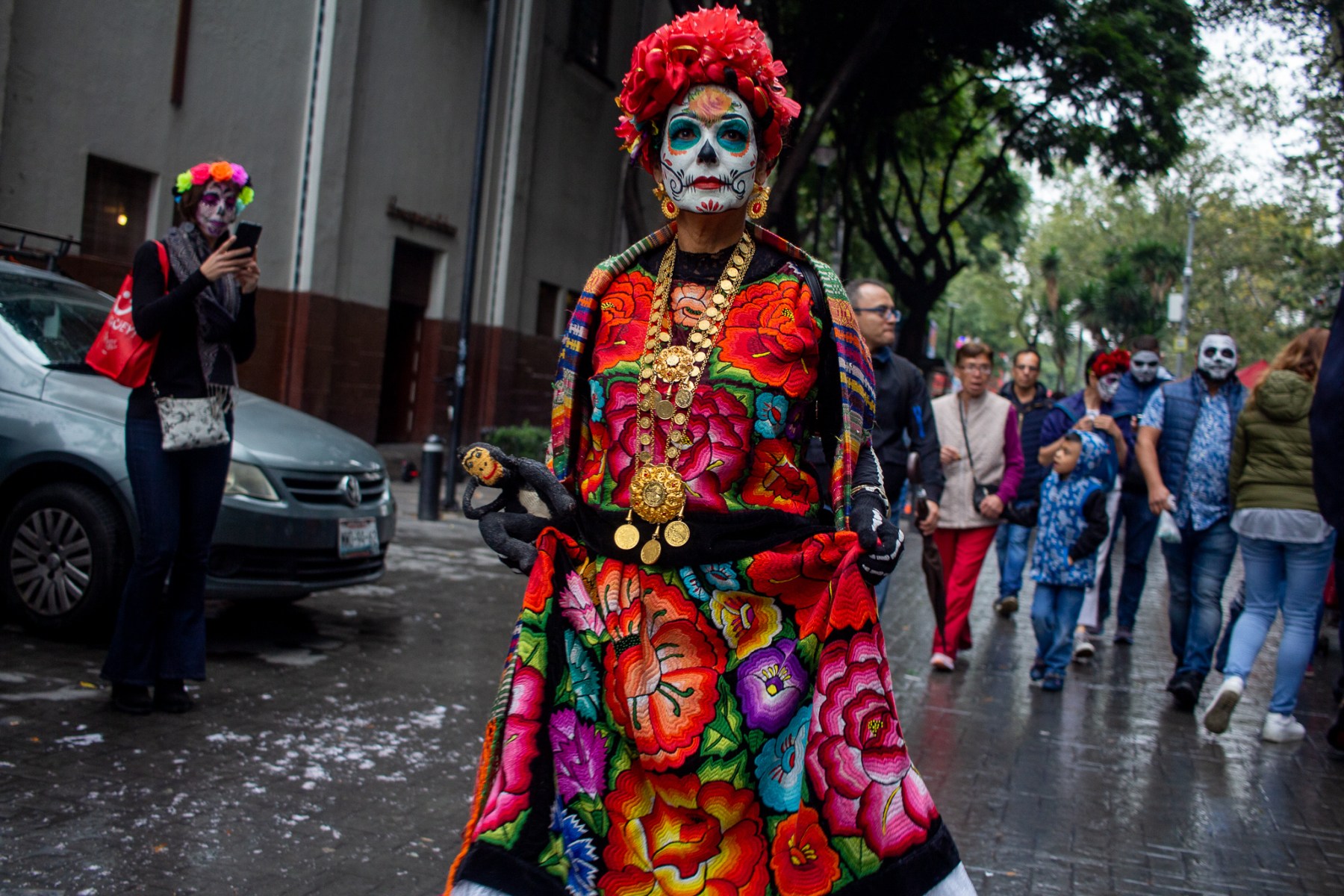 A woman with traditional catrina face paint leaves the parade. Elegantly dressed people made up like so is the enduring image of Dia de Muertos, and face painters roam throughout the streets offering their services. 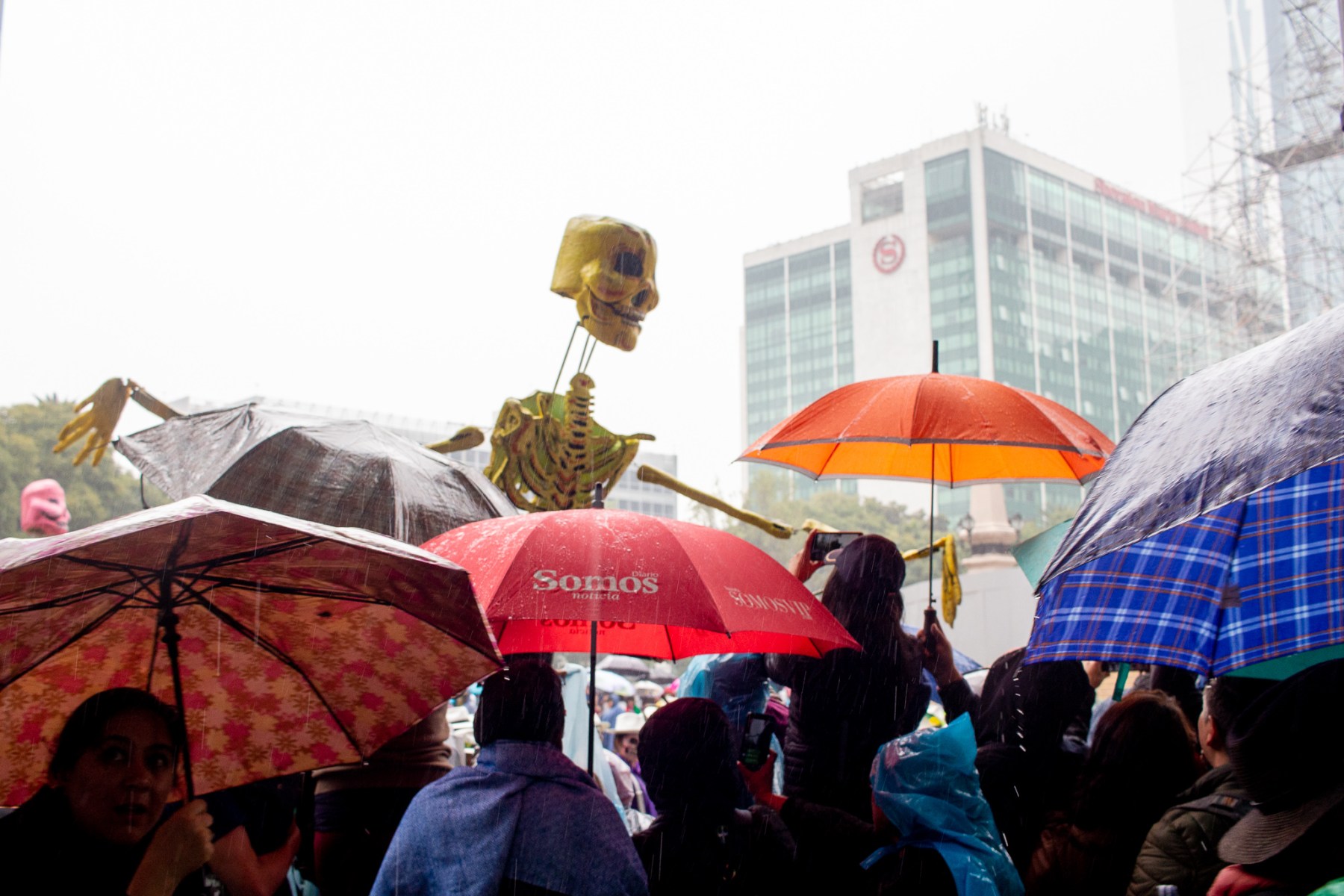 Giant floats and puppets parade down Reforma for hours. People lined up hours in advance to get a good spot; decent views are hard to come by.

At night, families gather in the cemeteries around ofrendas, altars to the dead that are filled with the deceased’s favorite food and drinks. 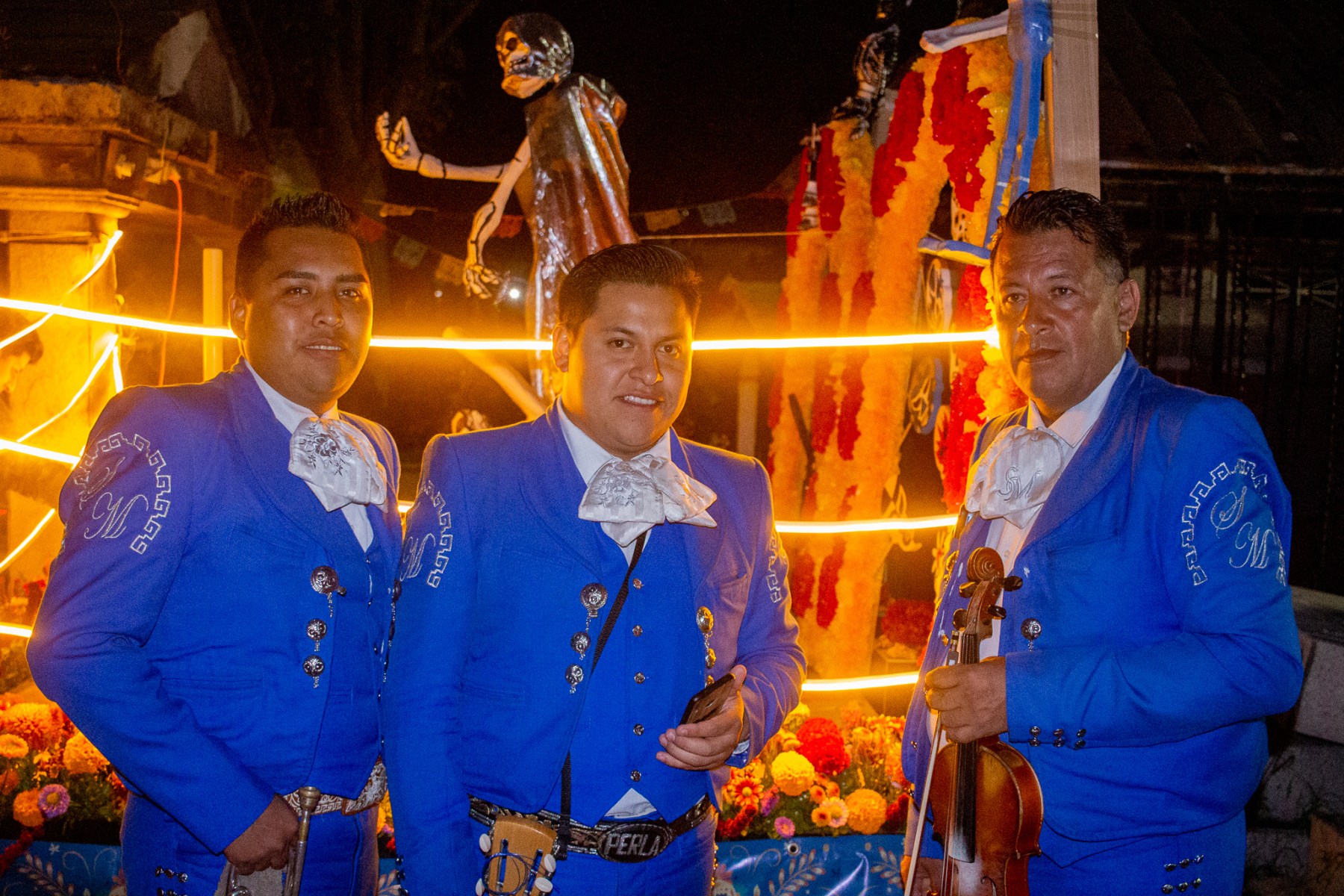 On the night of November 1st, the cemetery turns into a literal party, with relatives gathering to celebrate the lives of the deceased. Live music, such as that of these mariachis, is quite prevalent, as are chelas, aka beers. 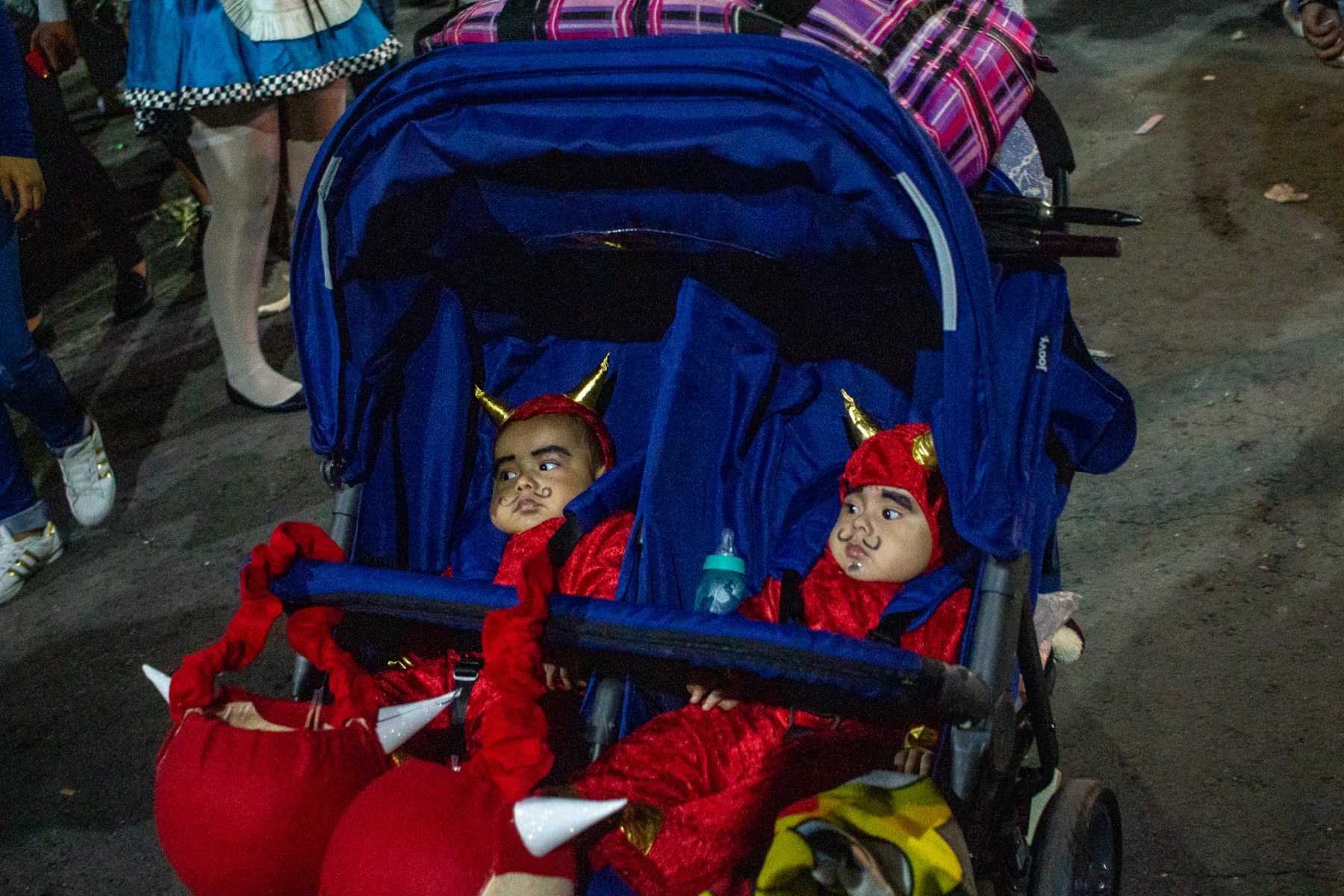 A pair of babies dressed in their finest satanic attire are wheeled along outside of the cemetery. 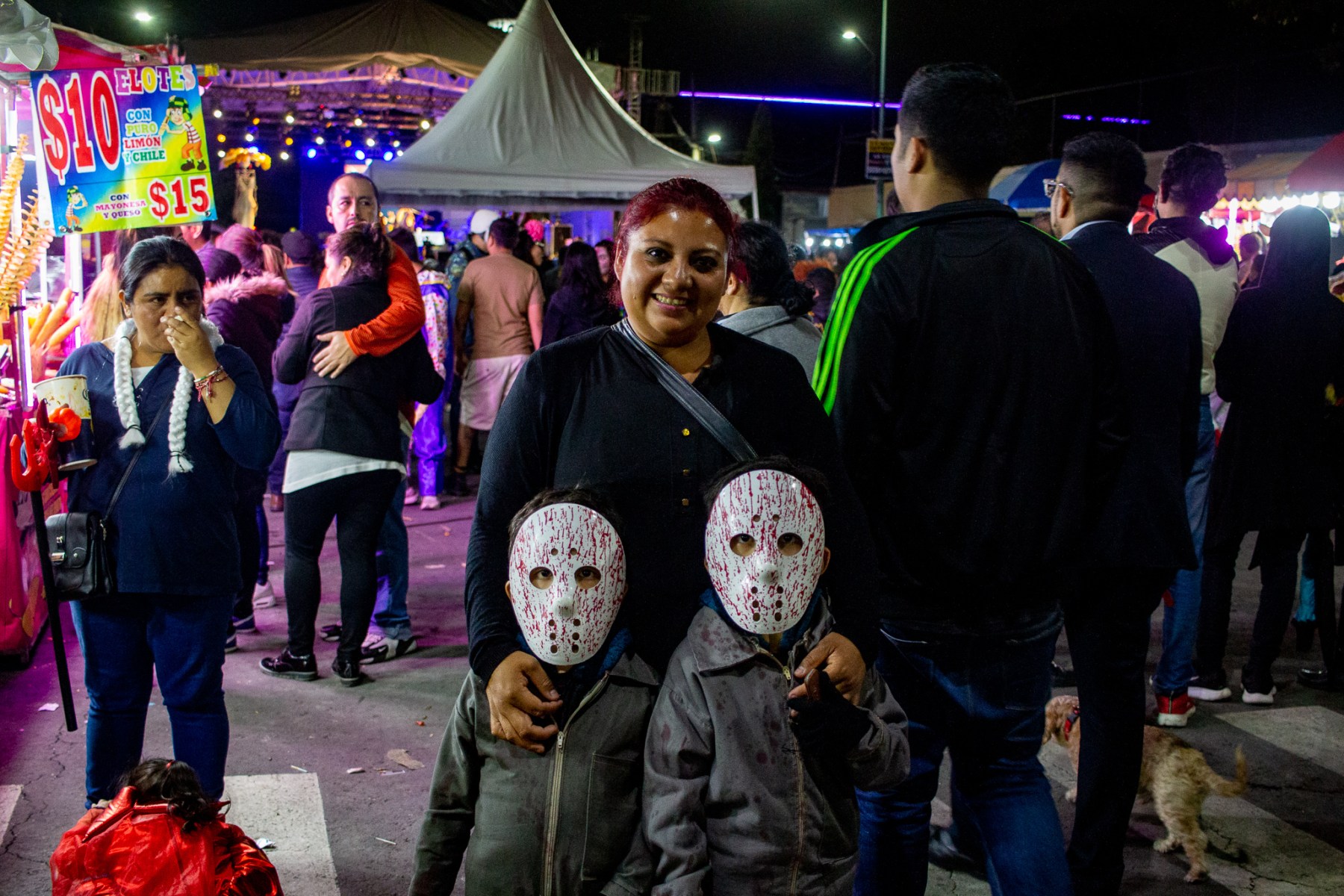 I don’t often ask people to pose for my photos, but I saw this mother leading her two children around in bloody hockey masks and couldn’t resist. 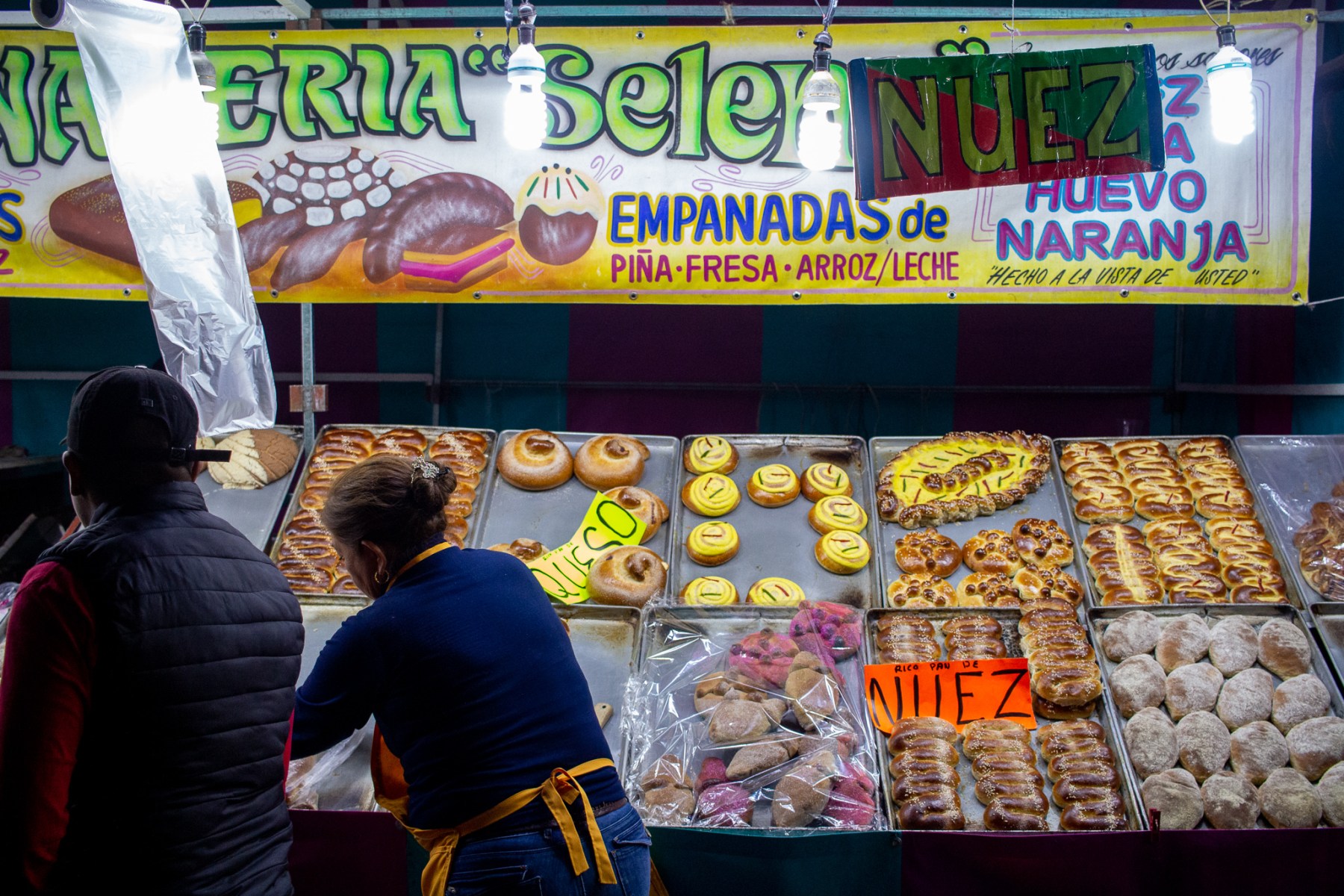 The area outside of the cemetery takes on an almost county fair-like quality, with vendors selling food like Pan de Muerto, a special type of bread eaten during the holiday. 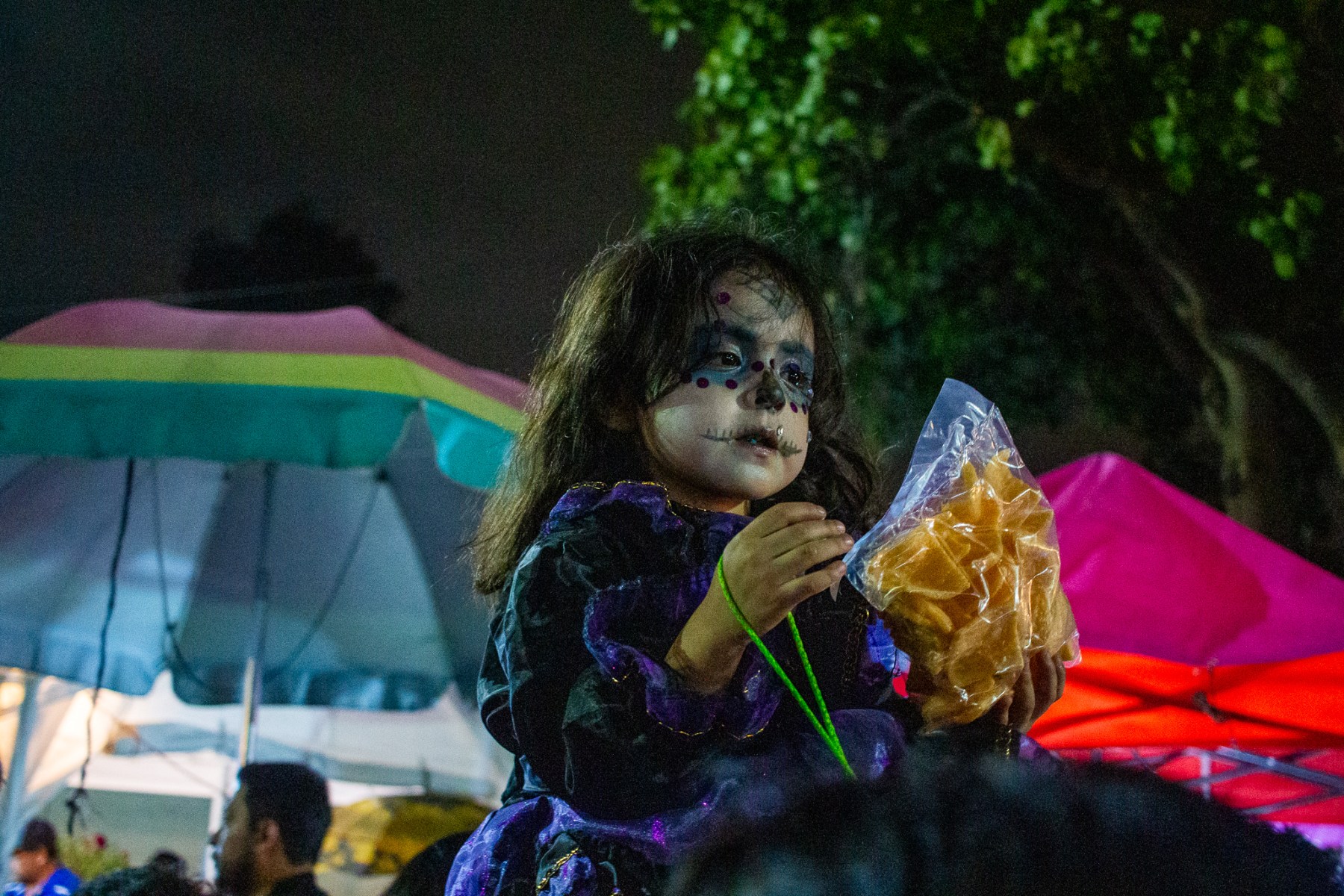 A young girl snacks on street food while riding her father’s shoulders. 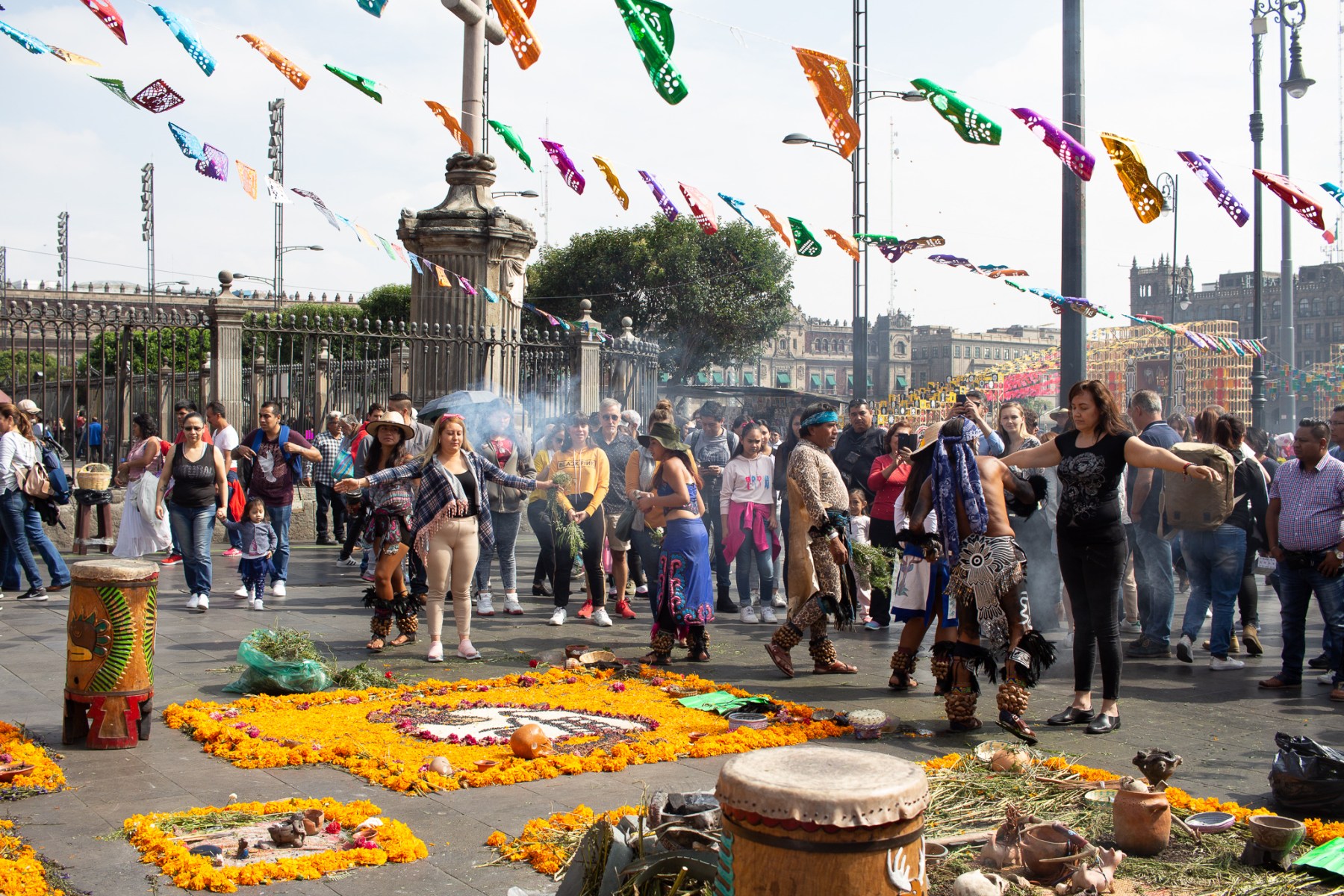 In the city center, indigenous groups perform purifying rituals for locals and tourists alike for a small fee. In the background, giant ofrendas in the main square (El Zócalo) are visited by thousands. 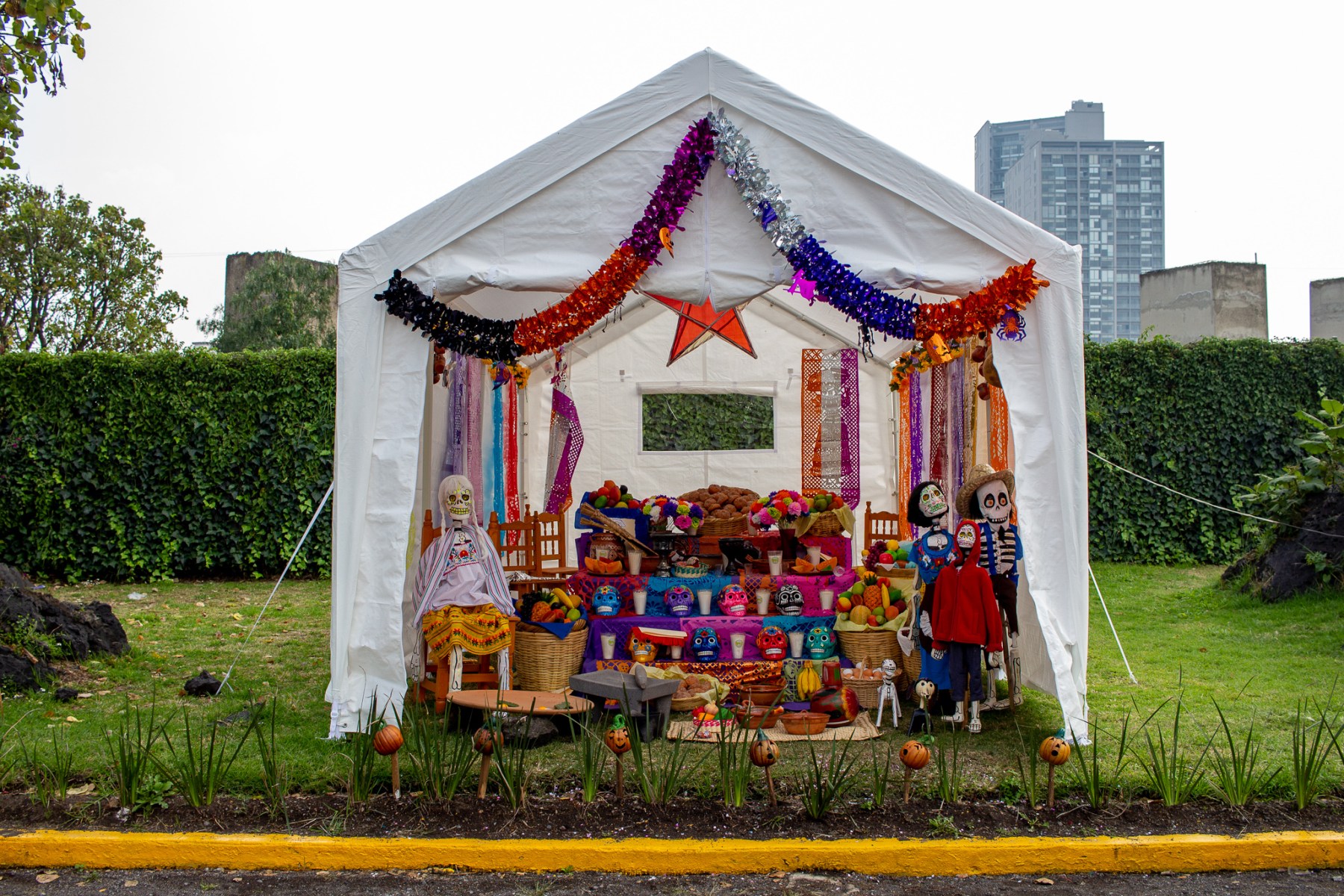 After the celebrations are over, an ofrendas remains standing at a cemetery south of the city. Some of these altars will remain there for weeks before the families take them down.

As an American who recently moved to Mexico City, I was quite excited to see what Día de Muertos was all about. The official celebration runs from October 31 to November 2, but it’s more like a weeklong holiday, with events, parades and family time scheduled throughout. In its purest sense, the holiday is a time to connect with deceased relatives who are able to come back to this realm once a year to spend time with their families. Ofrendas are set up at grave sites and families come out to dance, drink and party the night away with their relatives there both in the flesh and in spirit. All photos by Eli London (@tippington1).