The Tennessee whiskey maker let fans mix it up with their heroes in a 5-on-5 basketball game.

Basketball and bourbon isn’t a cocktail order at the rail, and the real world mix might not strike the eye as an easy marriage. But, the two came together in front of the eager eyes of Lynchburg, Tennessee, during the recent Jack Daniel’s 2018 NBA Legends Camp.

It’s important to qualify the ingredients of this athletic and alcoholic partnership. Alliteration is all well and good when one is writing an opening sentence — but Jack Daniel’s is not bourbon. It’s Tennessee whiskey. At its highest proof, the sour mash alcohol filters through several feet of freshly burned Tennessee maple charcoal before it finds its way into more local wood for its several years of barrel aging. With all that neighborhood flavor bled into the final brown drops of this water of life, Jack Daniel’s leaves the bourbon to Kentucky.

Beyond mixing up batches of the world’s top-selling whiskey brand, the folks behind Jack Daniel’s join in with other distillers and breweries around the world such as Heineken, Jameson and Miller to support the “Enjoy Responsibly” movement. To demonstrate how the sensible imbibing of fine whiskey might coexist with both playing and watching basketball, Jack Daniel’s now invites eager amateurs to learn under the expert tutelage of titular NBA legends each year at their Legends Camp. 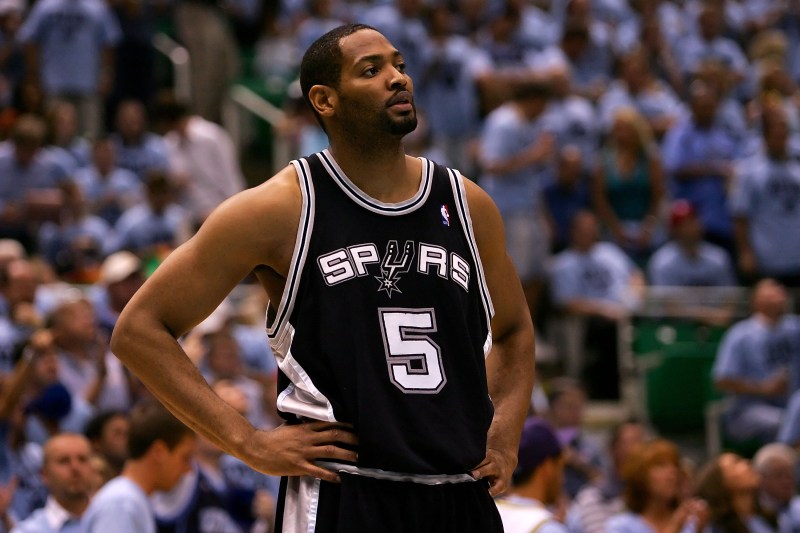 Robert Horry #5 of the San Antonio Spurs reacts in the fourth quarter against the Utah Jazz in Game Three of the Western Conference Finals during the 2007 NBA Playoffs at the EnergySolutions Arena on May 26, 2007, in Salt Lake City, Utah. (Lisa Blumenfeld/Getty Images)
Getty Images

In 2018, Robert Horry and Muggsy Bogues answered the spirited call to coaching. The veterans stepped up as Legends Camp chiefs, tuning up two teams of aspiring grownup hoopsters for a final skills competition before an enthusiastic if modest crowd of local Tennesseans. Both men serve as NBA Ambassadors in their league retirement, but Jack Daniel’s reps chose them as coaches because each brings an inspiring story.

Bogues remains the shortest player in NBA history. That doesn’t mean he failed to grow beyond his recorded 5’3” stature. It means no player smaller than that stepped foot in the NBA since the Wake Forest grad hit the league in 1987. Having his backside built a little too close to the ground didn’t stop Bogues from logging 14 seasons in the NBA and bringing the Naismith Award – the NCAA hoops equivalent of college football’s Heisman Trophy – with him from the Demon Deacons and the ACC hardwood. 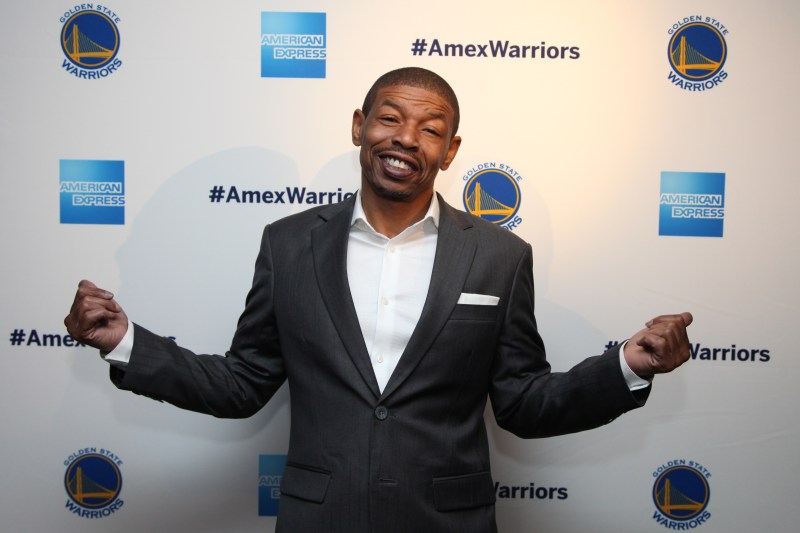 “The best part of coming down here with Jack Daniel’s is to give the fans playing in the camp a little taste of the NBA experience,” Bogues says. “They put on those uniforms in the lockers room, and we put them through warmups in front of the crowd, through the announcement of starting lineups and then into the competition. They get to be engaged with the game the way we saw it on game night. It’s fun for us seeing them go through that.”

His friendly rival on the other bench is widely known as one of the greatest clutch players in NBA history. During his 16-year NBA run with the Houston Rockets, Phoenix Suns, Los Angeles Lakers and San Antonio Spurs, Horry played for seven championship teams. He’s the only player in league history with the Boston Celtics not on his resume to hold seven rings. And, for the record, he has yet to break out and wear all seven hunks of jewelry at the same time.

“I think Jack Daniel’s definitely invited the best looking NBA ambassadors down here,” Horry insists, with Bogues’ in agreement. “It’s all about (the campers) being a part of the festivities so they can understand what happens in the NBA.”

“This is all set up like a smaller version of All-Star Weekend. With the special dinners and tours of the distillery mixed with practice sessions and the final skills challenge, we get a chance to share stories of our careers and pass on a little of what we learned in the league.” 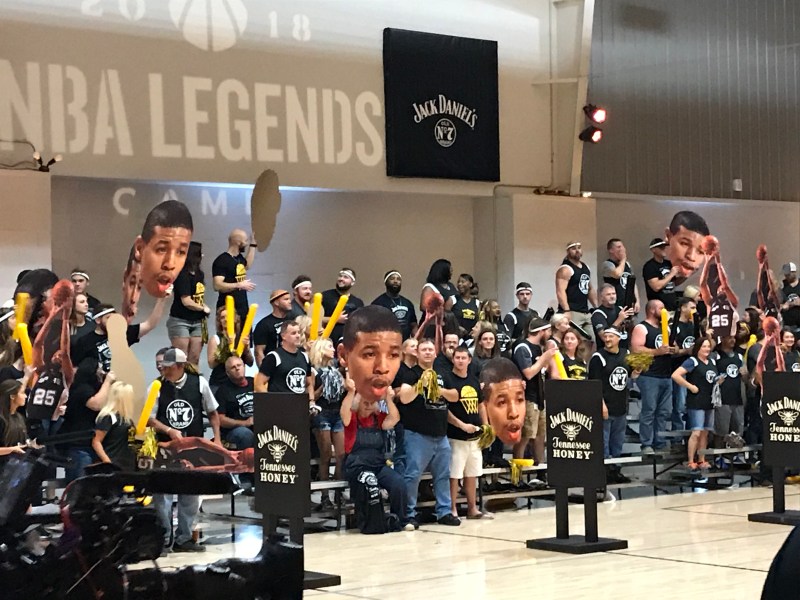 Anyone combining a love of whiskey and basketball can enter the camp sweepstakes for a chance to journey into the heart of Lynchburg and “everything Old No. 7.” This year’s crop of campers included homemakers and chiropractors, firefighters and stockbrokers.

Since athletic proficiency is not a requirement for participation, the caliber of basketball skills ranged wildly during the camp. A straight-up, full-court contest promised to end in the kind of humiliation not even good whiskey could heal. So. after a couple sessions working on their basic skills with their star coaches, attendees took to the specially prepared Jack Daniel’s court near the distillery to compete against the clock and themselves in specially designed skills competitions.

A sizable contingent of Lynchburg’s distillery employees filled up the gym’s bleachers, their hands filled with Fatheadz of Bogues and Horry, branded pompons, thunder sticks and other predictable fan paraphernalia. As The Alan Parsons Project’s “Sirius” (the famous introductory music of Michael Jordan and his six NBA champion Chicago Bulls teams) blared through the DJ’s speakers and spotlights buzzed the benches, campers took to the floor with full-on announcements of the names and standing ovations for all.

The skills contests switched between shooting, passing and ball handling. The target spots for the traditional NBA All-Star Weekend Three-Point Competition were brought in several feet, leaving the campers looking at free throws and jumpers from the elbows.

Bogues – one of the league’s quickest point guards during his NBA run — showed the way as players weaved around obstacles and passed Mr. Spalding through standing loops. The best performances received little more than applause, but the whole point of the exercises were to get the adrenaline of a simulated NBA atmosphere pumping. If a little whiskey got pumping afterward, so be it.

“We have a lot of camaraderie with these players,” Horry adds. “They came here excited about hearing some of our stories, and they leave with some stories of their own to tell.”

The 30 Best Simpsons “Treehouse of Horror” Segments, Ranked
11 Veteran WFH’ers Name the Single Most Important Item in Their Home Office
Dueling Town Halls Channel Bob Ross and Wrestlemania on "SNL"
How to Bet Week 6's Best Games, According to the Pros
On "Real Time," Bill Maher Ponders Pandemic Readiness and the Supreme Court Hearings
Why the UK's 1970s Punk Scene Is Relevant in America in 2020

Why the UK's 1970s Punk Scene Is Relevant in America in 2020
How the Best Memes of 2020 Are Embodying a Chaotic, Terrible Year
"New Yorker" Writer Suspended After Exposing Himself on Zoom