PGA Tour profesional Fred Couples raises his arms but fails to make a hole in one at a minigolf course on the plaza at LA Live on Novmber 11, 2010. An urban golf event involved sixth grade math students in Teach For America from Stephenson Middle School in E. Los Angeles and the students were rewarded for their hard work in mathematics with the funfilled golf experience. The event celebrates the upcoming Chevron World Challenge, a PGA Tour cosponsored event and the World Challenge features 18 of the world's best golfers and benefits educationfocused nonprofits. If Couples made the hole in one, then Chevron would have donated $15,000 to the education nonprofit partners. LA Live plaza was transformed on Thursday (one day only) into a picturesque urban minigolf oasis complete wth a 9hole course, sand trap, pro shop and clubhouse. Couples also gave golf pointers to the students. (Photo by Gary Friedman/Los Angeles Times via Getty Images)
By Sean Cunningham 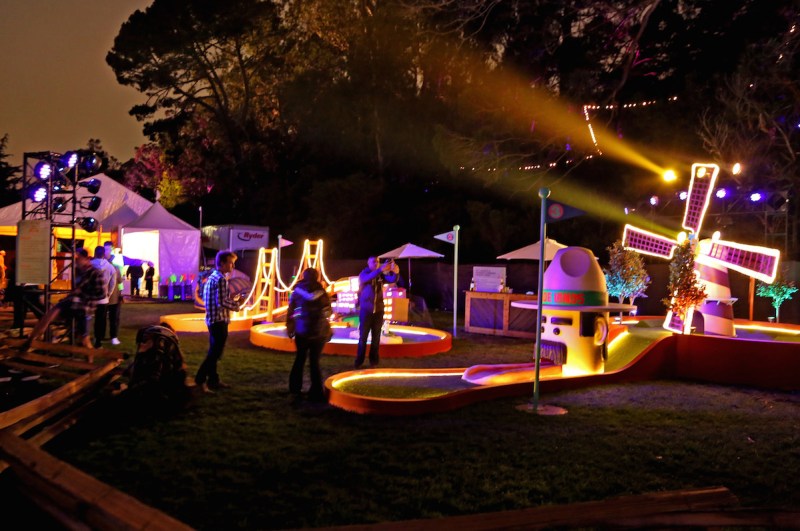 Mini golf course at the 2016 Outside Lands Music And Arts Festival at Golden Gate Park on August 5, 2016 in San Francisco, California. (FilmMagic/FilmMagic)
FilmMagic

Mini golf isn’t something you do for the money. In 2014, Olivia Prokopova won the sport’s triple crown for both genders: the United States Open, the Masters, and the world championships. For this remarkable feat, she earned very little. (Top prize at the U.S. Open: $3,500.) But even if it’s not a professional income, it is a major time commitment, as most days she practiced for eight to 12 hours.

This dedication is not uncommon among the elites of the game. Matt Male won the 2015 Masters and is every bit the fanatic Prokopova is. He started playing golf at age eight and realized he loved putting above all else, to the point he switched to mini golf so he could do it exclusively. His game is based on repetition, as he’ll “diagnose” how to handle a particular hole at a course for an upcoming tournament, then practice it with his long putter (much like the two-time winner of the PGA’s version of the Masters, Bernhard Langer) hour after hour after hour.

Watch the video below to see Male in action and take a peek into what occurs at one of mini golf’s “majors.”