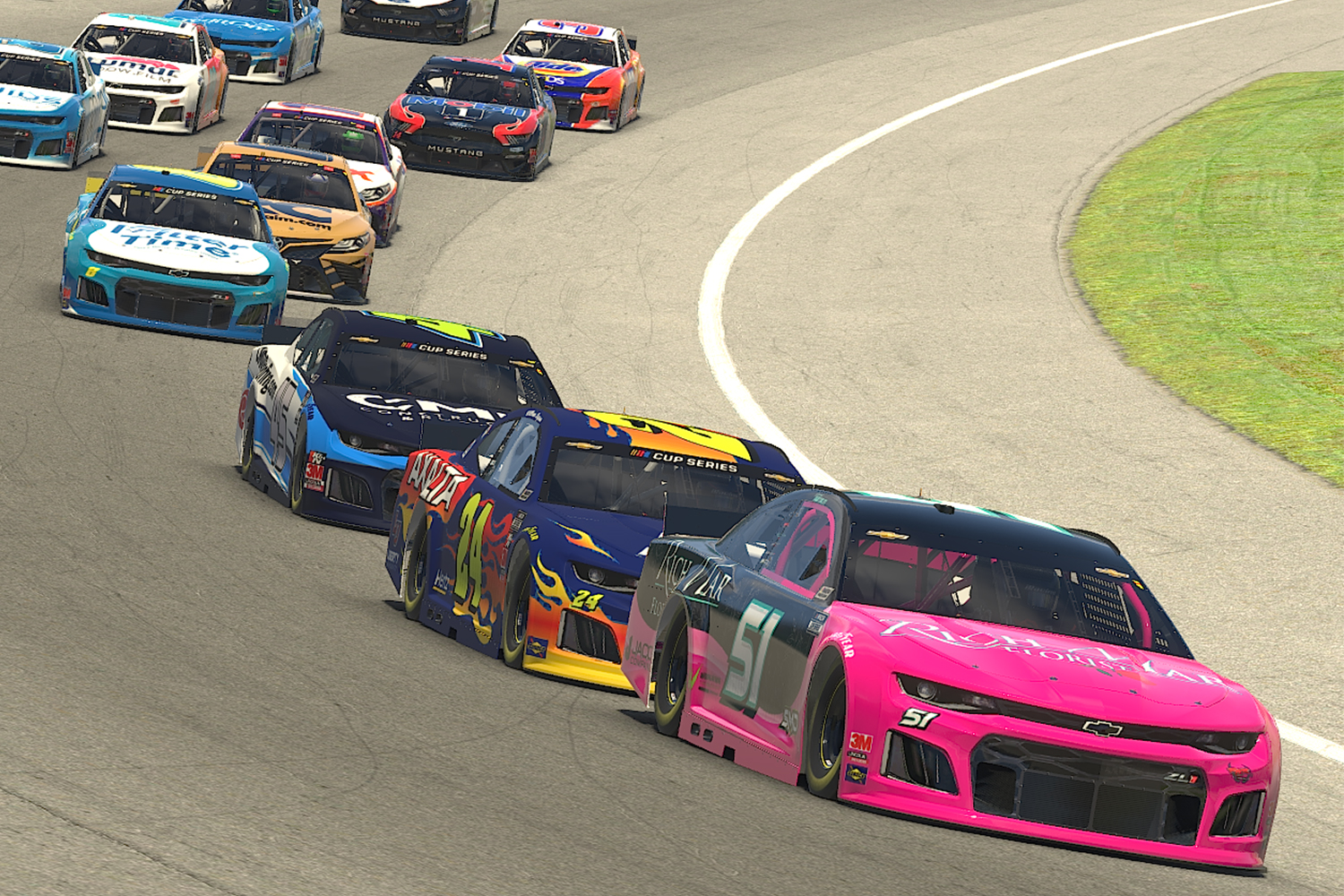 The eNASCAR iRacing Pro Invitational Series has been airing on FOX.
FOX Sports
By Alex Lauer / April 9, 2020 7:58 am

The decline in NASCAR viewership in the last decade has been well documented. With the Cup Series losing millions of TV viewers, the first-name in American auto racing has been on the defensive, seemingly more focused on shoring up its die-hard fan base than catering to new audiences. And the long-term outlook for the two other top series, IndyCar and Formula 1, hasn’t exactly been promising, either.

The reasons are many and varied, from claims that races have become boring because of rules and restrictions to a lack of larger-than-life personalities like Richard Petty and Dale Earnhardt (or even Dale Earnhardt, Jr.). There’s also the unquantifiable but no less important notion of fan disconnect: When watching the NBA, MLB or PGA, any armchair athlete can watch what’s happening on the screen and think, I could do that. But in racing? Getting your hands on one of those cars isn’t in the picture.

Of course, the NBA, MLB, PGA and every other major sports league is on an indefinite hiatus because of the COVID-19 pandemic — these racing series included. But while other sports are frantically trying to cobble together a semblance of a season, NASCAR, IndyCar and Formula 1 almost immediately moved online in the wake of shutdowns. Even though we’re only a month into quarantine in the U.S., top drivers have already been racing from home, with their showdowns streamed online and even shown on live TV.

In one of the rare bright spots of the coronavirus outbreak, auto racing may be the sport that comes out of all this in pole position.

On Tuesday, March 17, NASCAR announced the first ever eNASCAR iRacing Pro Invitational Series, and every Sunday since, exhibition races have been shown on Fox, FS1 and the Fox Sports app (they’re taking this Sunday off for Easter but will be back on the 19th). IndyCar has also partnered with iRacing for its online bouts, but on April 1 they got an upgrade from YouTube and Twitch to NBC Sports. Formula 1 took a different tack, using the F1 2019 video game from Codemasters and streaming the races on its website and other online platforms.

Whether or not you care about the normal trappings of race day — slugging Natural Light in the parking lot, the smell of exhaust and burnt rubber — race fans and newcomers are probably both thinking the same thing: We’re supposed to watch these drivers play a video game?

Technically, yes, that’s what these organizations are proposing. While that may seem crazy at first, remember, interest in esports has been growing exponentially for years. And after ratings have come in from the first few televised races, while it’s tough to compare to the real thing just yet, the results are promising; according to NBC Sports, the March 29 race at a virtual Texas Motor Speedway drew over 1.3 million viewers, making it the most watched TV esports event ever.

What’s so enticing about a virtual race, and what makes auto racing better suited than other sports to this digital pandemic landscape? There are more than a few reasons.

You want danger? You got it.

Ever since there have been cars, there have been car races, and whether or not people readily admit it, some of the appeal has always been the potential for a fiery crash. It’s at least part of the reason why people went in droves to see Ford v Ferrari but didn’t subsequently get hooked on endurance racing. Modern car racing is, thankfully, relatively safe, but that also means it’s lost some of its edge. Obviously we’ll take the trade-off every single time, but with virtual racing, you don’t have to. Bumps, collisions and full-on wrecks have been abundant in the races so far, and as such, software developers have been working to make them more realistic. One actually ended up being one of the biggest sports stories of the week, when NASCAR driver Bubba Wallace “rage quit” after getting in a wreck and lost his real-life sponsor.

When everyone’s online, the personalities can shine

Even if you don’t follow the NFL, NBA or UFC, you know some of the top stars in the leagues; their personalities often eclipse the competition itself. But can any non-fans name a Formula 1 or NASCAR driver? Probably not. But because the races have moved online, leveling the playing field in part by changing the necessary equipment from a car to a racing simulator, more people have a chance to become a contender. That could mean esports players crossing over or non-athletes coming into the mix, and in the case of NASCAR, it has already meant bringing people out of retirement. Dale Earnhardt, Jr., who has been semi-retired and acting as a commentator, has come back for the eNASCAR series. Not just that, but he put it out there that he’d be interested in participating in a virtual IndyCar race, opening up the exciting possibility of a racing series crossover (let’s get some F1 young guns in here!). And on Wednesday, he got the call; Earnhardt will be driving Indy on Saturday.

Anyone can be a driver

Part of the reason auto racing has had such success is that their platforms for virtual competitions were already developed. NASCAR and IndyCar had their iRacing partnership, and Formula 1 had Codemasters. So while the quick thinking of the organizers is still to be commended, much of the infrastructure was already in place to broadcast these races from home. But the benefit of those gaming ecosystems extends far beyond the professional sphere. Anyone can be an iRacing driver or play F1 2019 with a computer or video game console, taking away the aforementioned exclusivity. That said, pros still hold an advantage when it comes to equipment as they’re playing on full-bore simulators, not computer keyboards. Never heard of a simulator? Check out a few NASCAR setups:

Racing is ripping off the bandaid of TV viewership

Remember that whole thing about racing TV numbers being down? Well, to be completely honest, that was a bit of a misdirection. You see, any race fan knows that a good chunk of the audience, especially the younger fans, aren’t sitting down with a bowl of Cheetos and turning on Fox Sports to get their racing fix. They’re watching YouTube clips, following F1 drivers on Instagram and streaming esports races on Twitch. So by being forced into this virtual zone, all these racing series might actually get one step ahead of the rest of the sports world and learn what it’s like to reconfigure their audience for a digital future.

Of course, the potential for changing the landscape of racing, and sports in general, comes down to how long this pandemic lasts. Maybe there will be an auto boom when this is all over thanks to cheap gas and itchy pedal feet, but for now, you might want to order a force-feedback steering wheel and comfier gaming chair.