Macaron lovers, this one's for you

While seeing French macarons at Montréal-Trudeau or CDG International Airport may come as no surprise, the Gaby et Jules stand in Concourse A of Pittsburgh International Airport sets the expectation that the Pennsylvania city has an exciting international food scene worth exploring. And it does, especially in neighborhoods like Shadyside, Squirrel Hill and East Liberty, where you’ll find Paris 66, as well as the two current Gaby et Jules retail locations.

The name Gaby et Jules refers to the grandfathers of partners Frederic Rongier and David Piquard, both of whom harbored dreams of opening their own patisseries in France. Rongier is from Paris, while Piquard, a decorated pastry chef, hails from Metz in the Alsace-Lorraine region. Fred’s wife, Lori, is the other partner. They met while studying at Penn State University, which is less than one hour from her hometown of Altoona.

After Rongier completed his study abroad at Penn State and Lori graduated, the cross-continental couple spent a decade in France before settling permanently in the United States. According to Rongier, Pittsburgh was a compromise. The fact that Altoona’s population is less than a quarter of Paris’ 13th arrondissement (where he grew up) came as a culture shock to the city boy. And Pittsburgh (which he still loves and has no regrets about relocating to) was the nearest major city.

Four years before Gaby et Jules, the Rongiers opened Paris 66 on the border between Pittsburgh’s East Liberty and Shadyside neighborhoods. The name is a reference to the year of Fred’s birth, and the concept is Paris meets Pittsburgh. Under the tabletops, you’ll see photo replicas of early 19th-century postcards, taken by his great-grandfather who was a photographer. The simple menu is one page, with a different version for Sunday brunch.

The ebullient Frenchman claims that the building that houses Paris 66, which was formerly a jewelry store, is the oldest building in the neighborhood. A year after it opened, Piquard joined as head pastry chef. According to Rongier, the macarons they offered for dessert became a big hit with patrons. People were coming in just to buy them to go, and the following year, they won an award for best macarons in the city. That was the inspiration for Gaby et Jules, which is now Pittsburgh’s most well-known macaron retailer and wholesaler.

On any given day, you’ll see at least a dozen different macaron flavors on display. The Forbes Avenue location has a larger selection but a smaller seating area than the one in East Liberty, which is more of a proper cafe. Of course, there’s also the location in Pittsburgh International Airport. 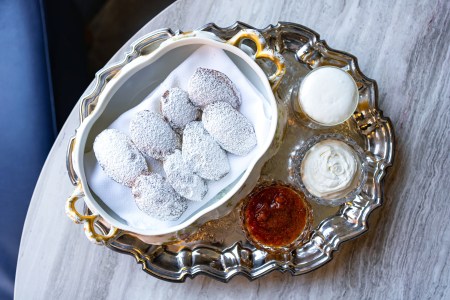 A Michelin-starred chef shares his recipe for madeleines

The macaron flavors are relatively standard, with the exception of the Pittsburgh — peanut butter macarons with black and gold shells to match the city’s three primary professional sports teams. Salted caramel, almond and vanilla are the best sellers, but there’s one macaron that you won’t find at any of the retail locations. Gaby et Jules’ decadent foie gras macarons — which come with truffle kewpie mayo and caviar — can only be ordered off of Palm Court’s 12-page afternoon tea menu at Manhattan’s world-famous Plaza Hotel.

Even the least observant among us would recognize Rongier’s laser-sharp focus and attention to detail in the first five minutes of meeting him. When running the counter, he greets everyone with an energetic “bonjour” and is quick to answer any questions.  Despite not being a trained pastry chef, he’ll point out that a shiny macaron means too much sugar and tell customers how it takes three days to make one properly. He recommends refrigerating and consuming them within 10 days or freezing for up to a year.

While Gaby et Jules is known for macarons, that’s less than half of what’s on offer at the two city locations. The pear, orange and raspberry pastries look so meticulous that you feel slightly guilty after digging into the seemingly flawless edible works of art. The bakery’s chocolate royale is garnished with an edible gold leaf for an opulent touch. The coffee, chocolate and vanilla eclairs have a cookie-like crunchy exterior with a smooth-as-silk, creamy middle that’s in perfect contrast to the outer shell.

Locally, Gaby et Jules supplies two Whole Foods locations and a couple of country clubs. The high-end Nemacolin Resort is also a wholesale customer. But anyone can place an online order and have the macarons shipped via either USPS Priority or FedEx. They’ve shipped macarons as far as Dubai.

As for the future, there are a couple of ideas in the works. Rongier and his partners are considering a third city location in Fox Chapel. According to him, they already have a spot in mind and are also considering franchising.

While the macaron recipes stay on lock, Fred was happy to share their galette recipe. 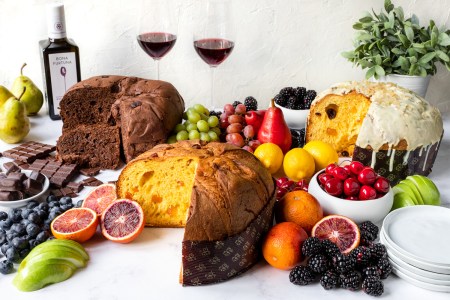 This Panettone Will Put Your Grandma’s Recipe to Shame