At Manhattan's iconic Sarge's, an "alternative" version of a deli staple has arrived
Eli London
By Eli London @elilondon100 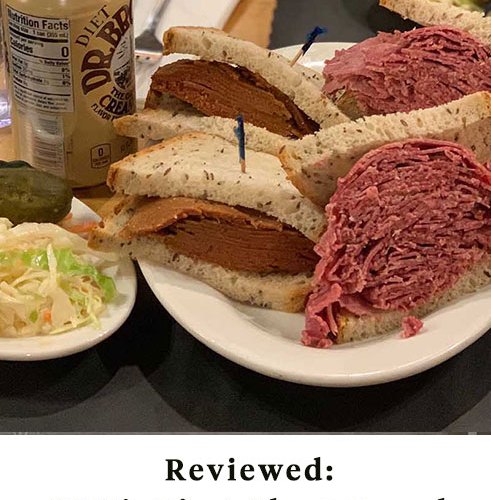 When I was 11 years old my family and I embarked on a three-week cross-country road trip from Cleveland to the Pacific Northwest and back. We mostly traveled on backroads eating in small mom-and-pop restaurants, which I would recommend everyone does. One thing I would not recommend is a tragic mistake I made along the way, when we found ourselves at the Tommyknocker Brewery in Idaho Springs, Colorado.

There, having seen nary a quality bagel or deli in weeks, I was delighted to see a corned beef sandwich on the menu. Both of my Jewish parents looked at me with apprehension and shook their heads before laying upon me a life lesson I will take to my grave: “I wouldn’t order that. There are no Jews in this town.”

Of course I was 11, so I ordered it, took one bite, proclaimed it yucky and asked if I could order something else. Luckily my parents obliged, but only on the condition I never try a stunt like that again.

The whole point of this anecdote is not to paint my parents as zealots (I wasn’t even mitzvah’d), but to lead us to the obvious conclusion that given New York’s booming Jewish population, it has some pretty damn good deli meats. So when I saw a recent Grub Street article confirming that Sarge’s, a Murray Hill institution since 1964, is now slinging plant-based corned “beef,” I knew I had to try it. I also realized this was too big of a responsibility to take on alone, so I enlisted the help of fellow skeptic and born-and-bred New Yorker Josh Goldstein.

Unless you’ve been dwelling in a jar full of salty water and pickling spices for the past few years, you know that plant-based meats are having a moment. For both very real environmental reasons and very debatable health reasons, fake meat companies are popping up everywhere, the two biggest being Impossible and Beyond, both of which have distribution deals with major fast-food chains.

The fake corned beef at Sarge’s, however, comes from Mrs. Goldfarb’s Unreal Deli, a name that immediately tells you they know their way around a seder plate. The company gained notability by securing an investment on Shark Tank, and their wares are available via mail order and, as is the point of this article, in a handful of delis around the country. Most of them are in California right now; Sarge’s is the first in New York City.

The exterior of the deli is classic New York, with a red-and-white awning and menus plastered all over the front window. The interior is more of the same, with large-armed men fastidiously cutting meat behind a counter while motherly women tend to tables surrounded by leather banquettes.

I saw no signs for the plant-based corned beef at the entrance and nothing on the menus either. When we asked our server if they had it, she looked confused at first, then realized what we were talking about. We ordered one regular corned beef and one Mrs. Goldfarb’s. Josh contested that he would rather have pastrami, but conceded after I explained to him that we needed to pit the fake meat against its bovine counterpart for a true tête-à-tête. Plus I told him I was paying, so he had no choice.

When the sandwiches arrived, the optics were striking. The real corned beef was a lighter pink shade and piled high, wedging the top slice of rye back at a severe angle. The fake corned beef was heaped more modestly, closer resembling a sandwich you would make at home than one of the piled-high creations New York delis are known for. It should be noted here that the Goldfarb’s was $6 cheaper than the real thing, which accounts for some of that difference in volume.

We first sampled slices of each meat neat, sans bread or mustard. The real corned beef was in my opinion pretty close to perfect. I like my corned beef cut lean, which can be a controversial opinion, and that’s exactly what Sarge’s delivers. It wasn’t overpowering or too salty. Josh said he would have preferred a little more spice, perhaps a passive-aggressive callback to the pastrami debate.

Next up was the Goldfarb’s, markedly darker and browner than the real thing and lacking the iconic cross-hatches connected by webs of fat that make corned beef, well, corned beef. It was more comparable in appearance to gyro meat than anything else. There was definitely flavor, but not exactly that of corned beef. We both looked at each other. “I mean it’s not … bad,” Josh remarked. And it wasn’t … it just wasn’t corned beef, or on par with some fake burgers I’ve had that were genuinely convincing doppelgangers. It had some good spices, which, going back to the gyro comparison, recalled Middle Eastern flavors. The meat is derived from chickpea, beet and tomato, so that makes sense.

When our server swung by to check on us I was curious as to what the reaction had been from other patrons who ordered the fake meat. Kathy Simonetti is a veteran of Sarge’s with 14 years under her belt, and she said she hasn’t had any complaints so far, and that diners have generally been fans of it. She estimates that she serves one or two a day, with a handful of other servers doing similar numbers.

The Goldfarb’s corned beef is something I would eat again — just not if I had a real hankering for corned beef. Sometimes I have a craving for a veggie burger over a real burger, and I could see myself seeking this out for similar reasons. Josh was less enthused, and I don’t see a future Goldfarb’s order in his future. But given Kathy’s reports of customer enthusiasm, it’s really something you just need to go and try out yourself, if you — like us — are curious and so inclined.

Those “Queen’s Gambit” Emmy Speeches Epitomized Exactly What’s Wrong With Hollywood
How a Self-Taught YouTube Martial Artist Became a Marvel Supervillain
Bill Maher Takes on the Met Gala and Charlie Sheen on a New "Real Time"
Sourdough Focaccia Is Truly the Best Focaccia. Here's One Chef's Recipe.
The Ahead-of-Its-Time Toyota FJ Cruiser Is Finally Having Its Moment
Norm Macdonald Was Quite Possibly the Best Talk-Show Guest of All Time

Searching for the Platonic Ideal of the Piña Colada in San Juan, Puerto Rico
The Ahead-of-Its-Time Toyota FJ Cruiser Is Finally Having Its Moment
Did HBO’s “The Jinx” Get Robert Durst Convicted of Murder?
Pretty Much All the Coolest Samsung TVs Are on Sale
Five Jackets You Should Buy During East Dane's Fall Sale
The First Discounts for Apple's New iPads Are Already Here
New Balance's Flash Sale Will Help You Gear Up for Fall
This Outdoor Voices Performance Long-Sleeve Is 25% Off
Get Yourself Some Le Creuset Bakeware at a Premium Discount