The Raider Way: Las Vegas Gets a Team That Leads League in Moving and Suing

SAN DIEGO - JANUARY 26: A fan of Charles Woodson #24 and the Oakland Raiders cheers before the Super Bowl XXXVII against the Tampa Bay Buccaneers at Qualcomm Stadium on January 26, 2003 in San Diego, California. The Buccaneers won 48-21. (Photo by Donald Miralle/Getty Images)
By Sean Cunningham 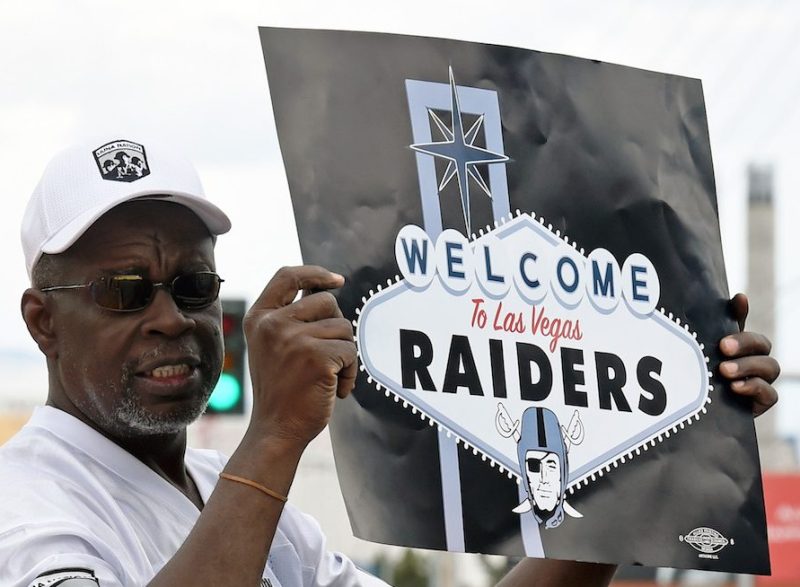 Oakland Raiders fan Davi Tole of Nevada displays a sign to passing motorists on the Las Vegas Strip near the Welcome to Fabulous Las Vegas sign after NFL owners voted 31-1 to approve the team’s application to relocate to Las Vegas during their annual meeting on March 27, 2017. (Ethan Miller/Getty Images)

The Raiders are hardly the only NFL team to decide to change cities recently: the former San Diego Chargers and St. Louis Rams have also stocked up on bubble wrap with both moving to Los Angeles.

Yet the Raiders’ exit marks one of the strangest in NFL history (it was blocked initially and has already seen them make a powerful Sin City enemy)… and it’s consistent with how the Silver and Black have always been run.

The Raiders were founded in Oakland in 1959. They moved to Los Angeles in 1982. They moved back to Oakland in 1995. And now they’re leaving Oakland again… eventually. Currently, the Raiders are planning to play at least two more seasons in Oakland. And with their proposed Vegas stadium not due to be completed until 2020, it doesn’t take a John Madden teleprompter to draw out the possibility of it being drawn out longer. (Indeed, the Raiders might have time to stop in Los Angeles again, for old times’ sake.)

Adding intrigue to the saga: The Raiders have already managed to have a very public falling out with arguably the most powerful man in Vegas, Sheldon Adelson. The casino owner worth an estimated $32.4 billion was supposed to help the Raiders build a stadium but dropped out after announcing that the Raiders were “picking his pocket” by refusing to share much of the revenue.

Oh, and in the midst of all this, the Raiders have announced they’re increasing season ticket prices on their Oakland fans by up to 50 percent, meaning they’ll pay dearly for the privilege of watching their team walk away. 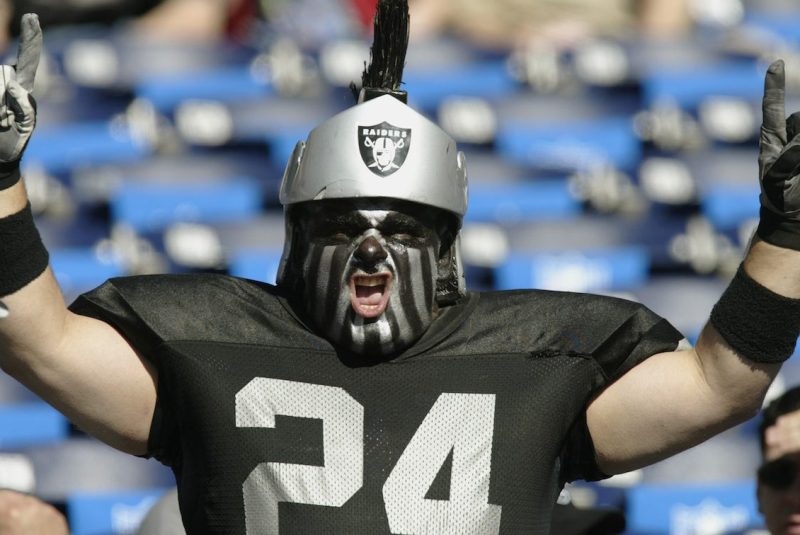 A fan of the Raiders cheers before the Super Bowl XXXVII at Qualcomm Stadium on January 26, 2003 in San Diego, California. (Donald Miralle/Getty Images)

Yet this is the Raider way as envisioned by the late Al Davis. After all, Davis sued the NFL for blocking a move to Los Angeles… and also later sued the NFL for allegedly forcing the Raiders to head back to Oakland. These lawsuits inspired such bitterness that Texans owner Robert McNair explained in 2016 why the Rams and Chargers had their move approved before the Raiders did by saying: “Oakland gets nothing. Al used to sue us all the time.” (It should be noted this was five years after Davis died.)

Of course, the Raiders’ renegade ways do have upside. Their determination to do things their own way has actually led to a surprising amount of social progress. Al Davis was willing to hire both a black and a Latino head coach when that was unthinkable to nearly all of the league. Likewise, the organization made Amy Trask the NFL’s first female CEO.

The Raiders also have a genuinely promising team now, with stars including Pro Bowl quarterback Derek Carr. (Incidentally, Carr said of the move: “While I am from California and would have loved playing in Oakland my whole career, I understand the business side of the NFL.”) If the Raiders manage live up Al’s advice and “Just Win, Baby,” surely they’ll sell Sin City stadium seats.

And if not, maybe third time will be the charm in Oakland.

I Idled in an Electric Car for 12 Hours in the Freezing Cold to See What Would Happen
"Trainspotting" is even better 25 years later
Review: WhistlePig Just Launched a Booze-Free Aged Rye
An Italian Breadstickck Fit for a 17th Century European Nobleman
The 5 Biggest Takeaways From Milan's Fashion Week
Rooftop Tents Are Suddenly Cool. You Still Shouldn't Buy One.
J.Crew's Newest Collab Is a Necessity for Hiking and Streetwear Enthusiasts Alike — And It's for a Good Cause
Snag Some Deeply Discounted Cashmere at Naadam's Archive Sale
Shirt-Jacket Season Is Almost Upon Us Once Again — If It Ever Even Left