Workspace 101: Author and Critic Daniel Mendelsohn on the Art of a Clean Office 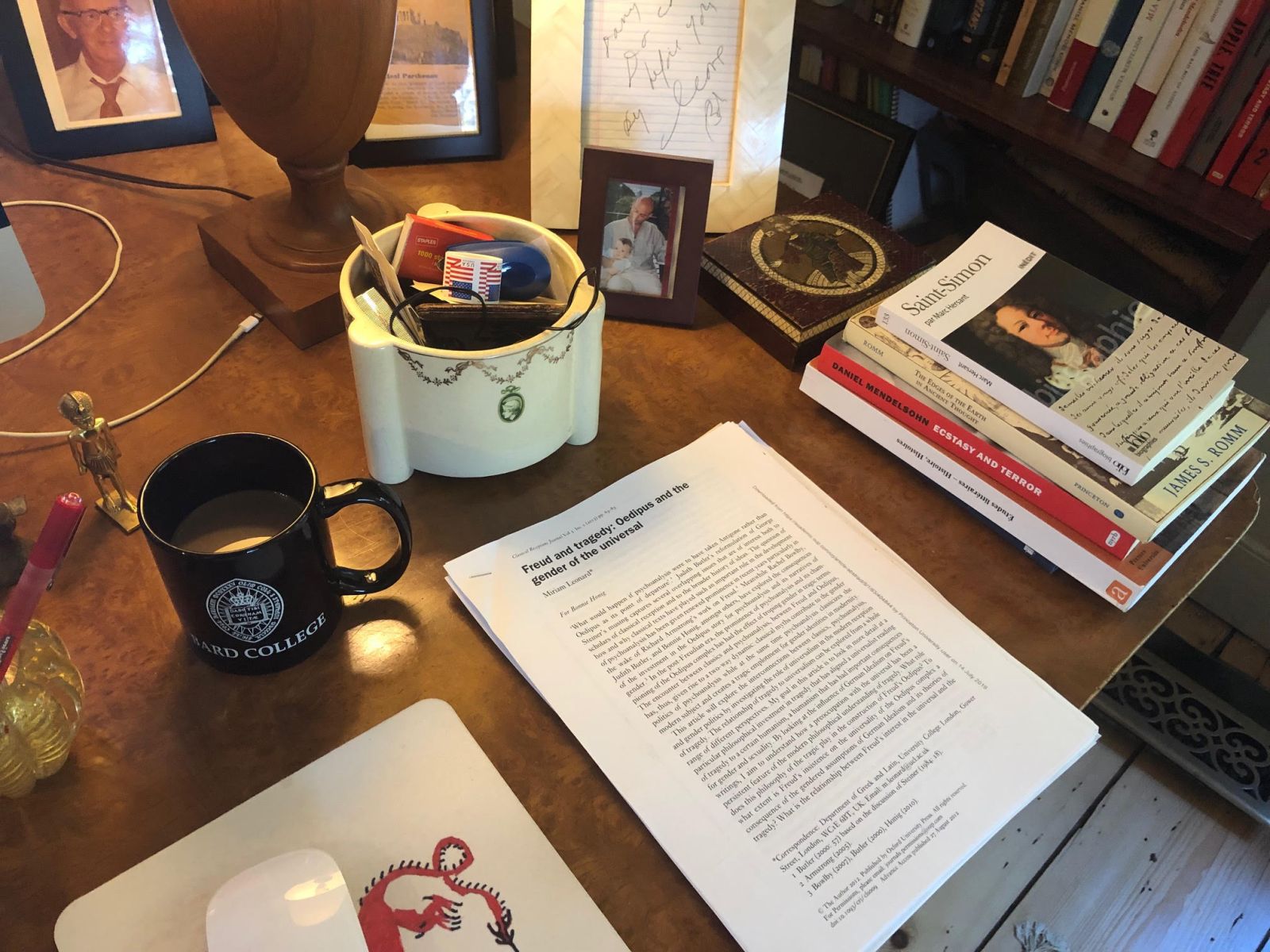 For our first installment, we couldn’t ask for a better subject than Daniel Mendelsohn. Over the last three decades, Mendelsohn has been one of our leading critical voices on everything from books to the so-called golden age of television we’re currently in. From his takes on Mad Men to his memoirs like 2017’s An Odyssey: A Father, a Son, and an Epic, Mendelsohn is a curious mind that never seems to rest. That’s why it came as no surprise to us to find that the author and critic — whose latest book Ecstasy and Terror is out now — keeps a tidy desk that he sometimes spends nearly an entire silence-filled day at.

Is your desk always so neat? It’s pretty impressive.

Yes, pretty much. I guess it can get a bit wilder when I am right in the middle of writing something — at which point there will be lots of books open and offprints of articles lying around or piled up. You just happened to catch me when I’d just turned in the manuscript of a new little book I’m publishing next year, so this definitely shows signs of post-completion-tidying-up: there’s just that discreet little stack of books at the far right. But I have to say that it basically does look like this most of the time. I like things neat and don’t work well in a messy environment.

I’m always a little wary when it comes to desks that don’t have anything on them and yours is very tastefully decorated. Why do you like having things — pictures, two lamps, etc. — on your desk

I think writers’ desks are like their work: they’re images of the writers’ mind and reflections of what matters to the writer.  I’m a memoirist and as I write, or when I look up from my writing, I like to be reminded of certain people and moments in my life and currents of things that have been important for me—these are the soil out of which the writing comes. So: there are photos of my two children, there is a photo of my late beloved friend Sarah Pettit, a founder of OUT magazine; just behind the desktop screen to the left there is a framed self-portrait of Alistair Cooke that I won in a silent auction in high school, which reminds me of my teens when the only lifeline to culture that I had were the Masterpiece Theater dramas that he hosted. To the right of the screen there is a framed photo of Proust — nuff said there — and at far right there is a framed scribbled note from Bob Silvers, a great friend and mentor to me to whom I was very close and whom I like to think about as I write. In a tiny silver frame at the far left of the desk, in front of a pile of bills and receipts to be filed, is a snapshot of a great-aunt of mine whose tragic story—she died a week before her wedding, in 1923 — was, I suspect, the seed of my interest in Greek tragedy and in family history, each of which corresponds to a strand of the writing I do: criticism and memoir.

There are a group of ancient artifacts arranged in front of my desktop that people have given me as gifts over the years, which always touches me. The two gold-glass little vases in which I put my pens I picked up at the old flea market at 25th St and Sixth Avenue in the 1990s when I was going through a demented Venetian glass phase. The two lamps were made by my godfather Nino Beltrami’s father, a master carpenter in the 1930s through 1950s, and when I look at them I think of Nino but also of craftsmanship and tradition and the inheritance of the past. And leaning against the desktop screen are two postcards from the museum in Toulouse of the remarkably moving late-medieval polychrome statue of the Madonna and Child they have there, which I think is one of the most extraordinary artworks in the world.

So when I write, I look at these things and I have a pretty good sense of who I am and what I’m doing and why I’m doing it.

How many hours a day would you say you work from your desk?

It depends. If I’m deadline it could be 15 or 16 or 18 hours: I generally write my first drafts in a day and sit there till they’re finished. If I’m in a “fallow” period when I’m doing reading and research, not so much. Just outside the frame of the picture is a daybed where I like to lie and read. It’s the bed my dad built for me when I was a small boy, which I wrote about in An Odyssey.

I’m a little curious about the two pens in front of the monitor. I’m assuming the red one is for editing, grading, etc. What’s the other? It’s nice looking.

Thanks! Yes, the vase on the right holds red pens for correcting galleys and manuscripts. The vase on the left holds a Mont Blanc pen that our great family friend Alice Forman, who went to Hunter College in the 1940s with my mom, gave me when I got my first deal contract in 1994. “You’ll need something nice to sign the contract!” Aunt Alice told me. I’m not a big pen person—I’m a lefty, and so nice fountain pens are wasted on me—but I love that pen and I do indeed use it to sign all my contracts. Usually there are a lot of cheap Uniball “fine” black rollerball pens in there, too, but they probably were in the wash the day I took the picture.

Do you need silence when you work?

Yes. I don’t understand how anyone can write while listening to music. It’s just beyond me. I don’t need silence, but I need quiet.

What does the letter from Bob Silvers [New York Review of Books co-founder] say?

“Dear Danny, Do come by before you leave. Bob.” I can’t myself remember the occasion — until this year, when I assumed my new position at the NYRB, if I was in the offices it was to see Bob, so I suppose in this instance I was down there visiting my editor or the publicist on the books end of things, maybe before one of my collections came out; and Bob must have passed that note along while I was in my meeting. I found it last year folded into a book. That “do” is so Bob; I really loved him. He and his partner Grace Dudley were the only people ever to call me “Danny.” Whenever some stranger refers to me as “Danny,” I know it was someone who was a friend of theirs.

Where did you get the desk from?

Like 60 percent of things I own, it came from the great old flea market on Sixth and 25th, which flourished until about ten years ago. There were four empty lots at that intersection — now all hideously conventional hi-rise apartment buildings — and every Saturday and Sunday they would be filled with vendors — everything from kitschy souvenirs from the 1939 World’s Fair to Fabergé guilloche frames. I used to live nearby, at Twenty-fifth between Seventh and Eighth Avenues, and would meet my younger brother Eric there at 7.30 on weekend mornings and we’d be there for hours. Anyway, one day I was walking along Sixth and I spotted this fabulous 1940s French dining table and practically jumped over the fence and got first dibs on it. It cost $400. You can’t even get a crappy end table at Pottery Barn for that.

Given your writings on the classics, I was half expecting to find a bust of some famous Greek person who lived over 2000 years ago. Would you ever put a bust on your desk, and if so, what would it be?

Busts on desks are good if you’re, like, Napoleon, but I worry about anyone else. Anyway, apart from the pretentiousness, where would you put it? In the computer era, I think busts should be relegated to somewhere else. And in fact I have a bust of the emperor Augustus downstairs (also from the flea market), along with a cast of one of the Parthenon Marbles — maybe for you next feature on writers’ living rooms?!