BRITISH AIRWAYS THREW A POSH, INVITE-ONLY
DINNER PARTY IN DOGPATCH. NATURALLY,
WE INVESTIGATED. AND YES, THERE’S MORE
TO COME. HERE’S WHAT YOU NEED TO KNOW.

When you think of two-Michelin-Star dining, you probably don’t think of pub food.

Which is fair. Because there is exactly one pub in the world with two Michelin Stars.

It’s called the Hand and Flowers. It’s in Marlow, just west of London. And for one night earlier this month, British Airways brought Tom Kerridge, its chef and proprietor, to The Pearl in Dogpatch to recreate a pop-up version of it. The event was part of Above & Beyond, a series that brings white-glove, British-inspired happenings to U.S. soil — invite-only dinners with award-winning chefs included.

We went. We feasted. We lived to tell about it.

They say a great meal is one third atmosphere, one third presentation and three thirds great food. Which is to say: ultimately, it’s what’s on your plate that matters, but a great environment doesn’t hurt.

And at Above & Beyond, the scenery did not disappoint.

After flashing a mock boarding pass at the flight attendants running the door, we were ushered into the dining room, where an intimate arrangement of tables was backlit by floor-to-ceiling projection screens bearing the interior of a plane.

Once Chef Kerridge had ambled out to announce his intentions for the night (gist: “I’m going to feed you, and excessively”), the images on the screens lurched into motion, eventually transporting us to the Westbury Court Gardens, a 300-year-old vegetable patch in Gloucestershire where we sipped parsley soup with apple, ginger and smoked eel (tasted more like bacon than turkey bacon). 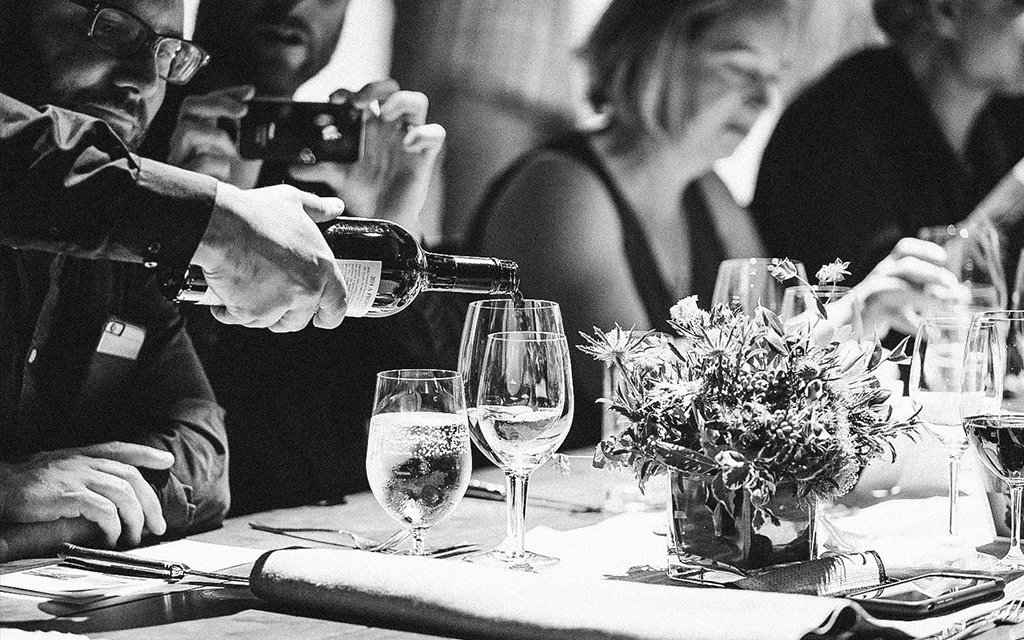 The second course brought us to Castle Coombe, a quaint stone village in Wiltshire, for Chef’s take on a traditional pork pie — which here did not mean jellied pork and a plastic wrapper, but rather delicately seasoned pork in a warm roll wrapped around a soft-boiled quail egg and bathed in curry sauce.

Next: the Highlands of Scotland for a full roast beef dinner that nearly capsized our table when the server plopped it down at the lee end. We were given a brief carving lesson before serving ourselves, which we did so in firsts and seconds and thirds, until our sides ached and fingers trembled and wine ran down our chins.

But we were not done, Chef told us with a smile something wicked. Suddenly, the dinner had become something of a trial, but one we seized upon with foolhardy abandon. There were cheese plates in the cheddar caves of Somerset. Ice-creams-on-a-stick and jellied donuts on a boardwalk in Brighton Beach. And finally, towering dessert trays and coffee service in the rafters of the Ritz London care of French Laundry patisserie chef Claire Clarke.

And then it was over, and we exchanged hearty goodbyes and laments of gluttony with the newfound friends with whom we had enjoyed our evening.

Did we mention that there will be more of these events?

That Above & Beyond is but one luxury afforded to a very lucky group of San Franciscans — those who are members of the British Airways Visa Signature Card.

It does all the things you expect a solid rewards card to do, all of which will get you a little closer to your next British vacation.

But it also does something you won’t find elsewhere: brings the magic of Britain to your doorstep, with money-can’t-buy, one-of-a-kind programs and offerings like the Above & Beyond event series.

We can’t make you sign up. But having stuffed our faces with Chef Kerridge last week, we strongly, strongly encourage you to consider it.

You’ll be proper chuffed you did.