What's more futuristic than an EV? An EV with a charging robot.

This year’s Consumer Electronics Show in Las Vegas featured a number of automakers showing off bold concept vehicles that hearkened to an increasingly electric automotive future. Among those was Ram, who revealed an electric pickup concept to CES attendees. While the electric truck was the centerpiece of Ram’s announcement, it wasn’t the only new piece of hardware Ram revealed, however. In other words: it’s time to talk about robots.

In its announcement of the Ram 1500 Revolution Battery-electric Vehicle (BEV), you’ll find another announcement nestled within. That’s for something called the Ram Charger — described as a “new inductive robot charger.” Ram’s press release states that the charger “detects the vehicle’s presence and its charging needs, and automatically moves into position and aligns itself under the vehicle.”

Autoblog has more details on the robotic charger, with Chris Teague observing that it “looks more like a Roomba than Robocop.”

The Ram Charger is designed for smart charging, with the mobile design engineered in part to mesh with the vehicle’s charging system seamlessly. And, according to RAM CEO Mike Koval, Ram Charger is headed to production. “We know from our Real Talk tour that our customers aren’t just concerned for how long a charge will last on the road, but also how easy it is to charge,” Koval said in an interview with Green Car Reports. Getting a robot to do it certainly seems like a viable answer to that question. 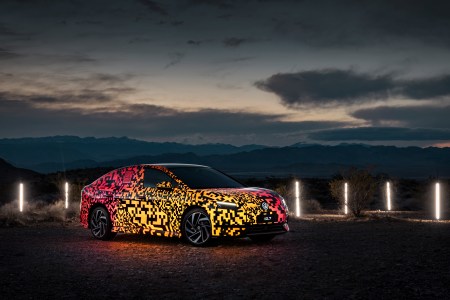