LeBron’s a Yankees Fan. Why’s He Rooting for the Dodgers?

It goes beyond the obvious Lakers connection

Heading into Game 3 of the World Series this Friday, the Los Angeles Dodgers and Tampa Bay Rays are knotted up at one game apiece. It’s been a good one so far, though MLB is struggling to get people to watch. The series is setting new records for low viewership. The last time so few Americans tuned in was 2008, when the Philadelphia Phillies took on (go figure) the Tampa Bay Rays.

In fact, social media seems more interested in the rooting interest of one person who’s watching these games, than in who’s actually winning them. And that person would be Los Angeles Lakers small forward LeBron James, who live-tweeted his reactions to the events of Game 1. James is rooting for the Dodgers, and specifically tweeted praise at Dodgers stars Cody Bellinger, Mookie Betts, and Clayton Kershaw.

The central complaint about James rooting for the Dodgers seems to be that he either can’t make up his mind about his favorite baseball team, or that he’s a fair-weather fan. Sports Twitter, it seems, would rather he just watch the game, drink his wine, and keep his thoughts to himself. But that’s misguided. For starters, stars should be allowed to wear the garb or appreciate the athletic exploits of any player or team throughout sports. Ordinary citizens do it all the time. But for whatever reason — probably because of the way he has hopped around in NBA free agency himself, changing allegiances and chasing titles — James doesn’t get the benefit of the doubt here from many fans. That’s a shame. Tom Brady got less shit for wearing a New York Yankees hat at the height of the New England Patriots dynasty.

If you trace the history of James’ MLB rooting interests, they all make a ton of sense. He’s a Yankee fan from the Midwest. That’s way more common than you think — check out this MLB fandom Facebook map — and especially for someone who was a teenager when the Yankees went to six World Series in eight years. A born competitor, who’s been to nine of the last 10 NBA Finals, it’s easy to see why he would’ve been attracted to the Yankees’ consistent success in the late 1990s and early 2000s. His support of the Cleveland Indians, meanwhile, boils to down to hometown interests. He’s from Akron, Ohio, outside Cleveland, and played for the Cleveland Cavaliers during the Indians’ most recent title runs. According to CC Sabathia, James knows it’s his responsibility to “put on a front for his city.”

The Chicago Cubs jersey photo above, meanwhile, was the result of a lost bet to Dwayne Wade after the 2016 World Series (after Wade’s hometown Cubs beat the Indians in seven games).

Which brings us to this current World Series, and James rooting for the Dodgers. Granted, he doesn’t have to post anything on Twitter, but why wouldn’t he want the Dodgers to win? He’s been in Los Angeles for a couple years now and has probably run into Betts and Bellinger at charity events. His younger kids could easily be Dodgers fans. The idea of two titles for his current city in the span of a couple weeks must be exciting. It’s sort of like going back to high school, when varsity kids, regardless of their sport, cheer on other athletes from their town.

And most importantly, since we know James is a Yankees fan — there isn’t a single, self-respecting fan of the Bronx Bombers who wants the Tampa Bay Rays to win this series. If the $60-million payroll Rays dethrone the behemoth, “Yankees of the West”-Dodgers, tri-state area sportstalk will spend the next five months laboring whether you really need to spend big in order to win a championship. A defeat of the Dodgers will be an indictment on the Yankee way of doing things, not to mention bring a ring to a franchise that ate the Yankees’ lunch all season, knocked them out of the playoffs, and then mockingly danced on their grave to the tune of Frank Sinatra’s “New York, New York.”

Besides, those Yankees-Dodgers bouts of the 1950s and late 1970s are ancient history, anyway. A truce was called the second Joe Torre headed out to LA for his second act. Do you, LeBron. Maybe next year you’ll actually get to root for the Yankees in the World Series. 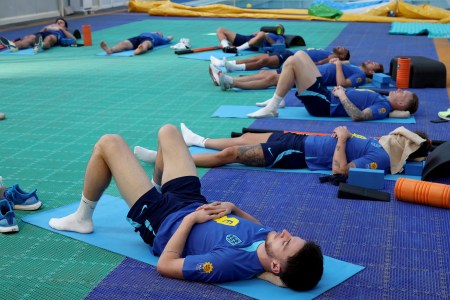