The Enduring Legacy of Elmore Leonard’s “Get Shorty”

Celebrating 30 years of the beloved crime thriller that reshaped Hollywood

Elmore Leonard was already a well-known writer of westerns during the 1950s and ’60s. But after he shifted his focus to crime thrillers, often using Detroit, California and Florida as locales and relying more on realistic dialogue and humor (while keeping his writing tight), he found his true calling.

Considered his crime magnum opus, Get Shorty is now celebrating its 30th anniversary with a beautifully illustrated 30th anniversary edition from art publishers Folio Society. Undoubtedly, more people know the book from its 1995 film adaptation, but its influence in literature and Hollywood really starts with the source material.

“While the argument of who is the best American crime writer of the 20th century could encompass at least 20 candidates and rage as long as the century itself, it would be hard to characterize Elmore Leonard’s creative burst during the whole of the 1980s as anything but a sustained – and quite possibly unequaled – bout of excellence,” as author Dennis Lehane (Mystic River, Gone, Baby, Gone) notes in The Guardian (Lehane also provides the intro to Get Shorty‘s re-release). 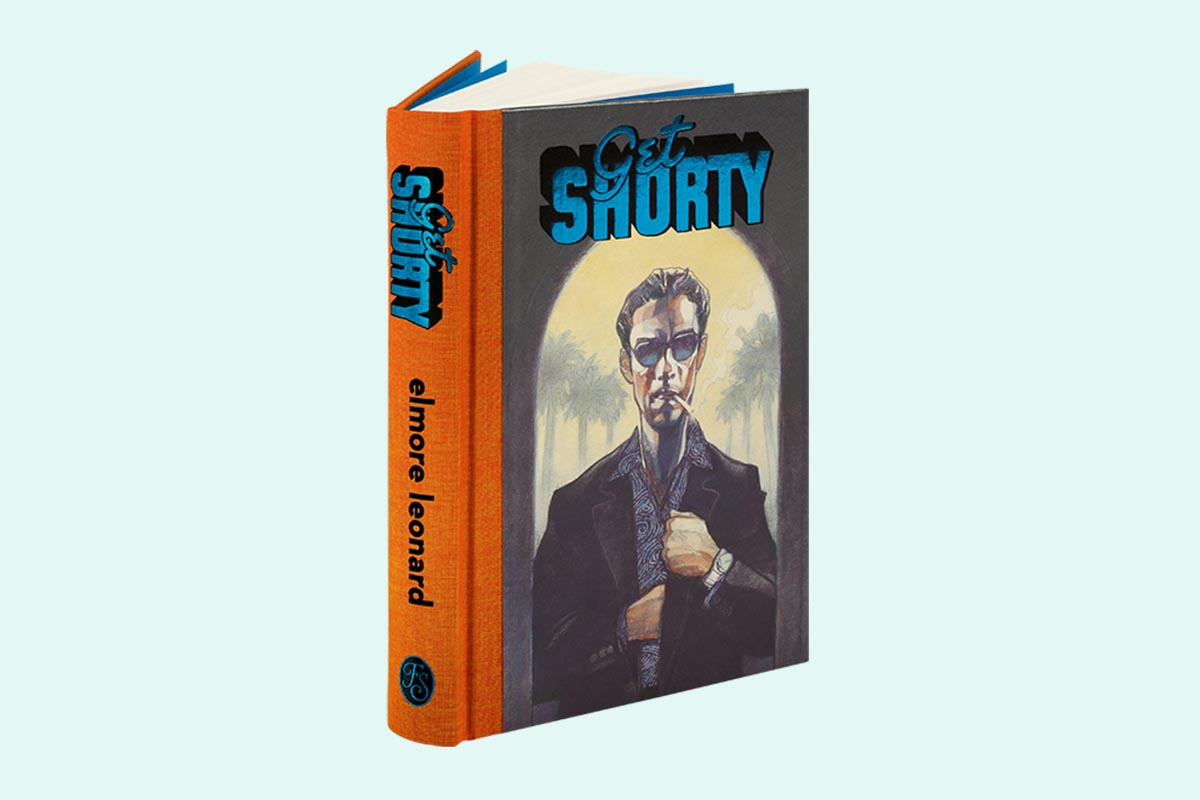 Leonard, who passed away in 2013 at the age of 87, was a prolific author with 27 novels under his belt before Shorty‘s release. The plot of his most famous book is admittedly a bit scattershot (Lehane: “Where other novels zig, Leonard’s zag…Elmore Leonard’s plots feel less like plots and more like life”), involving mobsters, a stolen leather jacket, faked deaths and narcissistic movie stars. But the idea of equating loan sharks and crime with movie producers certainly appealed to Hollywood, which always loves a story about itself.

And Get Shorty is an incredibly meta and self-aware novel. Lehane sums it up as thus: Loan shark “Chili” Palmer “ultimately end(s) up in Hollywood, pitching [producer] Harry Zimm the story of the dry cleaner, which is a story the author himself invented. So Chili is, in essence, pitching an Elmore Leonard story within an Elmore Leonard novel to an Elmore Leonard character.” And that character would ultimately be played by Gene Hackman in the film … which was an in-novel casting suggestion five years before the Barry Sonnenfeld adaptation came out.

The 1995 Get Shorty film with Hackman and John Travolta was a financial and critical success, opening the floodgates to other movie adaptations of Leonard’s crime works, including Quentin Tarantino’s 1997 Jackie Brown, Steven Soderbergh’s Out of Sight (1998) and 2005’s Get Shorty sequel Be Cool.

And as Leonard influenced Hollywood, the film industry returned the favor. “Quentin Tarantino’s rise has so much to do with Elmore Leonard’s world, as he would be the first to admit, that by the time a ‘real’ Leonard adaptation showed up in the form of Get Shorty, everyone had been prepared by Reservoir Dogs and Pulp Fiction for that tone,” as Soderbergh told Sight and Sound magazine.

A Perfect Storm of Factors Suggests That Americans Are Going to Vacation Like the French This Summer
The Life, Death and Rebirth of Maybach, Mercedes-Benz's Luxury Zombie Brand
Reddit Users Explain Why Jerry Seinfeld’s Apartment Building Literally Could Not Exist
Ken Burns on Stepping Into the World of Ernest Hemingway for His Latest PBS Doc
One Man Built a One-Sixth Scale Model of the Grateful Dead's "Wall of Sound"
The Real Problem With Male Birth Control

A Perfect Storm of Factors Suggests That Americans Are Going to Vacation Like the French This Summer
The Life, Death and Rebirth of Maybach, Mercedes-Benz's Luxury Zombie Brand
Reddit Users Explain Why Jerry Seinfeld’s Apartment Building Literally Could Not Exist
Ken Burns on Stepping Into the World of Ernest Hemingway for His Latest PBS Doc
One Man Built a One-Sixth Scale Model of the Grateful Dead's "Wall of Sound"