Patrick Mahomes walks off the field following the Chiefs 27-24 loss to the Cincinnati Bengals.
Getty Images
By Evan Bleier @itishowitis

Following an epic Divisional Round of the playoffs that saw all four games end in walk-off fashion (three field goals and an overtime touchdown) with an average margin of victory of just 3.8 points and both No. 1 seeds (Titans and Packers) getting wiped off the board, the AFC and NFC Championship games had a lot to live up to.

In a huge win for the NFL’s “any given Sunday” mantra, both games actually did.

For the second straight week, the Kansas City Chiefs found themselves in overtime and once again had the ball to start the extra period. Unlike last week, though, the Chiefs were not able to score to punch their ticket to the Super Bowl and lost 27-24 after a game-winning field goal off the foot of rookie kicker Evan McPherson. Also decided by three points at 20-17, the NFC Championship game wasn’t over until Jimmy Garoppolo was picked off late in the fourth quarter to send the 49ers home and the Rams back to the big game for the second time in four years. Instead of looking ahead to Super Bowl LVI, let’s examine why San Francisco and Kansas City lost their conference’s respective championship games.

The Chiefs Lost Because of Andy Reid and Patrick Mahomes

In addition to a creative offensive scheme featuring multiple looks and playmakers with diverse skillsets, one of the hallmarks of an NFL team coached by Andy Reid used to be subpar management of the clock and poor decision-making at the end of games.

When Reid finally broke through two seasons ago with the help of all-world quarterback Patrick Mahomes and won his first Super Bowl, it seemed like the 63-year-old had finally been able to rid himself of his clock management issues and clean up his team’s tendency to make sloppy plays in the clutch.

But old habits die hard, and the Chiefs mismanaged the clock at the end of both halves of their loss to the Bengals, and both Reid and Mahomes are to blame for Kansas City not advancing to the Super Bowl for the third straight season.

Clearly outplaying Cincy and holding a 21-10 lead, the Chiefs got the ball back with 1:05 left in the first half and were also due to receive the second-half kickoff, giving them the opportunity to add two scores to their lead before the Bengals would even touch the ball and effectively end the game. That didn’t happen, as Kansas City somehow came away with no points after a defensive penalty on the Bengals in the end zone set up the Chiefs with a first-and-goal on the 1-yard line with nine seconds remaining and no timeouts.

On first down, Mahomes drained four seconds off the clock before tossing the ball into the ground with five seconds left and all his targets covered. Needing a quick throw into the end zone on second down to preserve time for a field goal in case the pass didn’t result in a touchdown, Mahomes threw to Tyreek Hill at the 5-yard line. Facing a wall of Bengals defenders, Hill attempted to get into the end zone instead of getting out of bounds and was tackled inbounds to run out the clock and send the Chiefs to the locker room without more points.

In a game that came down to a field goal, that sequence was incredibly important — as was the way the Chiefs handled the end of the second half late in the fourth quarter while trailing by three after 21 unanswered points by the Bengals.

Despite being down three, the Chiefs were seemingly in control of the game facing first-and-goal at the 5-yard-line with 1:30 left and three timeouts. Needing a field goal but obviously capable of scoring a touchdown, Mahomes just needed to run some clock and avoid negative plays. Instead, he got cute running around on multiple plays looking for a big play, and eventually almost lost the game after Sam Hubbard forced a fumble that the Chiefs were fortunate to recover.

Mahomes and the Chiefs got bailed out by a game-tying field goal that sent the contest to overtime, but the lingering stink was too much Kansas City to overcome as a hero-ball throw to Hill on third-and-long was intercepted to set up McPherson’s game-winning kick.

“I gotta be better. I mean when you’re up 21-3 at one point in the game, you can’t lose it, and I put that on myself,” Mahomes said after the game. “We were playing so well in the first half, and the second half we were just off a tick and that’s all it takes to lose a football game. I mean, a few plays here and there, you could have four chances at the Super Bowl. So I mean it’s definitely disappointing, but we have to learn from it.”

After the Chiefs won the Super Bowl two seasons ago, it appeared Reid and Mahomes had learned from botching the clock in a loss in the AFC Championship game to the Patriots the year before. Now, following another AFC Championship game defeat, it’s crystal clear the lessons they learned were forgotten.

The 49ers Lost Because They Let Their Momentum Slip Away

Leading 17-7 with 1:59 left in the third quarter of Sunday’s NFC Championship game following a 16-yard touchdown pass from Garoppolo to George Kittle, the 49ers were in prime position to pull off an upset of the Rams and head back to the Super Bowl for the second time in three seasons.

Even after Los Angeles put together a seven-play, 75-yard scoring drive to cut San Francisco’s lead to 17-14 with 13:30 left in the contest, the Niners were still in control of the game, and NFL teams were a collective 26-1 when leading by 10 or more points in the fourth quarter of a playoff game over the last three seasons. That number is now 26-2, and Garoppolo and the 49ers own both the losses (Super Bowl LIV and Sunday’s 2021 NFC Championship).

When handing out blame, most people will likely point to Garoppolo, who completed 16-of-30 passes for 232 yards with two touchdowns and an interception, or San Francisco safety Jaquiski Tartt, who had a chance to change the game with an interception of Matthew Stafford with less than 10 minutes remaining on the clock but had the ball slip through his hands.

Moments later, aided by a senseless unnecessary roughness penalty following a deep catch by Odell Beckham Jr., the score was tied and all of the game’s momentum was with the Rams.

“For me, it’s tough, but it’s a moment a lot of athletes I know dream of,” Tartt said after the game. “You can make that game-changing play, and for me, that’s something I was thinking about all week. I know I can make that play, and when the play came up, I ain’t make it. I know that was a big play of the game, a big opportunity for me and for the team. As a player, I feel like I let my brothers down.”

Tartt may have let his teammates down, but they had the opportunity to pick him up — and they didn’t. Part of the reason for that may tie back to what happened directly prior to Tartt being unable to come up with the interception.

Leading 17-14 with 10:01 remaining in the fourth quarter, the 49ers were facing a fourth-and-2 from the Rams’ 45-yard line following the second unsuccessful challenge of the day from LA Rams coach Sean McVay. Though the 49ers had sent the punt team onto the field after third down, San Fran coach Kyle Shanahan kept his offense on the field when McVay’s challenge was denied and the Rams were docked their second timeout.

Needing just two yards to extend their drive and run valuable time off the clock as well as have an opportunity to put more points on the board, the 49ers came out to try and get the defense to jump offside with no intention of running a play. The Rams didn’t bite and the 49ers took a delay of game penalty and punted the ball back to LA. Nine plays later (including Tartt’s drop), a 40-yard Matt Gay field goal tied it up at 17 points apiece with 6:49 left. Per ESPN, the 49ers had a 60.1% win probability when they decided to take the penalty. By the time Gay knocked his field goal through the uprights, the Rams owned a 63.3% win probability.

“We were never thinking about going for that,” Shanahan said after the loss. “We just didn’t want to. We were up three points and didn’t think it was the right decision. We were just trying to draw them off, we knew we were gonna punt. We weren’t gonna go for it there at mid-field on fourth-and-2. And then the play right after that, we missed the chance to get the pick.”

Blame Shanahan. Blame Garoppolo. Blame Tartt. But most of all, blame the 49ers as a whole for collectively letting the momentum they built with road wins in Dallas and Green Bay and a strong performance in the first three quarters against the Rams in LA slip away. The NFC title was there for the taking, but the 49ers couldn’t hold on. 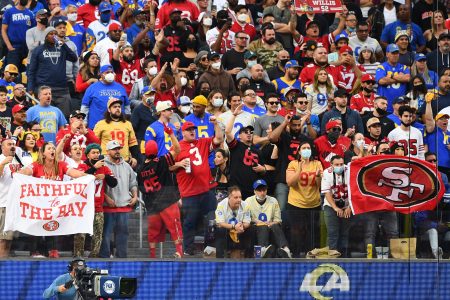 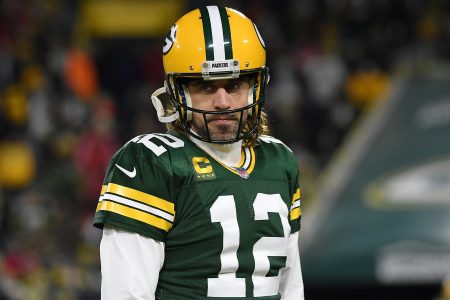 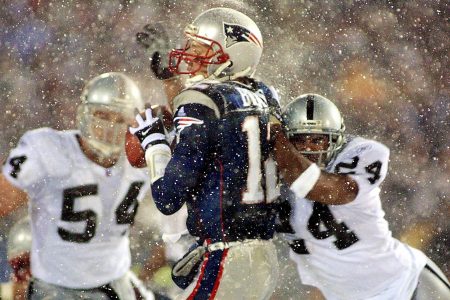