The Recovery Secrets of Christian McCaffrey, the NFL’s Best Running Back

The 23-year-old Carolina Panther talks naps, nutrition and what he learned from his dad 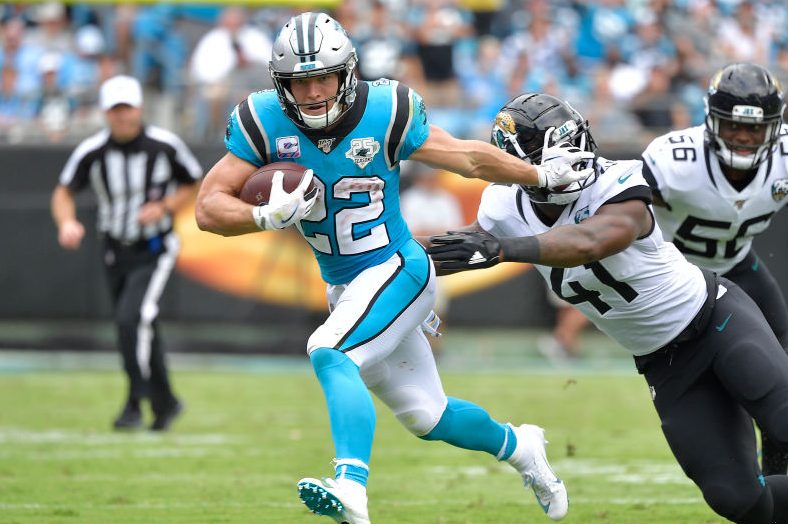 On the strength of 2,097 rushing yards and 13 touchdowns, Adrian Peterson beat out Peyton Manning for league MVP in 2012, the 18th time a running back had won the award. There has not been a 19th, as quarterbacks have won every year since, with only three runners garnering a vote.

That may change this year thanks to the force that is Christian McCaffrey.

Leading the league in rushing attempts (127), rushing yards (618) and second in total touchdowns (9) through six weeks, the Carolina Panthers’ star running back is morphing into a superstar in front of our eyes.

McCaffrey, who has also caught 35 passes for 305 yards, had 866 scrimmage yards through five games, which had him on pace for 2,771, a mark that would break Chris Johnson’s NFL record by more than 250 yards.

Were it not for his versatility, McCaffrey — who is also a brand ambassador for Flag & Anthem and rocks their threads when he isn’t rocking his Carolina uniform —  wouldn’t have a shot at breaking Johnson’s record, but he’s made himself into the biggest dual-threat in the NFL, and opposing defenses have yet to figure out how to stop him.

“It’s incredibly important to be versatile,” McCaffrey tells InsideHook. “From an offensive perspective, your game plan can change week to week based upon your opponent.  As a running back, I need to be able to do multiple things in order to give us the best chance to win.”

One of those things is catching the football, something McCaffrey excels at.

“It is certainly something I have worked on throughout my career and continue doing so today,” he says. “Again, it’s part of wanting to be able to help the team as much as possible so being able to be used in multiple ways is my goal.”

The 23-year-old probably got some pass-catching tips from his dad, three-time Super Bowl-winning wide receiver Ed McCaffrey, but apparently that’s not the best advice he got.

“One of the biggest things he stressed was recovery,” the younger McCaffrey says. “The NFL season is long, and you always want to be available to your team so taking the necessary steps in the training room is something he stressed to me early on.”

McCaffrey also takes steps outside of the training room as his weekly routine includes sleeping almost 10 hours a night, a daily nap, a strict diet prepared by a personal chef and a mid-week recovery day that incorporates options like a pool workout, sauna time, a contrast bath and cryotherapy.

One thing his in-season routine doesn’t include? Cheat days.

“During the season I really don’t have a cheat day,” McCaffrey says. “Maybe during the bye week, I will indulge in something that I wouldn’t normally eat during a regular week. Nutrition is such a vital component to feeling well and performing so I am always conscious of how I will be affected by what I put into my body.”

Luckily for McCaffrey, the Panther go on their bye this week after playing over the weekend in London against the Tampa Bay Buccaneers.

In addition to possibly indulging in a bag of Doritos or some sushi, McCaffrey may find time to play the drum kit he purchased after seeing Miles Teller in Whiplash.

“I am very passionate about music and it is certainly a big part of my life,” he says. “I just appreciate the work that it takes to become really good at something, and music is one of those things that can be so detail-oriented in terms of training but also allows for the most creativity.”

If you’ve seen Run CMC discover holes in the line that don’t exist and then burst through them with the precision of a surgeon, you know that playing running back the way he does requires the exact same blend of training and creativity.