Nearly 50 years later, a ‘Fear and Loathing’ footnote lives on

“In some circles, the ‘Mint 400’ is a far, far better thing than the Super Bowl, the Kentucky Derby and the Lower Oakland Roller Derby Finals all rolled into one,” Hunter S. Thompson wrote in Fear and Loathing in Las Vegas. “This race attracts a very special breed.”

Nearly a half-century later, it still attracts a very special breed … of maniacs.

It all began in 1967, when Leroy Whickham, now 76, decided to take a casual desert drive from Vegas to Reno and back. You know, for fun. That trek in turn inspired Norm Johnson to found a weekend-long, 400-mile derby of horsepower, sandstorms and at-large skullduggery that would come to be known as America’s Great Off-Road Race.

The race was originally a PR stunt: the Mint Hotel had hired Johnson to direct a two-car duel to promote their annual deer hunt. In 1968, the race held its maiden voyage under spartan conditions: they used a punch-in/punch-out time clock they’d bought at auction to record the official start and finish times. The following year, Johnson enlisted race greats Mel Larson and Parnelli Jones to heighten to event’s visibility. And it did — though not at the expense of its indecorum.

“We used to have motorcycles, but the insurance just got to be too much,” said Johnson. “I remember that second year when one rider went down. We didn’t have the tech that we do now and we didn’t find out until some other driver came around to let us know he had flown over a guy knocked out. By the time we got over there the rider was conscious. I remember I asked him, ‘What’s the first thing you thought when you came to?’ ‘The first thing?’ he said. ‘I thought ‘MOVE!’”

The race was then tucked away on roads that don’t merit a name. The kind of place where you find discarded furniture and you’re certain somewhere between one and 100 people have gone missing right where you stand.

Of the 115 cars and bikes signed up for the Mojave ass-kicking’s second edition, few crossed the finish line. It seemed the Mint was doomed. Then the president of the Mint’s sister casino, the Sahara, crossed the finish line. “This is the best goddamn thing I’ve ever seen!” he exclaimed. The founders were sold. Mangled though the vehicles — and drivers — were, the race would live on.

In ‘72, to add a little glitz and glamour to the proceedings, Mint Hotel head honcho K.J. Howe conceived “The Girls of the Mint 400.” Because Vegas. Now, somewhere between the sand-worn hoonigans and ever-growing purse stood the statuesque likes of Wheels of Fortune’s Vanna White, Playboy bunnies Tracy Vaccaro, Dona Speir and Vickie Reigle, and a little someone named Lynda Carter, aka Wonder Woman. The now-coined Miss Mint competition continues to this day, and it looks about exactly as you’d imagine.

In 1988, the Mint Hotel was sold and the race took a hiatus. Until 2008, at least, when the beast was revived bigger and badder than ever.

Remember: off-road racing isn’t for ninnies, dandies or bluebloods. Sure, Indy 500 winners Parnelli Jones, Al Unser and Rodger Ward have raced alongside stars like James Garner and McQueen, but this isn’t for the NASCAR set. It’s about camaraderie, adventure, brotherhood — well, up until the starting line, anyway.

The Wild West facade might suggest this is a bootstrap affair. But a trip to 2013 Mint champ Bryce Menzies’s (you might know him as the record-shattering fella who jumped an entire Ghost Town) epic compound proves otherwise: the warehouse is filled to the brim with two semis, trophy trucks and off-roaders whose pricetags bleed well into the millions.

There’s a reason you need all that surplus. I watched legendary second-generation racer Cameron Steele throw his tranny two days before the race in time trials. When he came off the track he just said, “Well, that’s why we have two of everything.” His crew, who had arrived at 4 a.m. the night before, got straight to work.

The desert is unforgiving. It will eat you. Which is why there are regulations — these days. The 2017 edition of the race comprised 24 classes each with their own limits for elements like suspension and engine displacement and each with its own start times. One (virtual) proviso: BFGoodrich tires, which accounted for about 60 percent of the rubber in the race. “The tires are good,” said MacCachren. “Too good. It almost feels like cheating.”

But all the money in the world can’t buy skill, and it can’t buy heart.

Bob Bower, the veritable Yoda of off-road racing, told me as much the day before the race: “You see guys with big open checkbooks get in the game. And that first year, they have the best of it all. But they quickly learn that everyone gets a report card. And that they’ll get theirs. The next year, you won’t see them back. Some people want to know if money or skill will take the cake … I can tell ya, it’ll be skill everytime.”

Five hours, thirty-seven minutes and thirty-five seconds later, kid-faced 51-year-old MacCachren crossed the finish line. A Vegas native, Baja 1000 winner and off-road Hall of Famer, the Mint had bested him for years. But not this time.

“The Mint 400 draws the best Trick Truck drivers on the planet, and today we were the best one of those,” he told me. “Three of the last five years we were leading on the last lap before having a mechanical (problem). It really feels good to get that monkey off my back.”

So, sure, the Mint has its differences now, compared to that first two-horse running in ‘68. Robin Leach was the Grand Marshall and Jay Leno gave ‘em the ol’ razzle dazzle to start off the race. But the subtext of “Don’t die” is “Have f*cking fun,” and that ethos has been there since the days of Leroy Whickham and Norm Johnson.

Even as we left the track and the sun was long gone, the vintage class was still racing. It didn’t fly by, for them. But they’re not trailer rides — they still race — and it’s easy to appreciate that.

“I remember back in the ‘70s we were all getting ready for the awards ceremony. We were all showered and back in Vegas,” said Johnson. “And here two guys with an inch of dirt in their teeth bust through the door and exclaim, ‘We finished!’ Dear lord, it took ‘em a day and a half, but they did it … We cheered ‘em the same as the guys who came in first. It’s just that kind of race.” 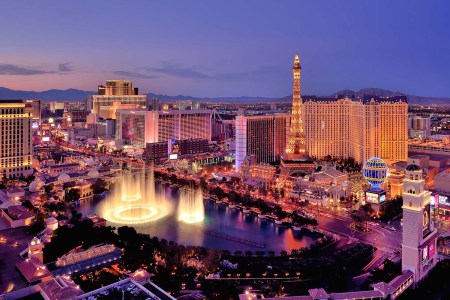