Edelman has never even made a Pro Bowl, but his postseason stats are worthy of Canton.

In his first game at wide receiver in September of 2009, 23-year-old New England Patriot Julian Edelman had eight receptions on 16 targets and ended up with 98 receiving yards in a 16-9 loss to the New York Jets.

The primary reason for Edelman’s receiving numbers falling off a cliff during his second and third seasons in the NFL is, well, he wasn’t really playing wide receiver.

Drafted as a quarterback out of Kent State, Edelman primarily played on special teams and mixed in at defensive back during his second and third season in the NFL. 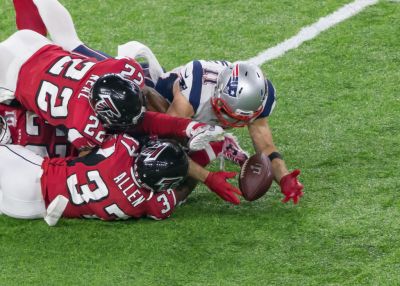 In fact, though few people remember it given how prolific he was at catching passes in Super Bowls XLIX (Seahawks), LI (Falcons), and LIII (Rams), Edelman was actually tasked with preventing completions by Eli Manning in Super Bowl XLVI against the Giants.

Edelman’s time on the other side of the ball is a big reason why he ranks just 148th all-time in receptions, 248th in receiving yardage, and is not even in the top 250 for touchdown catches … in the regular season.

Some decent names, sure, but nary a star-caliber player among them.

That may not matter for his legacy though because, as previously alluded to, Edelman, 32, has been a star in the playoffs – possibly big enough of one to earn him some consideration for induction into the Pro Football Hall of Fame. 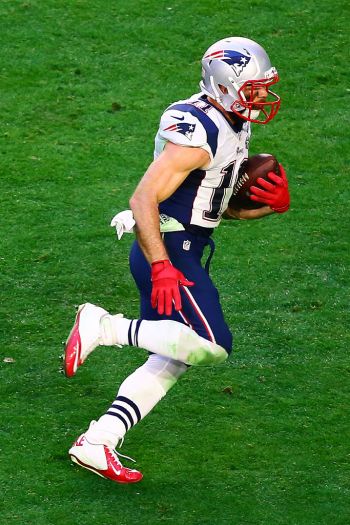 While he’ll never sniff Rice and his 22 postseason TDs, Edelman does have a shot at catching Rice – who appeared in 29 playoff games as opposed to Edelman’s 18 – in receptions and yardage if the Patriots continue to play playoff games.

And, if he does, he’ll certainly have to garner some Canton consideration based almost exclusively on what he’s been able to do in the playoffs.

Consider this, in nine postseason games – half of Edelman’s – guaranteed Hall of Fame wideout Larry Fitzgerald has 57 receptions for 942 yards, and 10 TDs. Touchdowns aside, Fitzgerald’s numbers compare pretty favorably to Edelman’s.

There’s no arguing that he doesn’t have the regular-season stats to warrant a bust and a gold jacket, but Edelman’s penchant for doing what needs to be done when it matters most could be enough – as long as he’s able to keep doing it.

For what it’s worth, former quarterback Boomer Esiason thinks Edelman is already there. 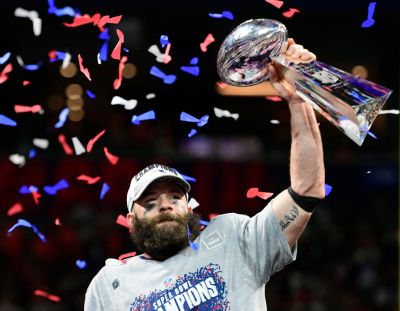 “Doing your job in the biggest moment and doing it seamlessly and doing it with what seems like a lot of effort because of how good he is and what he’s become, to me it shows a Hall of Fame performance,” Esiason told the “Mut & Callahan Show” on Tuesday morning. “I’m sorry. I’ve played the game. I’ve been on the field. I know what it takes to be what he is in the big spot. In my eyes, he’s grown over the last four or five years and his postseason effort speaks to that. The Super Bowl wins. The performance in the biggest games. I don’t want to disparage anybody in the Hall of Fame. If you’re in, you belong in and you’ve got the yellow jacket. All I did was bring up a fact that this guy continues to play at a very high level in the biggest games. I hope someday he’s recognized for that in the halls of Canton and if I had a vote I would certainly vote for him.”

Rice, while speaking to The Athletic, also said he would support Edelman’s Canton candidacy.

“He’s coming after me,” Rice said. “If that should happen, I would be the first one to congratulate him because of what he does on the football field. I think he’s making his own mark. He’s made a name for himself. Yeah, he doesn’t have the regular-season numbers and stuff like that, but it’s what this guy is doing during the playoffs. You have to start considering these guys. I know it’s not going to be my decision. It’s up to the Hall to make that decision, but I think you have to start looking at these guys from the slot position.”

Still, despite what Rice and Esiason think, there are plenty of other people who disagree with Edelman being a Hall of Famer.

Regardless, the fact that a former college QB who played defensive back in his first Super Bowl making the Hall of Fame as a wide receiver is even a topic of debate is a testament to Edelman and what he has accomplished.

While that – and his three Super Bowl rings (and counting) – is probably enough for the reigning SB MVP, it may not be enough to get him into Canton, at least not yet.

(By the way, Edelman has a 135.4 passer rating in the playoffs after completing one of two passes for 51 yards and a touchdown. Can’t hurt)