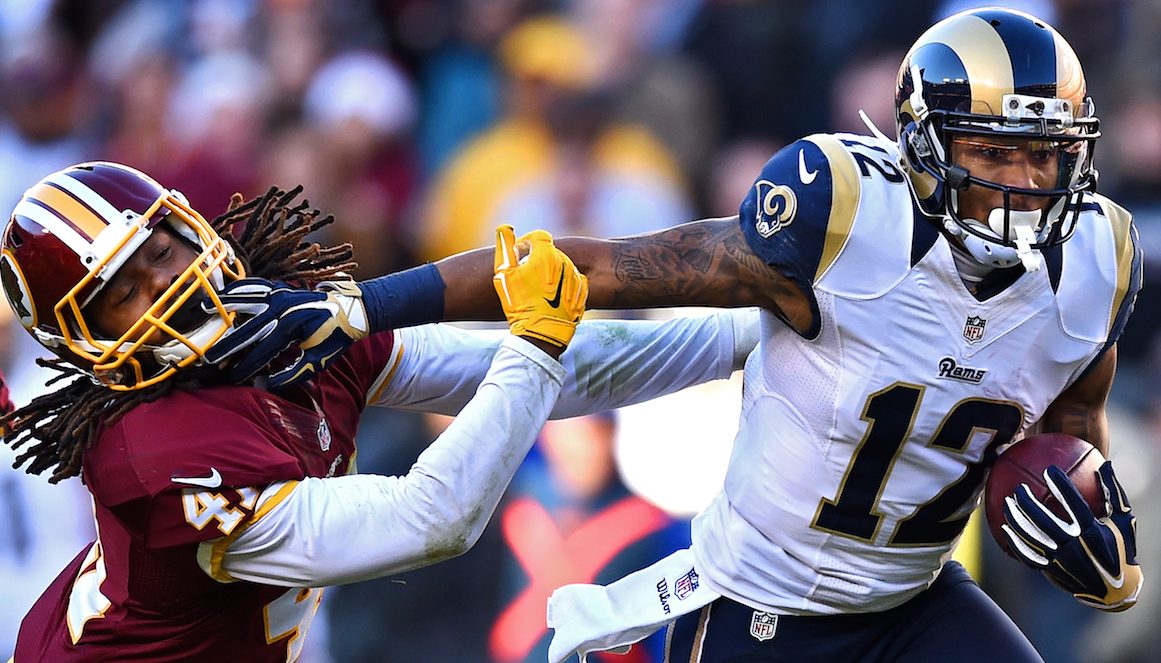 LANDOVER, MD - DECEMBER 07: Strong safety Phillip Thomas #41 of the Washington Redskins is stiff armed by wide receiver Stedman Bailey #12 of the St. Louis Rams in the third quarter of a game at FedExField on December 7, 2014 in Landover, Maryland. (Photo by Patrick Smith/Getty Images)
By Sean Cunningham / December 9, 2016 5:00 am 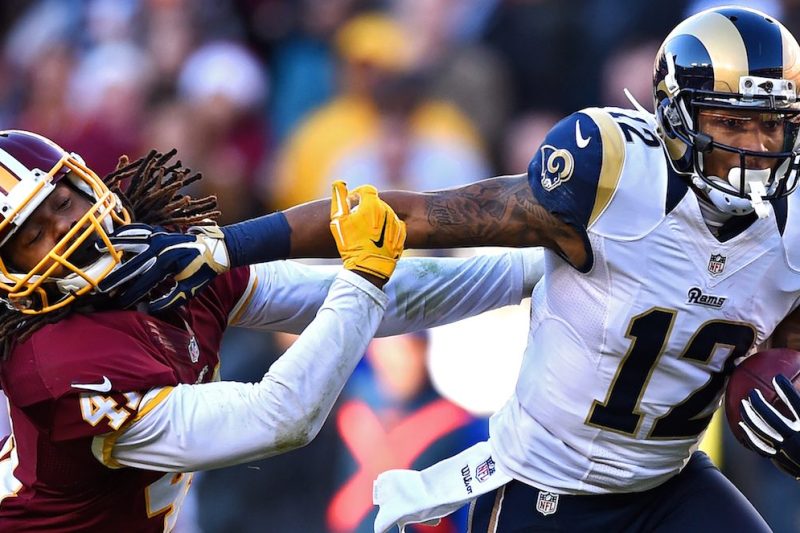 1.6% of NCAA football players reach the NFL. That means wide receiver Stedman Bailey had beaten the massive odds just to make the roster of a pro team for three seasons. Season number four, however, is going to be a truly incredible feat. Indeed, just being alive is unlikely for Bailey, because he was shot twice in the head.

In the midst of a suspension for substance abuse, Bailey was already in a dark place on November 24, 2015. Beyond this, his career had yet to ignite with the St. Louis Rams (except for this touchdown-scoring trick punt return). A third-round pick, he had scored a total of three touchdowns in the NFL. Back home in Miami, Bailey was planning to drive to his mother’s for Thanksgiving the next morning. He didn’t get the chance. Timothy Bella writes for The Ringer:

“At a quarter till 9 p.m. on that November 24, gunshots disturbed the relative tranquility. It wasn’t until the first bullet hit Reeves in the back that he knew there were shots directed at their car. A barrage of bullets pierced the SUV, sparking horror and confusion. Reeves tried pushing his cousin’s head down, while also jumping on top of both of his children to shield them. Bailey, in disbelief, looked over his shoulder to see his family in the middle of the crossfire.”

At least 30 shots were fired, hitting Bailey’s cousin, Antwan Reeves, 11 times. Bailey initially thought he wasn’t injured, until Reeves pointed out there was a hole in his head. Both men would, somewhat miraculously, survive, with Bailey overcoming a bullet that “entered behind his right ear and exited above his right eye.”

While alive, Bailey soon encountered more difficulties. The Rams waived him. He didn’t get the closure of justice either, as no official arrests have been made. Months later he heard rumors that three men responsible had been picked up, but there is no confirmation. As for the motive, Bailey believes they were just in the wrong place at the wrong time and walked into an ambush intended for someone else.

Now he’s attempting to return to football. It’s unlikely: Bailey was hardly a star even before the attack. Beyond this, it’s potentially dangerous: Some doctors worry the wound to the head is the equivalent of a particularly severe concussion. Yet Bailey is still attempting to regain his playing career and the existence he had before the shooting: “I’m just trying to live.”

To read the full story of Stedman Bailey, click here.