The NFL Is Trying to Steal Christmas Day From the NBA, And We Do Not Approve

Does anyone really want to spend December 25th watching the Broncos and Rams?

If we could identify some broadstroke Christmas traditions — the sort of rituals that Americans around the country can count on when the world idles at the end of December — in a Family Feud style poll, the headliners would be pretty obvious. You and I probably both open presents left under a Douglas fir, or retrieve some trinkets from a stocking, or crack open the final punchbox in an advent calendar. You likely have a large dinner scheduled in the evening, with the particular foodstuffs dependent on your own personal proclivities and biases. (We’ve never been a turkey family, but we’ve done plenty of lasagnas over the years.) And, perhaps most importantly, there is a good chance that as the fanfare dies down and Christmas morphs into that strange holiday void, you’ll sit on the couch and watch a full slate of NBA games. 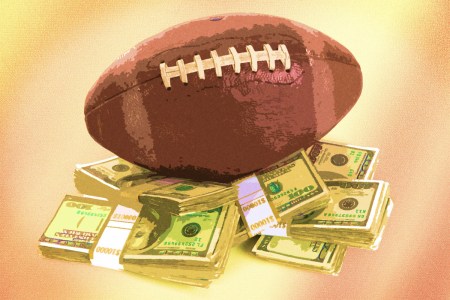 Have sports themselves become ancillary to our newfound ability to legally bet on them? Watch any pro sports broadcast and the answer is clear.

The NBA has earmarked Christmas as its territory since the dawn of the league. In 1947, which served as the second full season of what was then a pro basketball startup, the New York Knicks faced off against the Providence Steamrollers at Madison Square Garden. (The Knicks prevailed, 87-75.) Since then, Christmas has become a showcase of the most intriguing players and storylines that dominate the current texture of the roundball landscape. 2022 is no different. The Golden State Warriors and Memphis Grizzlies are reigniting the contentious, highly-entertaining rivalry the two sparked in last year’s playoffs. The 76ers and Knicks are meeting in MSG, which adds a certain old-world, east-coast splendor to the proceedings. But personally, I’m most excited for the Celtics vs. Bucks matchup — which was great television in the spring — and will allow us to catch a glimpse of what these squads look like when both of them are operating at full roster capacity. (Welcome back Khris Middleton and Robert Williams!)

Unfortunately, in its relentless effort to swallow up every facet of American culture, this year’s NBA Christmas will also be interrupted by three terrible football games — which, for my money, is basically taboo. The NFL never used to tread into the sacred ground of December 25. They had Thanksgiving, and after a century’s worth of awful Packers/Lions blowouts, that was more than enough. But starting in 2021, pushed along by the relentless growth demands of capital, the Roger Gooddell braintrust has started scheduling NFL counter-programming to disrupt our wondrous basketball zen.

This year’s slate is absolutely brutal. The Broncos and Rams are playing — two abysmal teams that are not making the playoffs and don’t have their starting quarterback — in what will be perhaps the worst football game to air on television all year. (Seriously, I’d rather watch a random Division III matchup than the Baker Mayfield/Brett Rypien showdown.) The Packers are in the midst of their worst season in four years, and they’re marching into Miami for a slaughtering that might serve as the grim capstone on the Aaron Rodgers era in Green Bay. The Buccaneers and Cardinals are also playing, which is bound to capture Tom Brady at the depressing nadir of his storied career. All of these games are likely going to lap the NBA in ratings — because we live in a world where even the grizzliest NFL programming dominates the domestic conversation, which is profoundly depressing to consider. After all, there is a reason Amazon paid $100 billion for the rights to broadcast Thursday Night games. (We’ve got Jaguars/Jets this week. Money well spent!)

So I cannot gripe with the raw business fundamentals of the NFL grabbing some of the Christmas real estate for themselves. I’m sure the encroachment might raise the overall valuation of the league by a thousandth of a percent, which is all the ownership class cares about. What I can say, with prejudice, is that I am completely exhausted by the NFL’s attempt to worm its way into every facet of American life. It’s gotten way out of hand. The NFL has successfully made the off-season release of its schedule a sports-radio talking point. In the middle of May, when the NBA and NHL playoffs are rolling and pro baseball is getting into its groove, you’ll hear guys like Colin Cowherd and Skip Bayless breaking down a Cowboys/Eagles Sunday Night game — which happens every season, mind you — six months ahead of time. The NFL has also successfully transformed its Draft Combine into a legitimate pop-culture event; as if anyone outside of scouts and the most inveterate tape-eating sickos should ever care how fast a defensive tackle’s 40-yard-dash time might be. The league has yet to pilfer New Year’s Day from the NCAA, but I’m sure that’s next on their list of targets.

It can’t go on like this, man. If the NFL is left to its own devices, it’s going to eventually totally subsume the calendar. We’ll have year-round football; every holiday will be interrupted by some turgid showdown of mediocrity, carving into the terrain owned, autonomously, by other sports institutions. Imagine CBS cutting away from the Masters because they’re on the hook to broadcast Giants/Commanders. Imagine next year’s Women’s World Cup curtailed by some bullshit like Dolphins/Patriots. If the Biden administration wants more people on its side, he will immediately issue an executive order mandating all sports leagues to stay in their lane. Football is on during Thanksgiving, basketball is on during Christmas, and baseball is on during the summer. This might be the only truly conservative viewpoint I have.

Either that, or at least let us flex out the bad Christmas football games. It is a season of giving, and I don’t want to spend it watching whoever is playing quarterback for the Arizona Cardinals.