The Knicks Won’t Win to No Fault But Their Own

GREENSBURGH, NY - JULY 08: Courtney Lee, Joakim Noah, and Brandon Jennings and President Phil Jackson of the New York Knicks attend a press conference at the Madison Square Garden Training Facility on July 8, 2016 in Greenburgh, New York. NOTE TO USER: User expressly acknowledges and agrees that, by downloading and or using this photograph, User is consenting to the terms and conditions of the Getty Images License Agreement. Mandatory Copyright Notice: Copyright 2016 NBAE (Photo by Nathaniel S. Butler/NBAE via Getty Images)
By Matthew Reitman 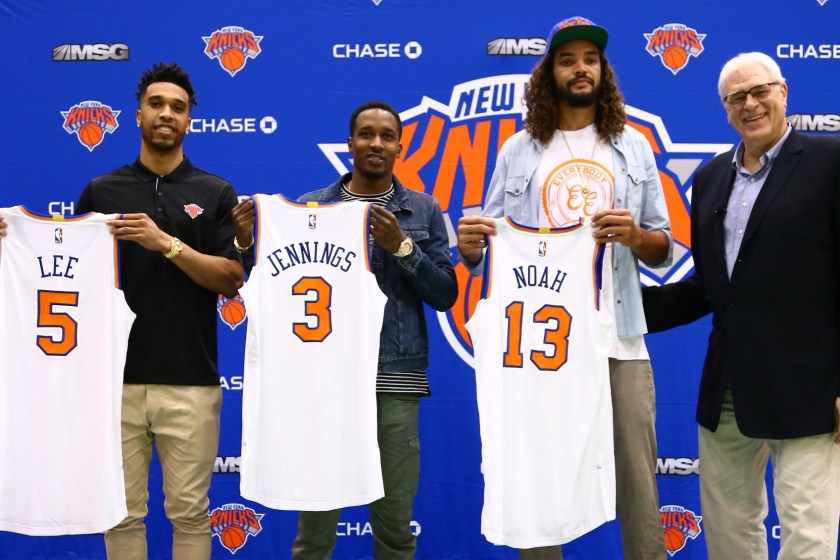 In the last 70 years, the New York Knicks have only won two championships (1970, ’73). In the world of professional sports and particularly on as big of a stage as New York, that’s disappointing from both a fan and franchise standpoint. Part of this is due to the revolving door of head coaches that struggle to control a team that’s never really quite theirs. The larger issue for the Knicks is the desire to have big stars on its big stage. Sometimes this predilection leads to discovering unexpected gems, like All-Rookie Kristaps Porzingis.

More often, though, it leads to landing stars who are past their prime and struggling to come around to that notion – Amar’e Stoudemire and Stephon Marbury are recent examples of this and there’s a good chance that Derrick Rose and Joakim Noah will be as well. The frustration for fans is compounded by the fact that the Knicks tend to use up their cap space on these fading players, leaving them unable to sign rising stars, much less ones in their prime.

So what’s a better option for the Knicks than signing Rose and Noah to bloated, prolonged contracts? The Ringer‘s Jason Concepcion has your answers here. For some context on the historical struggle of  New York’s basketball team, watch Bill Simmons break it down below.