How the Jugs Machine Changed the NFL 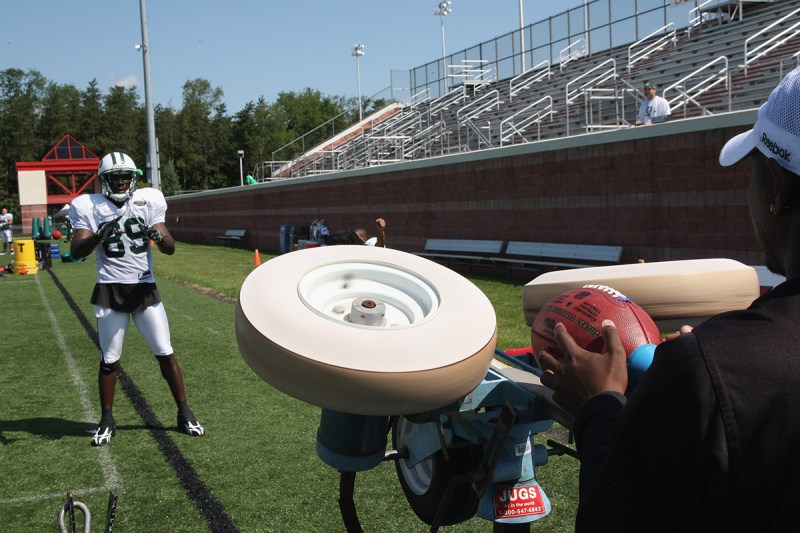 When you watch an NFL game these days, you see wide receivers making remarkable catches on an almost routine basis. They reach back to snare passes behind them. They dive to scoop up balls before they hit the turf. They jump high to secure them over the heads of defensive backs. Sometimes they even grab them with one hand. (See: Odell Beckham Jr.)

And one device has played an instrumental role in helping them make all these highlight reel–worthy catches: the Jugs machine.

First used for football in the mid-1970s, the Jugs machine is now a fixture at every NFL team’s practice facility. (It’s also made its way to most college teams’ training grounds, and even into some high school teams’ equipment rooms.)

As Greg Garber writes in an article for ESPN.com, the Jugs machine isn’t overly complicated. A pair of rubber wheels, driven by a one-quarter horsepower motor, are angled so that when a football is fed between them, the ball is launched with a perfect spiral. With a quick adjustment or two, you can change the direction and the speed.

Wide receivers have come to rely on the Jugs machine to develop their pass-catching skills to an expert level. In fact, most NFL receivers swear by the device, which is produced in Tualatin, Oregon, at the Jugs Sports factory. Broncos receiver Emmanuel Sanders estimates he has caught “thousands and thousands” of balls from the machine. “It’s definitely been pivotal for my success,” he tells Garber.

The machine has probably been pivotal to the meteoric rise in passing in the NFL, too. In the 1970s, there were 53,003 total receptions in the league. From 2000 to 2009, there were nearly double that amount: 99,287. It’s impossible to say how much of that increase is due to the Jugs machine, but one thing is certain: It definitely played its part.

Unlike a human, the Jugs machine never tires out. Its arm never gets sore. It never has to pick up its children. So it can shoot footballs to players (even defensive players) over and over again, at any hour, day or night.

The cost? A reasonable $2,600 (plus shipping). Which is why some NFL receivers even have their own personal Jugs machines set up in their backyards.

Watch the ESPN video below.

To read more about the Jugs machine and its impact on the NFL, go here.

It Seems the Star Defectors of LIV Golf Series Are No Longer Good at Their Craft
Meet the Canadian Distillery Behind the World’s Best Rye
The Chevrolet Corvette C4 Is a Classic Sports Car Steal
The Ideal Bonita Springs Getaway Is More Than Alligators, Tacos and Piña Coladas
The Best Places to Order Steak Online
Defectors to LIV Golf Invitational Series Have Started Teeing Off on PGA Tour