Jack Nicklaus Reflects on a Lifetime Spent on the Golf Course

"As you get older, you realize what a humbling game it is," The Golden Bear says 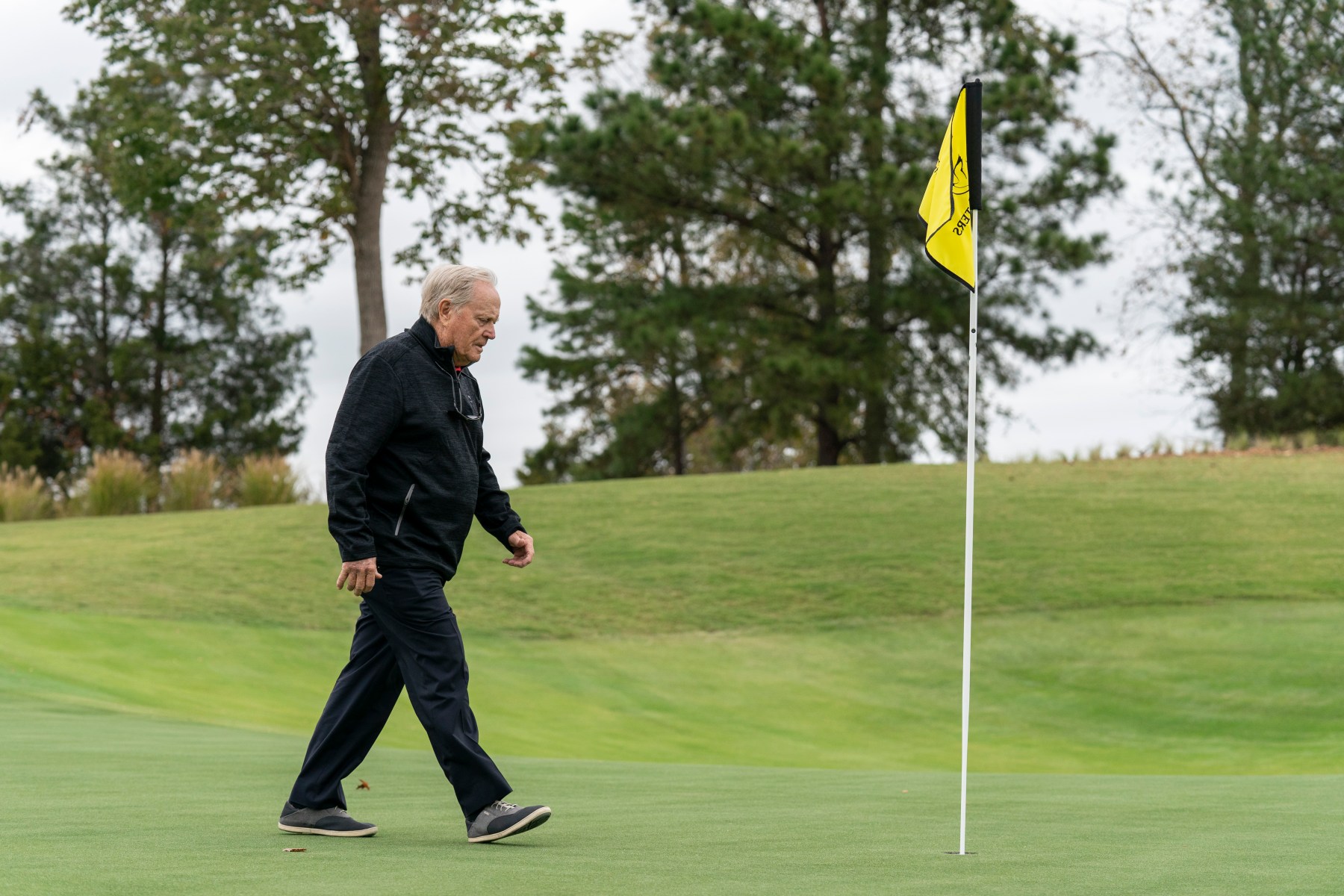 As Jack Nicklaus approaches his 80th birthday this coming January, you can’t help but feel he’s talking about more than putting greens and sand bunkers when discussing the game of golf. A game already rich in dramatic metaphor and moral takeaways gives the grand champion a chance to share his wisdom on how life sweetens with age.

Nicklaus stands at a podium set up on the 18th tee at Great Waters within the 15,000-acre resort community of Reynolds Lake Oconee, Georgia. One of six courses making up the Reynolds property alongside Taylormade’s Kingdom of Golf, Great Waters will reopen the next day after a major renovation. The changes offered Nicklaus a shot at redesigning and updating some elements of the championship course originally laid out nearly three decades ago, when he was still playing the game at the elite tournament level.

“I found there was a lot I would do differently today, compared to the work I did 27 years ago. I see the way the game is played as you get older — and I’ve never seen a player anywhere who got younger. So, I spend my life now putting in forward tees.”

The remark might seem like an innocuous detail on the layout of a golf course, but there’s a certain poetry to it. The man who forged the original Great Waters didn’t put in those easier, closer tees to cut down the unfriendly length of the track. He was a fierce competitor — a player who publicly stated he considered fewer than 10 men on Earth capable of challenging him at major tournaments in his prime. The rest would crack under the pressure of The Golden Bear stalking them. That Jack wanted to challenge players and make them earn their pars and bogies on every single hole. The high handicapper needed not apply.

Now, the World Golf Hall of Famer welcomes everyone into the game he loves.

“You have to realize that life moves on, and you have to reinvent the wheel a little bit. You have older players. You have young people you want to bring along into the game. So, you look to achieve a balance. That’s what I like to do. I like to make my designs playable for everybody, but balance it so good players can enjoy them, too.”

Nicklaus points to the back nine at Great Waters as an example of this older, cuddlier Bear’s work. His first design placed eight of the final holes on water. Any player without the ability to stop the ball or correctly gauge distance would be feeding a Titleist to the bass and blue gills. The new design keeps the placid lake waters in sight, but less in play.

“I didn’t want to make every shot penal on the water,” he explains. “When I originally designed it, I probably could’ve taken a little more off the water. I noticed that fact now I’m a little older and softer about things. I want to create more ‘wow’ holes now — give players a ‘wow’ when they look out from the tee box. It’s nice to see that — see the reaction you get with those ‘wows’ from the tee.”

It’s fair to suggest that any such “wows” the Nicklaus of decades past laid out would carry the tone of dread more than awe. A hyper focused, almost predatory nature carried him to the crown of “Greatest of All Time.” He wears it now with understated acceptance, though he has a rival for the throne in Tiger Woods, who needs three more Majors to match Jack’s record total of 18. Woods has won nine more total PGA tournaments so far, with 83, but he won them in the world of big-money golf that Nicklaus built. No Jack equals no Woods.

It’s clear Nicklaus doesn’t play the game much these days. An eight-decades-old body doesn’t lend itself to frequent rounds, but the impression lingers that a man who played the game at the highest possible level doesn’t have a burning desire to prove anything on the links anymore. He has more important challenges on his mind, with five kids and a small army of grandchildren waiting back home.

“I haven’t played tournament golf since I retired at the British Open in 2005. I really haven’t played 18 holes of golf in the last 14 years. As you get older, you realize what a humbling game it is. You realize people of all walks of life and all skill levels enjoy playing the game. I want to contribute to that.”

“The game of golf has been my life. I’ve enjoyed playing it. I’ve enjoyed designing courses. Now, I find golf is a great vehicle to charity. I’ve been a pretty lucky guy my whole life, and I have time now to try and help some people who weren’t quite as fortunate as I was.”

With his wife Barbara as a driving force, Jack set up the Nicklaus Children’s Healthcare Foundation off of the success of his golf career. Years ago, a children’s hospital saved their daughter’s life when she was less than a year old. When the time came to get involved with charities, a grateful father and mother started a foundation to improve children’s healthcare around the country.

“For the last 15 years, I’ve had as much fun with our charity as I’ve ever had in my life,” he tells InsideHook. “These kids that we’re helping — and all of the people that we’re helping as we go out raising money — might never have the opportunity for quality care otherwise. It was an eye opener for me.”

“There’s a line I like to use — and I use it a lot because it’s true: ‘There are a lot more important things in life than a four-foot putt.’”

Of course, Nicklaus made those four-footers when needed en route to his 117 total tournament wins between amateur, PGA and Senior Tour competition. But, what if he hadn’t? Where would he be today without the trophies and the Nicklaus Design business?

The champ has an answer for that, too.

“I’d probably be working at some golf club in Ohio shagging balls on a driving range. And, that’d be OK. Somebody’s got to pick up the balls, too.”