Now at 3-3, are the LA Rams still a playoff contender? 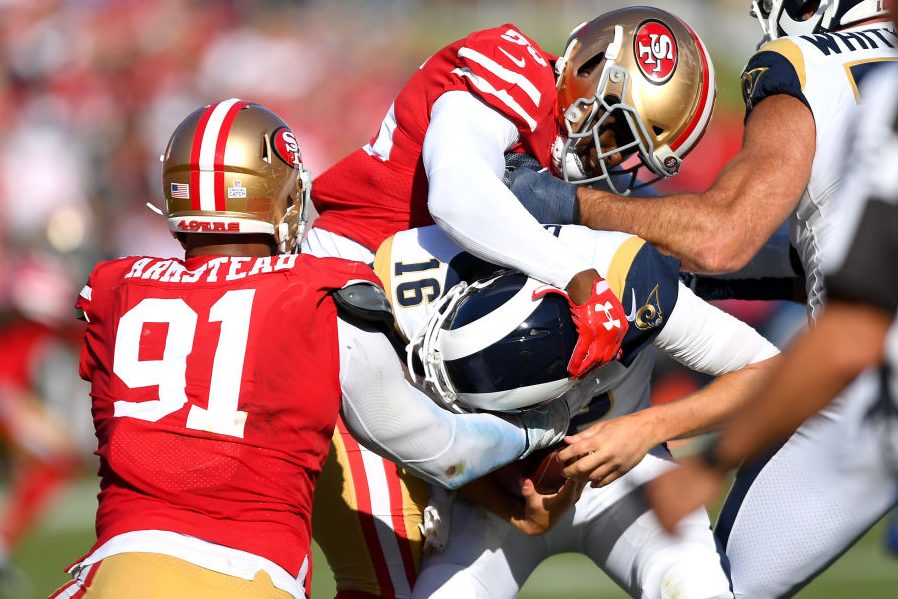 With the sixth installment of Monday Night Football wrapping up last night with the Packers edging the Lions 23-22, Week 6 of the NFL season is officially in the books and open to interpretation. While we can’t get to everything — like the Redskins winning the Tua Bowl and the latest news about Rob Gronkowski’s retirement  — here are five of the top storylines to emerge following the football week that was, and whether we’re buying or selling on ’em.

Buy: The 3-3 LA Rams are still a playoff team

After losing the Super Bowl to the New England Patriots, the Los Angeles Rams have struggled to start this season and now sit at 3-3 after losing their third game in a row on Sunday.

While a .500 record would have the Rams tied for first place were they in the NFC East, in the NFC West it has them in third as the Seattle Seahawks are 5-1 and the San Francisco 49ers are 5-0.

It’s not an ideal spot to be in for third-year coach Sean McVay, but the Rams are far from dead in the water when it comes to making the playoffs.

Though they’ve been outscored by 29 points combined over the last three weeks by the Bucs, Seahawks and 49ers, things get much easier for the Rams over their next three games with matchups against the Falcons (1-5), Bengals (0-6) and Steelers (2-4) on tap.

Even if they play poorly, the Rams (who are 11th in the league in scoring) are still capable of winning those three games and running their record to 6-3 before they play the Bears on Sunday Night Football in Week 11 following their bye week.

That game against Chicago (3-3) is also very winnable, so L.A. actually has a decent shot at being 7-3 entering the home stretch. Their last six games are fairly difficult (Ravens, Seahawks, Cowboys, 49ers and two matchups with the Cardinals), but if the Rams are even half as good this year as they were last season, they should be able to go at least 3-3 to finish at 10-6.

Last year, the NFC had two teams (Seahawks and Cowboys) that made it into the playoffs at 10-6 and a third (Eagles) that qualified for the postseason at 9-7. While the conference appears to be a little better overall this year, a 10-6 record should still be good enough for a wild-card berth.

Sell: James Winston ever being a good NFL quarterback

With five interceptions on Sunday against the Panthers, Tampa Bay quarterback Jameis Winston’s career total now sits at 68 through 62 games played. That ties Winston with Eli Manning and Josh Freeman for sixth-most interceptions thrown through the first 62 games of an NFL career. Since entering the NFL in 2015, Winston has five games with at least four turnovers. No other QB has more than two such games over that span.

Now 23-37 as a starter, the 25-year-old appears to be getting worse, not better, as his career progresses. This season, his interception percentage is at a career-worst 4.5 percent, surpassing the career-worst mark he set last year (3.7 percent).

With Tampa now 2-4 — matching their worst start in the last five seasons — Winston and the Bucs have with a pair of road games at Tennessee and Seattle on the docket before they play at home. The Seahawks are good and the Titans are desperate so there’s an above-average chance the Bucs will be 2-6 halfway through their season giving them very little shot at making the playoffs.

For an organization that hasn’t made the postseason in more than a decade, it certainly could be time to make a change at quarterback as Winston, despite his draft pedigree and raw talent, doesn’t seem to have what it takes to be an NFL-quality QB.

In his first game back after missing three with mononucleosis, Sam Darnold finished 23-of-32 for 338 yards with two touchdowns during New York’s 24-22 upset win over the Dallas Cowboys.

Darnold’s presence revitalized a Jets passing attack that accounted for fewer than 300 yards total during his absence and turned mediocre receivers Jamison Crowder and Robby Anderson back into offensive weapons.

It was encouraging to see Darnold back on the field leading his team to a win, something the quarterback who was drafted before him at No. 1 overall, Baker Mayfield, was unable to do.

It’s unfair to compare the two players as they’ve both missed portions of the last two seasons due to injuries or coaching decisions, but it certainly seems as if Darnold may actually be the better player at this point.

Admittedly, the numbers do not bear that out but Darnold has already shown that he can do more with less and has also not turned the ball over with the same frequency Mayfield — who leads the NFL with 11 interceptions — has in his short career.

Darnold did toss a pick on Sunday, but it was his first after throwing 179 consecutive passes without being intercepted, dating to Week 14 of last season at Buffalo.

Thanks to poor starts, it already looks like somewhat of a lost season for both the Jets (1-5) and Browns (2-4), but if either of these teams is going to turn things around, it feels like Darnold and the Jets are the better bet to do it.

Though it was always difficult to accomplish, recovering an onside kick and getting a chance to score on a short field was an actual possibility in the NFL.

But, thanks to a rule change that now requires players on the kicking team to stand one yard behind the line and not get a running start until the ball is kicked, that possibility has all but been erased.

The rule change makes it nearly impossible for players on the kicking team to get into a position where they have a shot at recovering a ball 10 yards downfield unless a player on the opposing team bobbles it like a hot potato.

Though that can happen, most teams deploy special “hands” teams during offside attempts to prevent costly bobbles.

This season, that strategy has been 100 percent effective as teams are 0-for-16 on onside kicks.

While it’s a good thing that rule change has eliminated the high-speed collisions that typically occur during onside kicks, it’s not good that the chance for a team to come back from two scores down late in the game by recovering a kick has basically been eliminated as well.

If Aaron Rodgers and the Packers — who are now leading the best division in football at 5-1 after winning on Monday Night Football — are going to get where they want to go, he needs help at receiver.

Though there was some optimism Green Bay’s offense would be revitalized under new head coach Matt LeFleur, it has often looked far too similar to the way it did last year when the Packers failed to make the playoffs.

Far too often, Rodgers extends plays and passes downfield to receivers who are unable to make plays for him. Last night, a play that should have ended in a touchdown ended in an interception when a well-thrown pass bounced off the facemask of an open Derrius Shepherd near the goal line.

The play didn’t end up costing the Packers the game, but it was eerily reminiscent of one that did earlier this season when Rodgers hit Marquez Valdes-Scantling in the hands and he tipped the ball into the hands of a waiting Eagles defender to seal the game in Philadelphia’s favor.

Last night, Rodgers was missing his top receiver Davante Adams and the Packers did a decent job of compensating by relying on running backs Aaron Jones (47 yards on 11 carries and four catches for 13 yards) and Jamaal Adams (104 yards on 14 rushes), but plays still need to be made by guys like Shepherd, Valdes-Scantling and Geronimo Allison (who left last night’s game with an injury).

However, it’s reached the point where the Packers should probably be looking elsewhere for help in their receiving corps and may want to pursue a trade for someone like Emmanuel Sanders, A.J. Green or Mohamed Sanu, all of whom are playing for non-contenders and are rumored be on the market.

If they don’t, Green Bay better have confidence that Allen Lazard, who led the Packers with four catches for 65 yards and a touchdown, can be a consistent second option behind Adams. Rodgers certainly needs one.