A recent study done by scientists from the Charles Darwin Research Station and the National Geographic Society revealed that the world’s greatest abundance of sharks is in the waters surrounding the Galapagos Islands. Overfishing has led to a dramatic decrease in shark populations over the last few years, but the northern islands Darwin and Wolf are home to 12.4 tons of shark per hectare. Below are images provided by National Geographic‘s Pristine Seas, and a short video on the Galapagos’ new sanctuary. 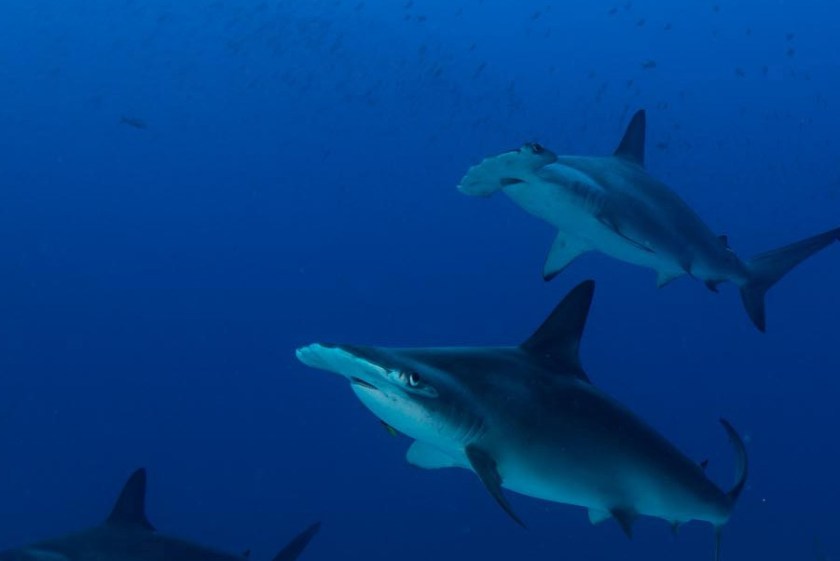 RA group of hammerhead sharks swims over the sandy seafloor populated with garden eels at Darwin Island. These sharks are known for their ability to make sudden and sharp turns as the unique wide-set placement of their eyes allows them a vertical 360-degree view, which is ideal for stalking their prey. (Enric Sala/National Geographic ) 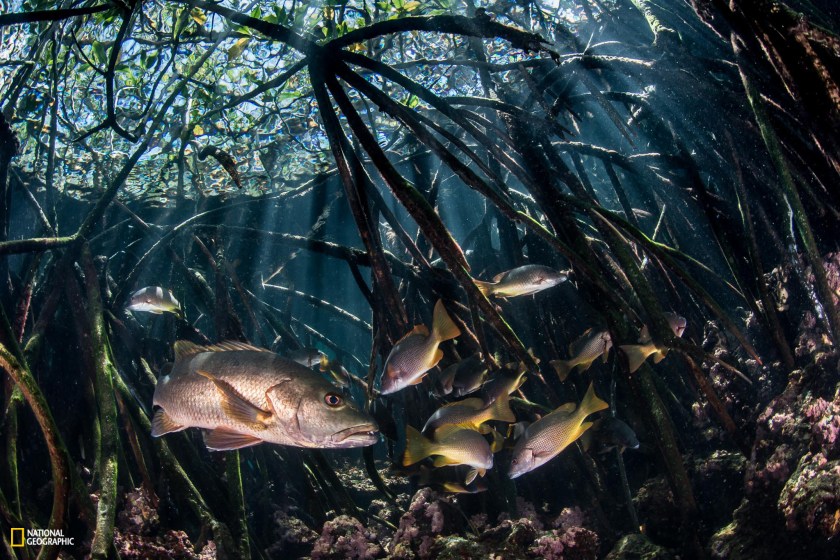 Juvenile snappers find protection from predators among the densely woven roots of mangroves at Fernandina Island. As adults, their roles will change, and they will be the ones hunting for smaller species in the same environment. (Enric Sala/National Geographic)
Enric Sala 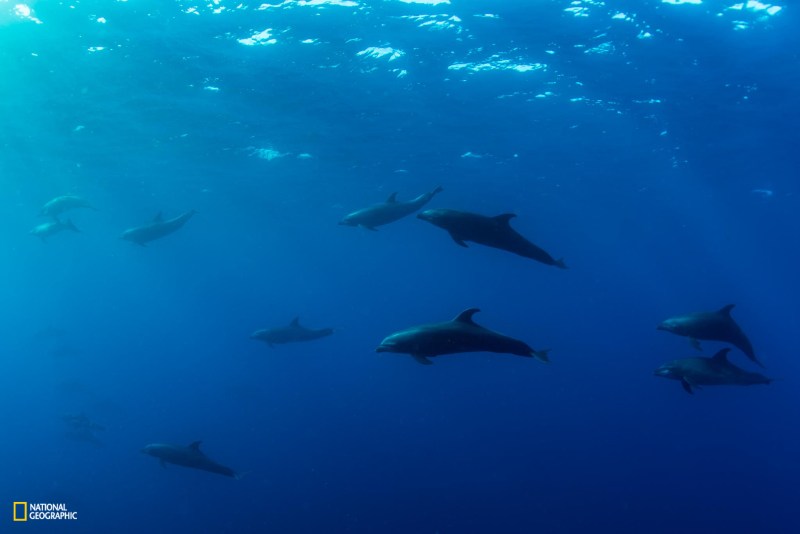 As the Pristine Seas divers rose from the depths around Wolf Island and paused to let the compressed nitrogen slowly dissolve in their bloodstream, a pod of bottlenose dolphins came to visit. Studies of beached whales and other marine mammals suggest that even these natural divers can suffer decompression sickness, or the bends, if they rise too quickly from too great a depth. (Enric Sala/National Geographic)
Enric Sala 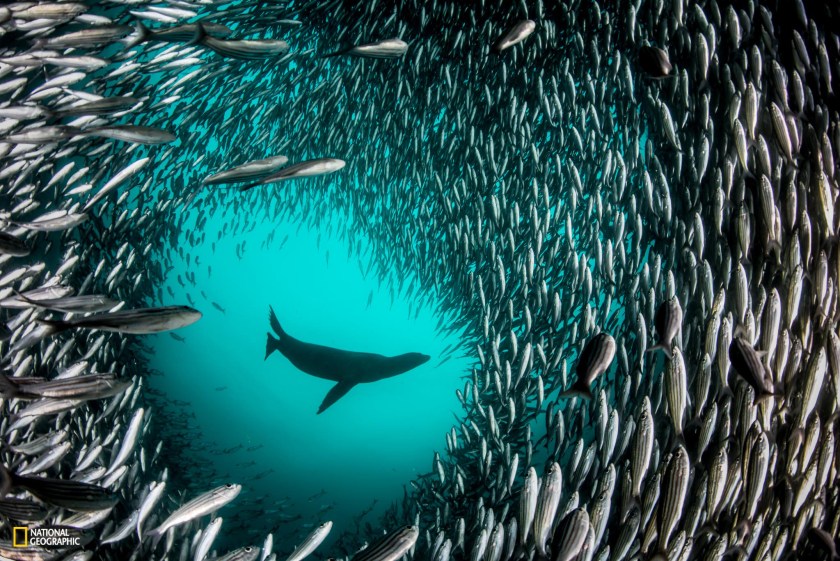 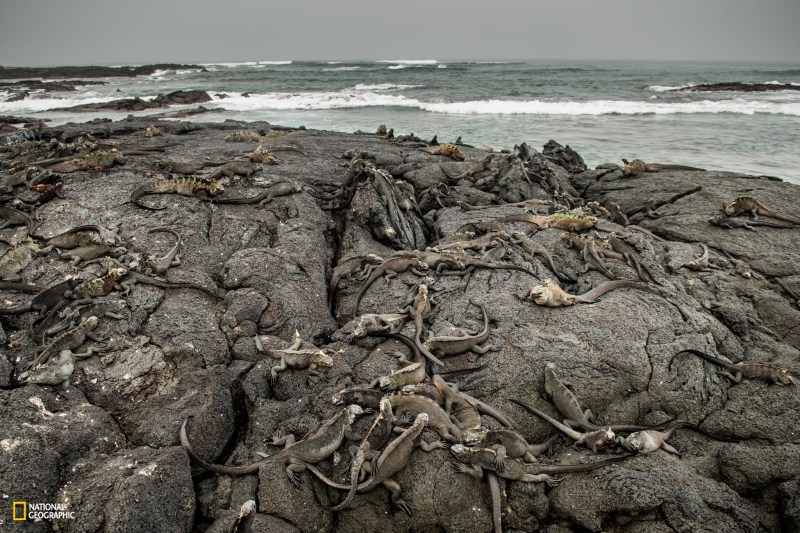 Being cold-blooded reptiles, marine iguanas must return to the surface not only to breathe but also to warm up and gain the energy to maintain body functions. Before and after their midday diving, they lie in the sun on the sun-warmed rocks, absorbing heat from above and below. (Enric Sala/National Geographic)
Enric Sala 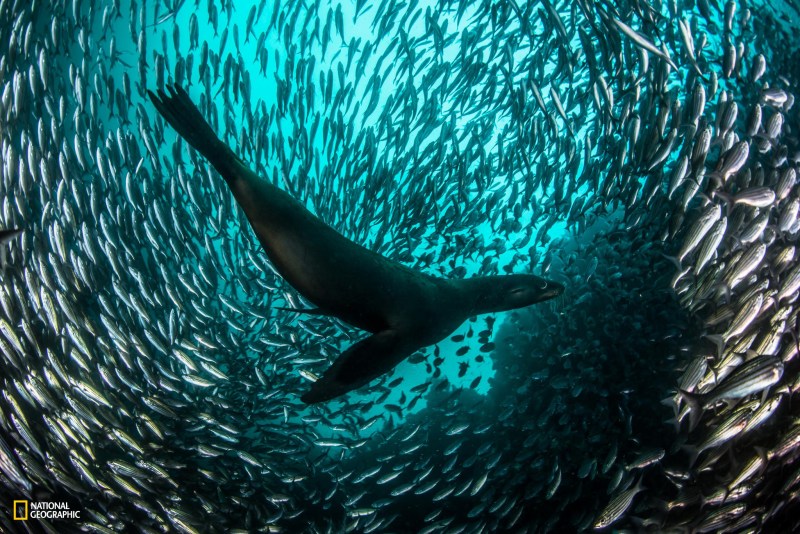 The structure of a sea lion’s flippers resembles that of human hands, bat wings and bear paws. Powering and steering with these aquatically adapted forelimbs, a sea lion is easily able to pick out a meal from a large school of salema. “These remarkable marine mammals have been almost constant companions throughout our expedition at the islands,” says Sala. (Enric Sala/National Geographic)
Enric Sala
A natural rock formation known as “Darwin’s Arch” protrudes from the water southeast of Darwin Island. The waters around the small, remote islands of Darwin and Wolf contain the largest biomass of sharks on the planet. (Neil Gelinas/National Geographic)