Over the last five years, billionaire Paul Allen, who co-founded Microsoft with Bill Gates, has made a name for himself as an intrepid explorer, leading research teams on quests to find sunken ships. And on Saturday, he triumphantly tweeted deep-water images of his latest find.

We’ve located wreckage of USS Indianapolis in Philippine Sea at 5500m below the sea. ’35’ on hull 1st confirmation: https://t.co/V29TLj1Ba4 pic.twitter.com/y5S7AU6OEl

The USS Indianapolis—a U.S. Navy cruiser that operated out of Pearl Harbor and engaged in a top-secret mission, carrying components to produce “Little Boy,” the atomic bomb dropped on Hiroshima—was sunk by a Japanese torpedo in July 1945. She went down in about 12 minutes. She completed her mission that took her from California to the Pacific island of Tinian, but met her fate while traveling from Guam to Leyte. Because of a communications failure, it took several days for a recovery mission to locate the site, and tragically, though 800 out of 1,196 sailors survived the initial torpedoing, just 316 were pulled from the water.

If the story rings a distant bell, it’s because a quasi–historically accurate version of it is told in one of the most famous summer movies of all time, Steven Spielberg’s Jaws. In the film, Orca captain Quint (Robert Shaw) tells a wide-eyed Chief Brody (Roy Scheider) and Hooper (Richard Dreyfuss) a tale of a World War II vessel he was on, which was sunk in shark-infested waters. In Quint’s version, “1,100 men went into the water … 316 men came out,” but it made for a nerve-rattling preview to the Orca’s—and Quint’s—showdown with the title aggressor.

The ships “cameo” in Jaws arguably led to the ship’s legendary status in pop culture, one that’s seen books, films, and plays produced about it. Most recently, it was the focus of a film starring Nicholas Cage, which saw a digital-only release in October 2016.

Allen’s team, aboard the research vessel Petrel, wreckage was discovered 18,000 feet below the Philippine Sea.

“To be able to honor the brave men of the USS Indianapolis and their families through the discovery of a ship that played such a significant role during World War II is truly humbling,” Mr. Allen said in a statement. “As Americans, we all owe a debt of gratitude to the crew for their courage, persistence and sacrifice in the face of horrendous circumstances.  While our search for the rest of the wreckage will continue, I hope everyone connected to this historic ship will feel some measure of closure at this discovery so long in coming.”

Below, take a look at some of the initial images from the ocean floor of the wreckage of the USS Indianapolis. Allen’s team notes that the bottom image, which features a “35” on the hull, was photo-matched to the file image below it (you can just make out the “35” on the sides of its hull).

An image shot from a remotely operated vehicle shows the bottom of an anchor clearly marked ‘U.S. Navy’ and ‘Norfolk Navy Yard.’ The anchor is consistent with the one visible in this photo dated July 12, 1945 just weeks before the ship was lost. (Courtesy of Paul G. Allen) 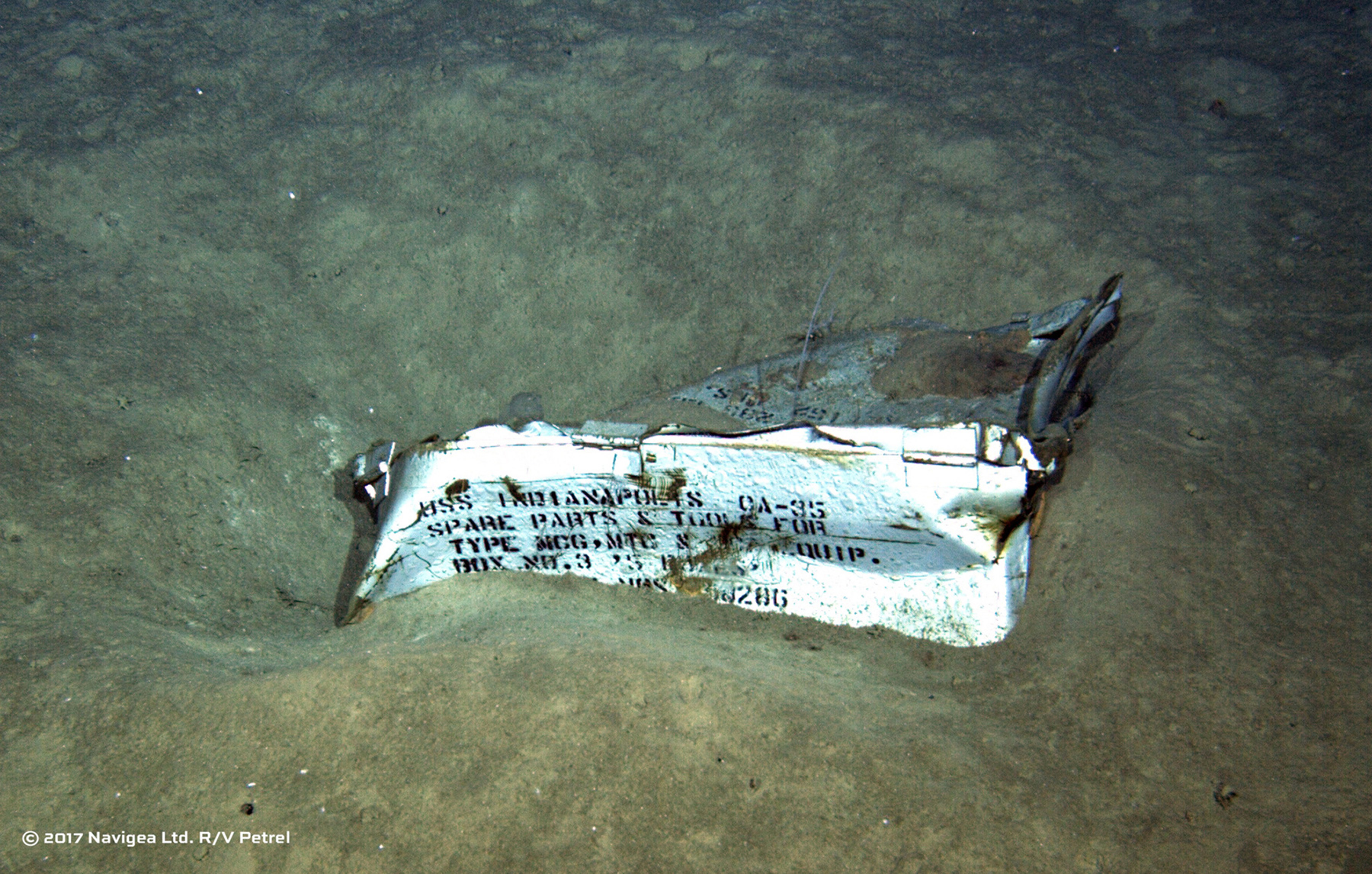 An image shot from a remotely operated underwater vehicle shows a spare parts box from USS Indianapolis on the floor of the Pacific Ocean in more than 16,000 feet of water. (Courtesy of Paul G. Allen) 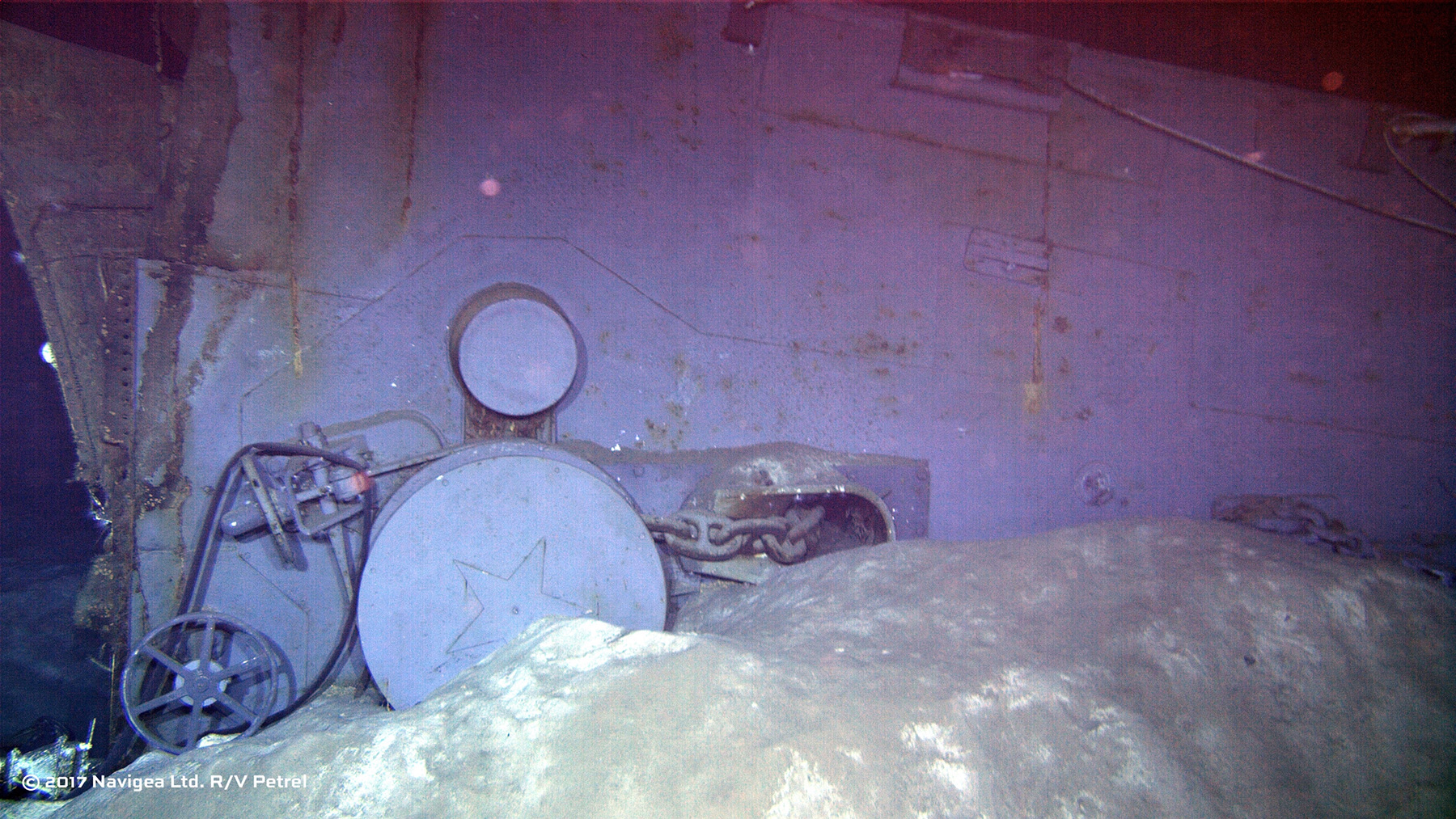 An image shot from a remotely operated vehicle shows wreckage which appears to be one of the two anchor windlass mechanisms from the forecastle of the ship. Note the star-emblazoned capstans in this photo dated July 12, 1945 just weeks before the ship was lost. (Courtesy of Paul G. Allen) 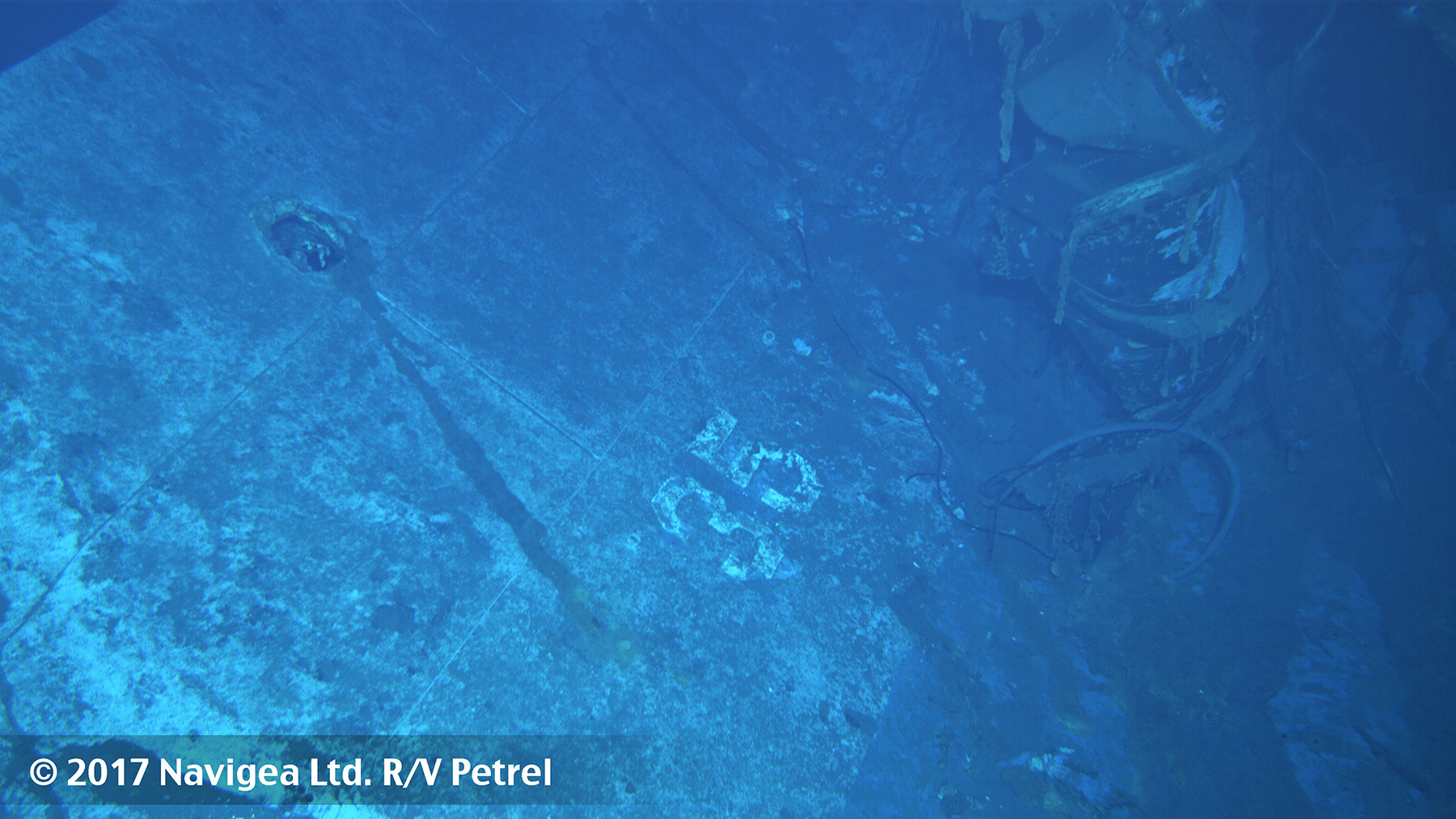 An image shot from a remotely operated vehicle shows what appears to be the painted hull number ’35.’ Based on the curvature of the hull section, this seems to be the port side of the ship. (Courtey of Paul G. Allen) 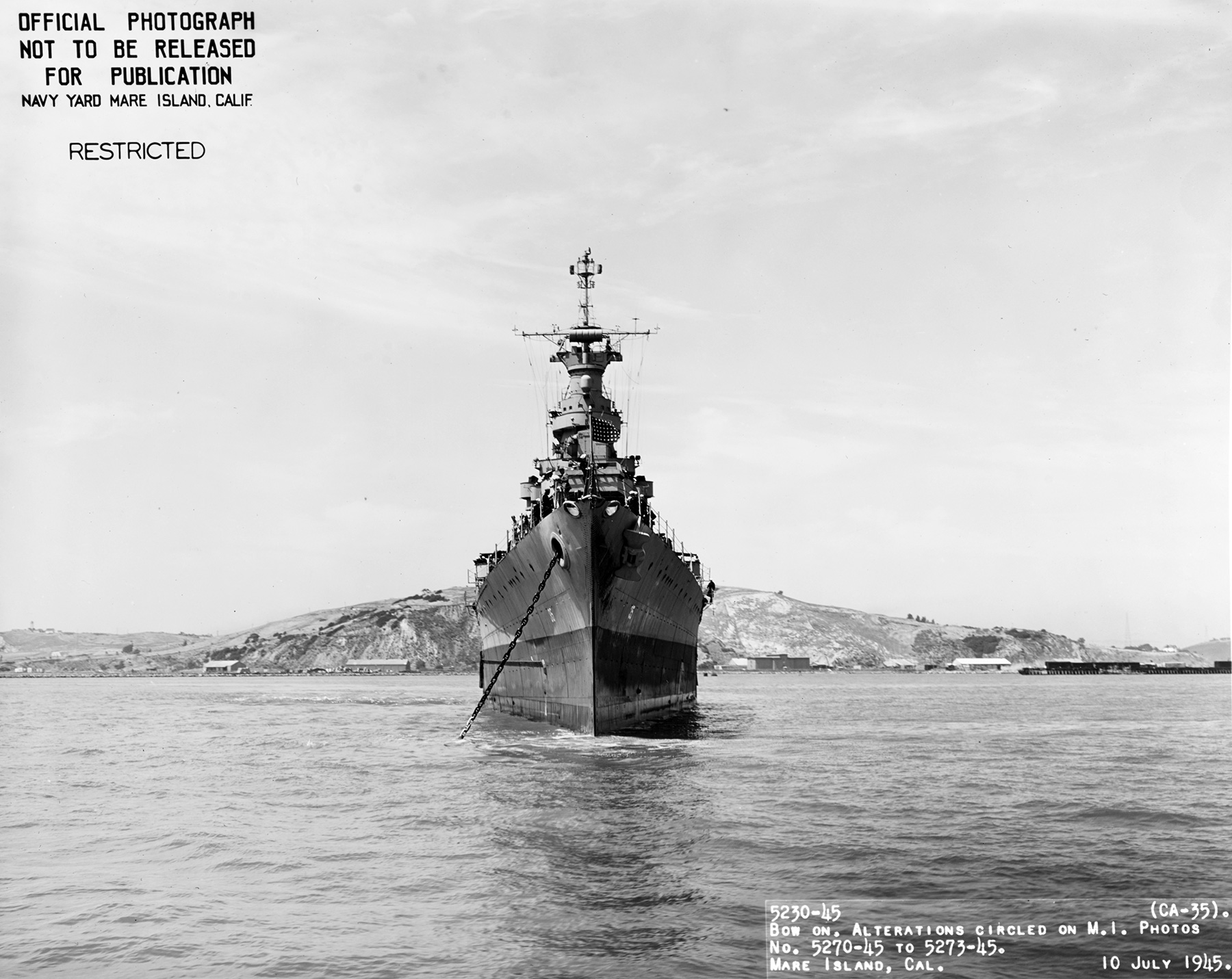 A file photo of the USS Indianapolis, taken just weeks before it was torpedoed and sunk by the Japanese. (Bureau of Ships Collection in the U.S. National Archives)