If you don’t have ‘fly honeys’ on hand, is it even a workout? 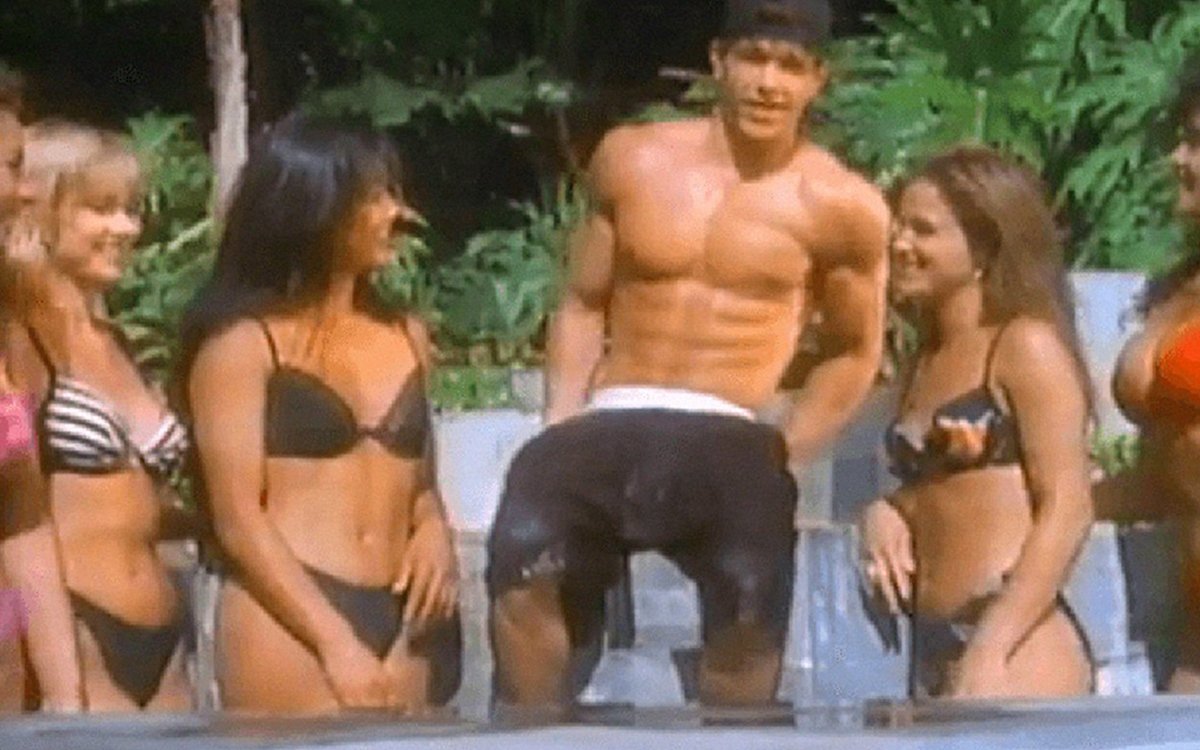 This is the first part of an ongoing series called “You’ve Got 31 Days” — i.e., the number of days you have to get in shape before June, when taking your shirt off becomes obligatory. All month, we’ll be testing a fitness routine from one celebrity or athlete each week. From Marky Mark to Dwayne Johnson to Arnold Schwarzenegger, we want to know if these regimens live up to the physiques of the superstars behind them.

It is entirely possible — easy, in fact — to forget large chunks of Mark Wahlberg’s eclectic career.

Before cash cows like Transformers, Ted and The Departed, there were boy-band cameos, Eddie Adams from Torrance, a short-lived underwear-modeling career and the sugar-coated raps of Marky Mark and the Funky Bunch.

But there’s one project you may not be aware of at all: The Marky Mark Workout: Form… Focus… Fitness, his 1993 exercise videotape.

As the mass-appeal product of a man who skyrocketed to fame because of his estimable physique, this was the perfect celebrity exercise program for me to test out first. It was only released on VHS, but fortunately, someone uploaded the entire thing to YouTube. (Beginning below, full video here.)

In the tape, Wahlberg takes you through one home workout and three gym workouts focusing on different muscle groups, all with the help of his bros (aka health experts) and a brigade of “fly honeys” (aka women). It’s all interspersed with ‘90s title cards, gratuitous shots of toned bodies and awkward scenes teasing the beginning of Marky Mark’s acting career.

Below, you’ll find the details of the workout, and how I fared. I’m no gym rat — just an average guy who grew up playing sports but put fitness on the backburner in favor of my career — so my experience should represent a pretty fair assessment of whether Form… Focus… Fitness is the exercise routine you need in your life.

Wahlberg notes you’ll need a pair of dumbbells, sturdy chairs and “if you get thirsty, a bottle of water.” Should you think he got his “Good Vibrations” bod from doing body-weight exercises at home, he prefaces this section with a caveat: “I know you shouldn’t be working out at home, but if you can’t go to the gym one day out of the week, this is what you gotta do.”

The only time the tape mentions cardio is at the very end, seemingly as an afterthought, and notes that it’s for those “trying to lose some body fat” (i.e., not Wahlberg). But my body was feeling tense after the first day, so I wanted to warm-up on the treadmill. I felt like I was cheating by not sticking to the plan, but five minutes into my run, Wahlberg showed up in an AT&T commercial on a TV at the gym like the patron saint of swole, giving me his blessing.

The weightlifting starts with a tricep dips as a warm-up, which I could only do three of, and that ended up being a harbinger for the rest of the session. Despite focusing on form instead of pushing the weight limit, as he repeats ceaselessly, I struggled through three sets of 15 reps for each exercise. Afterwards, I stretched, and continued stretching while showering and changing because my arm muscles were trembling a bit, like they were saying, “We’re alive again!” My whole body was in a mild shock; I drank a gallon of water, deliriously went into the wrong subway station, then got home and ate an avocado before passing out.

For food, he recommends eating four meals a day (egg white omelette, tuna sandwich, pasta with low fat sauce, air-popped popcorn) — the largest one two hours before working out. That meant I ate two meals at work every day, which ended up being one of the hardest parts of this regimen: I’m used to three squares a day, with the largest for dinner.

At the gym, I tried to use the Smith machine first (as instructed by the video), but I quickly learned that’s a gathering spot where guys like to take mirror selfies and chat with their muscle-shirted brethren. I know I’m new to all this, but either move those weights or move on. The stiff-legged deadlifts were the hardest, and because of the heavy leg work, I finished the workout with 20 minutes on a stationary bike so my lower body wouldn’t end up as tense as my upper had.

The four aerobic exercises he suggests are, in his words, the “stair climber or the treadmill or the bicycle, even jogging is good.” Since I had never tried a stair climber before, even in my high school and college heydays, I thought this was as good of a time as any. So I put on Marky Mark and the Funky Bunch and started climbing on a “fat burner” setting, only to become slick with sweat within five minutes. I highly recommend it — it’ll take your ego down a notch.

I did the pull-ups next because I knew I wouldn’t be able to get in more than a couple if I did anything else to start. For the most part, the back exercises were a welcome break, as my arms were taut jelly by this point. Stretching before and after proved essential.

Conclusion: With Wahlberg himself admitting the home workout isn’t a good option, and no focus on abdominal exercises or any real attention paid to cardio in the gym workouts, there’s no way this is the exact routine he used to get his ‘90s physique. Yes, I did feel the burn and feel good after doing this week of Form… Focus… Fitness…, but that’s more due to me getting into an exercise routine generally than this one specifically.

The seemingly unbalanced selection of exercises seems more like a slapdash vehicle to cash in on Marky Mark’s sex appeal than a legitimate testament to how he went from scrawny to Calvin Klein model. Of course, none of this is a big surprise, as this tape is dated and meant for mass consumption. According to some online commenters, though, it’s a godsend.

You be the judge.

Next week, I take on Dwayne Johnson’s workout regimen. Have a suggestion for one you want me to test? Send it to me at alex@insidehook.com.