Review: The Hypersphere Mini Is the Ultimate Therapy Ball for Travelers With Sore Backs 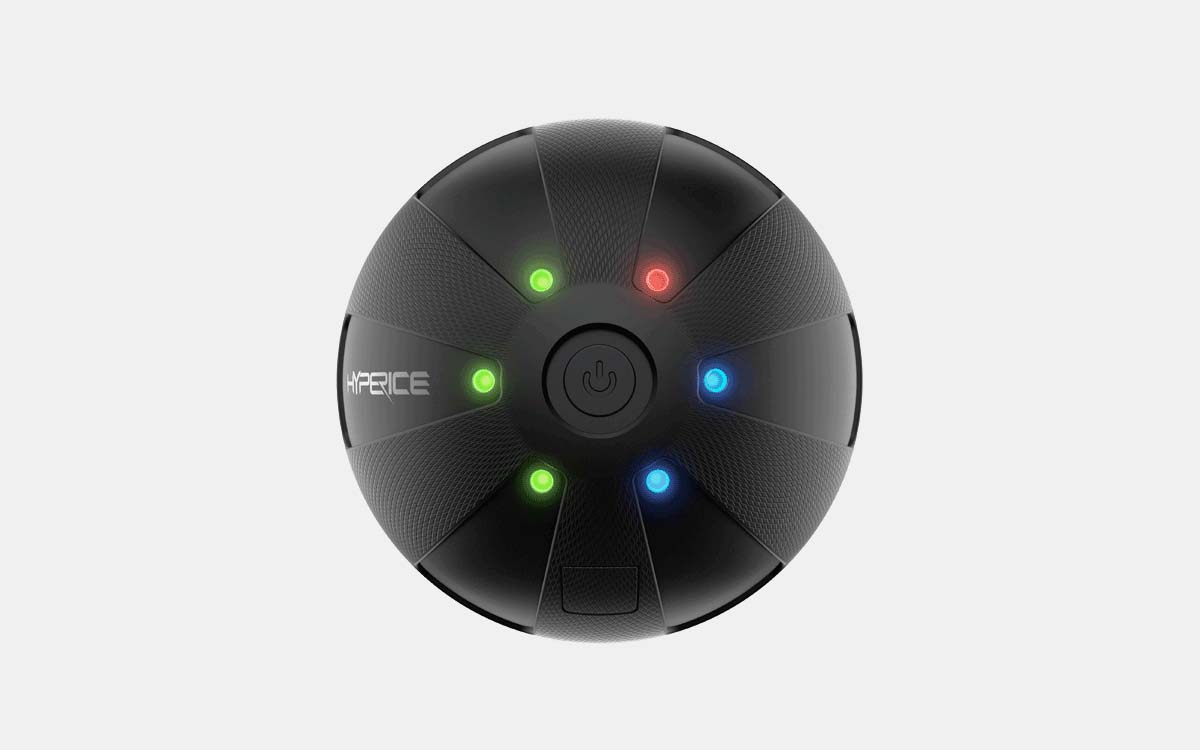 Earlier this year, we wrote about percussive therapy — the practice of tracing a motorized egg beater up and down your battered joints and muscles — and gave the method a massive stamp of approval.

Percussive therapy’s most ubiquitous instruments, like the Theragun G3Pro, or the Hyperice Hypervolt Plus, are loud, clunky machines, which do resemble a kitchen appliance, or a power drill, but they’re deadly serious advancements in recuperative fitness. These devices administer 60 pounds of force at 40 percussions a second, as newfangled, robotic derivatives of the Swedish technique of tapotement (whereby a masseuse would slap at the body with the edge of a hand), and provide instant, sustainable relief.

I’ve tried each model, and they’re legit. When you run that motor’s padded, punching head over a targeted muscle, it induces blood flow to the area’s soft tissue. The blood that streams in relaxes connective tissues, introduces infection-fighting white blood cells, and elongates muscle fibers. The man who invented the Theragun, a chiropractor named Dr. Jason Wersland, was searching for relief after a bad motorcycle accident. And percussive therapy definitely is a godsend for those haunted for years by injury. But it’s also an unrivaled lifestyle addition for those with casual ailments: aging knees, stiff backs, sore calves.

Still — there are, unfortunately, two problems with the market’s two best percussive therapy devices: They’re both big and expensive. These aren’t devices that you can nonchalantly pack in your commuter bag, let alone a suitcase. They need an outlet to charge, they’re meant to be transported around in mini briefcases, and they each make a whole lot of noise. Plus, as mentioned, the price. The Theragun G3Pro is $600, and the Hyperice Hypervolt Plus is $450. That’s good for a year’s gym membership in most states. Or a round-trip flight to Europe. I would argue that over the course of several years, the investment in your health and happiness would be worth it, but the fact remains — it’s a lot of dough.

We were excited, then, when we learned that Hyperice had released a much smaller, and far more affordable percussive therapy device earlier this year. It’s called the Hypersphere Mini, it retails for a reasonable $99, and it’s as portable as they come, between the size of a baseball and a softball. We’ve been testing it out for the last two weeks, and we have some thoughts.

Hyperice debuted its vibrating ball in November of 2015, following a five-year run of launching products beloved by pro athletes; LeBron was rocking the company’s shoulder ice compression sleeve way back in 2012, and Lindsey Vonn and Blake Griffin helped Hyperice launch a vibrating foam roller in 2014. That original Hypersphere, which you can still purchase, is 5″ in diameter. The Mini, meanwhile, is just 3″ in diameter, and when turned on, kind of looks like that thermal detanator Princess Leia brings to Jabba the Hutt’s jazz club in Return of the Jedi. It fits easily in the palm of my average-sized hands and is comprised of a dense, motorized shell armored in black, silicon grip texture.

There’s a power button in the middle, which you have to press down, hard, for three to five seconds to turn on the ball. A quick jab at the button after that will activate the lowest level of vibration, and subsequent jabs will raise it to levels two and three. I would recommend getting situated before turning it on; once it gets going, it can easily slip from your grasp if you’re not paying attention. The best way to use the Mini, as I learned after experimenting with doorframe and couches, is to lay a thick yoga mat out on the floor.

When Hyperice built the Mini, and the original Hypersphere before it, they were improving upon the lacrosse ball massage, a method of addressing “trigger points” by pressing sections of the body against a lacrosse ball. This is also known as self-myofascial release. Fascia refers to the connective tissue that spiderwebs throughout the body, connecting one’s muscles and joints. When this tissue becomes distressed, tight or neglected, range of motion is adversely affected and exercise leads to more soreness. The Mini takes this blueprint, and adds some serious juice. I set the ball to its lowest level, and started worked it around the body.

The key points you want to hit, in case you have no clue know where to start, include: your hamstrings, your glutes, your lower back, your upper back and shoulders, your upper chest, and your feet (the plantar fascia in particular). The Mini works best when you fully commit; you have to roll it around a bit, until it finds the area, say, deep in your glutes, that’s a bit knotted. Then you want to press into it against the ground, and allow the vibrations to go to work. When administered correctly, it goes beyond the efforts of a lacrosse ball or foam roller. It wasn’t as intense as a Hypervolt or Theragun, but I immediately felt blood rushing to the area (your skin gets hot) and could feel some activation.

Where the Mini is a huge home run is on the upper back and feet, two places where I’ve struggled to use a larger percussive instrument, without the help of a trainer or friend. For the back, let it roll against your trapezius muscle, which connects your upper back, neck, and shoulders, and is definitely suffering from days of shoulders rounded towards screens, and for your feet, you’ll want to stand up and roll the soles of your foot directly on top of it. I wouldn’t recommend going too long for these moves; 30 to 60 seconds for each area should do. Stray on the shorter side if you’re warming up to exercise, go longer if it’s post, or just an end of day stretching session.

The size of the Mini can’t be stressed enough; this is a game changer for travelers. Anyone whose limbs or lower back lock up after an extended period of time on a plane should absolutely pick one up. It’s TSA-approved, so you can just toss it in your luggage and break it out in the hotel room. We’ve stressed the importance of not abandoning fitness over vacation before. As for some nitpicks, the initial charge takes a while. You’ll probably just want to leave it plugged in overnight. Thankfully, though, it charges with a USB cable, and lasts a full two hours. We’d also point out a bizarre tendency, where the small “door” of silicone that covers up the charging port, tends to bounce out when the vibrator runs too high. This doesn’t happen on lower settings, but can be a bit annoying on the third setting.

For those who remain unconvinced, who’d point out that they can pick up 100 lacrosse balls for the price of one Hypersphere Mini — fair enough. But it’s abundantly clear to someone who’s tested both that a static lacrosse ball pressed against tissue, while effective, will not produce half the results, in double or triple the time, as the Mini’s high-intensity vibration.