Where to Get the Best Beer-and-Shot Combos in NYC

Because why choose between a beer and a shot when you can simply have both? 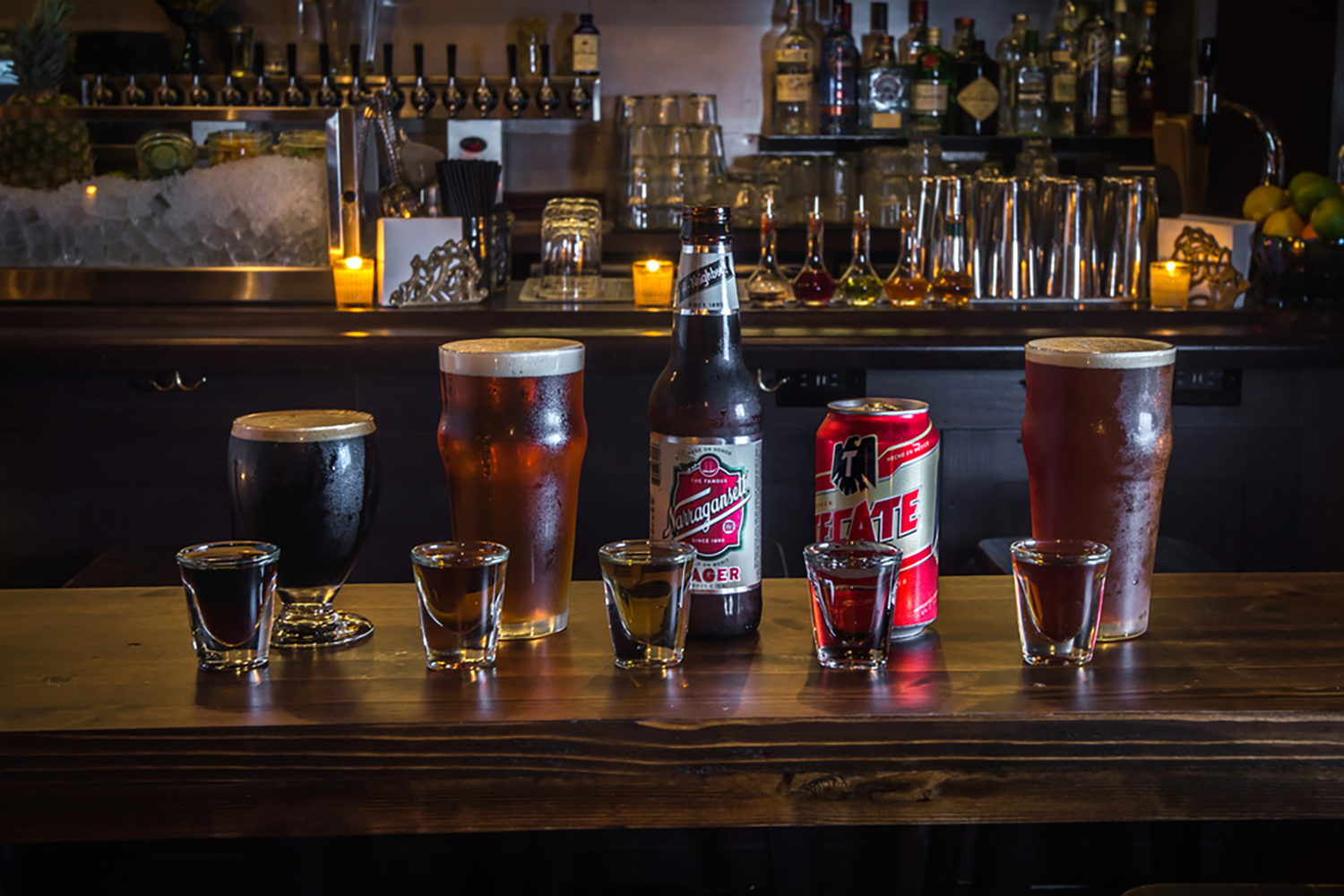 Boilermakers at the eponymous East Village bar.
Boilermaker
By Shari Gab / October 10, 2019 8:31 am

Ah, the Boilermaker, that much-beloved invention that marries two of our favorite things: a shot of room-temp liquor and a cold pint of beer. It’s fun, it’s dependable, and it’s usually a great deal (unless you’re at some celeb-owned fake dive bar).

Traditionally, the shot-and-beer combo consists of rye whiskey and a lager, but as the special continues to gain popularity, we’ve been thrilled to see more out-of-the-box pairings popping up that are, well … worth a shot.

Below, we’ve compiled a list of go-to haunts for knockin’ ‘em back.

Nitecap is a fabulous little subterranean joint that has that speakeasy feel without all the pretense and passwords. Their “shorties” menu doubles as a beer-and-shot roster, with plenty of options for accompaniments, from Old Grand Dad 100 to Ocho Plata Tequila mixed with pineapple and pickle brine.

You’ll head into Burnside for their epic burgers, including a vegetarian version named the Juicy Loosie. You’ll stay for the atmosphere and awesome table shuffleboard. And to keep things lubricated, throw their Beast and Bourbon beer ‘n’ shot combo down the hatch for $5 a pop.

They’ve been in the game since 1916. Chances are, they know what they’re doing. Happy hour brings their famed Old Man Can special of either PBR, Carling, Schaefer, High Life, Miller Light or Genesee Cream with any well shot for just $3.

A true blue (and gold) dive, what the Tavern lacks in elegance they’ve made up for in creativity. With an early Happy Hour starting unofficially around 4 p.m., you can get the tried-and-true beer/shot combos we’ve come to know and love. But they’ve also got some interesting takes on the duo, including the Dirty Hipster (PBR and Jäeger) and the Redneck (Jim Beam with a can of Genny Cream) for $6 each.

Beer and shots aren’t always the best idea, but after midnight, they tend to be the best idea of all time. For just such debauchery, The Library’s $8 combos are appropriately $5 when the clock strikes 12 and come with neat little action figures to boot.

A beer-and-shot institution since 1933, Rudy’s has that hometown watering-hole feel with Manhattan appeal. It’s cash only, and a beer and shot will run you $5. If you ask, they’ll also give you a hot dog on the house.

We couldn’t have a complete list without including the eponymous locale itself. Boilermaker has a strong roster of curiously coined combos from the Amaro Never Dies (a dark ale and Amaro Montenegro) to the All-American (an 80-proof bourbon and Narragansett). There’s also the crowd pleaser: a bucket of High Life and six Buffalo Trace bourbon shots for $40.

Healthy cocktails are still just that … cocktails. And the rage has now invaded beer-and-shot territory to prove it. Edi & the Wolf’s sister spot has pairings such as the Radeberger Rhubarb: a Pilsner shandy paired with bourbon, rhubarb juice and fresh muddled tarragon. Check your eye roll at the door.

A skate bar that attracts a genuine skate crowd, 101 Wilson offers draft Buds and well whiskey shots for $5. A no nonsense beer/shot combo, the way the good lawd intended.

While this locale doesn’t specifically list a beer-and-shot combo, it is in this humble editor’s opinion, it’s the best bet in town. OTB makes their own pickles and, thereby, has fresh pickle juice. And while you might not think much of it, it makes literally all of the difference. Order a pickle-backed shot with your favorite draft beer and thank me later.