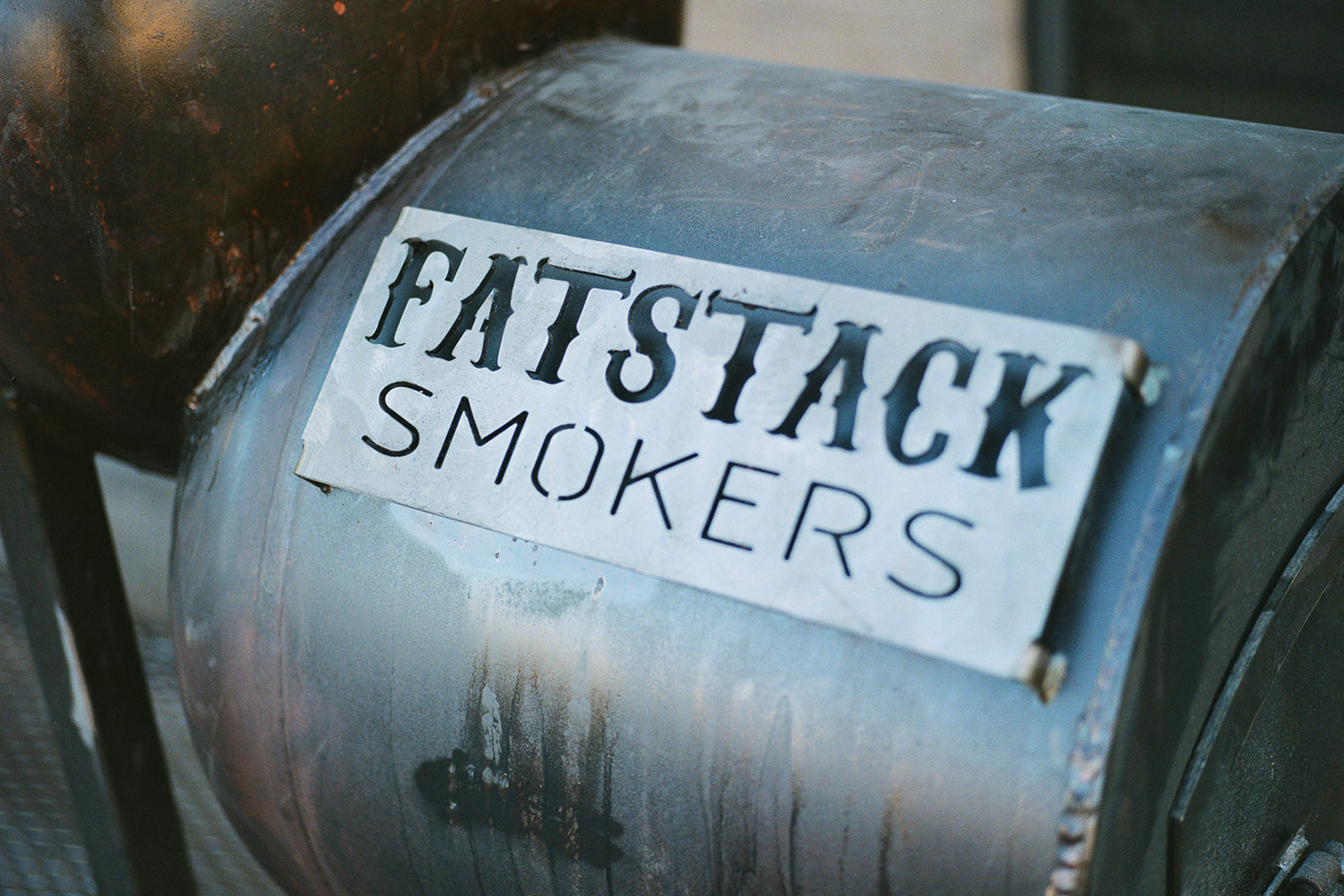 Cult favorite Fat Stack Smokers is behind some of the nation's best barbecues.
Ben Pier
By Bryan Whalen / December 3, 2019 9:05 am

On any given day, you’ll find Eric Wech hunched over a propane tank with a welder’s torch in hand, sparks flying, sweat dripping from the red and bearded face beneath his mask. Wech is the owner and founder of Fat Stack Smokers, a small company with a cult-like following that supplies some of the country’s best barbecue restaurants with custom Texas-style barbecue pits.

But Wech’s workshop isn’t in Dallas or Austin or San Antonio. It’s in Sun Valley, California, a suburban neighborhood of some 75,000 people just north of Burbank. And while he’s attracted a huge following around California, his influence in the world of slow-cooked meats extends much farther. We first learned of Fat Stack earlier this year from Chicago Chef Brian Bruns, who ordered a 500-gallon behemoth from Wech for his new smokehouse, Flat & Point, after finding Fat Stack on Instagram.

The waiting list for a Fat Stack Smoker is long; like everything smoking-related, building one is a slow, deliberate and intensive process. But the brisket that comes off Wech’s grills has a reputation for helping push a novice barbecuer toward the big leagues, so we recently visited Wech to learn more about his creations, how he got started and how to get your hands on a Fat Stack Smoker of your own.

InsideHook: Does Fat Stack have an origin story? How did you get started?

Eric Wech: Well, I met my business partner, Steve Vartazarian, because he took a welding class at the place where I was teaching at that time. He was like, “I want to build an offset smoker. Do you know how?” And I was all excited because I’ve always loved barbecue. So I said, “Hell yeah,” and not long after that he was like: “You know, I’ve got this storage unit up in Sun Valley and I’ve got a couple of propane tanks in case you want to build a few smokers.”

I was a bit skeptical at first that anyone would want a propane tank smoker in Los Angeles. I mean, I knew they were popular elsewhere — it’s a big thing in Texas, obviously — but they’re kind of bulky for urban environments like Los Angeles, and it’s a big endeavor to make one. So I was like, “How is this going to pan out?” But I documented the build of that first one. I put it on my personal Instagram. I was like, “Hey, here’s this thing I’m building.” And by the time that one was finished, there were four more orders. It’s gone crazy from there on out.

How long ago was that?

That first one was over two years ago, in 2017. I think we’ve built 36 smokers since then, with more and more orders stacking up each day.

What’s the process for placing an order?

The process of ordering a smoker from us is pretty straightforward. The first step is just to contact us through email, website, phone, whatever. If you know what size smoker you want, you just say: “Hey, I want a quote for, you know, like a 500-gallon smoker, or a 250-gallon, or an Octo.” But if you don’t know — and most people don’t — we can walk you through the whole process. I love barbeque and I love smokers, so I like talking about anything barbeque or smoker related.

And how long does a build usually take?

Depending on what kind of smoker you want, the wait time is anywhere from 3-to-6 months. The Octos, which honestly make the best brisket I’ve ever had, have a shorter wait time, because we don’t have to locate the propane tanks in order to make them. I designed those myself. The 250s and the 500s take a little longer, and a lot of people are interested in those because they like the aesthetic and because that’s what people are used to with Texas-style barbecue.

With regards to choosing the right smoker, my goal is always to build the smoker that’s going to do the job that you need it to do, whether that’s you in your backyard trying to make a couple of briskets for your family, or you trying to do 40 or more briskets for your restaurant. The best tool for the job is what I’m always going to be after. I’m doing this because I’m passionate about it, and that passion stems from two things: How much I love welding and how much I love barbecue.

And if some readers wanted to try to make a Texas-style pit for themselves, how would they go about that? Say, to make a 500-gallon smoker? Could you walk us through the process?

Sure — there’s a few steps, but it’s fun and I definitely encourage people to try to make one for themselves if they’re interested in that sort of thing. The first step is locating a decent propane tank. If you want to build a 500, which is huge for your average person, you’ll need a 500-gallon tank.

The second step is preparing the tank for fabrication. The biggest concern here is how to cut into your tank safely, so you can start cutting openings — doors, chimney, firebox, etc. Propane is flammable and if contained explosive, so the idea of cutting into a tank of this stuff with a flame can get a little nerve wracking. Here at the shop, we use a multi-step process that involves measuring for any residual gas or fumes and ensuring the tank is completely empty before we start cutting. If someone’s planning to do this at home, I would recommend that they do their homework and are 100% certain that they’re not doing anything that endangers themselves or anyone else. If there’s any doubt, leave it to the pros.

Once that’s done, we put the thing onto a fabrication cart that raises it up to the height that it’s going to live when you’re actually using it, and we flip it upside down. If you look at that tank over there, you can see how the feet of the propane tank are sticking up in the air like a dead bug. We flip them over for a number of reasons, but the main one is to expose the good looking side of the tank. It’s kind of like when you’re carving a pumpkin as a kid and you’re looking for that perfect surface with the large surface area, so you can carve a nice face. Same idea. On the bottom of the propane tank, you’ll usually find the biggest unmarred section of steel that doesn’t have a weld seam or a bunch of plug fittings, and that’s where we put our doors.

So we get the thing up on a cart, carve out the doors, mount the hinges, and then once it’s open, we cut out a place for our cooking grates. Then we mount the fire box by cutting another propane tank, and we weld that on. We cut a door in that and then you’ve got your firebox door. Then we move onto the process of mounting the stack.

Once the bones are in place — you got your firebox on, you’ve got the stack on — then you fit all your cooking grates, make sure they’re the right size. Then you do all the finishing stuff: the damper for the stack, any shelves, grates, things like that. And the last thing is, once everything is set up, you do a test cook. That’s the best part.

Why make this style of smoker, as opposed to, say, a drum smoker or something less involved?

Well, our smokers are visually representing Central Texas — Austin and Hill Country — and that’s the best barbecue in the world, in my opinion. The thing with barbecue is that everyone has a certain thing they do, and they all claim that they do it best. The Carolinas have their pulled pork and Kansas City has its ribs. But the thing about Central Texas is their brisket, and I tend to think that if you can do brisket in that style, you can do almost anything else. Because brisket is, I think, one of the most finicky pieces of barbecue to cook properly. If pulled pork goes wrong, it’s kind of hard to tell unless something goes really wrong, because it’s a pretty forgiving cut. Same thing with ribs and sausages. Brisket is different. If you mess up your brisket, it’s obvious, and the only way to do a perfect brisket is to use a Texas-style barbecue pit. Most of the major barbecue joints in that region of Texas use propane-style tanks, so ours are a reference to that.

Finally, how did you learn how to do all this?

For me, barbecue and welding have always gone together. I got into welding because another hobby of mine is off-roading and jeeps, and when you’re tricking out your truck, wanting to put bigger tires on it or whatever, you always have to move things around — move an exhaust pipe, for example — so I learned how to weld so I could do that.

This buddy of mine in the Valley had this terrible Harbor Freight wire welder in his backyard, and so one day I borrowed his helmet, and I pulled the trigger and made the worst weld I’ve ever made in my life, and I just immediately fell in love. I’m like, ‘Well, this is what I’m doing from now on.”

The first thing I made was a set of fenders, and the very next thing I made was a 55-gallon barbeque drum. Then I started making Texas-style pits around the same time that I met my business partner, Steve, and then I designed the Octos, and everything has just taken off from there. We just hit 15 states. We’ve sold to a guy in the Philippines, a guy in Mexico City, a client in the United Arab Emirates. Apparently it doesn’t matter where you’re from, the concept of slow-cooking animal proteins next to a fire seems to be ingrained into what it means to be human. It’s like it’s part of everybody’s history.