The Sweet Origins of the Choco Taco 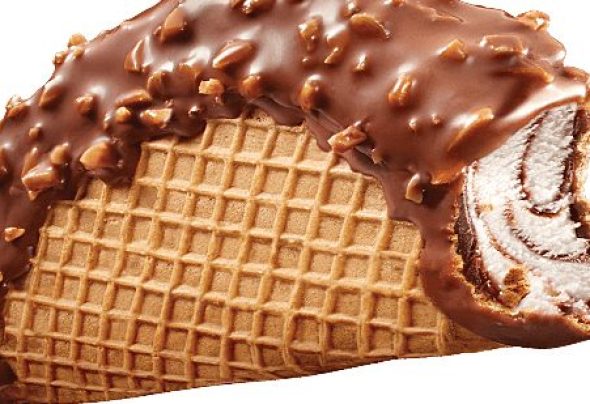 Like the origin tales of many things, the truth behind how the Choco Taco came to be has been stretched a bit. Its inventor, Alan Drazen, likes to tell people that the idea for the sugary twist on the savory Mexican food staple came to him in a vision while lost in the desert south of the border. (That’s a lie.)

The truth, however, is that Drazen invented the chocolate treat in Philadelphia in 1983.  The former ice cream truck driver was working in management for family-owned sweets purveyor Jack and Jill. Drazen came up with the Chaco Taco as a way of boosting slow sales during the fall, inspired by the fast-growing Mexican community in the United States at the time. As a result, Drazen reinvented the ice cream eating experience and gave his employers a product that was uniquely associated with their brand. (For more on its history, listen to an NPR report from its food blog, The Salt, below.)

Aside from it’s unusual appearance, the Chaco Taco had several distinct properties that made it stand out: The layers of chocolate, cone, ice cream, and nuts gave customers a new way to enjoy a familiar desert. And Jack and Jill was able to reuse one of parent company Good Humor’s cone machines to produce the folded waffle in-house, saving time and money.

Food blog Eater caught up with Drazen to discuss some of the treat’s other secrets. The food site wrote:

“The Choco’s structural integrity also comes from the layer of chocolate sprayed inside the shell, which holds it together just like guacamole in a corn or flour tortilla (this edible insulation would also become standard at the bottom of a sundae cone). The Choco was also one of the first products to use a ‘metalized polypropylene’ wrapper instead of paper. Both features help maintain the taco’s crispness, albeit, as anyone who’s ever had a Choco Taco knows, with mixed results. ‘It is a challenge, concedes Drazen. ‘It continues to be a challenge.”