Because every Angeleno loves to eat, even if he has to valet, we bring you Table Stakes: a series that answers man’s eternally recurring question (“Uh, what’s new?”), and recurs once every lunar cycle or so. Bon appétit. 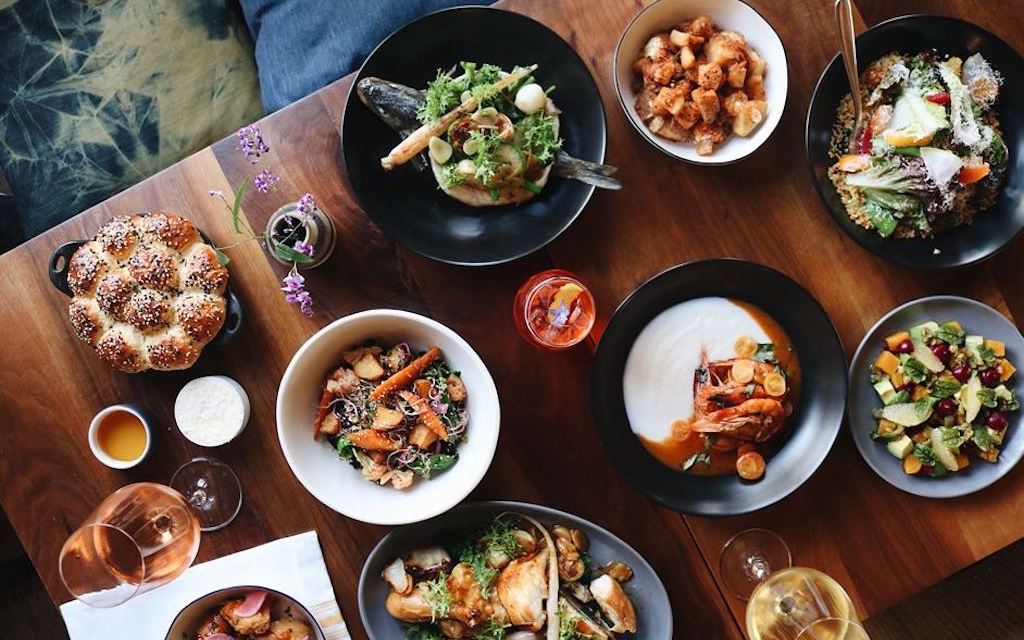 You’re here because: You’re a fan of chef/co-owner Jason Kim’s Forage — not necessarily just the delicious Korean flavors, but his uncanny ability to maximize flavor from seemingly uncomplicated dishes. With their brick and exposed beams alongside the visible kitchen, Small Town is a cozy, cabin-in-the-woods date spot without the teen-slashing serial killer.
You’re dining on: Salads are seldom a headlining dish, but the Market Lettuce Salad here is one of the very best salads we’ve had anywhere in Los Angeles. A citrus explosion plays nice with Piave cheese and dressing, and they top everything with panko to add some crunch. From there, move to the Pork T-Bone, where agrodolce sauce, potato mash and cabbage combine into a sweet, savory bite that is ever-so-satisfying.

You’re here because: If not The Edith and its dizzying array of champagnes, grab your old-school boss or client and take it to the main floor of Del Frisco’s, the kind of spot where you’d expect to find Don Draper polishing off a New York strip. Del Frisco’s has the feel of a bygone era, and one that pairs naturally with red meat.
You’re dining on: Is it even a question? Steak. Steak. Then more steak. Pick your favorite cut, whether it’s a bone-in filet, prime rib-eye or Japanese A5 Waygu (we’re partial to the strip, but we’re a simple kind of carnivore), throw on a lobster tail if you’re feeling frisky and enjoy the one multiple choice test in life that has no wrong answer.

You’re here because: It’s your favorite coffee’s favorite coffee. Intelligentsia has been one of the premier names in the caffeine game for some time now, and their new coffeehouse sits on the site of artist Paul De Longpre’s former estate. The ceiling is a mosaic of a floral field, the front wall has a pansy mural and the counters mimic De Longpre’s cobblestone paths. It’s design with intent, and it’s worth checking out for yourself.
You’re sipping on: Coffee is a creature of habit, but there is always occasion to mix it up, and putting your faith in Intelligentsia is always one of those times. The menu switches up daily, and is filled with unapologetically creative new ways to consume your favorite stimulant. Our choice is the Espresso Black Cat Fizz: espresso, orange bitters and tonic water. Light, bubbly and refreshing (unlike an iced vanilla latte), it’s something you could see yourself having after a morning sweat. And we haven’t even gotten to the baked goods, fresh from Mr. Holmes Bakehouse. You’ll just have to try those for yourself.

You’re here for: A late-night, low-key libation next to someone with whom you’d like to waste the night away. Tucked away inside a restaurant on 6th and La Brea, Brandon’s is a speakeasy hideaway with dark-stained wood-paneled walls and a quiet, candle-lit ambience. Psychedelic contact paper covers the floor-to-ceiling windows, creating a starburst of color at sunset. Combined with vinyl-only music and there’s an unmistakable retro feeling, which also happens to be a very good feeling.
You’re sipping on: You can’t go wrong with any of the cocktails on their list, and the bartenders on the other side of the slab can make you anything you’ve ever dreamt up. We’re ordering the Hey Buddy, Got a Light: blended scotch and amaretto finished with smoke under a hood. It’s as high a concept of an old fashioned as you’ll see. One last tip: grab yourself a brown rice crispy treat if you feel like a bite to go with your nip.

You’re here because … The rain is finally starting to subside, and higher temperatures are right around the corner. And because Salt & Straw and Sweet Rose can’t be the only two high-grade ice cream games in town.
You’re dining on … One of 15 flavors of ice cream that rotate daily (there are nearly 40 total). SuperCool uses a liquid-nitrogen process to create an ever-so-smooth treat that’ll have you believing summer is indeed nigh. Whether you’re a cookies and cream, rocky road or mint chip type, SuperCool is another quality option for indulging your sweet tooth.