Reagan, JFK, Eisenhower Among U.S. Presidents Who Were Prolific Doodlers 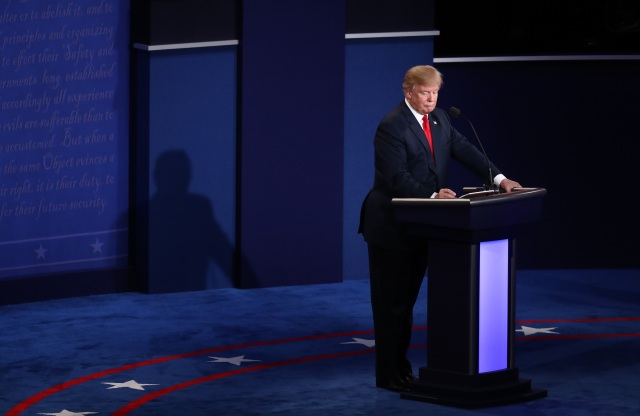 Now that Donald Trump has been officially sworn in as president, every scrap of paper that he writes on from here on out will become a collectible piece of history. As you might remember, during the debates, many people wondered what Trump was scribbling while it was Hillary Clinton’s turn to speak. The late-night talk shows had a field day trying to figure it out, but we’d like to suggest that it was just harmless doodling, which according to history, is a rather presidential thing to do.

Yes, there have been a number of commanders in chief throughout history, who’ve been prolific doodlers, each with his own style of cartoonish gibberish. Below, we’ve included some of the most artistic examples (including a piece of doodled presidential memorabilia that you’ll have the opportunity to buy soon).

Herbert Hoover: Hoover wasn’t that popular a president because of the Great Depression and all, but he sure knew how to doodle. Specifically, abstract, M.C. Escher–like stuff (as well as some relatively childish work, too; see below). If only quality of doodles equaled presidential popularity. Read more about his doodle-manship here. 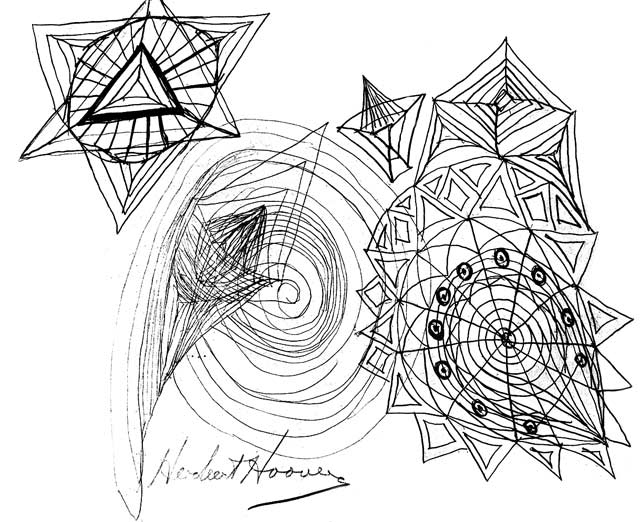 William Jefferson Clinton: Back in 2013, a series of doodles drawn by President Bill Clinton while in office were leaked to the press. Pictures included a limousine, the front wheel of a motorcycle, and a dragon. To view the doodles, click here.

John F. Kennedy: JFK’s presidential library notes that it has hundreds of presidential doodles stowed away from Kennedy’s short term in the White House. He was a big fan of rectangular boxes around words, as is evidenced below. During one meeting from 1962, Kennedy scrawled “cheese” among other words, including “Austria,” “commission,” and “unemployment.” It’s now become known as the “cheese doodle.” Take a look at an entire folder of JFK doodles here.

Lyndon B. Johnson: Kennedy’s vice president and eventual replacement, LBJ, certainly had his work cut out for him—and proved a particularly playful doodler. (Could this have been the first double-doodler presidential ticket?) Below, take a look at one of his better doodles, featuring a highly suspect three-eyed alien octopus that’s enjoying a cigarette.

A doodle by President Johnson (Handout) 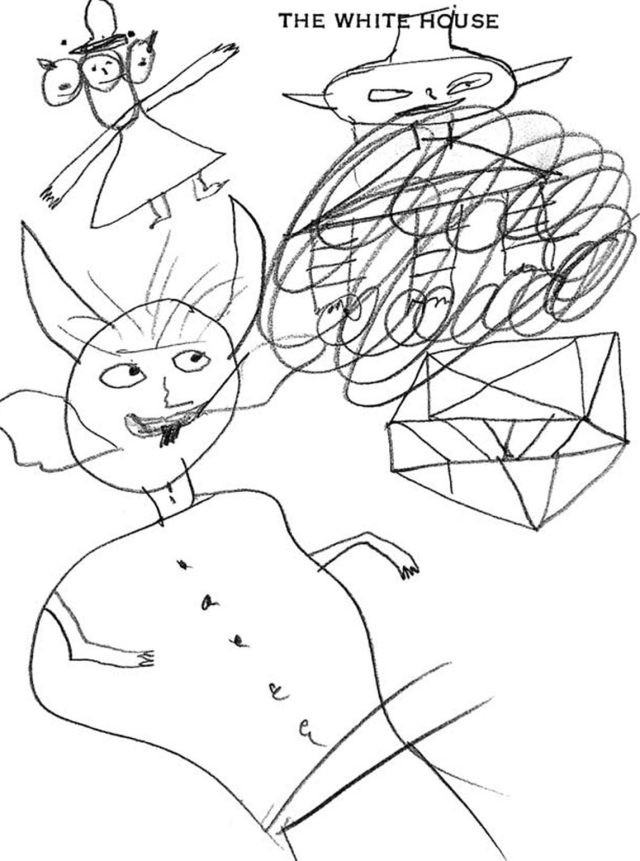 Another doodle from LBJ (Handout)

Andrew Jackson: Circa 1833, Jackson drew what appears to be an alligator on a document (we say “appears,” because it looks pretty friendly and lovable). Take a look at it here.

Theodore Roosevelt: You can marvel at a hilarious doodle Teddy drew in a letter of his daughter Ethel meting out discipline to two of his young grandchildren. Take a look at it here.

Ronald Reagan: Given that he was an artsy guy before his White House stay, we can imagine that that had something to do with the quality of Reagan’s doodles. Check out a few below that he sketched at the 1981 G8 Summit. Have a look at another page here. 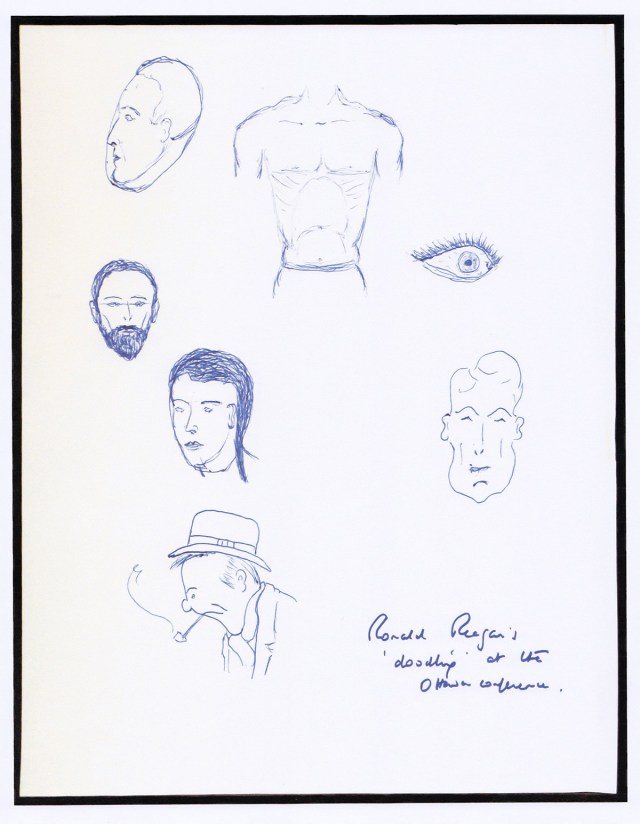 Doodles drawn by Reagan during the 1981 G8 Summit. (Rex Features via AP Images)

Franklin D. Roosevelt: A noted hobbyist, FDR loved to doodle on his pastimes, which included fishing, stamp collecting, and genealogy. Take a look at some examples from the book Presidential Doodlers here.

Dwight D. Eisenhower: Ike was not only a five-star general in the U.S. Army, but he was also a five-star doodler as you can see from the drawings below.  Presidential letterhead seemed to be his favorite medium. The second of the two doodles was executed on a sheet detailing four morning meetings in 1960. Our guess is that they were drawn during said meetings, but only the president would know for sure, right?

One of Ike’s doodles (Handout) 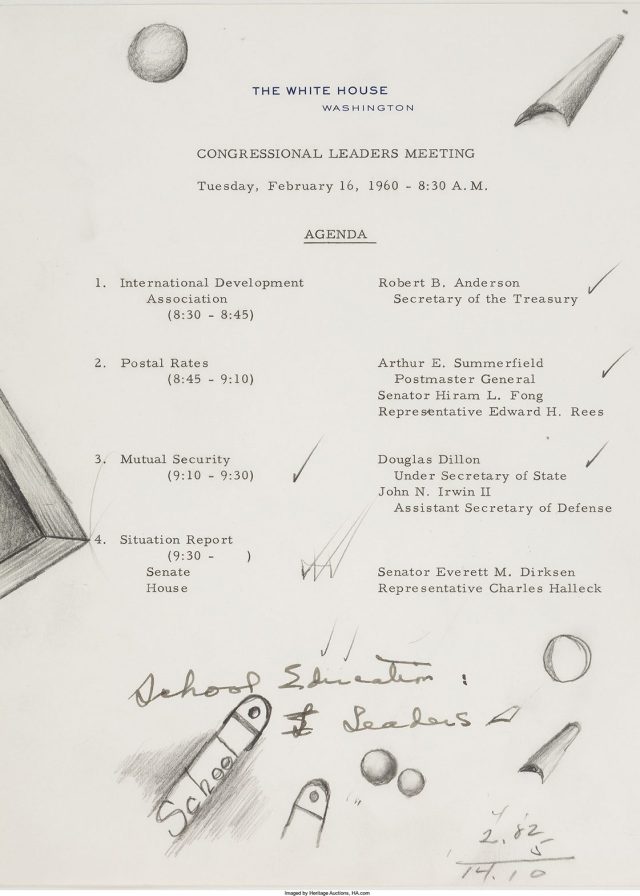 As luck would have it, you can buy that second sheet of Eisenhower’s doodles, which is set for a Feb. 17 auction at Heritage. For more info on the piece, click here.

A Definitive Guide to the 13 Most Haunted Hotels in the US
“Andor” Is a “Star Wars” Story That Finally Gives the Foot Soldiers Their Due
"God's Creatures" Directors on Bringing the Sexual Assault Story to Life
Remembering Loretta Lynn, Who Brought Resilience and Realism to Country Music
Review: Enter Cerasuolo, a Cozy Rosé Suited for Fall
Before All the Buzzy Electrified Sports Cars, There Was the Honda J-VX
The 12 Best Lug Sole Loafers to Diversify Your Fall Footwear Rotation
18 Amazing Style Deals to Score From the Stellar Everlane Sale Section
10 Women’s Bag Brands Every Guy Should Know