Devonta Freeman #24 of the Atlanta Falcons reacts after scoring a touchdown against the New Orleans Saints at the Mercedes-Benz Superdome on September 26, 2016 in New Orleans, Louisiana. (Chris Graythen/Getty Images)
By Matthew Reitman 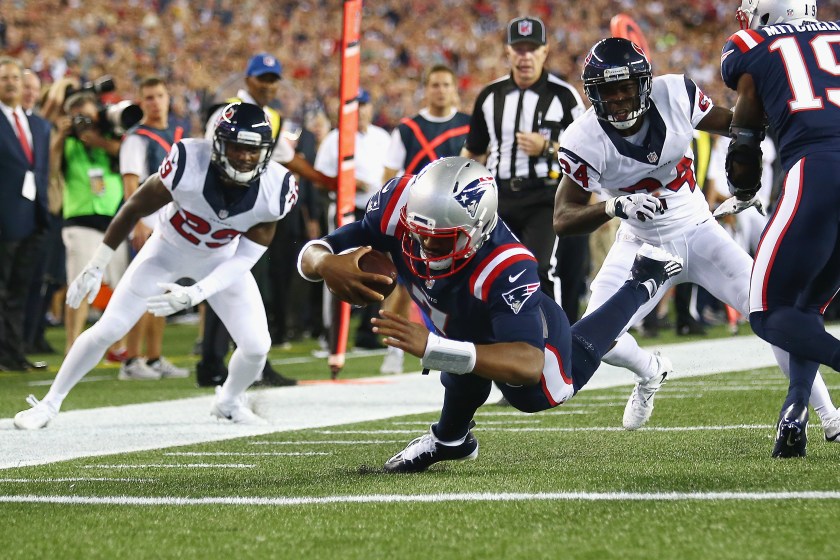 Jacoby Brissett #7 of the New England Patriots dives for a touchdown during the first quarter against the Houston Texans at Gillette Stadium on September 22, 2016, in Foxboro, Massachusetts. (Adam Glanzman/Getty Images)
Getty Images

The Patriots, down to their third-string quarterback, Jacoby Brissett, started the third week of the NFL season on Thursday with an impressive shutout win over the Houston Texans. Now 3-0, New England is once again in a QB bind this week after an injury sidelined Brissett. 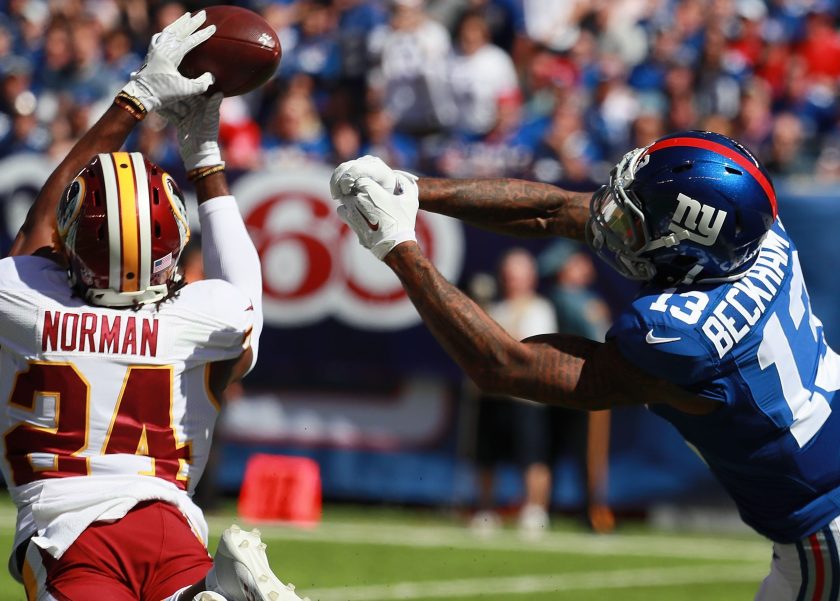 Josh Norman #24 of the Washington Redskins breaks up a pass to Odell Beckham #13 of the New York Giants at MetLife Stadium on September 25, 2016, in East Rutherford, New Jersey. (Michael Reaves/Getty Images)

The much-anticipated matchup between Redskins cornerback Josh Norman and Giants wide receiver Odell Beckham, Jr., remained relatively drama-free compared to their bout last year. Penalties and turnovers plagued New York, allowing Washington their first win. The Eagles, on the other hand, proved their worth yet again, this time against the Steelers. Rookie quarterback Carson Wentz continues to demonstrate leadership and poise under center, throwing for five touchdowns with zero interceptions this season.

On the other side of the interception coin, the Chief’s defense picked off Jets quarterback Ryan Fitzpatrick six times (including this pick-six) to give Kansas City its second win of the season. The Vikings defense also steamrolled their opponent, the Panthers, snapping their 14-game home winning streak. 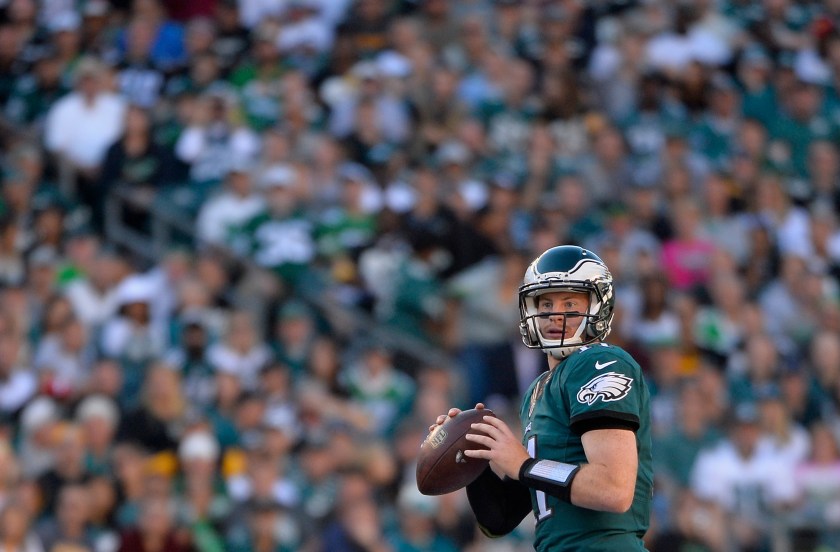 Quarterback Carson Wentz #11 of the Philadelphia Eagles looks to pass against the Pittsburgh Steelers in the second quarter at Lincoln Financial Field on September 25, 2016, in Philadelphia, Pennsylvania. (Alex Goodlett/Getty Images)
Getty Images 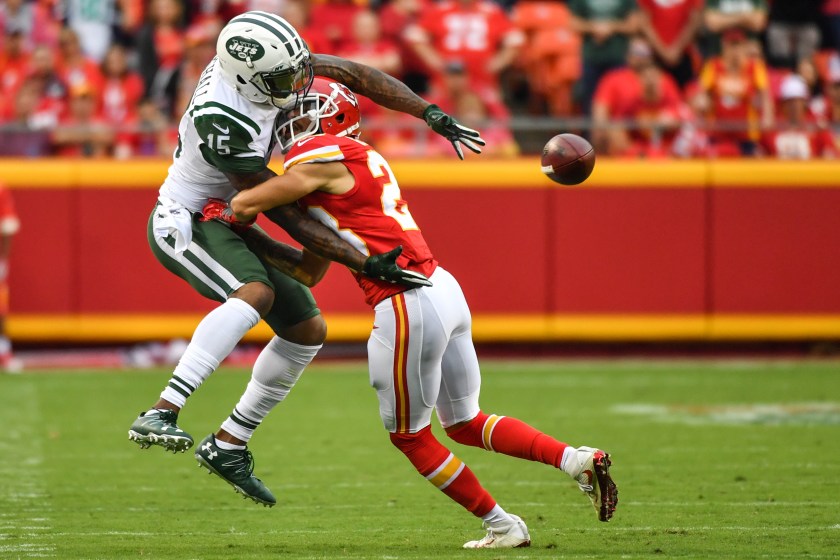 Wide receiver Brandon Marshall #15 of the New York Jets tries to make a catch through cornerback Phillip Gaines #23 of the Kansas City Chiefs at Arrowhead Stadium during the fourth quarter of the game on September 25, 2016, in Kansas City, Missouri. (Peter Aiken/Getty Images)
Getty Images 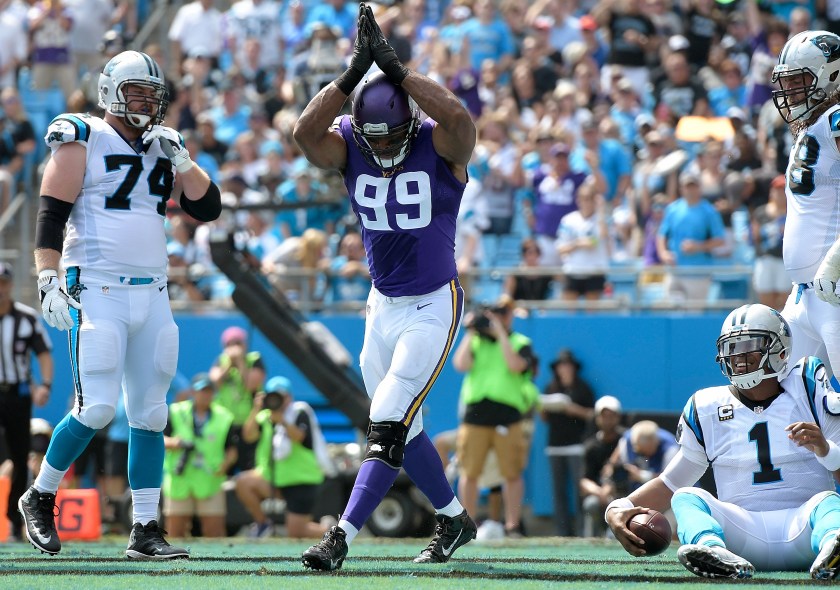 Danielle Hunter #99 of the Minnesota Vikings reacts after sacking Cam Newton #1 of the Carolina Panthers for a safety during the game at Bank of America Stadium on September 25, 2016, in Charlotte, North Carolina. (Grant Halverson/Getty Images)
Getty Images

The Dolphins notched their first win this year against the Browns, despite a multi-pronged effort by Terrelle Pryor Sr., who played quarterback, wide receiver, and safety. The Rams, Ravens, and Raiders all earned unlikely wins over their opponents.

The Broncos improved to 3-0 with a stellar performance from rookie QB Trevor Siemian, throwing for 312 yards in his first start on the road. Former-MVP Aaron Rodgers also had a great game, notching four touchdowns in Green Bay’s win over Detroit. 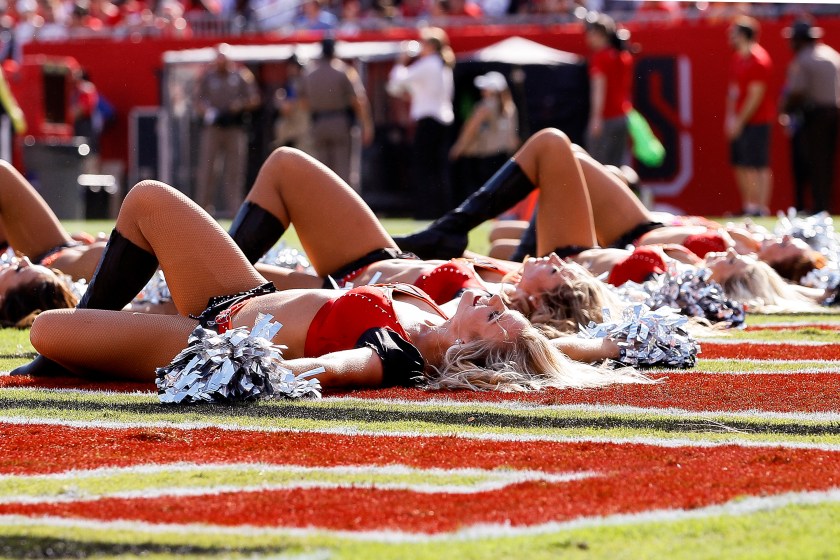 Cheerleaders of the Tampa Bay Buccaneers performs during the game against the Los Angeles Rams at Raymond James Stadium on September 25, 2016, in Tampa, Florida. The Rams defeated the Buccaneers 37 to 32. (Don Juan Moore/Getty Images)
Getty Images 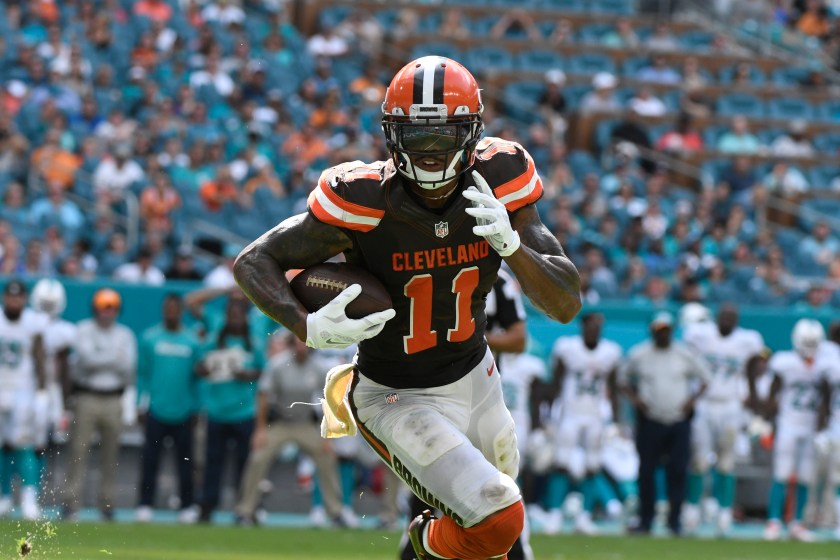 Terrelle Pryor #11 of the Cleveland Browns rushes for a touchdown in the 4th quarter against the Miami Dolphins on September 25, 2016, in Miami Gardens, Florida. (Eric Espada/Getty Images)
Getty Images 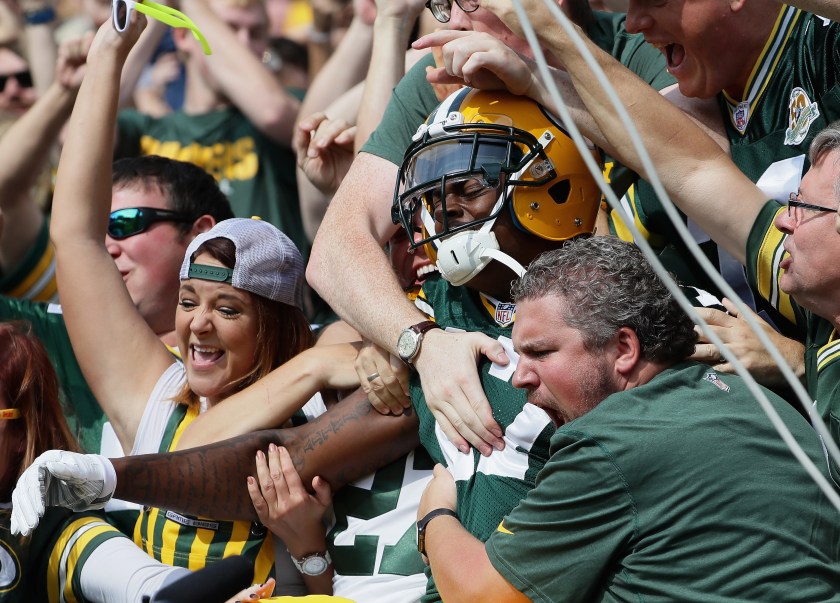 Davante Adams #17 of the Green Bay Packers is grabbed by fans after a “Lambeau Leap” following his touchdown catch in the first quarter against the Detroit Lions at Lambeau Field on September 25, 2016, in Green Bay, Wisconsin. (Jonathan Daniel/Getty Images)
Getty Images 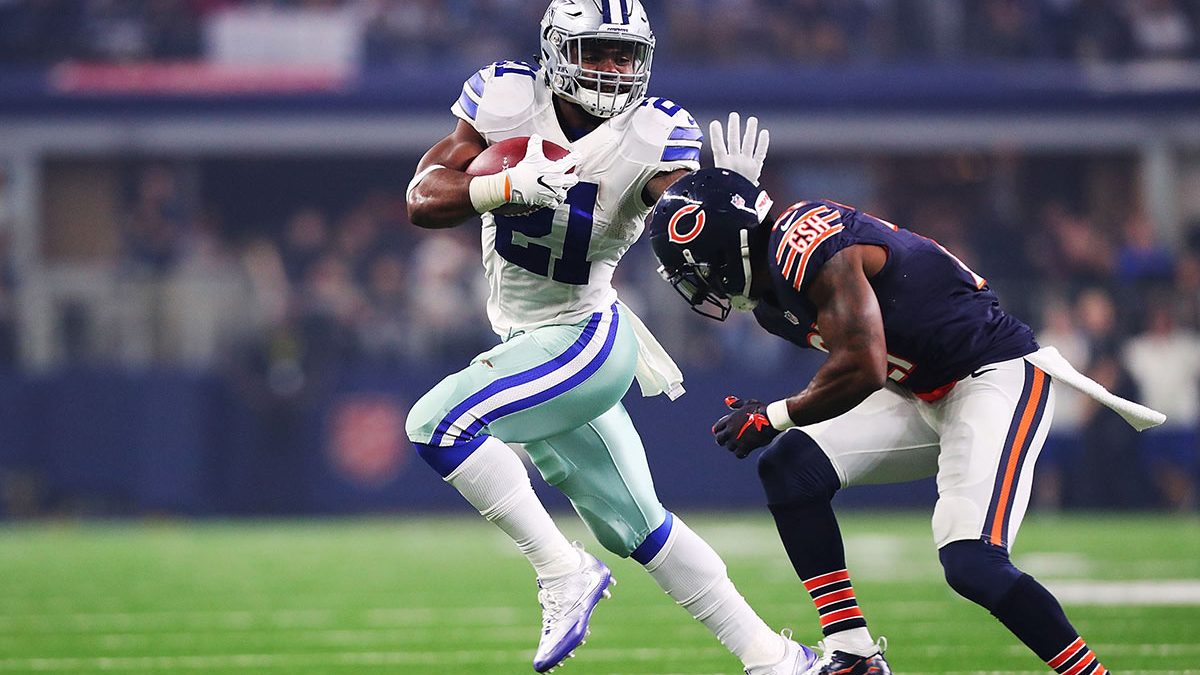 The Cowboys, buoyed by Ezekiel Elliott’s 100+ yard game, trumped the Bears for an easy win on Sunday night.

Despite little production from star wide receiver Julio Jones, The Atlanta Falcons demonstrated how effective their offense could still be in their 45-32 win over the Saints on Monday night in New Orleans. While most were tuned in to the presidential debate, quarterback Matt Ryan and the Falcons’ running backs Tevin Coleman and Devonta Freeman put on a show, tallying 442 yards and five touchdowns collectively. 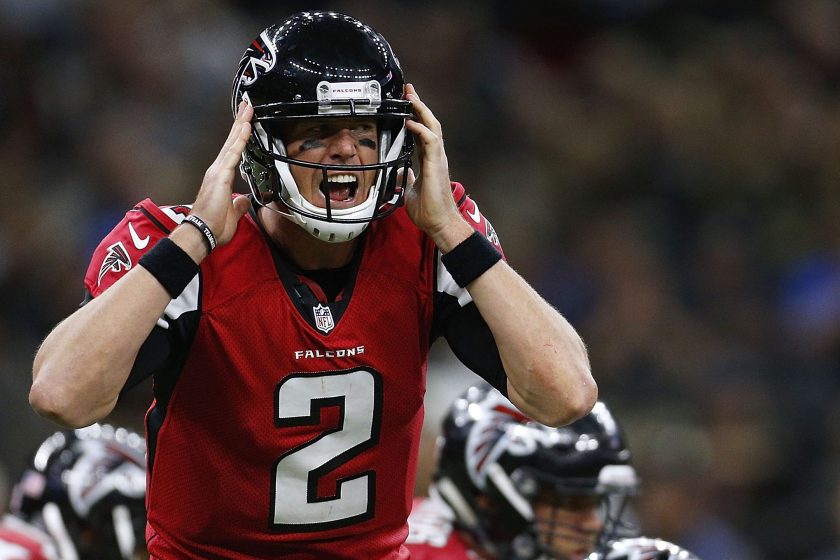 Matt Ryan #2 of the Atlanta Falcons reacts at the line of scrimmage during the second half of a game against the New Orleans Saints at the Mercedes-Benz Superdome on September 26, 2016, in New Orleans, Louisiana. (Jonathan Bachman/Getty Images) 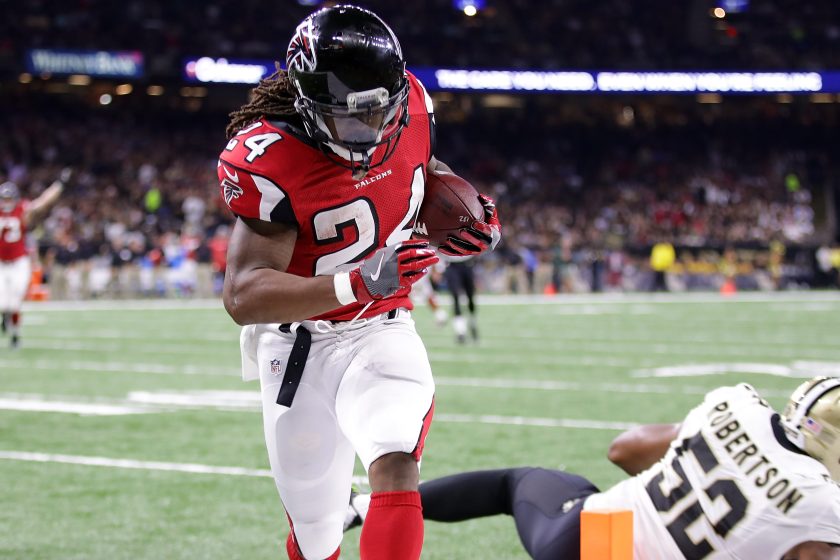 Devonta Freeman #24 of the Atlanta Falcons reacts after scoring a touchdown against the New Orleans Saints at the Mercedes-Benz Superdome on September 26, 2016, in New Orleans, Louisiana. (Chris Graythen/Getty Images)