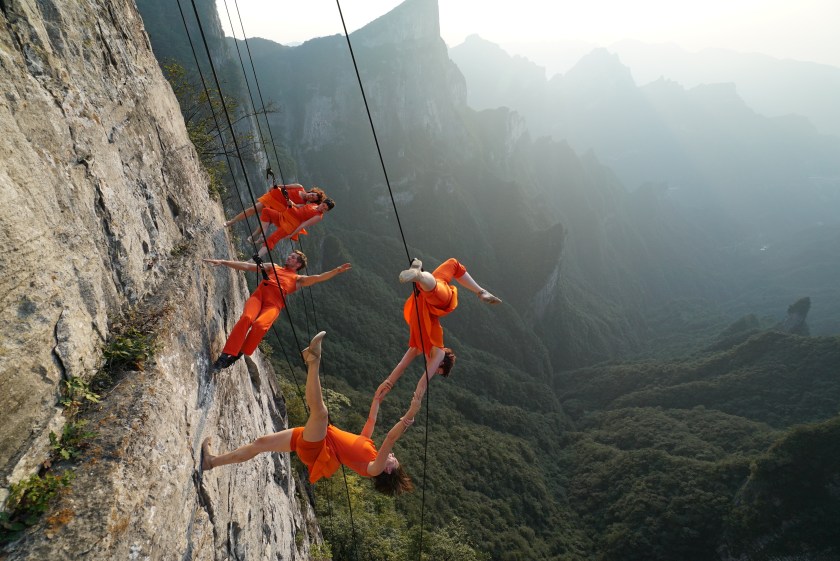 Dancers from the Bandaloop dance troupe hang from the plank road on Guigu Cliff to perform the ‘vertical dance’ in the air at Tianmenshan National Forest Park on September 12, 2016, in Zhangjiajie, Hunan Province, China. (Basil Tsimoyanis/VCG)
VCG via Getty Images

It’s Cirque du Soleil meets Inception. Bandaloop is an American dance troupe that merges two worlds that rarely intersect: rock climbing and choreographed dance. For the last 25 years, the dance troupe has been blending the beauty of intricate choreography and physicality of mountaineering.

Based out of the San Francisco Bay Area, Amelia Rudolph founded Bandaloop as a way of taking creative expression outdoors. In essence, the troupe is no different than any other. The only exception is that their dance floor is vertical. By bringing the two worlds together in the mountains or on buildings, the company is able to operate in ways that activate those spaces in a unique manner.

Bandaloop uses its perspective-shifting performances to fulfill its mission by “[reaching] audiences—including those not familiar with dance—and [inspiring] them to examine their perspectives on dance, community, and artistic expression,” the group said in a statement.

Randolph’s dance troupe not only performs in San Francisco, but also does 15-30 touring performances around the world each year. Bandaloop has performed on architectural landmarks, skyscrapers, and cliff sides in places like Sao Paulo, Brazil; Mumbai, India; Seoul, South Korea; Muscat, Oman; Lison, France; and Soweto, South Africa. As part of a sponsored State Department tour, they danced on the side of the Golcara Fort in Hyderaba, India, and the Grand Cathedral in Puebla, Mexico. The dance troupe has performed for almost 1 million people in at least 17 different countries around the world.

To make dancing feel accessible, audience demographics are intentionally diverse. Bandaloop publicly performs for just about everyone from the average passerby and families to dance aficionados and rock climbers.

In addition to performing, the dance troupe trains dancers and youngsters, as well as hosting training sessions on the road since outreach is intrinsic to engaging with communities. Bandaloop also offers regulars classes and camps at its studio and in the mountains. The dance company furthermore has an ongoing collaboration with Destiny Arts where it teaches youth in Oakland, California.