Napa Valley is full of architectural wonders from different eras 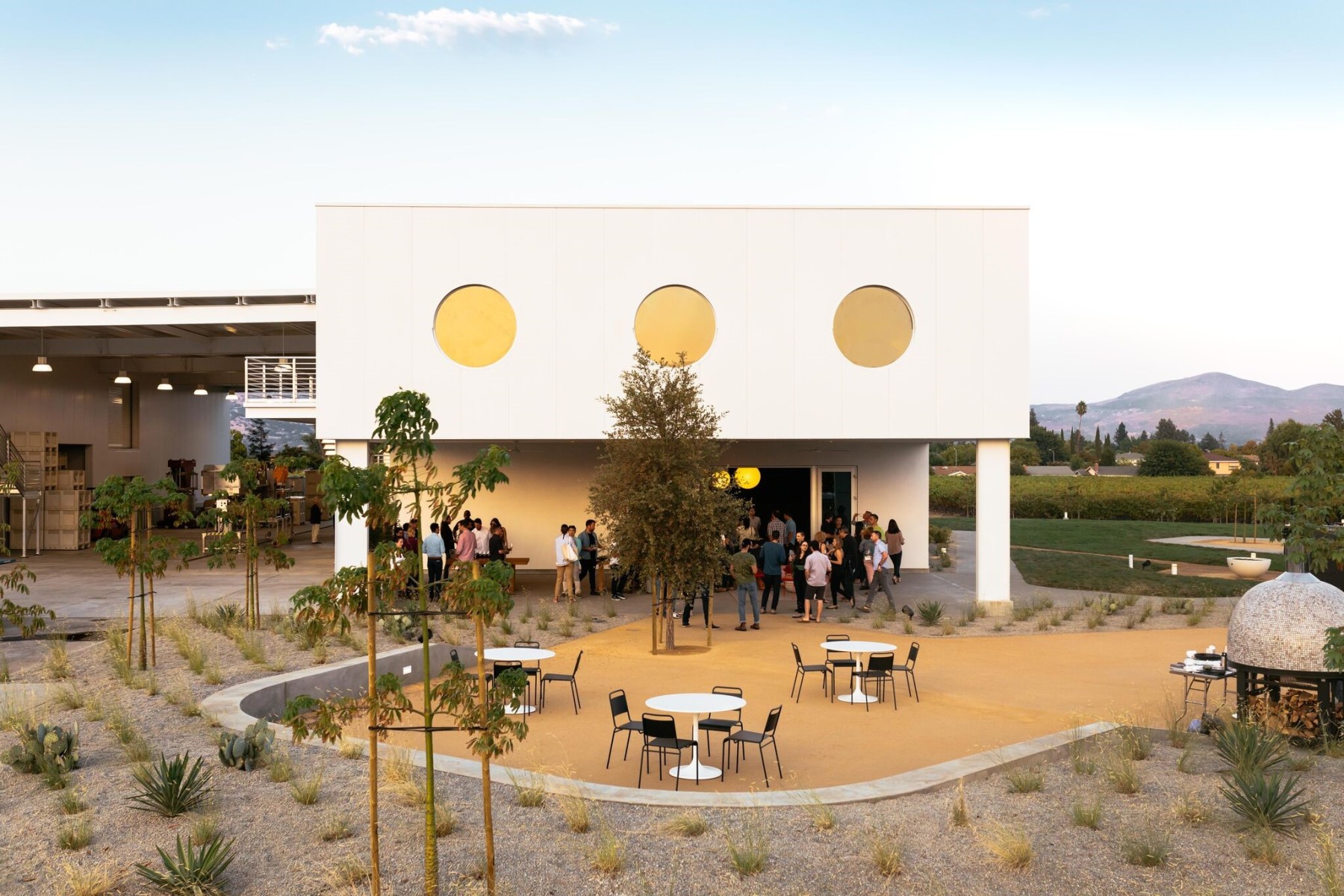 I started my day in Napa Valley riding on something called the Wine Trolley. It’s not the wine train; that’s an actual train that takes people to various wineries throughout the area. It’s also not a van or a car, but something that is decked out to look sort of like an old-timey locomotive on four wheels that can cruise the streets of Napa Valley, but, as I’m told, can’t really make it up any mountains. At some point between point A and point B, I accidentally did the closest thing I could to imitating Rihanna, and took my glass of Rosé with me even though I’m pretty sure I wasn’t supposed to, finishing it off as we cruised down the street.

The wine and glassware I accidentally stole was from the 2.0 version of the Louis M. Martini winery in St. Helena off of the Saint Helena Hwy. The new version of the winery that its namesake first opened in 1933 is stunning. Designed by Howard Backen, the sprawling cathedral to Cabernet Sauvignon looks just like that: a place of worship. From the minute you walk through the massive — I’m guessing 20-foot-tall — wooden doors, to when you find yourself walking around the darkened cellar, there’s something ancient about the place even though its design is distinctly modern and it opened this past March.

The winery is just another reason that Napa Valley, a place known for its Cabernet, is one of the truly great design destinations in the West. Along with other parts of the region, from the midcentury signs and buildings in Tucson to the Southwestern-style adobes in Taos, it is one of those places you might not think of as a design wonderland, but it is. Unlike its regional counterparts, however, there’s not one unifying school that dominates throughout.

Take, for instance, the first place I noticed on our way to the Louis M. Martini winery on the Wine Trolly: the cool, Streamline Moderne post office not too far down the road. Built in 1940 and looking like something a bad guy in a Dashiell Hammett noir might stop by on the weekend to mail a ransom note, it’s a perfect example of New Deal-era architecture, complete with a mural of grape pickers in the hot California sun. In the late-1990s, a new mural was added, featuring migrant laborers, an acknowledgement of the people who tend to do all the hard, painstaking work in the modern era. Not too far from the post office is Gott’s. While the roadside chain serves the best burgers in the area, the building goes back further than the restaurant’s founding in 1999, to a time before drive-thrus, when parking your car and having somebody walk up to your window was the way you ordered, or you actually got out of your car and ate with your family at a table.

I’m told the burgers are delicious, but they’re for another time. My stop at the Louis M. Martini Winery is a full-service one that includes a fresh pizza with duck and Meyer lemon and various snacks inside the newly built temple to the vine. And while it’s easy to throw around theological terms to describe the experience of drinking wine in Napa, the Louis M. Martini winery does indeed feel like a place where you go to worship the grape, with its massive wooden doors that greet you to the 30-foot-high glass walls. It’s welcoming, but it only takes a glass or two to feel like you’re having a religious experience, or something akin to it.

The next stop on the trolley is the Long Meadow Ranch’s Mayacamas Estate, which is one of the many places in the area that look like literal paradise, with sprawling views of valleys and mountains. The estate has been around since 1872, but the winery and tasting room built in 1989 by William Turnbull using materials indigenous to the site on a long-neglected plot of land, is a masterpiece where you can drink wine and try the ranch’s olive oil. Like the Louis M. Martini winery, it is large and imposing, but it looks more influenced by the area’s native cultures more than modern design. Its nearby restaurant, housed in an old nursery barn from the 1800s, has been lovingly kept up and feels similarly like a California from another time. That’s the one thing that ties various Napa wineries together: the connection to the past. Every place I visit celebrates what came before in a different way.

Take, for instance, Stony Hill, also in St. Helena. Built in the 1940s by Fred and Eleanor McCrea, it’s by no means a large property compared to some of the other wineries in the area. It is, however, a perfect balance of rustic and modern — modern in the middle-of-the-20th century sense, that is. The winery has a spaniel named Nate chasing lizards and basking in the sun, but it also has the McCreas’ house still standing, a mid-century modern Ranch home that, thankfully, hasn’t changed much since it was built during the Truman administration. Kept up, yes; but the house itself looks like something straight out of a Julius Sherman photo. Timeless and elegant, effortlessly hip against a bucolic backdrop.

Although I’m not sure if the Wine Trolley will take you there or not, if you can get a ride from Stony Hill about 30 minutes south to Ashes and Diamonds Winery, with its big portholes, slanting roofs and structures painted yellow, white and taupe, it’s another must. A newer winery designed by the Los Angeles-based architect Barbara Bestor, it feels like a place characters out of a Joan Didion or Eve Babitz book might hang out drinking Cabernet Sauvignon all day. It’s also one of the few spots friends of mine who live in Oakland and friends who are in Silver Lake have both suggested, a rare bridge between the sensibilities of northern and southern California.

The other thing these places all have in common is they all have the type of views that really deserve a panorama shot with your phone, but none of them match architectural wonder with breathtaking view quite like Artesa Vineyards & Winery in Napa. Designed and built in 1991 by the Barcelona architect Domingo Triay, the postmodern winery fits perfectly into the landscape, while the view, after you walk up a few steps, is absolutely one of the best in the region in every direction. While a seat inside at the bar sipping on reds and rosé also does the trick. The vibe is welcoming and fun, casual and cool; it’s exactly what so many of us that visit California want it to be, and something that Napa Valley, with all its wine and design, excels at like no other place.