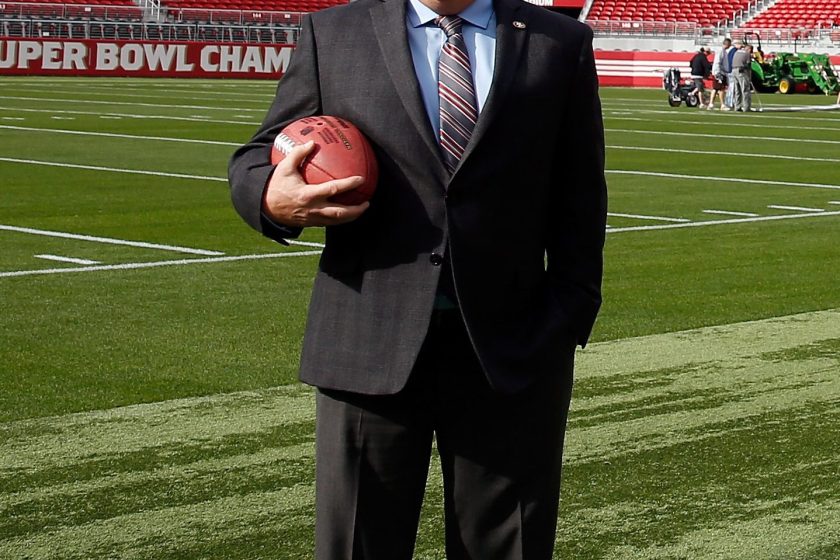 Chip Kelly stands on the field after a press conference where he was announced as the new head coach of the San Francisco 49ers at Levi’s Stadium on January 20, 2016 in Santa Clara, California. (Ezra Shaw/Getty Images)

On Sunday, Chip Kelly will start Colin Kaepernick, currently the NFL’s most controversial player, at quarterback when his team faces the Buffalo Bills. But with weeks of discussion swirling around a player who wasn’t even in the lineup until this week, the 49ers head coach remained unflappable. When it comes to general craziness, this isn’t Chip Kelly’s first rodeo.

The head coach has been in the hot seat before in Philadelphia, remaining stoic even when fired after a season of brutal losses and dissension. (He’s also now had to watch as his former team’s off to an unexpectedly strong start behind rookie sensation Carson Wentz.) That’s because Kelly is focused on one thing: his vision. Fast-paced and run-heavy, his offensive style favors downhill running backs and mobile quarterbacks (see video below).

As a result, players under Kelly’s tutelage need endurance. To ensure they’re tapping into their full athletic potential, his players are often the subjects of tests for peak physiological performance—a gripe for many undergoing them. Indeed, Kelly hired a sports science expert for the Eagles—he was the first NFL coach to do so, but many teams have since followed suit.

In a Washington Post profile on the playcaller, Kent Babb writes:

“Kelly backed up his methods with science and commitment, but what some saw as a revolution, others saw as misguided. One NFL player compared Kelly with Elon Musk; another referred to the coach’s methods as ‘Orwellian.’ Regardless, each day players were greeted at the team facility by screens revealing who had completed the morning routine — an iPad soreness and mood survey, the results of a heart-rate monitor, and of course the urine test — showing players’ head shots and a background that turned green when the daily assessment was completed.”

After winning the divisional title his first year and finishing 10-6 in both of his first two seasons, Kelly was given the additional role of general manager of the Eagles in 2015. Allowing him full control of the roster would make his final season in Philadelphia a turbulent one. 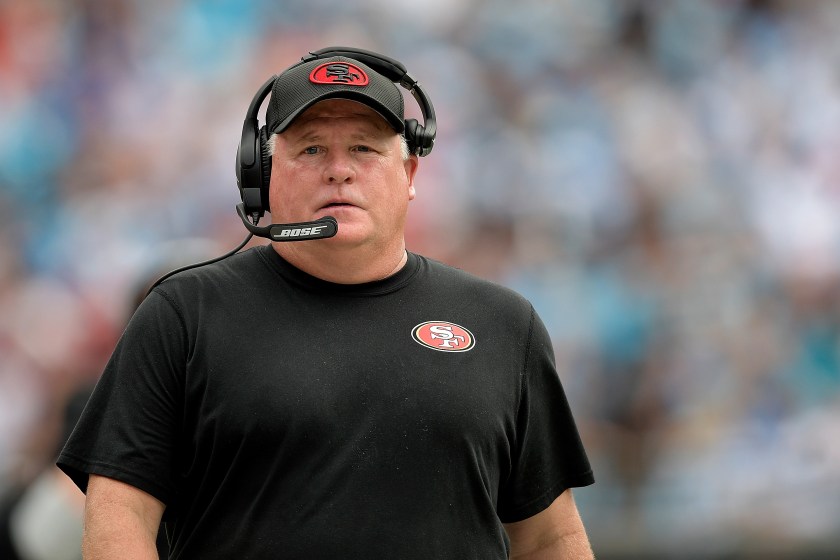 Head coach Chip Kelly of the San Francisco 49ers watches his team during the game against the Carolina Panthers at Bank of America Stadium on September 18, 2016 in Charlotte, North Carolina. (Grant Halverson/Getty Images)
Getty Images

Finally given the keys to his kingdom, Kelly spent much of the offseason restructuring the Eagles roster to support his fast-paced offensive vision, which required dramatic changes. He was willing to abandon veterans: the players cut had a combined eight Pro Bowl appearances. Perhaps worst of all in the eyes of many fans, the new GM let LeSean McCoy go, even though he led the league in rushing yards in 2013 and became the Eagles all-time leading rusher the next season. After being replaced by DeMarco Murray, McCoy made inflammatory comments about Kelly “cutting all the good black players,” which, when combined with other players’ complaints of the martial culture perpetuated by Kelly, ensured it would be a season in the crosshairs.

Kelly went from being hailed a visionary and a genius to being labeled a fluke and a likely racist. His focus on urine tests, his dogged determination to assemble his vision of an Eagles roster, and his frankly bizarre quirks like blaring Ricky Martin songs during team warmups all added to locker room tension. Even worse, Kelly’s gamble with DeMarco Murray didn’t pay off. Murray finished the season with only 702 rushing yards, his lowest output since 2012. Coupled with Philadelphia’s plummet to a 7-9 record for the 2015 season, it was no surprise Kelly was fired… only to be quickly signed by the 49ers in January.

Those who know Kelly argue he’s misunderstood. The quirky traits are often the only aspects of his personality that get reported because, given how private the man is, few positive personal anecdotes are available. Also, Kelly’s priorities are different than most NFL coaches, and because of that, reporters like Jason Whitlock (or Jay Glazer, as shown in the video below), simply think he’s unaware of how that difference is perceived.

Now, with Kaepernick at the helm of a sputtering offense, Kelly is in a familiar position. It’s likely that Kelly won’t say much on the National Anthem controversy with his new starting QB: he has enough on his plate just worrying about about their offense. The best defensive minds in the NFL have clearly found the special ingredient for the offensive visionary’s magic recipe: stopping the run. And there’s no guarantee Kelly will get it started any time soon. 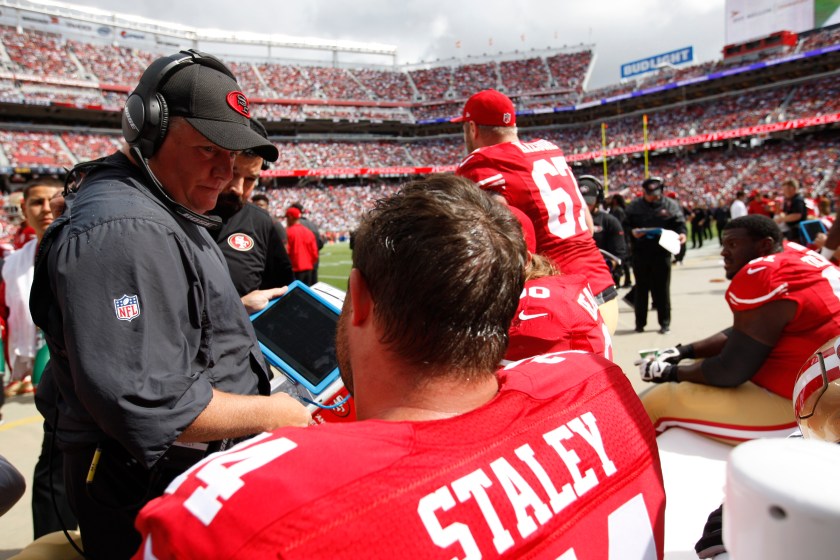 Head Coach Chip Kelly of the San Francisco 49ers talks with Joe Staley #74 on the sideline during the game against the Dallas Cowboys at Levi Stadium on October 2, 2016 in Santa Clara, California. The Cowboys defeated the 49ers 24-17. (Michael Zagaris/San Francisco 49ers/Getty Images)
Getty Images

The Ringer’s Chris Brown has hope the head coach will adapt, since he’ll probably get fired by the 49ers if he doesn’t. Brown writes:

“Kelly is a smart coach in a sport where those are in short supply, and, in his first press conference as 49ers head coach, he hinted at introspection when he said he was performing an ‘autopsy’ on what exactly went wrong during his Eagles tenure.”

Perhaps the results of that autopsy haven’t come back yet, since his team is 1-4. Maybe Kaepernick, whose mobility out of the pocket led his team to a Super Bowl, is the missing link in Kelly’s San Francisco offense. Sunday’s trial run with Kaepernick under center will be a good litmus test to see if the Chip Kelly vision is feasible for the 49ers or if it will just mean that the former Oregon coach’s second stop in the NFL is a brief one too.