From a rock climbing harness to the scuba diving suit, how did we get here? 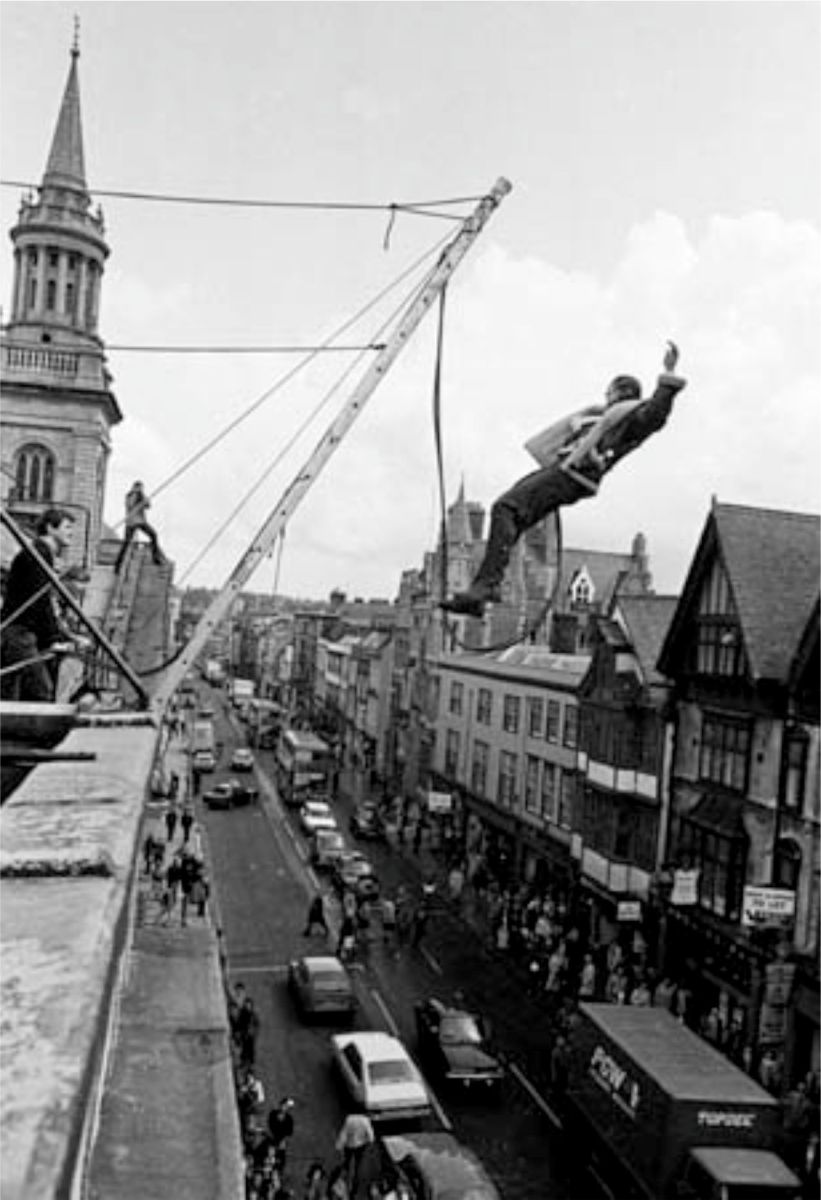 Thanks to modern technology, humans can try out a wide variety of adventure sports without being too worried about their safety. We can climb massive mountains, ski down terrifying slopes, and even go beneath the depths of the ocean or deep into space. But where did all this equipment start? The first scuba diving suit probably looked nothing like what we are used to today. We examine the origins of the some of the equipment that lets us explore the world and live on the edge, like jumping out of perfectly good airplanes and making it to the ground with no trouble. 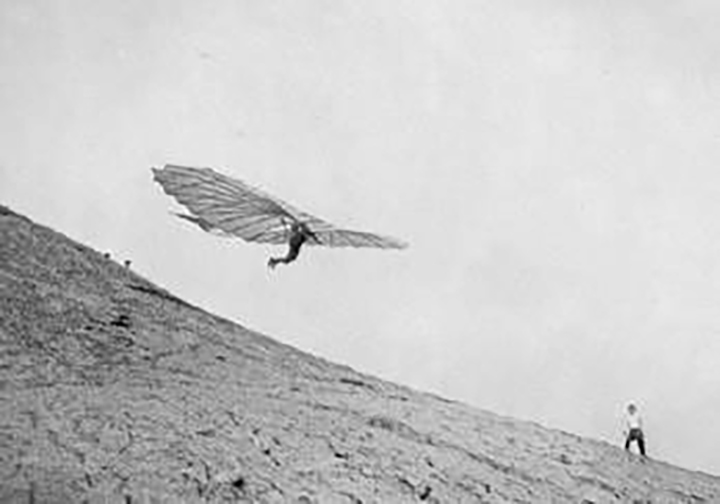 Engineer Otto Lilienthal, one of the forefathers of aviation. Germany, 1895. (Wikipedia)

The birth of hang gliding coincides with the birth of aviation itself. There are two types of hang gliders, flex wings and rigid wings. Rigid-wing gliders offer better aerodynamics than the flex-wing. During the end of the 19th century, Otto Lilienthal, a German engineer, made over 2,000 successful flights on weight shift hang gliders. But then the Wright brothers mastered powered flight, and hang gliders were largely forgotten. Until, that is, the late 1940s, when a NASA scientist, Dr. Francis Rogallo, became interested in hang gliding. Pictures of his trial runs were released and aviation enthusiasts latched on. By the late 1960s, many people were building their own bamboo and polyethylene hang gliders to jump off the nearest sand dune. 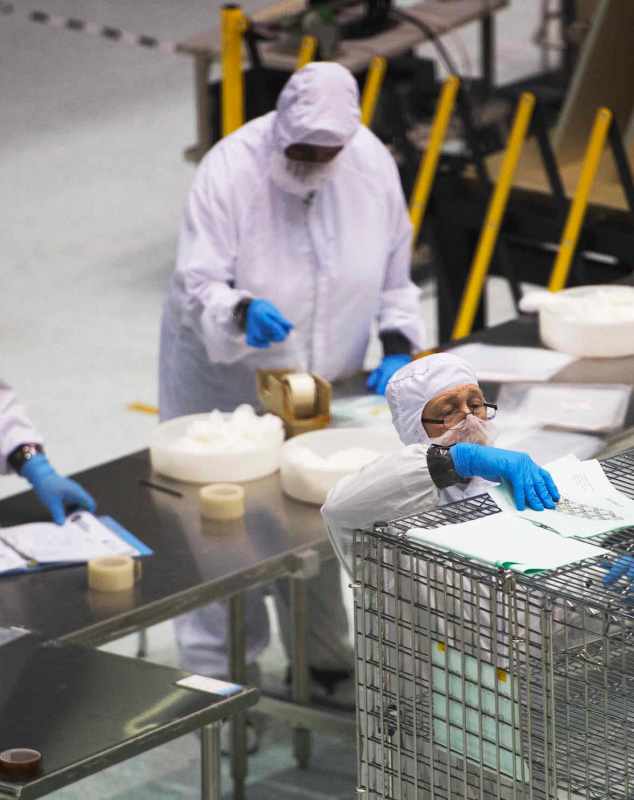 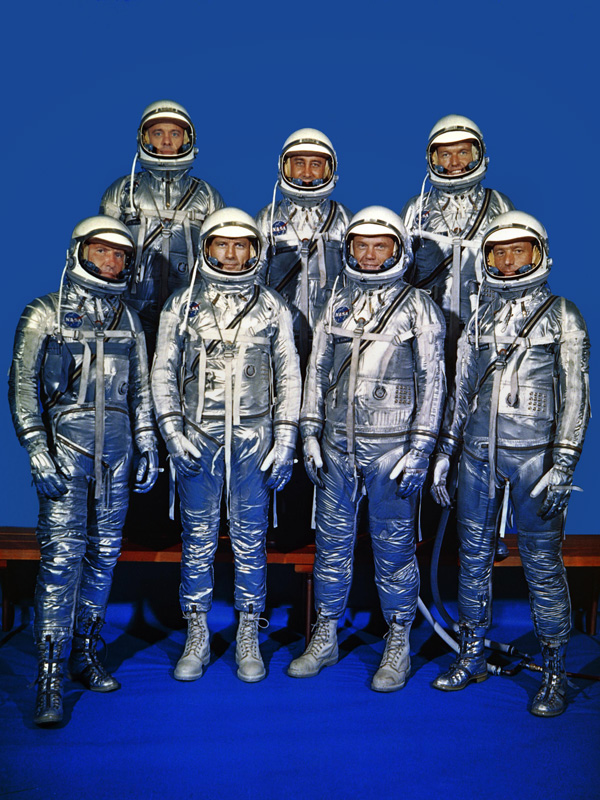 When NASA astronauts first flew into space during the Mercury program, the spacesuits, called Mercury suits, were only worn inside the spacecraft. But the first spacewalks took place during NASA’s second space program, Gemini, and the suits were much better than the Mercury suits. They connected to a spacecraft through a hose, and the astronaut breathed oxygen from the spacecraft that way. Then, the spacesuits for the Apollo program had to protect astronauts while walking on the moon, so the Apollo suits had boots that were made to walk on rocky ground. They also had built-in life support, so astronauts were no longer connected to the space station by a hose. NASA plans to send humans to places we’ve never been before, so they are working on new space suits. The new suits would let astronauts walk on rocky ground but will also make it easier for them to move, and be more protective against dust.

The first known diving helmet was created by Edmond Halley in the late 17th century. The bell-shaped helmet drew air from a larger bell, which was dropped into the ocean. Air trapped inside that large bell was fed to the diver through a tube. But the air supply needed to be replenished with air in barrels sent from the surface and juggled by the diver, so it was pretty hard to remain underwater.

Edmond Halley created the first-known diving helmet in the late 17th century, which was connected to a larger bell filled with air.

The first successful diving helmet was then created by brothers Charles and John Deane. It was made of copper and had a flexible collar and long leather hose, which supplied air via bellows. There was another short pipe that allowed the air to escape.

But Augustus Siebe produced the design that is considered the first functional suit. He created a helmet fitted to a full-length watertight diving suit. There was a valve in the helmet and the closed diving suit was connected to an air pump on the surface.

Augustus Siebe designed a helmet fitted to a full-length watertight diving suit. There was a valve in the helmet. The closed diving suit was connected to an air pump on the surface. This version is considered to be the very first functional suit.

In the early 1900s, diving suits and helmets were made of aluminum. In 1911, Chester E. Macduffee designed a 550 pound diving suit that was  actually successfully used at 213 feet. The suit was not watertight though, so it required a water pump to remove water from the leg sections.

Depiction of Birkebeiner skiers carrying Prince Haakon to safety during the winter of 1206 has become a national Norwegian icon. (Wikipedia)

Skis are incredibly old. Stone age hunters used them to follow reindeer and elk herds from central Asia. There are rock paintings and skis preserved in bogs that show they were used by hunters and trappers at least 5,000 years ago. They were also used regularly by Scandinavian farmers, hunters and warriors throughout the Middle Ages. Units of the Swedish Army trained and competed on skis in the 18th century. The first newspaper reference to an organized cross-country ski race is in 1843 in Tromso, Norway.

In the 1840s, Sondre Norheim created the heel strap by entwining shoots of the birch tree root. This provided the skier better steering and control, and even the ability to go off jumps. Norheim then popularized the first modern sidecut ski, the “Telemark ski,” in 1870, which set the pattern that remained for about a century. It was a narrow-waisted ski that helped facilitate turns in soft snow. In northern Finland and Sweden, asymmetrical skis were used up until the 1930s. 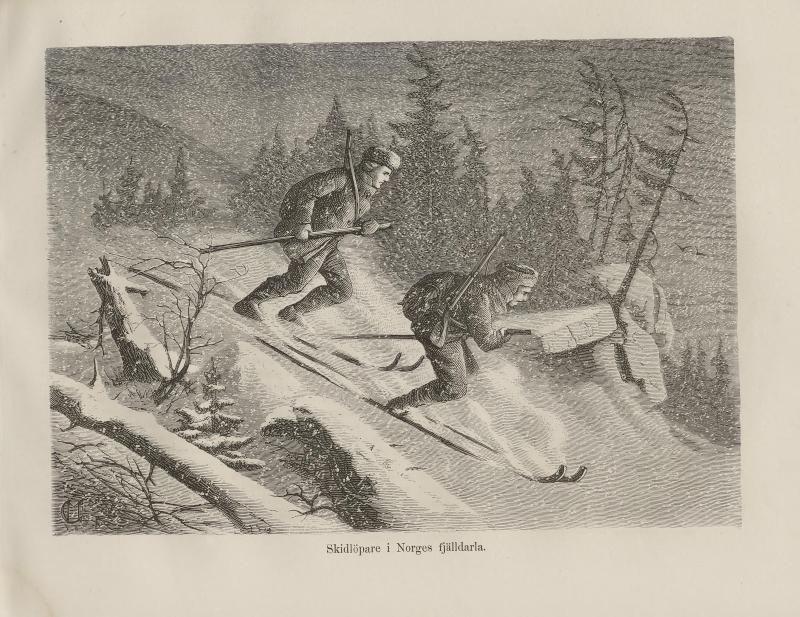 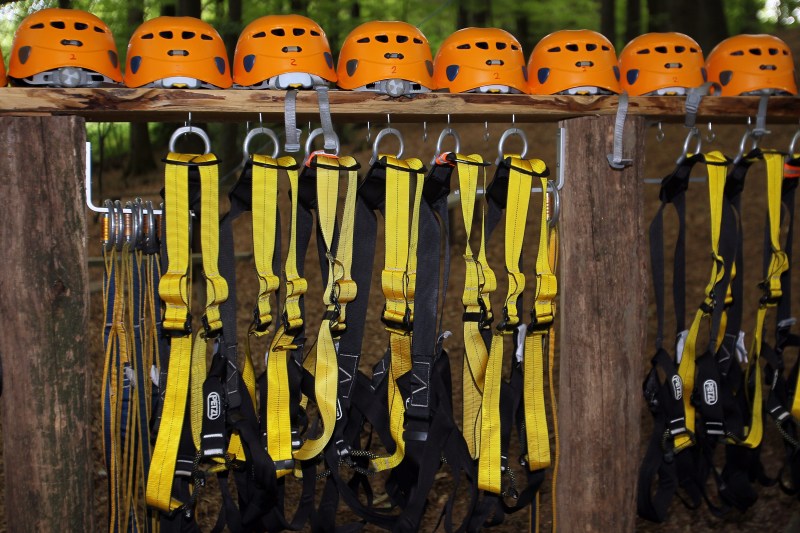 About fifty years ago, there was no such thing as a climbing harness. Americans used to wrap three loops around the waist and finish up with a bowline (ancient and simple knot). Europeans tied in with a loop or two around their chest. Then there was the sawmi belt, which was seventeen feet of one-inch tubular webbing wrapped around the waist and knotted. Any and all of these options could end in severe injury and even death if you fell while climbing, especially off overhangs. In comes Bill Forrest. He started climbing in 1959 and wanted to be the first to make an ascent of the east face of Arizona’s Baboquivari Peak, the most overhanging route in the country at the time. For two years, between 1964 and 1966, Forrest and his friend Gary Garbert tried four different times, and Forrest realized he needed a new harness. After a lot of different designs, Forrest made a harness that transferred the load to the thighs. It was a two-piece harness and made falling a lot less painful and a lot safer. Modern climbing harnesses still employ the same basic principle. 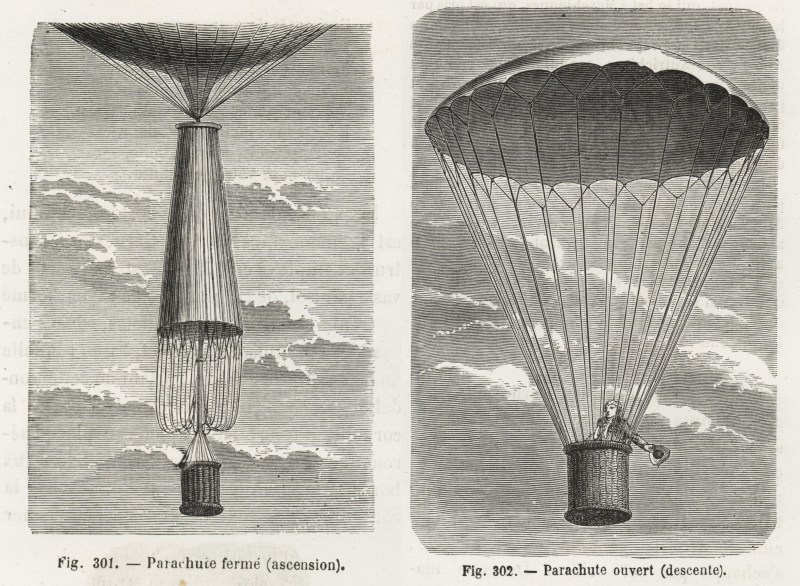 Andre-Jacques Garnerin and his parachute: closed for ascent beneath a balloon, and open for descent. (Marvels of Science: Air Balloons) (Florilegius/SSPL/Getty Images)
SSPL via Getty Images

Leonardo da Vinci actually sketched the first blueprints for a parachute. Then Louis-Sebastian Lenormand created a kind of parachute out of two umbrellas and jumped out of a tree in 1783. But Andre-Jacques Garnerin made the first successful parachute descent. He figured out that air resistance would slow an individual’s fall from a high altitude while a prisoner in the French Revolution. He never actually used a parachute while held in a Hungarian prison, but the idea stuck with him. In 1797, Garnerin completed his first parachute, a canvas canopy 23 feet in diameter and attached to a basket with suspension lines. He attached this to a hydrogen ballon and went up 3,200 feet. He got into the basket and cut the parachute from the balloon. He landed shaken but unhurt a half mile from the balloons takeoff site.

The history of bungee jumping actually goes back to Pentecost Island, Vanuatu, where citizens construct 75-foot-tall wooden towers and jump off them with elastic vines tied around their ankles. Legend has it, this started because a woman was being mistreated by her husband and so she ran away and climbed up the tallest banyan tree on the island, tied a vine around her ankle and jumped. The vine broke her fall. But when her husband followed, vineless, he died. The event has since been reconstructed. The islanders build a tower and then jump off it with vines tied around their ankles in order to prove their bravery and ward off evil spirits. This “land diving” is also supposed to bring a successful Yam harvest. Naturalist David Attenborough visited Pentecost Island with a BBC camera crew in 1950 and the world got its first few of land diving. 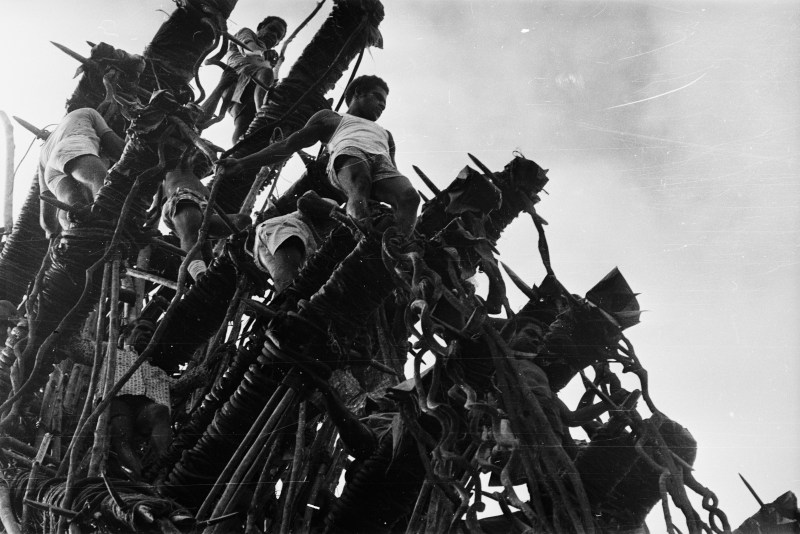 A group of young men prepare to perform a land dive from a bamboo platform during a visit by Queen Elizabeth and Prince Philip to Pentecost Island, Vanuatu, off the north-east coast of Australia. The modern sport of bungee jumping is thought to originate from this unique initiation rite. (McCabe/Express/Getty Images)
Getty Images

The first Western bungee jump occurred when members of the Oxford University Dangerous Sports Club climbed the Clifton Suspension Bridge in Bristol in 1979 and jumped while tied to elastic cords. They were arrested after. 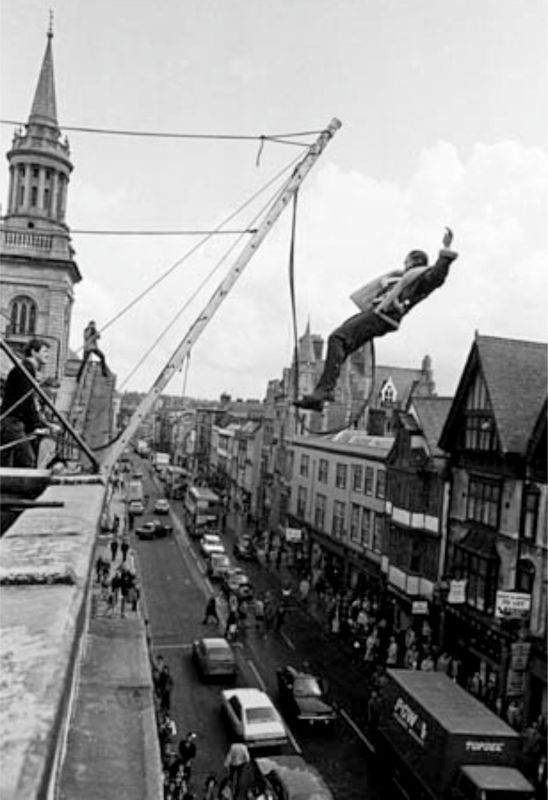