Snyder receiving one of his gold medals in Rio. (Joe Kusumoto)
By Will Levith

In September 2011, while on a U.S. Navy mission as an Explosive Ordinance Disposal (EOD) technician in Afghanistan—basically, Jeremy Renner’s character from The Hurt Locker—Lieutenant Brad Snyder stepped on an Improvised Explosive Device (IED).

What happened next couldn’t have ever been scripted by Hollywood (although they’re trying). “I thought that I had died,” Snyder tells RealClearLife. “I still could just barely see out of my left eye, and I looked down and saw my hands and legs, and I didn’t see any blood or damage, and that led me to believe that I had died. I was just waiting to pass over or whatever happens after you die.” 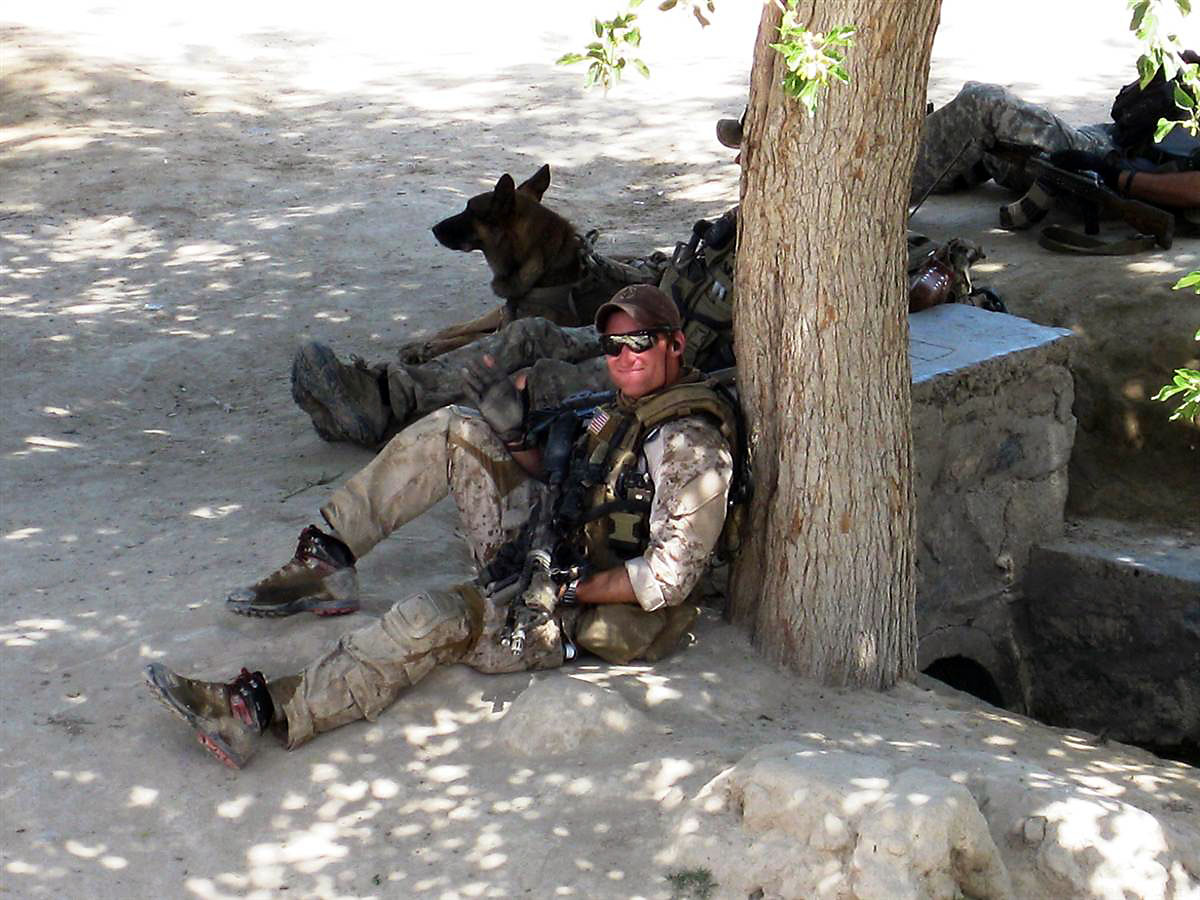 In fact, Snyder had miraculously survived the bomb blast, but his left eye would soon join his right in perpetual darkness. An unflagging optimist, Snyder tells RealClearLife that “To be able to come back was really great for me. The bad news was that I was blind, but really, I was just happy to be alive.”

That’s right; Lt. Snyder came back, and man, has he made the most of his second chance.

Growing up on the Gulf Coast of Florida in St. Petersburg, Snyder says he knew from an early age that he was a better-than-average swimmer. That led him to swim competitively for his high school swim team and eventually, the U.S. Naval Academy. “Competitive swimming was where I first learned the real value of virtue, what it meant to be dedicated to something, [and] how hard work can pay off,” he says. He would end up serving as captain of the academy’s swim team—and finding a related calling within the ranks of the Navy.

A practical dolphin with an affinity for scuba diving by the time he graduated in 2006, Snyder had originally wanted in on the Navy’s dive and salvage team, but was told by his superiors that that work was more fitted to general enlistees, not newly minted naval officers. So he had a choice: become a Navy SEAL or join the EOD community. While initially dabbling in the SEALs, he eventually “fell in love with” EOD, which he talks about with the vim and vigor that a high-end car collector might of his prized garage. “A bomb could either be a mine in the Strait of Hormuz, [or] a backpack bomb at the ’96 Olympics, or an IED in Afghanistan,” he explains. The position requires someone who’s been trained in the intricacies of “[taking] apart every bomb you can imagine, from a hand grenade to a landmine to a nuclear weapon to chemical and biological weapons,” he tells us. That training was followed by a deployment to Iraq in ’08-’09, and then he was added to a Special Operations detail in Afghanistan. It was with that team that Snyder had his brush with fate.

If you were to describe Snyder’s life since 2011, it’s more Cathedral than Scent of a Woman; he is a veritable font of wisdom, intelligence, courtesy, and hope, not dramatic displays of self-pity à la Al Pacino. The 33-year-old tells RealClearLife that he spent five months in rehab, and without so much as a stutter in his voice, recalls one of the most disturbing and frustrating aspects of his hospital stay. “I had very vivid dreams,” he remembers. “I vividly imagined my mom and my sister and my family, and I’m at the beach with them and I see the waves and the sky and the palm trees—it’s so real in your dreams—and then I wake up, and it’s all dark.” What kept him going, he says, was knowing that many of his “brothers” whom he’d trained with didn’t return home from deployment. “I really thought that I owed it to them to make the most of what I had left,” he says. He never ran out of hope either. “I didn’t really lose the perspective that I was eventually going to be successful as a blind person, and thankfully, I was able to find a medium through which I could do that in the Paralympics.” 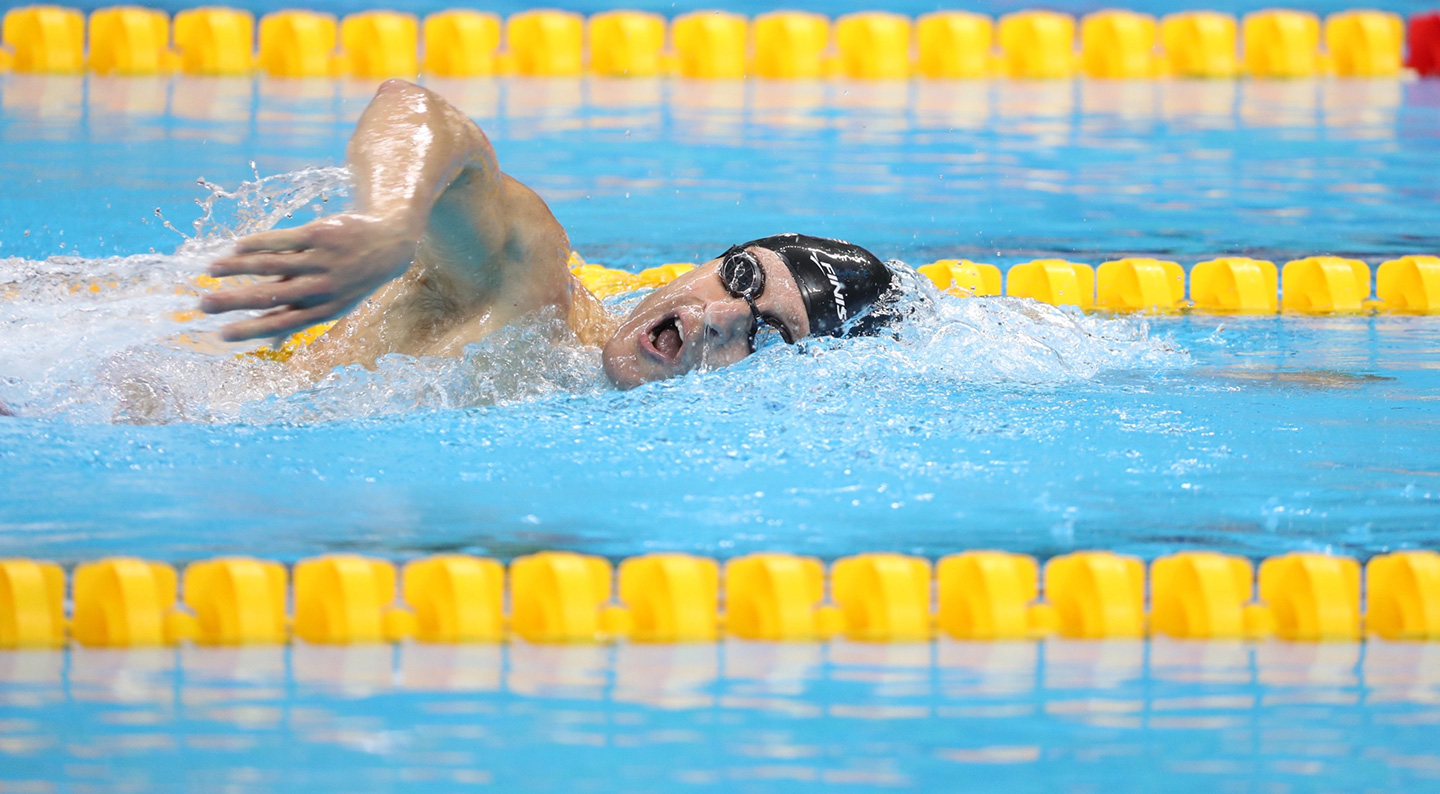 Just eight months after recovering from the bomb blast, Snyder competed in the 2012 Warrior Games, winning four gold medals in swimming and three in track and field. It was all part of an even greater healing process; just a year before, Snyder’s father had passed away, so he wasn’t able to see his son’s tremendous accomplishments. But his mother, sister, and brother were at his side, actually assisting and guiding him during his medal-winning events. 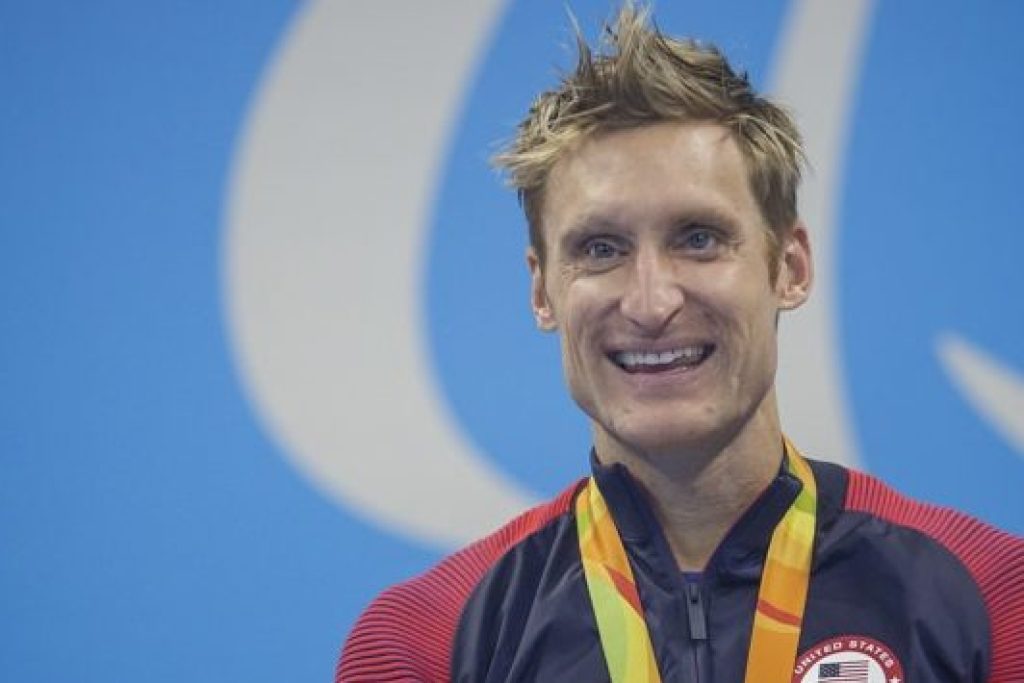 Snyder receiving one of his gold medals in Rio. (Joe Kusumoto)

Snyder would follow up his dominant performance at the ’12 Warrior Games with two appearances at the aforementioned Paralympic Games—London in 2012 and Rio in 2016—capturing a staggering five gold medals and two silvers in swimming. In between, he was also named an honorary torchbearer at the 2013 Warrior Games, which were attended by Prince Harry and inspired him to launch his own Invictus Games (that also marked the year Snyder would medically retire from the Navy). And he’s still at it: Snyder tells RealClearLife that he spends his post-work hours—he teaches at the Naval Academy in Annapolis, Maryland—at a local CrossFit gym, where he’s training to compete as a triathlete in the 2020 Paralympic Summer Games in Tokyo.

All award-winning feats of athleticism aside, though, Snyder tells us that his life is not without its frustrations: He spends two hours preparing for a 15-minute commute to work daily, which he’s been leaning on Uber to help with. But the ride-hailing service could soon be a worry of the past for Snyder. When RealClearLife connected with him, Snyder was at a summit in Athens, Greece, helping to launch a new advertising campaign for Toyota entitled, “Start Your Impossible.” It coincides with a companywide initiative to provide technologies like autonomous cars and robots to people with disabilities just like him. On display at the summit were advancements like Toyota’s human-support robot (HSR), which can fetch dropped items like TV remotes; iRoad, a new-age-y three-wheeler that is a hybrid car-motorbike and hugs turns like a downhill skier; and the upgraded iBot, a cross between a wheelchair and Segway.

Of course, there’s also tech that Toyota is developing that could be utilized by the blind or visually impaired, and that’s the stuff Snyder, who calls himself a “tech nerd,” is most enthused about. One piece of wearable tech that’s been on his radar came out of Toyota’s Project BLAID. Worn around the shoulders, the device uses built-in cameras to help blind or visually impaired people navigate spaces like offices or restrooms with greater easy. But Snyder’s future toy of choice is, without question, that autonomous car. “As soon as there’s a robot driving a Prius, you can bet I’ll be the first in line,” he says.

Even after reading about Snyder or watching him speak, it might still be difficult to fathom what it’s like having your eyesight taken away from you. So let Snyder provide you with the world’s greatest metaphor—one that he has firsthand knowledge of. “The Navy prepared me very well for blindness,” he says. It turns out that an important service EOD techs provide the Navy is inspecting the hulls of ships in harbor for IEDs or other explosive devices. The task is anything but easy, as Navy ships are hulking, iron beasts; and many of the dives were executed at night. “I was diving on a cruiser out of Mayport [Florida],” remembers Snyder, “and the rudder was two or three people wide, and in front of the rudder was this giant propeller, like, 12-feet tall.” He continues: “In the pitch-black of night, you’re only about 10 feet away from that propeller, but you can’t see it, because the water in front of you is silty, black, and there’s no light. So what you have to do is trace out the bottom of the rudder, find yourself on the rudder, and then take a ‘leap of faith’ and move forward to where you perceive that propeller to be. It’s a freaky and scary experience to jump out into the pitch black of night and hope that you find that propeller. Sometimes, people miss.” Now do you understand?

Three Atlantic Islands That Are Great Alternatives to the Caribbean
A Wordle Alternative for People Who Want to Play All Day Long
Doctors Publish Open Letter Condemning Joe Rogan's "Devastating" Impact on Public Health
Buy Your Next Home on a Cruise Ship With This "Luxury Residential Community at Sea"
Review: Keen's Hybrid Slip-On Adventure Shoe Is Casual Footwear Perfection
Could Sitting in Salt Caves Once a Week Be the Key to a Longer Life?

Products of the Week: Leica's New Gold Standard, Soup Candles and a Transient Whiskey Experience
How to Make Baby Back Ribs the Loro Way
Chicago’s Biggest TikTok Sensation Is a Dad Who Works for the Electric Company
The Blockchain Growing Pains of a “Capitalist Conservationist”
A Crash Course in the Semi-Legal World of Home Distilling
Why Pro Sports Still Can’t Overcome an Uneven Racial Playing Field
Behind the Revival of the Greatest Supercar Company You’ve Never Heard Of
The 7 Best Travel Destinations for Spring 2022
10 Sales to Shop During the Long Weekend

Could Sitting in Salt Caves Once a Week Be the Key to a Longer Life?
First Drive: The One Problem With Ford's Beastly Bronco Wildtrak
It’s High Time You Made Yourself a Pair of Custom Nikes
Morgan Wallen and the Twisted Economics of “Cancel Culture”