The Memphis Blues Brothers perform catalog with next generation musicians.

It’s Grammy Week in New York, marking the first time in 15 years that the city has hosting the Recording Academy’s annual awards show. Unsurprisingly, the industry has chosen to celebrate the occasion with a series of culturally spurious VIP events including pop-up, credit card-sponsored concerts and bespoke tequila tastings.

While St. Vincent performed an intimate set of new music at the Mastercard House, The Grammy Museum hosting a much more modest show in The New School’s Tishman Auditorium. Like the 2014 Take Me To The River film by director and program organizer Martin Shore (named for the Memphis tune first recorded by Al Green in 1974,) the program brought together legendary Memphis blues and soul singers William Bell, 78, and Bobby Rush, 84, to perform songs from their untouchable Stax Records back catalogs with a younger generation of student musicians. 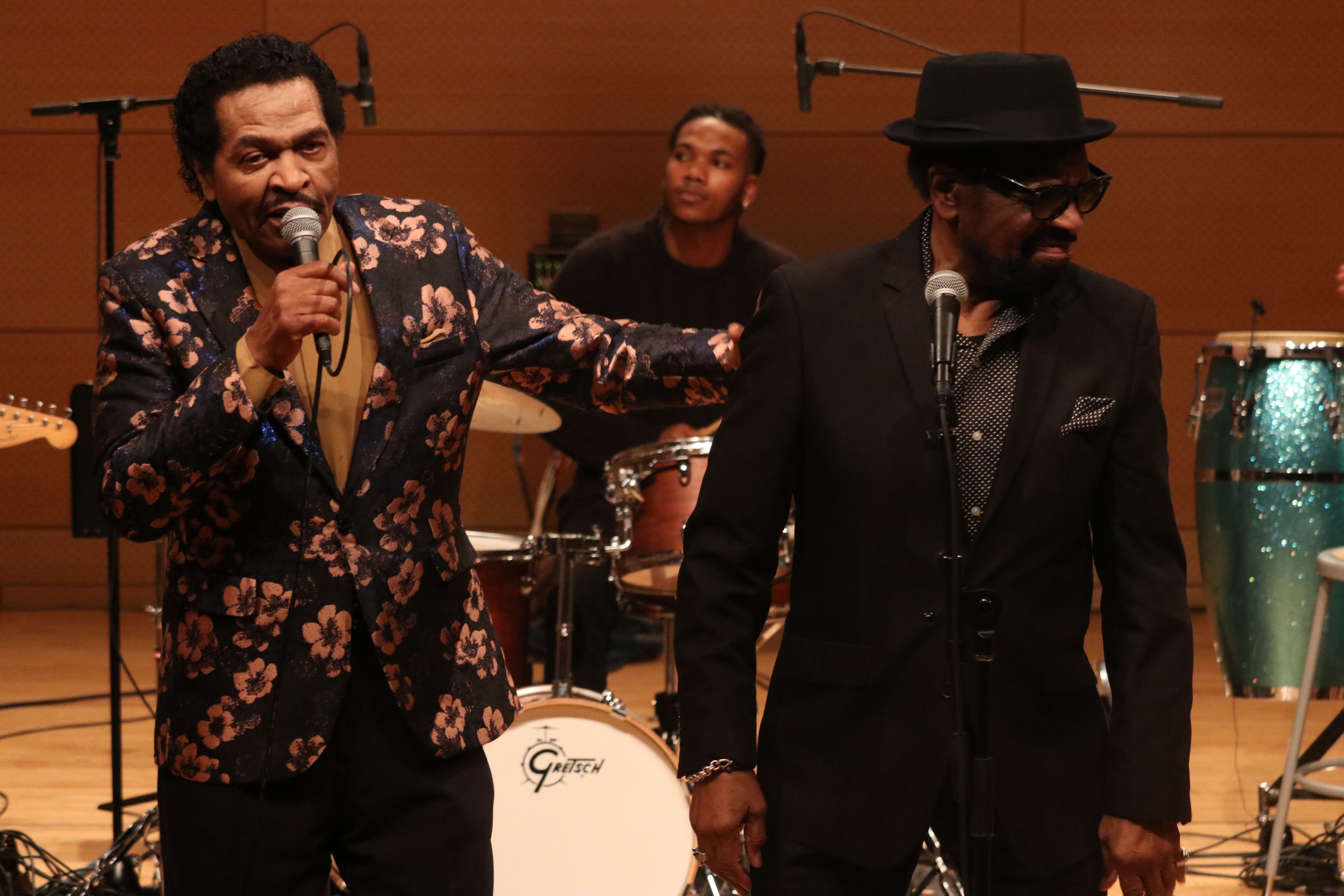 Part celebration of what made the long-boiling Memphis musical stew so spicy, part educational exchange, the two men spent a week rehearsing with students from both The New School and the Bronx’s Renaissance Youth Center’s “Music With a Message Band” for the performance. What transpired was a celebration of stone cold classics with the voices that gave them life and legacies come full circle, as students at the start of their creative careers connected with industry veterans for a heartfelt, intergenerational musical exchange.

“Because of technology, so many students are making music alone,” Keller Corker, Dean of the New School for Jazz and Contemporary Music, said earlier that afternoon. “They’re at home by themselves, and when you bring them into the studio they go, This is how that happens. Then they create the next generation of music in the environment that is most productive.”

While working with Rush and Bell for a week, the room became truly communal. During sound check, both men went out of their way to personally greet each of the students playing back up at their respective position on stage, complementing their playing styles and occasionally giving them constructive feedback. 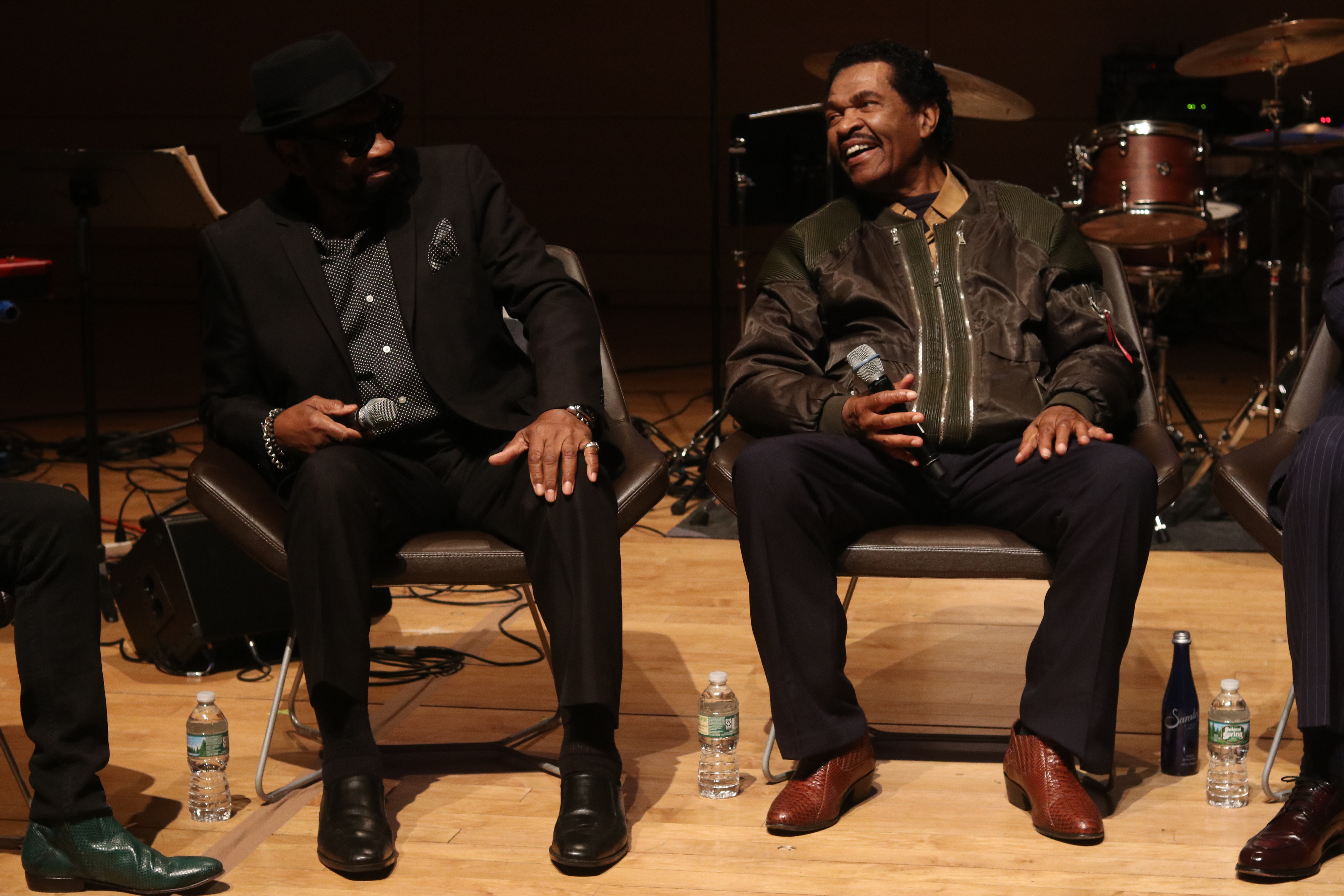 The only moment of frustration on behalf of the singers came when Rush shared his curmudgeonly disbelief that the blues was often stigmatized as passé by younger generations of musicians. Interrupting that evening’s performance of the classic “Yes We Can Can”, which was meant to tease director Shore’s upcoming sequel, Take Me To The River: New Orleans, Rush instead busted out in a passionate a solo about his woman running away with the garbage man instead.

“If you don’t like the blues,” he said earlier that afternoon, “it means you don’t love your mama.”

Rush, like Bell, won his first Grammy last year. “I still have a bruise from where I pinched myself,” he said with a laugh after acknowledging that the winning Porcupine Meat was the 373rd record he’d cut in his 60+ year career. “Better late than never.”

Just as the program has toured the country since the film’s release to partner with aspiring college-age musicians and at-risk youth centers, the Take Me To The River film centers around the communion of different ages and races. Together, the kids and the legacy singers bring to life songs like the night’s titular number, delivered that night as a rousing set closer with students from both schools coming together in elevated spiritual consciousness. Stax Records existed as an interracial, egalitarian oasis in a fiercely segregated 1960’s Memphis, a place where talent cut above all, and this program that Martin Shore spawned from this film seeks to similarly practice the core values that made Stax “Soulsville, U.S.A.”

Founded in 1957 as Satellite Records and officially born as Stax in 1961, the label went on to amass a roster of artists who immediately cemented their place in the storied canon of indigenous American art — Aretha Franklin, Isaac Hayes, Sam and Dave, Booker T., Wilson Pickett, Albert King, and Otis Redding, just to name a few.

It’s with an understanding of this history that Take Me To The River’s greatest risk proves so rewarding. Handled with this love and attention, hip-hop artists like Snoop Dogg and singers like William Bell come together in the film to reimagine the classics in renditions that manage to sound like less of a modern sonic blasphemy and more homage to Stax’s spirit of intergenerational exchange. A 12-year-old kid Memphis kid named lil P-Nut spits verses over “Trying to Live My Life Without You” on the breaks where Stax great Otis Clay, who has since passed, sings in earnest. The late legend Bobby “Blue” Bland covers Roy Ayers’ “Ain’t No Sunshine” with rapper Yo Gotti; in these moments, Take Me To The River’s covers illuminate the rich legacy of Stax more than any anonymous, decontextualized song sample could ever possibly capture. 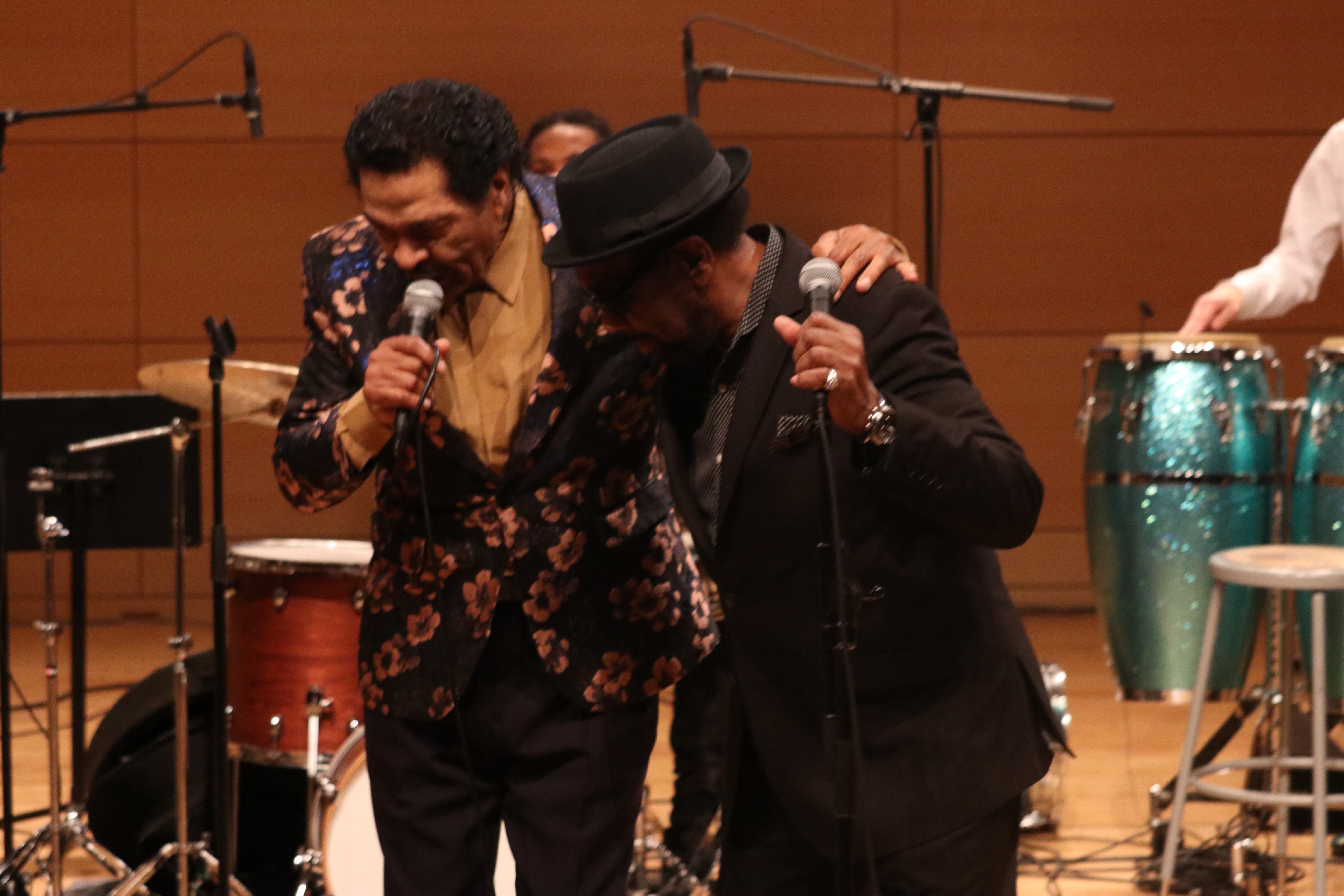 “We have to thank these guys for what they done,” Snoop says of the Stax giants like William Bell whose music he grew up on in the film. “They cut down the trees so we can walk on the lawn.” Just as B.B. King played the role of surrogate father to William Bell just the same, Bell and Rush now tour the country and pass their performance wisdom on to the next generation.

“If you want something to last, you’ve got to pass it down,” Bell said that afternoon.” We learned that in working with the rappers in another genre, we were telling the same story. The same thing was happening, we were just delivering it in a different way.”

Bell best telegraphed this exchange in the evening’s most tender moment, taking the stage for a slow and measured rendition of his seminal “I Forgot to Be Your Lover” with the New School students backing him up. Extending the song well past its recorded run-time, he hung on dearly to every delicate syllable as the band brought down its volume to match, only to rising back up to a swell in perfect union. 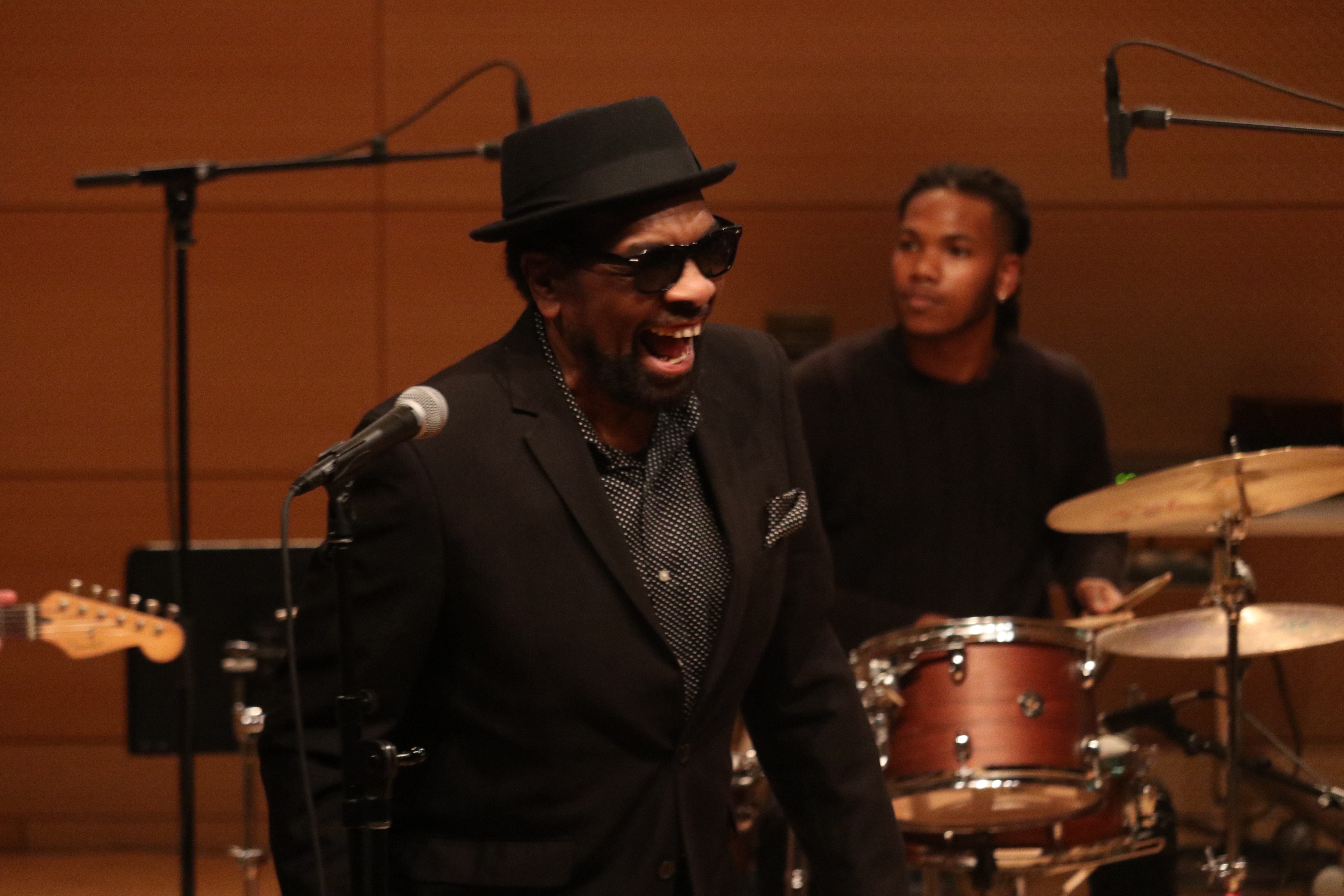 “It’s a generational bridge of mutual respect, immediate and omnipotent,” director Shore said during the panel. “Because now we’re recognizing each other for who we really are.”

Though Bobby Rush is a Louisiana native, Stax acclimated him to a community that cared more about his chops than what color he was It was an environment that existed nowhere else at the time. He remembered once passing through Roberts, Illinois en route to Chicago with Muddy Waters in the ‘60s to play a show. 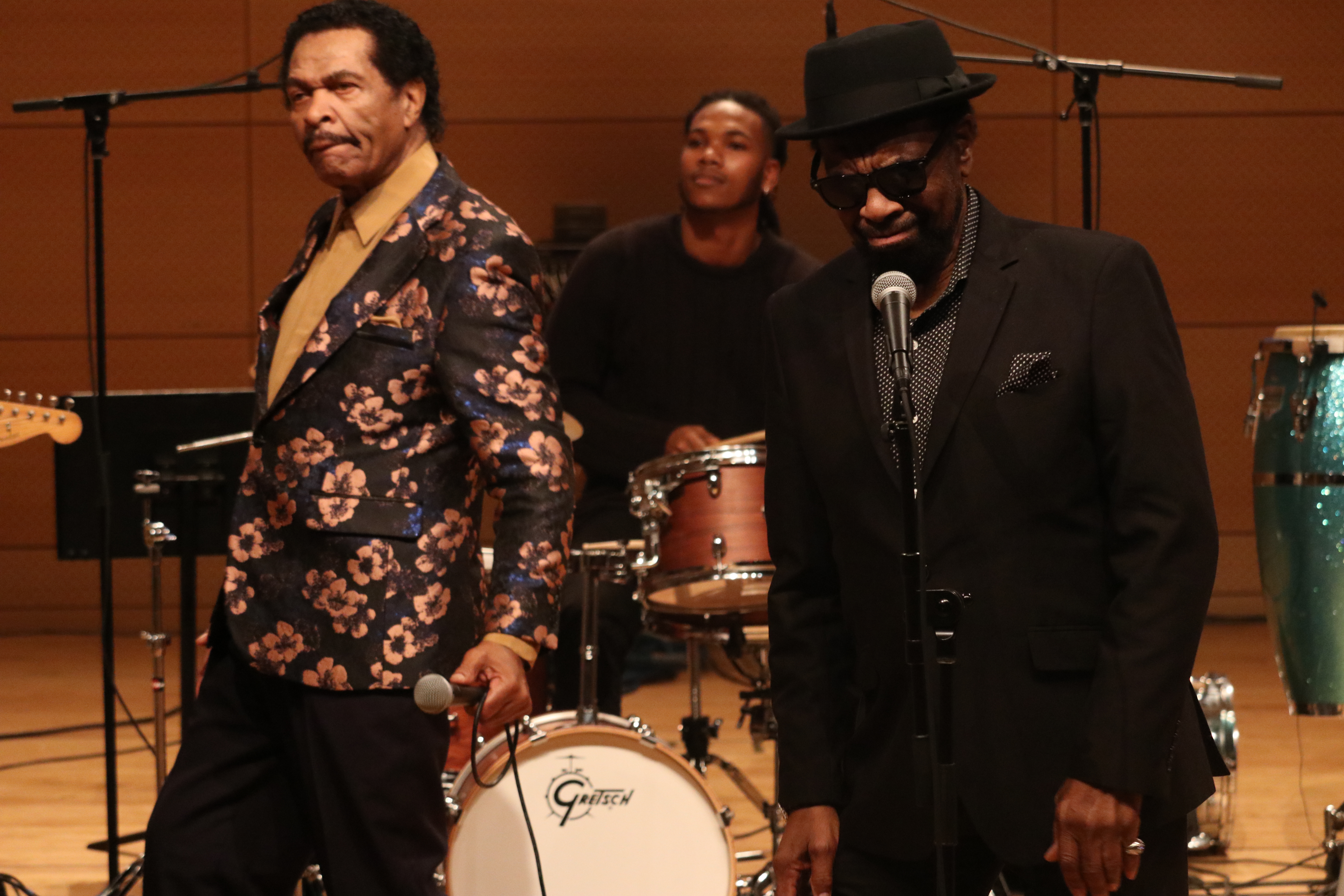 “We played behind a curtain, where they wanted to hear our music but they didn’t want to see our faces, he said. “Every time the music stopped, you could peek behind the curtain and see how giddy they are.”

Al Bell, the former Chairman of Stax and recipient of The Recording Academy’s prestigious Trustees Award, emphasized during the panel how much he was reminded of segregation immediately after leaving the Stax studio. Players and staff would often gather at the Lorraine Hotel, he says, as it was the only non-segregated spot to hang in town. When they weren’t working, it was a place of communion- Stax family Steve Cropper and Eddie Floyd even wrote the hit “Knock on Wood” there.

The Lorraine, of course, would become infamous as the location where Dr. Martin Luther King was murdered. Al Bell served was a member of the Southern Christian Leadership conference with Dr. King, before coming into his time at Stax, and he still contributed financially to the organization. 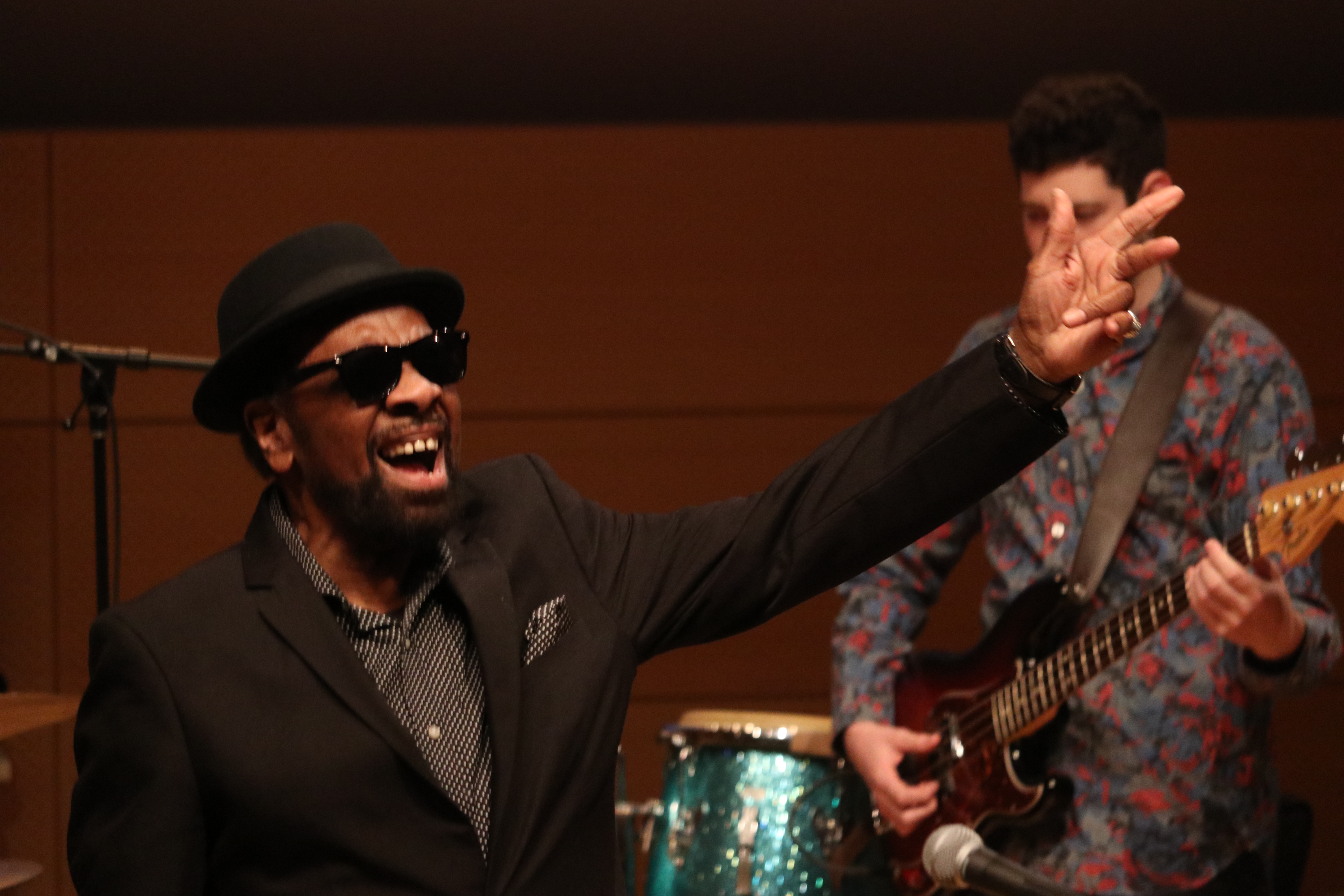 “He was coming to Memphis and meeting with the sanitation workers, the focus in the media was on that,” said Bell. “What wasn’t being talked about was the number of people signing up for the march. There were more whites signing up than blacks, and when I saw that I said, ’Wait a minute, this is gonna be a problem’. It’s alright for Dr. King to March on Washington with 500,000 black folks, they let that happen no problem. But for him to come In there with hypothetically a million white folks and 250,000 black folks would create a problem.”

“I told him when he came in to march with the sanitation workers, ‘Doc, I’m writing a song for you’. The song was called “Send Peace and Harmony Home.” I didn’t have it in my mind that ‘home’ meant the spiritual world.” 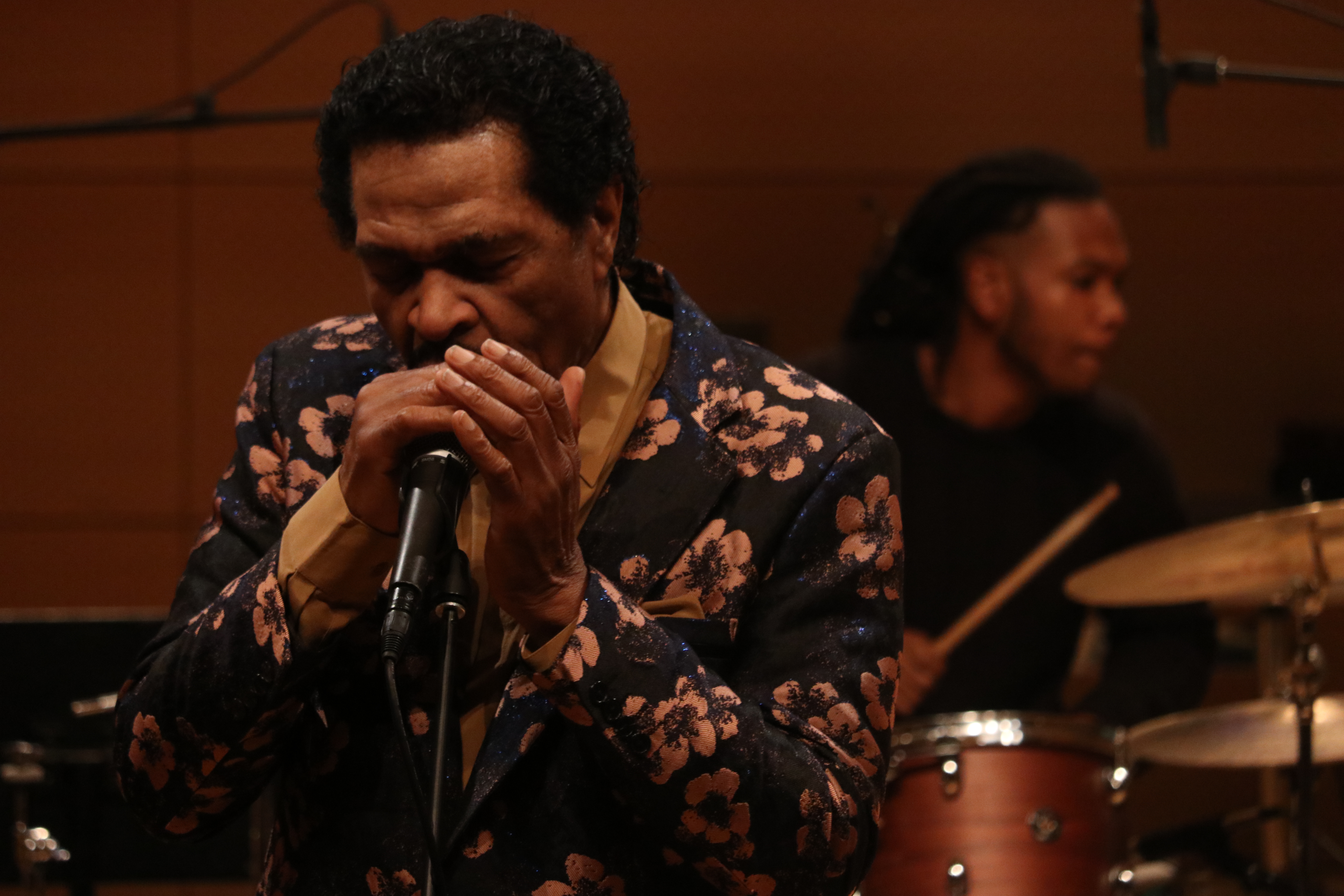 Bell brought Booker T. and Eddie Floyd to work on the tune, which they record in the Stax studio with a Shirley Walter on vocals. Walter just couldn’t nail the vibe though. Then, when the 11th tape started, someone opened the studio door to tell Bell that Dr King had been shot. Walter started crying, Bell let the tape roll, and the recording was captured at the very moment after Dr. King was murdered.

Hearing these stories, whether in song, on screen or in person, let the legacy of Stax hold a mirror to our presently divided world and offers a chance for redemption through musical healing. It also reminds us how ideas about true equality are only as real as the next generation who puts them into practice. 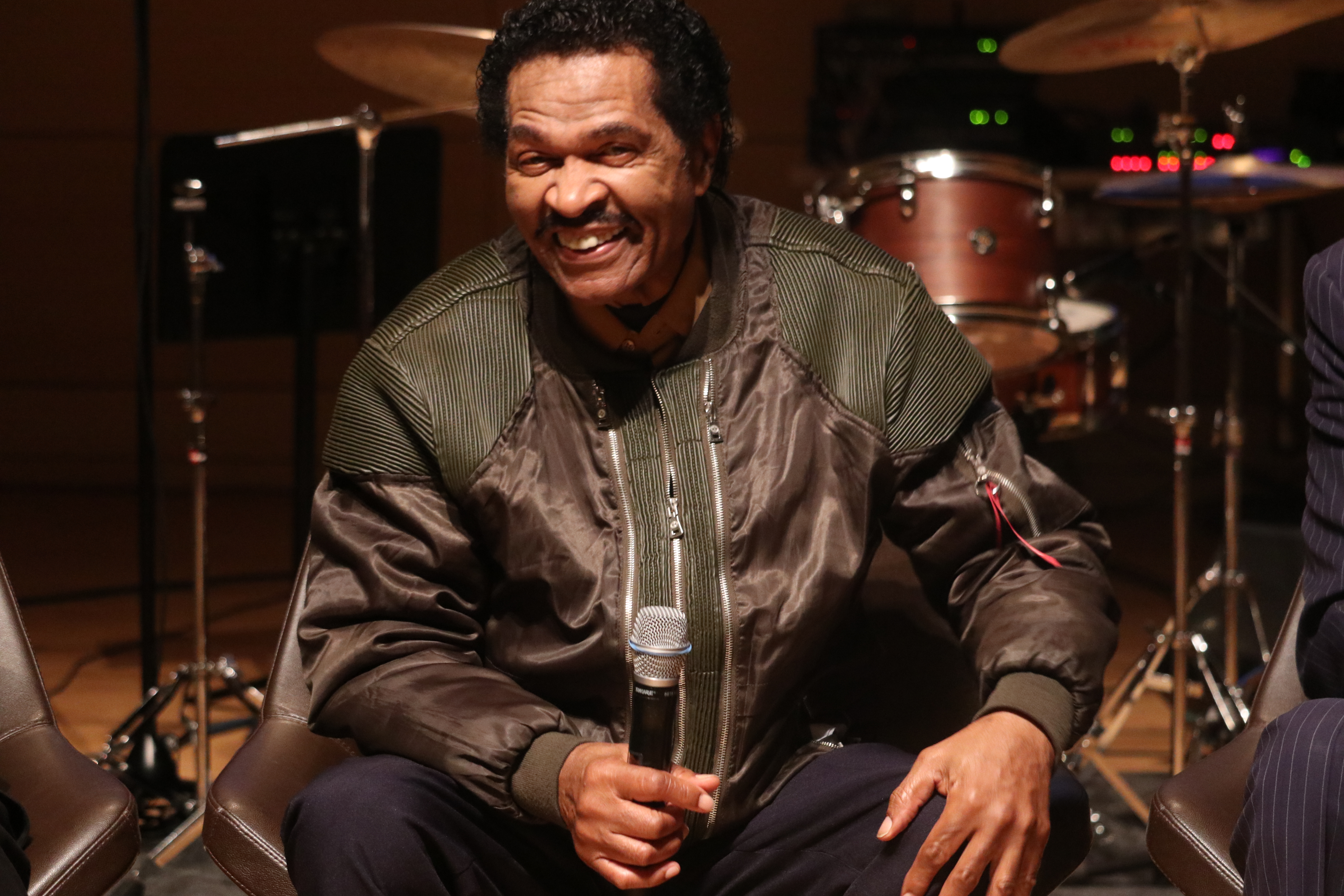 “As musicians, we can’t help but be transparent, we need to communicate,” said Shore. “And that commitment to communicate allows us to cooperate and collaborate.”